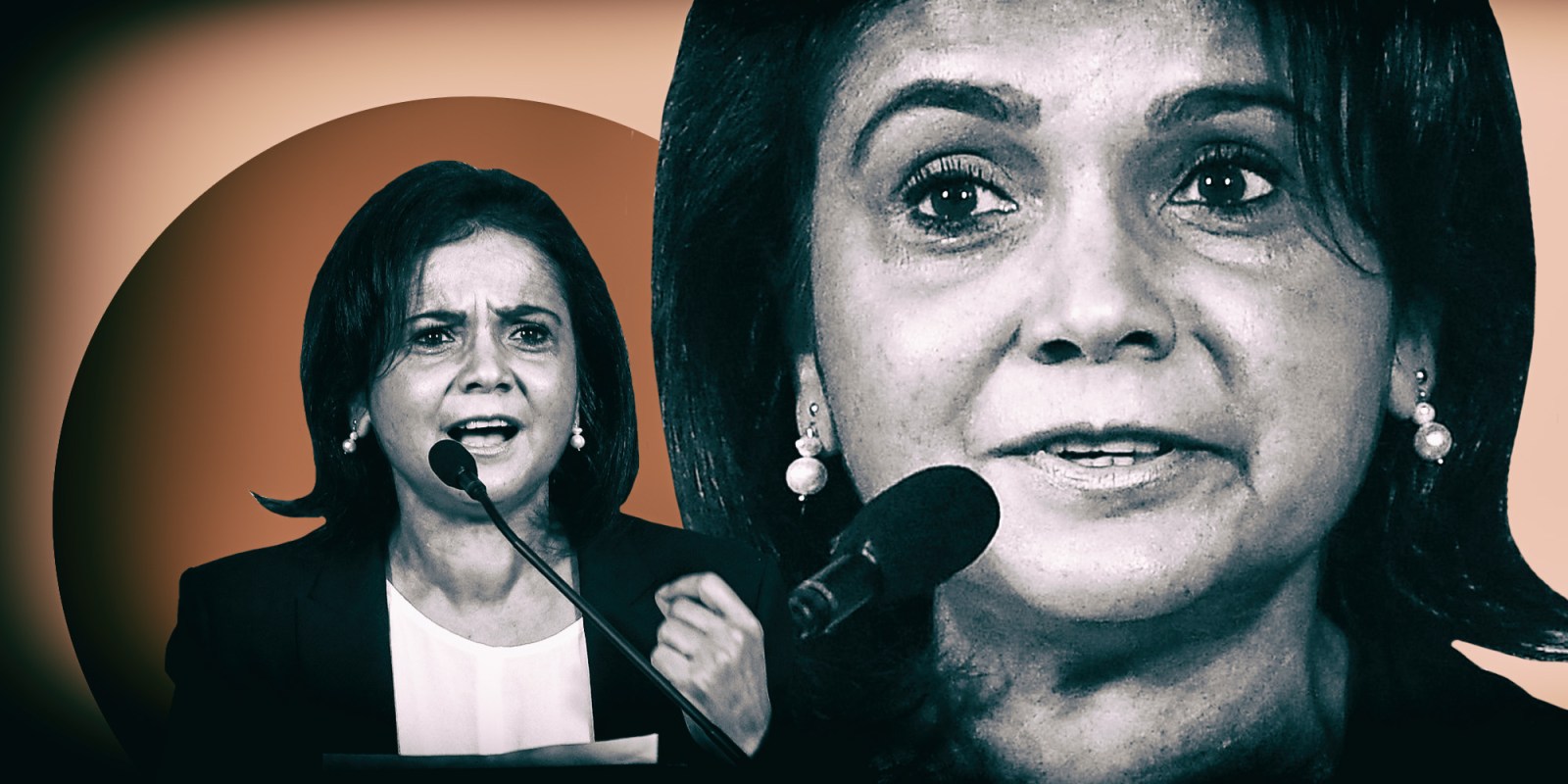 Two years of suspension on full pay, R50,000 in leave pay during that time and now, another month’s salary plus an order for reinstatement: Jackie Lepinka appears to be running rings around the National Prosecuting Authority.

The National Prosecuting Authority (NPA) has suffered a blow in its case against Jackie Lepinka, a senior secretary suspended in the wake of allegations that she leaked information to Bosasa in exchange for monthly bribes.

The NPA has been ordered to allow Lepinka to return to work on Thursday, April 1, and to pay her compensation of just over R70,000 in lieu of a full month’s salary within 30 days. The General Public Service Sector Bargaining Council handed down the award in early March after Lepinka lodged an unfair labour practice dispute.

The bargaining council found that while the NPA had compelling reasons to suspend Lepinka on two different occasions following the leak claims, her continued suspension was unlawful.

This is because there is, effectively, no current disciplinary case against Lepinka after charges against her were dismissed in October 2019. This is also despite the fact that a labour court review of that decision remains pending.

Lepinka previously worked as an assistant to former Correctional Services Commissioner Linda Mti, who is currently on trial for Bosasa-related fraud and corruption. Lepinka joined the NPA in 2006 and later worked as the PA to the controversial former deputy director of public prosecutions, Nomgcobo Jiba.

Lepinka was suspended – on full pay of R821,000 a year – mere days after Shamila Batohi arrived as the new National Director of Public Prosecutions (NDPP) in February 2019.

That suspension followed on the bombshell revelations of former Bosasa COO and now fraud and corruption accused, Angelo Agrizzi, that Lepinka had allegedly been paid R20,000 a month by Bosasa in exchange for information on the NPA’s investigation into the company.

While that swift suspension was widely commended as a sign of things to come under the then new NDPP, the case against Lepinka has been anything but (South Africa: False-start hassles for NPA’s bid to tackle alleged Bosasa mole).

Her first suspension was prescribed at the end of May 2019 before the NPA could complete its investigation into Agrizzi’s claims at the Zondo Commission.

The NPA suspended her a second time days later (June 2019), hoping to garner more evidence from the Zondo Commission or the Anti-Corruption Task Team.

It eventually ran a disciplinary hearing, but in October 2019 the chairperson of the hearing, having expressed concern about the NPA allegedly having failed to conduct a thorough investigation, dismissed the charges. And, it has now emerged that the disciplinary hearing in question also had little to do with Agrizzi’s allegations.

In fact, Lepinka was charged over an alleged stolen laptop, a case that dated back to 2014 when the Hawks raided her home.

The chairman of the NPA’s internal disciplinary case dismissed the stolen laptop case against Lepinka in October 2019. This was on the basis that the NPA had allegedly merely resuscitated the 2014 case but had failed to produce new evidence as it had previously withdrawn the case against Lepinka.

The laptop, it was accepted, was a work-issued device that was returned to the NPA as far back as 2014.

Regardless of the October 2019 win, Lepinka did not return to work because the NPA filed an application to review this ruling at the labour court and sought to use this as a reason to keep her out of the office. As a result, Lepinka continued her paid suspension through to the recent bargaining council hearing that has now paved the way for her return to work.

Her lawyer, Raphepheng Mataka, declined to comment on the matter but confirmed that his client is scheduled to return to work on Thursday, 1 Arpil. He also confirmed that Lepinka is scheduled to appear in court in connection with the same alleged stolen laptop matter in June. Lepinka remains out on warning and has not been asked to plead in the criminal case.

Lepinka, during an arbitration hearing held via Zoom, argued that she has been at home for several hundred days and that during that time she has been unable to provide any service to the NPA, to the detriment of taxpayers.

She accused the NPA of acting maliciously in its handling of her case and said the ongoing case had severely affected her health.

NPA spokesperson Sipho Ngwema says the arbitration award will be studied by the NPA’s labour unit once received. He said it was important to note that it has no effect on the criminal case Lepinka currently faces.

Lepinka, who had access to highly confidential NPA documents during her time at the NPA, was suspended a few weeks after being implicated by Agrizzi during testimony at the Zondo Commission. Agrizzi had testified to a list of NPA material allegedly bought by Bosasa, including one labelled “Minutes (NPA/Extended Ministerial Meeting) dated 9 March 2010. The secretary of the meeting is listed as J Lepinka. The information contained allegedly relates to a briefing to then justice minister Jeff Radebe by then NPA head Advocate Menzi Simelane.”

There has been no further evidence regarding Lepinka’s alleged Bosasa ties at the Zondo Commission.

In 2016 the NPA, by then headed by Shaun Abrahams, paid Lepinka about R100,000 following an apology over how she had been treated following the arrival of Mxolisi Nxasana as the NDPP in 2013. DM 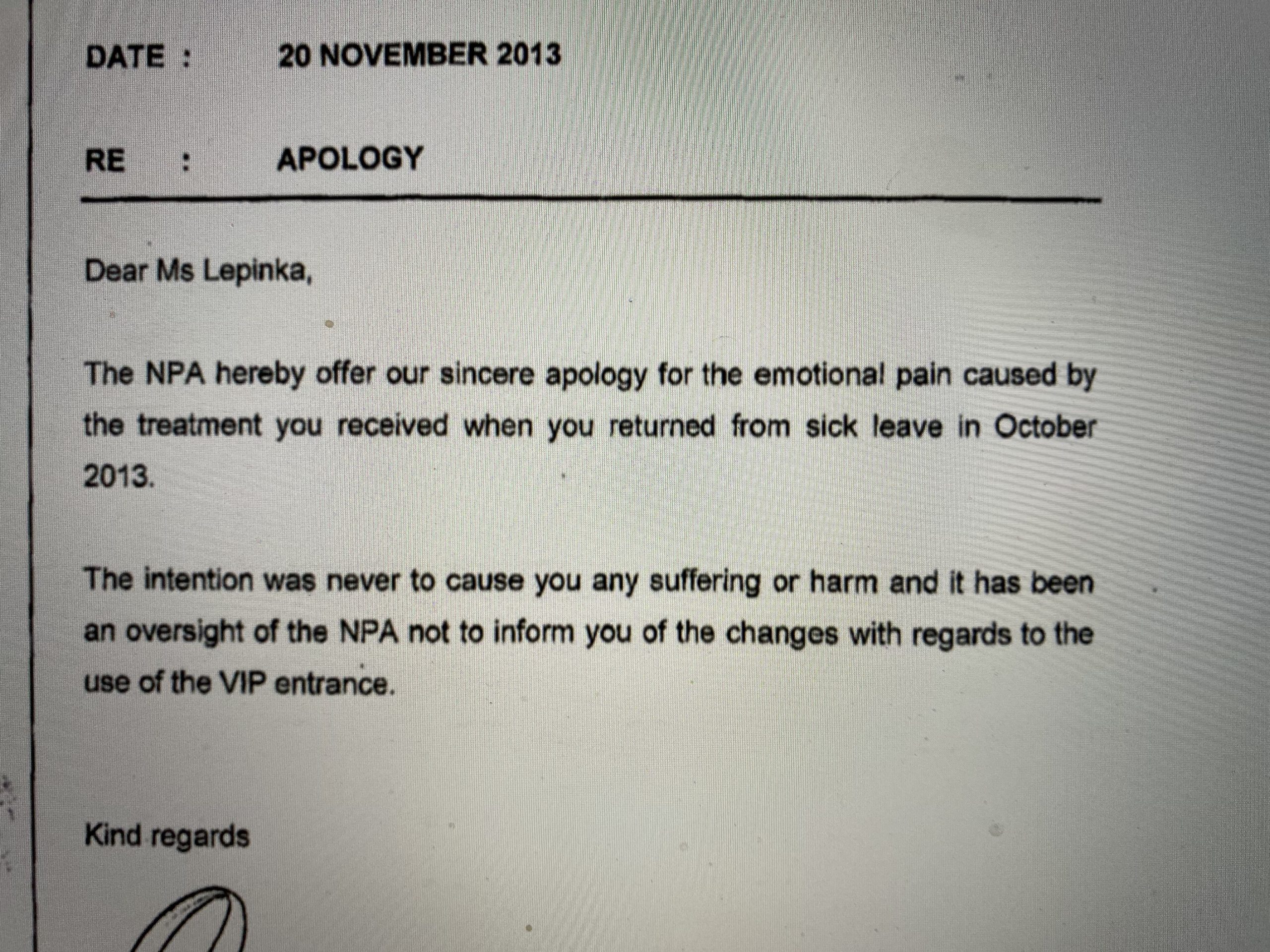