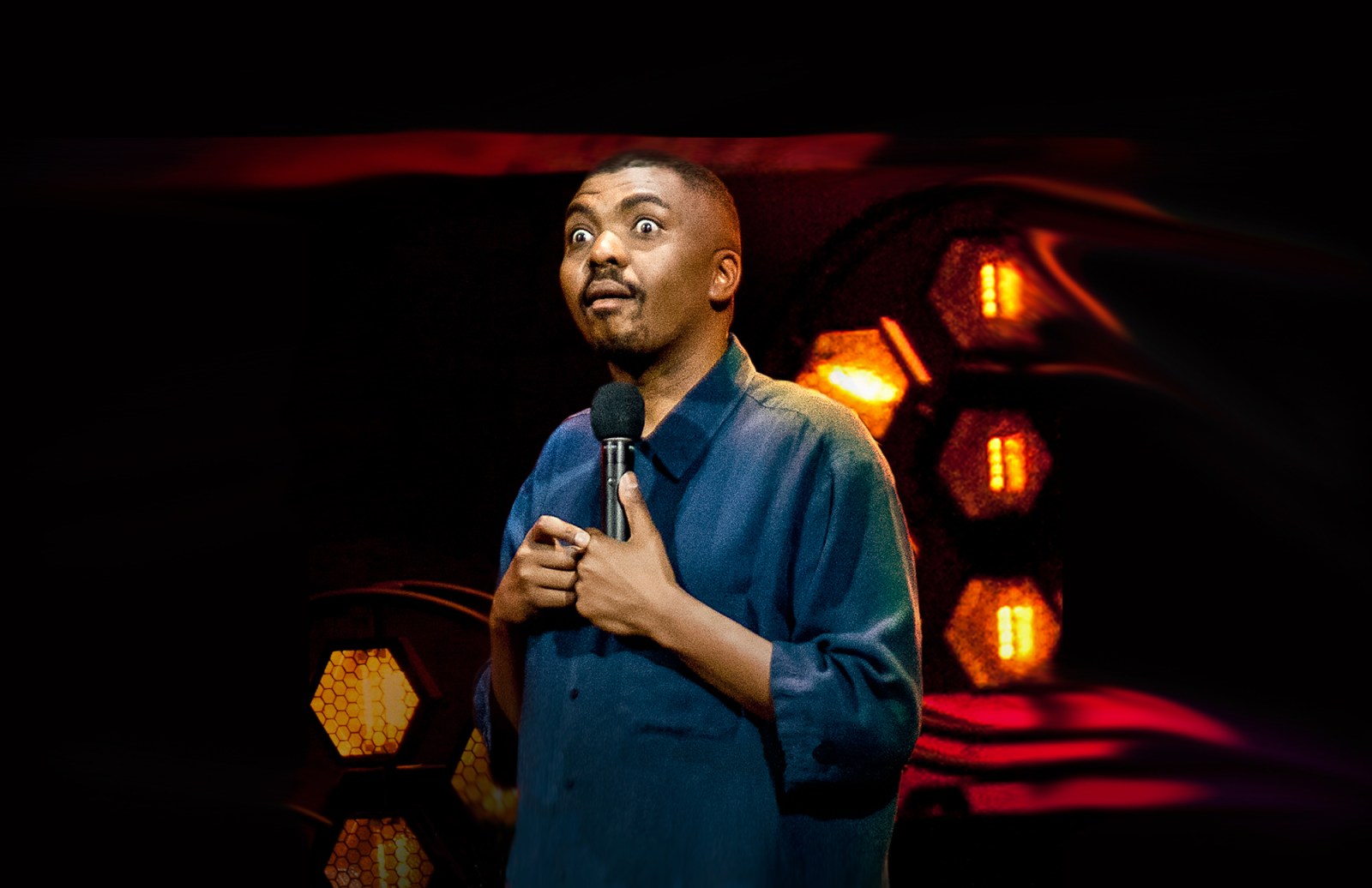 Loyiso Gola casually pokes fun at the outdated lessons we grew up with in ‘Unlearning’, the first African solo stand-up show on Netflix as of March 23.

Loyiso Gola has just become the first African with a full solo stand-up comedy hour on Netflix. Gola had already landed a Netflix gig, but this show, also the first African Netflix original of 2021, is a landmark in his career.

The show is called Unlearning. It first debuted at the Edinburgh Fringe festival in 2017, but it was filmed for the Netflix special under lockdown conditions in front of a small live audience at the Zeitz MOCAA in Gola’s hometown, Cape Town.

Before Trevor Noah joined The Daily Show, Gola was the original “South African Jon Stewart” – he churned out 12 seasons of Late Nite News With Loyiso Gola on eTV and eNCA. But unlike his fast-talking larger-than-life news anchor persona, the Loyiso Gola of Unlearning is a chilled laconic charmer.

Gola performs so comfortably in Unlearning that you can almost forget you’re watching a routine – it feels more like being told anecdotes by a friend who just happens to be funnier than you. The small intimate audience is as perfectly suited to his cool, casual demeanour as the loose drooping suit he wears, which accentuates his cavalier body language as he traipses about the stage.

It’s not a flashy show. He doesn’t play the court jester, or a hype guy, excitedly firing off arbitrary one-liners. Watching an insecure stand-up comic can feel like watching an addict who’s willing to do anything for their next fix of thigh-slapping laughter, but Gola is an experienced satirist who oozes confidence. Your thighs are unlikely to get much slapping, but your time won’t get wasted by fleeting gags – instead, he tells stories, and more often than not they lead to a point.

Gola starts the show by placing himself on the generational fence in a South African context. He mocks the ignorance of non-South Africans who ask him where he was when Nelson Mandela was released, even though he was only six years old at the time; separating himself from that era and relating to younger South Africans. Yet he goes on to tell several anecdotes about growing up under apartheid, ingratiating himself to an older generation of South Africans as well.

The show is called Unlearning because it focuses on the behaviour and perspectives that we learn as a child and have to “unlearn” as we become adults, particularly our attitudes towards identity. “At 37, there are things I’ve got to unpack about my life – everybody’s got to do it right?”

Gola compares getting older to being forced to download a software update on your phone even though you’ve gotten used to the current operating system. He demonstrates the way we form arbitrary associations as children by recounting how watching TV as a boy led him to believe that white people never finish their breakfasts.

He pokes fun at the silliness of oft-times self-imposed stereotypes like “white people can’t dance” and “black people can’t swim”, and asks, “How much of your life is just living other peoples’ expectations of you?”

Though he comes on stage with a massive backdrop of a satirical depiction of himself donning a pompous cravat and a powdered wig, not once does he use the word “decolonisation” and risk being dismissed by reactionaries as another millennial warrior of ‘wokeness’. Surprisingly, speaking calmly and without malice, he manages to opine about a broad swathe of controversial subjects in an entertaining way without being especially offensive.

His most-targeted criticism is of religion’s reluctance to move with the times. He argues that it’s crazy that in 2020, people still justify conservative ideologies by quoting the bible. “Man, that was written 2,000 years ago – they didn’t even have sandwiches!”

It’s not just the big things that Gola thinks we need to unlearn; it’s any tradition that we accept blindly. With the bursting exuberance of someone who has just discovered the Internet, he gives us a fun-fact history lesson on how every aspect of global culture, from engagement rings to lobster dinners to female beauty standards, have been shaped by marketing exploits.

Often, a good comedian is someone who is able to tap into people’s shared experience, pointing out the absurdity and hilarity of our behaviour. With a natural understated familiarity, Gola urges us to laugh at and unlearn the out-dated lessons we grew up with.

He manages to be political and opinionated while still keeping things pretty light by weaving in adorable anecdotes of his first encounters with wealth, and wild tales of his experiences with drugs. Admittedly, the latter has been done by a thousand comics before him, and it gets a little stale, but it all ties into the narrative in one way or another, and ensures that there’s something for everyone. Unlearning has an intellectual message but it’s not a lecture, it’s fresh laid-back wholesome comedy. DM/ ML

Unlearning is available in South Africa on Netflix from March 23.
You can contact This Weekend We’re Watching via [email protected]