HEART OF THE KAROO

An invitation to dinner in Cradock 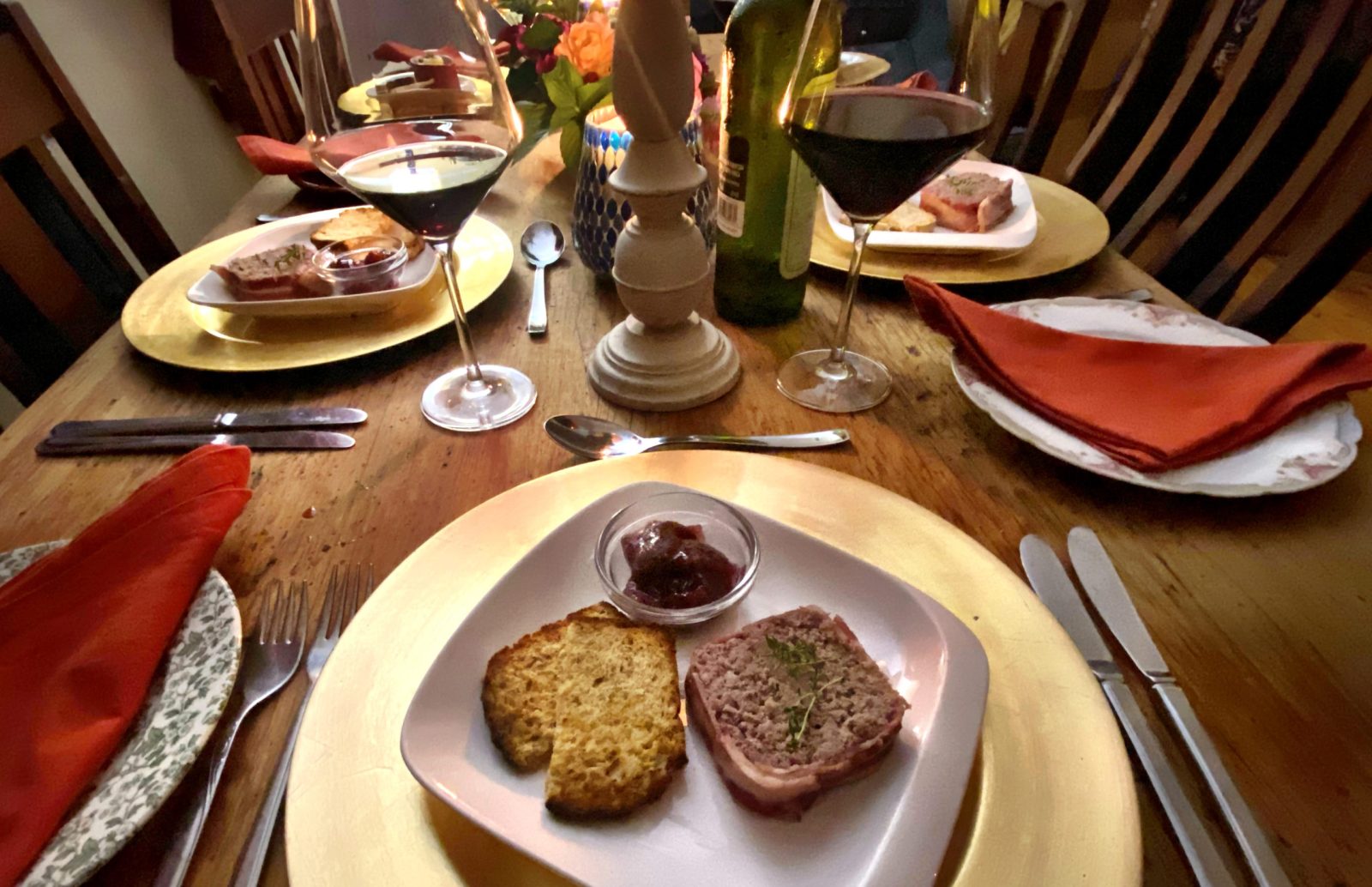 ‘Come visit,’ said The Foodie. This is an offer too good to refuse even if it is on the other side of the country. Road trip anyone?

This is a true story. Some identities have been protected due to a modest reluctance to be in the limelight, and their wishes are to be respected. The rest is how it happened.

It all began with an email from TGIFood editor Tony Jackman, aka The Foodie, to visit him and Diane Cassere (The Foodie’s Wife) in Cradock. This is an example of the modern miracle that is Daily Maverick and how we work so marvellously and seamlessly from opposite sides of the country: me in Cape Town in the Western Province, he in Cradock in the Eastern Cape. I gave it some thought, asked some pertinent questions about the weather (it’s either extremely hot, or extremely cold), and decided it would require a substantial road trip across the Karoo; two weeks in all, returning along the Garden Route.

I duly arrived in Cradock on the appointed date, via Montagu, Oudtshoorn and Graaff-Reinet, meeting many interesting people along the way and slowly but surely slipping into speaking more Afrikaans than English. The Foodie and The Foodie’s Wife – both of whom I’ve known for decades due to our joint history at once-fine newspaper titles – welcomed me with appropriately virtual hugs and, after showing me to my room, poured the wine. The Main Event was to be the following night, a special feast shrouded in mysteries, secrets and surprises. All I knew was there was a saddle of Karoo lamb, and for most of the afternoon I would be confined to my room so as not to spoil the great revelation.

Cradock was without electricity when I got there, not due to load shedding, but because of an exploded cable or some such, which apparently took the entire day and most of the night to repair. We’re a hardy bunch, us South Africans, so off we went to the Victoria Manor – which has its own power – for dinner in the red-painted Albert room, one of The Foodie’s favourite places in the world. It’s easy to see why, with its warm furnishings, candlelight, sweet-smelling roses, and genteel atmosphere recalling the bygone era of the 19th century.

Here, a traditional Karoo buffet is served, between starters and desserts brought to the table. We tucked into roast lamb, venison pie, roast potatoes and yellow rice with raisins (some people think one starch on the plate is enough but I’m crazy about rice and potatoes together; just a bit of a slut for the carbs I think), some other vegetables, and gravy of course.

There was quite a bit of wine, and even more when we got home, warmed by a kakpraatvuur in the brazier, so when the lights finally came on we all cheered in unison, and celebrated with another glass of wine.

Understandably, I felt a little fragile the next morning. The Foodie had plans though, whisking me off to True Living, a restaurant owned and run by Lani Lombard, who was a My Kitchen Rules SA season one semifinalist with her daughter Louzel Lombard Steyn, who is also a writer for Tony’s TGIFood. It is one of many unexpected gems in Cradock, which is a town of contrasts, from wide potholed roads and disregard for stop signs, to unassuming storefronts which reveal tranquil spaces only metres away from mild chaos.

True Living uses some produce from its own family farm, Waterval, and had just the breakfast to sort me out, including its own homemade cheese grillers made from warthog and beef. There was no holding back. The Foodie’s Wife later asked what we’d had, and I said: “Everything.” This included bacon, eggs, the famous cheese griller, toast and jam, tomato relish (hold the All Gold), with the optional extras of saucy lamb kidneys and fries. Wonderful fries, crispy and golden, soft inside. I never miss an opportunity to have fries with breakfast.

“Apparently I make the best chips,” said The Foodie. “Yeah?” I replied between mouthfuls, “says who?” His wife and daughter, he answered. And those are really the only opinions that matter.

Despite having a full afternoon of cooking ahead of him, The Foodie whisked me off on a short tour of Cradock; I was later dispatched to KarooBrew, co-owned by Liza Badenhorst and Neville Prinsloo, for a coffee cupping, something I can never say out loud without being childish.

Cupping is how the characteristics of different beans are gauged, and determines how they are blended. Like with wine, experienced tasters can detect delicate flavour profiles, so Badenhorst guided me through grounds from Brazil and Ethiopia, encouraging me to slurp from the spoon, and then the house blend, Jongo, which is a combination of the two. KarooBrew also blends its own After The Rain (Brazil/Honduras) and in Badenhorst’s opinion a great morning coffee which doesn’t slap you upside the head; and Plaasjapie (Uganda/Ethiopia). “100% Africa beans because only Africa can produce a proper plaasjapie,” she explained.

Back at home, the kitchen was off limits for me while The Foodie, assisted by The Cowboy (a gentleman of note, who brought the “ladies” gifts of nougat), peeled and chopped, whisked and blended, sliced and stuffed. If my passage through their domain was unavoidable I had to yell “coming through!” and blinker my eyes with my hands as I scurried past.

“What time is dinner?” I wanted to know, because the aromas permeating the house were tantalising. “When it is ready,” said The Cowboy, calmly. Okay, what time will it be ready, I countered. At 8pm, said The Foodie. The Foodie’s Wife, guest The Contractor, and I watched that clock with beady eyes, heckling from the courtyard where we were taking pre-dinner drinks. The Cowboy had donned his evening attire – boots, hat, bolo, gold cufflinks, fringed waistcoat. I was charmed, although distinctly underdressed. “I always strive to be the most overdressed person in the room,” he reassured me. The table in the front room (where, contrary to neighbourhood belief and gossip, there is not a new restaurant being opened) had been set beautifully by The Foodie’s Wife, with flowers and candles. Finally we were summoned; The Foodie poured the wine (Boplaas Tinta Barocca I had picked up on my journey), the starters were served, and The Contractor said grace before we began eating.

The starter was the Big Surprise. It was a French-style terrine of scrub hare, shot by The Cowboy on his farm and deboned by The Foodie, marinated for a day and a half in Cognac, wrapped in bacon, with pork for the necessary fat and a hint of chicken livers, and the loin in the middle, accompanied by jam made by The Foodie with Evita (Parisian) red figs given to him by his friend Heyla Mayer, and toasted slim slices of The Foodie’s Wife’s herbed buttermilk bread. I was enchanted, not only by the unusual dish created for the occasion, but the earthy story of its local ingredients.

The main course was classically traditional perfection, at its simplest, a bord kos – meat, potato and two veg – but more than the sum of its mere parts in terms of technique, style, the magic ingredient of love; love for the food, the produce, love for the undertaking, love for those being fed. The saddle of lamb was thick sliced, tender, with a lovely layer of fat, its stuffing of spinach and black and green olives spiked with lemon zest and thyme. There were buttered green beans and a purée of pumpkin, which The Foodie had seasoned with wilde-als (wild wormwood) sourced from a Nieu-Bethesda riverbed, and crispy hasselback potatoes. The gravy had been cooked with lamb stock made from the bones of the saddle.

For dessert there was something else I’ve not had before: quince. In this case, baked in a tart of crumbly, buttery homemade sweet shortcrust pastry, with a dollop of whipped cream, a triumphant conclusion to a very special experience. It was a fitting gathering to mark almost a year since our world was turned upside down, with like-minded food enthusiasts, sparkling conversation, and a meal like no other, from the heart.

A late night led to a late morning, and a spectacular brunch which rekindles my hunger just recalling it; the leftover hasselbacks were revived by slicing them and frying in butter, The Foodie’s Wife baked a fabulous loaf of herbed buttermilk bread, piles of bacon and doodvreters, a local speciality of sliced brisket from Merino butchery in Graaff-Reinet, scrambled eggs, and tomatoes I was finally permitted to slice, the kitchen no longer being forbidden territory.

“I have decided you must come back,” announced The Foodie firmly. I’ll even be allowed to cook next time. TGIFood/DM