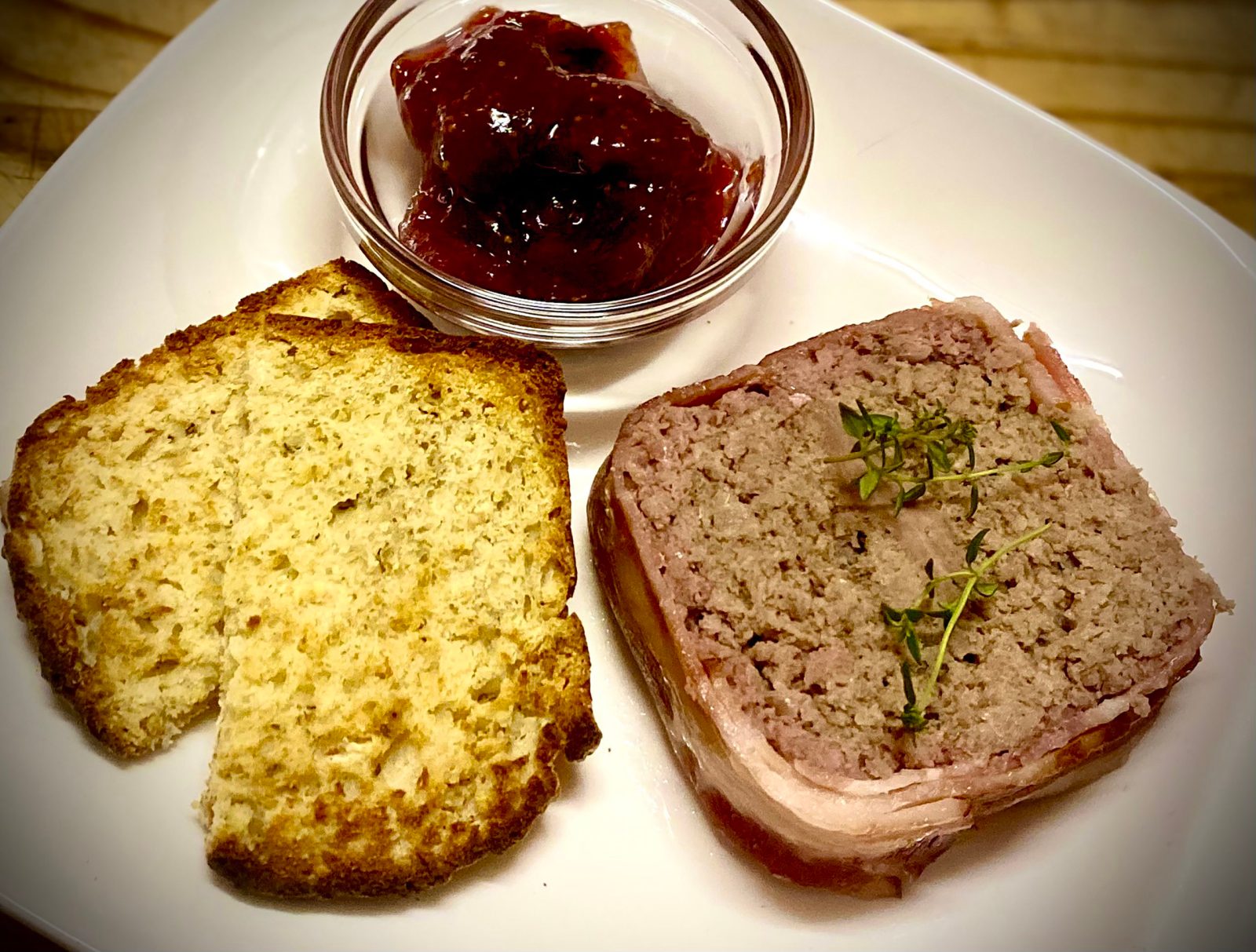 This is essentially a rabbit terrine, although I made it with a scrub hare shot for me by a farmer friend. It’s the perfect meat for an old-fashioned French-style terrine, Cognac and all.

1 hare or rabbit, skinned and cleaned

A similar quantity of pork and pork fat

¼ tsp ground allspice (not mixed spice, that’s not the same thing) (If you only have whole allspice, grind them in a coffee grinder.)

12 rashers of streaky bacon, or more if needed

1 terrine dish with a lid

Simmer the finely chopped onion in the butter until softened. Leave aside to cool to room temperature.

Debone the hare or rabbit. Just cut all meat parts away from the animal, keeping the bones to freeze for making a stock in the future.

Slice the meat as finely as you can, with a very sharp chef’s knife. Place in a bowl or suitable container for marination and refrigeration.

Cut up the pork meat and fat into similarly small pieces and add that.

Chop up the chicken livers and add them.

Add to the bowl the salt, pepper, thyme, allspice, Cognac and cooked onion. Stir to combine and refrigerate for 24 hours or thereabouts.

Remove from the fridge a few hours before you want to cook it. When it’s time to start cooking the terrine, pass all the meat through a mincer, twice, to make it super fine. Then beat two eggs and stir them in well using a wooden spoon.

Lay out the bacon, overlapping, from one side of the terrine to the other, all the way along its length, with the rest of the bacon rashers hanging over the sides. Then lay two or three rashers along each end.

Spoon in all of the minced meat.

Pull the overlapping bacon over the top, starting with the rashers at each end. Then fold the other rashers over on top, overlapping a little. If they’re too short to cover it to the centre, add a couple of bacon rashers on top to close the gap.

Cover with foil, then put the lid on top of that.

Place the terrine in an oven dish or similar (i.e. one longer than the length of your terrine) that you have filled one third with water. Cook for two hours in a preheated 180℃ oven, then turn off the oven, remove the terrine carefully to a work surface, and lift it out very carefully to set aside to cool. You could place a heavy weight of some kind on top (having removed the lid) to keep it solid while it cools.

Once it’s cooled to room temperature, turn it out carefully onto a board.

I served it with a small amount of this fig jam that I made the other day; otherwise, a good quince jelly or similar would suit it well. Bon appétit. DM/TGIFood