Politicians push for amendment of Constitution to allow for land expropriation without compensation – civil society, not so much 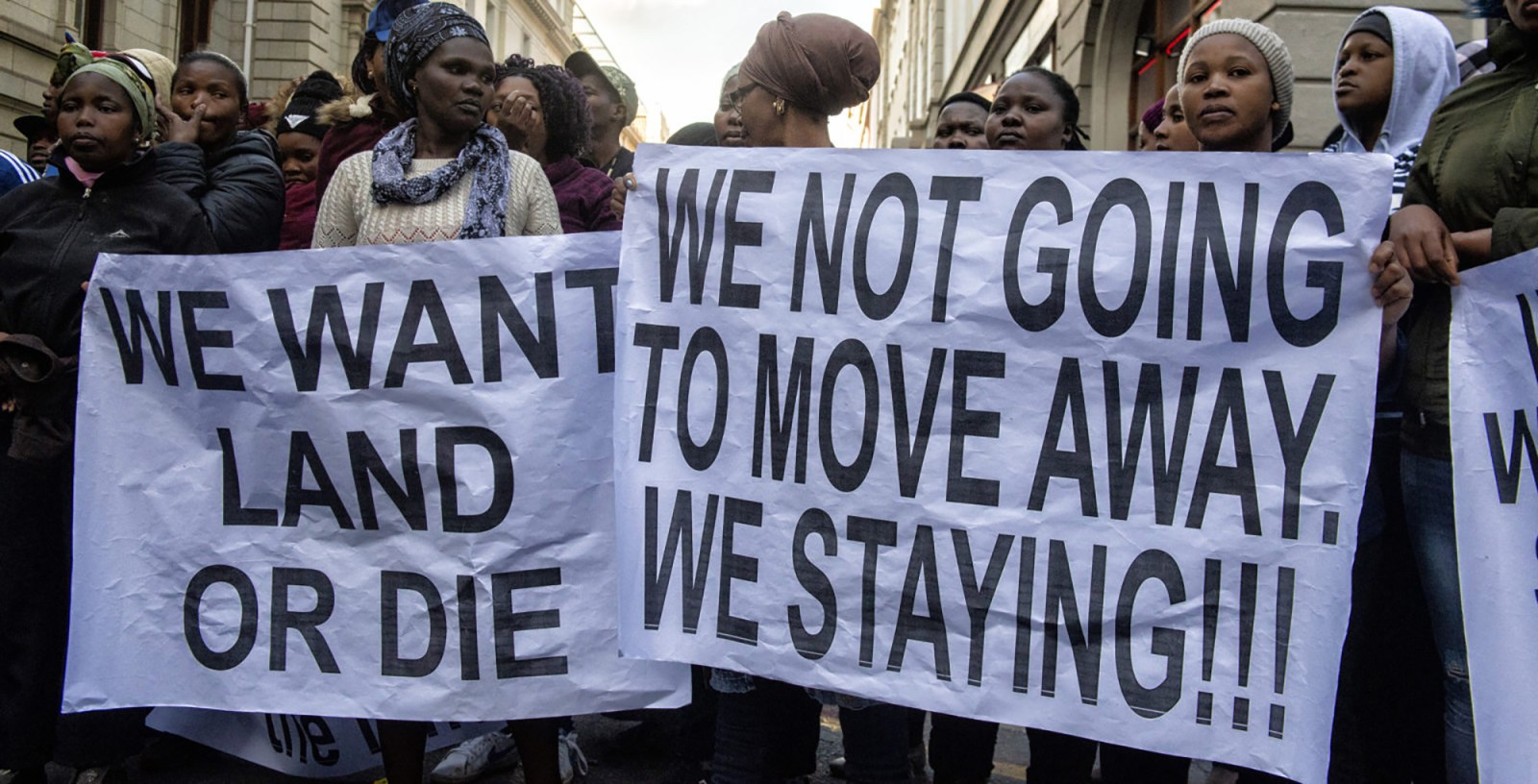 The need to amend section 25 of the Constitution, dubbed the property clause, seemed far from settled in Tuesday’s parliamentary public hearings. That’s even if ANC and EFF MPs appeared to move to a predetermined outcome, armed with some sharp political barbs.

“Do your members acknowledge [they] have been the beneficiaries of a crime against humanity?” was how EFF MP Mbuyiseni Ndlozi put it to AgriSA after a presentation that changing the Constitution would not redress land inequality and boost land reform.

It followed his previous comments that “colonialism, by definition, was a criminal confiscation”, and how the proposed constitutional amendment for compensation-less expropriation was “the outcome of a democratic process”.

AgriSA CEO Christo van der Rheede responded, “Farmers at this point in time are producing food, earn foreign exchange. We cannot deny what has happened in the past, but we need to have a very, very realistic approach to addressing the social justice.”

Money from the agricultural sector was available for the government to ramp up its land and agrarian reforms, Van der Rheede added – R500-million from the AgriSeta, or sector training and education authority, and another R500-million in statutory levies from the National Agricultural Marketing Council.

No amendment of the Constitution was needed, because section 25(8) already allowed legislative measures, like expropriation, “to redress the results of past racial discrimination” and “to achieve land, water and related reform”.

What was necessary, Van Dalsen argued, was to deal with the corruption, inefficiency and incapacity demonstrated by the government – as stated in the report by the High Level Panel chaired by former president Kgalema Motlanthe – the failure to amend the existing expropriation legislation, and the minimal financial provision, or o.35% of total government expenditure for land reform and agricultural support.

Also important were the criteria, including how beneficiaries would be chosen, what rights they would have, whether a properly staffed and funded land reform agency would manage this, and if there was the political will and sufficient certainty to avoid further shocks to business and investor confidence.

“If these questions are not addressed in an effective and convincing manner, land reform will not succeed. Focusing only on section 25 of the Constitution, on its own, offers no final solution,” said Van Dalsen.

Committee chairperson ANC MP Mathole Motshekga’s reply was that such questions could not be addressed by the Constitution, but were dealt with in the amendment of the 1975 Expropriation Act.

“So don’t worry about political will because those departments and the political leadership are hard at work to deal with those issues. You should not fear government is not doing the necessary.”

Motshekga’s comments come on the same day Business Day reported how black farmers had lodged R2-billion claims over unfair evictions – apparently by “rogue officials” – against the land reform and agriculture department during the 2019/20 financial year.

Such reports of black farmers being moved on have emerged countrywide since Land Reform, Rural Development and Agriculture Minister Thoko Didiza on 1 October 2020 announced that the government would redistribute 700,000 hectares of underutilised state-owned land, and sign 30-year leases with beneficiaries.

On Tuesday Cosatu came out clearly in support of the 18th constitutional amendment, that in the bill states:

“A court may, where land and any improvements thereon are expropriated for the purposes of land reform, determine that the amount of compensation is nil.”

The labour federation’s parliamentary liaison, Matthew Parks, told MPs the amendment was long overdue and crucial to changing South Africa’s status as the most unequal country in the world.

The constitutional amendment proposal provided “the correct balance” of interests, rights and redress.

“We just need to look next door to Zimbabwe to see what happens when we don’t deal with land reform. The alternative to not dealing with land reform is a ticking time bomb, which the country can’t afford.”

…the 2014 Restitution of Land Rights Amendment Act, which reopened the claims window that had closed on 31 December 1998, was set aside by the Constitutional Court in July 2016 precisely over rushed public consultations

But, Parks said, it wasn’t a blank cheque for the government, or a magic wand. The government had contributed to the current state of land reform by failing to implement laws when they were finally passed.

Cosatu’s presentation was welcomed by ANC and EFF MPs. When Freedom Front Plus Chief Whip Corné Mulder asked for examples of which countries Parks had meant when he argued zero-compensation expropriation was permitted, Motshekga said such questions were unfair, but allowed answers.

It was one of the rare moments when the opposition MPs spoke in the political faultlines. Most of the three hours belonged to the EFF and ANC MPs, sharply questioning why socioeconomic redress of “colonial confiscation” did not feature in any but Cosatu’s presentation and why legal minds say no constitutional amendment is needed because expropriation without compensation is implicit in section 25 of the Constitution.

Or as ANC MP Sibusiso Gumede put it: “We want to educate and make people aware the process can be done. We must go and make the necessary amendment.”

This was alongside Motshekga describing the amendment as “desired”, and Ndlozi saying, “The stage we are at, the change of the Constitution will happen.”

That’s the strongest signal yet that the Constitution 18th Amendment Bill is set to muster sufficient numbers to meet the two-thirds support on the back of the ANC and EFF when the matter comes to a vote in the House.

This would follow from the ANC decision to support the EFF motion on compensation-less expropriation in February 2018.

After the initial round of unprecedented nationwide public hearings in 2018, in mid-November 2018 the constitutional review committee recommended an amendment of section 25, which the National Assembly supported on 4 December 2018 in a vote of 209 for and 91 against, with no abstentions

Arising from this, the ad hoc committee on amending section 25 of the Constitution was established in February 2019. Over the past two years it needed three extensions and one reestablishment, but the committee must complete its work by the end of May.

It was a win for the opposition that it got to the two days of public hearings with 14 scheduled presenters, including AfriForum, the Banking Association of South Africa, Black First, Land First and the SA Catholic Bishops’ Conference.

DA MP Annelie Lotriet vocally opposed an ANC-EFF agreement against public hearings as “short-circuiting parliamentary processes” in late February 2021 when the ad hoc committee was pushing to meet its then end-of-March deadline.

Undoubtedly, legal advice to the committee would have emphasised how the lack of such public consultations has in the past meant laws were declared invalid. For example, the 2014 Restitution of Land Rights Amendment Act, which reopened the claims window that had closed on 31 December 1998, was set aside by the Constitutional Court in July 2016 precisely over rushed public consultations.

The public hearings on amending section 25 of the Constitution continue on Wednesday, the same day Parliament’s public works committee starts two days of public hearings on the required legislation of general application that in its current draft similarly allows “nil compensation” – the Expropriation Bill. DM