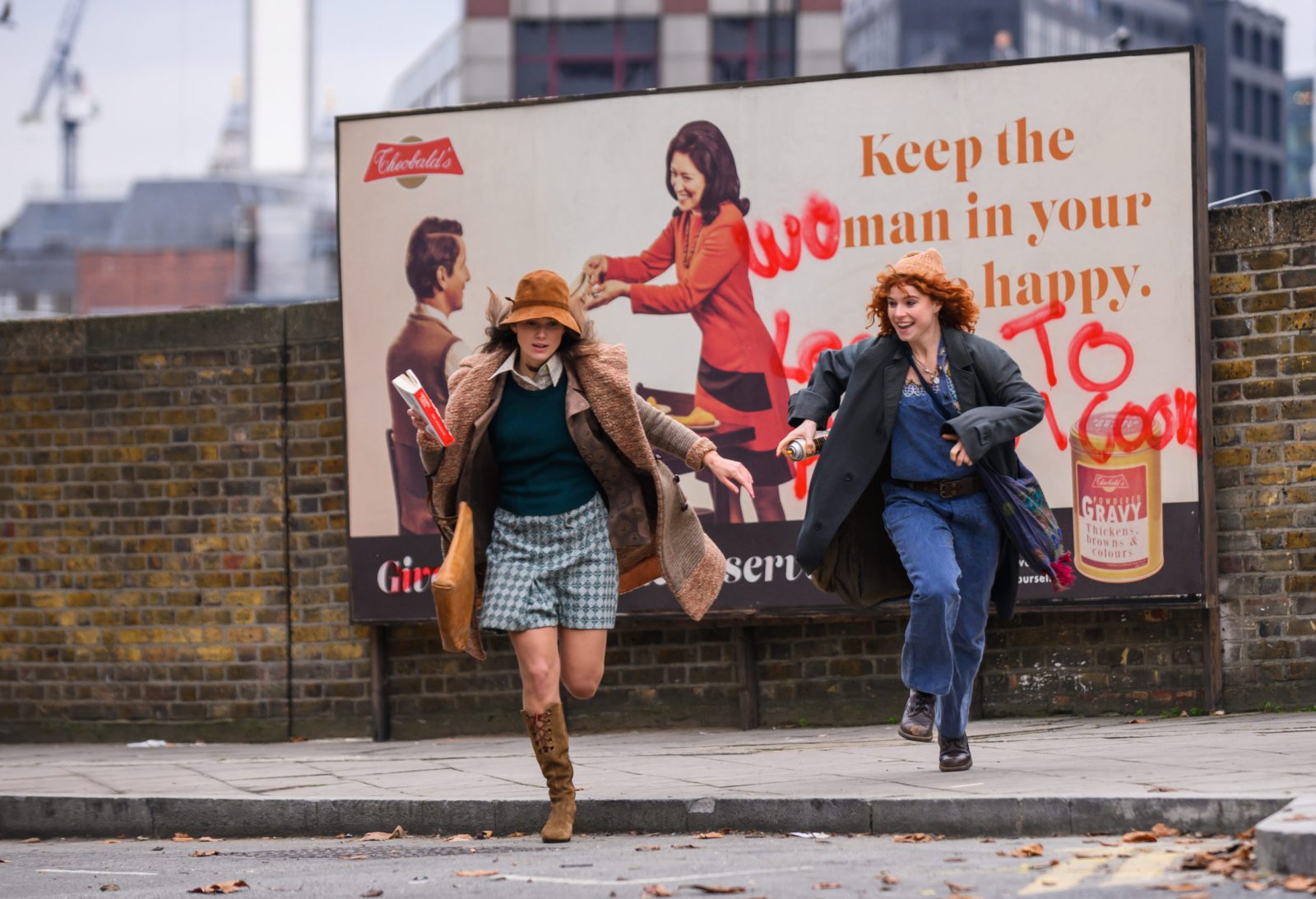 ‘Misbehaviour’ is an uplifting feminist period piece, starring Keira Knightley, about the disruption of the live broadcast of the 1970 Miss World pageant which lit the fire of the Women’s Liberation Movement, available on Showmax from March 18.

The live broadcast of the 1970 Miss World competition was viewed by over 100 million people worldwide – more than the World Cup or even the moon landing the year before. Misbehaviour is an uplifting film about the disruption of that broadcast by the newly formed Women’s’ Liberation Movement, which forced the world to question the sexist culture of pageants, shook the racial culture of the competition itself, and spurred massive growth of women’s movements globally.

The film is told from the perspective of the women of colour participating in the competition, hoping to make the most of their rare opportunity within a white patriarchal establishment; as well as the radical white women planning to subvert that establishment.

We open with a nervous Sally Alexander (played by consummate period piece actress Keira Knightley) being interviewed by an all-male panel in the history faculty of University College London. A divorced mother, she dances around their sexist presumptions and prejudices, trying to allay their hesitancy whilst avoiding threatening them with overt feminism. When asked about having left school at 15, she replies: “my school didn’t really foster academic ambition, it was more about preparing us for marriage.”

Sally is an intelligent feisty feminist who intends to work towards equality from within the male establishment, but even when she’s given a seat at the table, it’s a high chair. She is dismissed and drowned out by male classmates and academics, and when she proposes to write her dissertation on the labour movement from the perspective of women, she is urged to “steer clear of more minority interests.”

Frustrated by idleness and outright bigotry, Sally is drawn to a group of radical young feminist activists in the Women’s Liberation Movement who plan to disrupt the imminent Miss World Competition.

Cut to a gaggle of dolled-up gals in swimsuits doing little twirls so that a panel of male judges can inspect their behinds. A man holds forth, “lovely face obviously, good legs. No defects – knock-knees, wonky teeth … They also have to be unmarried, by which I also mean untouched, and if they’re not pretty much 36-24-36, it goes without saying, the curves won’t be in the right place.”

Meet Eric Morley, creator of Strictly Come Dancing and the Miss World Competition (not to be confused with the Miss Universe pageant, owned by the putrid Donald Trump between 1996 and 2015). Morley, played zealously by Rhys Ifans, is a sort of pervy Simon Cowell wheeler-dealer character.

In 1970, Morley was coming under fire for supporting the apartheid regime by choosing white South African contestants to participate in the competition each year, so in a spineless attempt to manage his PR and avoid political attention, he invited both a white woman and a black woman, who was deemed Miss Africa South so that a white woman could remain the official Miss South Africa.

Miss Africa South, AKA Pearl Jansen was an 18-year-old machinist in a shoe factory in Bonteheuwel when she was abruptly carted off to London. The South African authorities warned her that if she talked about home, she would not be allowed back, and when she did return from her triumphant adventure, things remained just as bad for her as they had been before.

Jansen says that the production of Misbehaviour has done more for her than her success in the contest itself. Hers is not the Cinderella story one would have hoped for, but definitely one of the most interesting of the lot.

Alas, she’s played by a British actress, Loreece Harrison, whose accent sounds closer to Maori with a lisp than anything South African, and whose performance is wholly underwhelming.

Misbehaviour boasts of its intersectional approach to feminism. It strives to show that there are two sides to every coin by shallowly exploring rival feminist perspectives. When Sally first meets the spunky hostile radical, Jo Buckley, Jo confronts her for trying to be part of the male establishment rather than topple it, to which Sally responds, “Well if I’m in it, it won’t be the male establishment anymore will it?”, illustrating two opposite strategies in pursuit of change.

The film exalts both Sally and Jo’s forms of activism, but also admits their flaws, showing how Sally’s academic ambitions are stifled, and how Jo’s militant anti-establishment tactics (involving vandalism and boycotting television and the media) are impractical and throw the baby out with the bathwater. Things really kick-off when the two start working together.

The film navigates a complex political space, condemning pageantry, while not demonising the contestants themselves, nor even the previous generations of women who chose not to fight the patriarchy. One of the stand-out scenes is a conversation between Sally and her antifeminist mother, who berates Sally for her “emasculating attitudes”, accusing her of selfishness, and speaks of the enormous pressures and expectations that prevented her from rebelling against her prescribed domestic world.

The women of Sally’s family represent the past, present and future of women’s rights. What sends prim and proper Sally over the edge, is witnessing the influence that the Miss World competition has on her daughter. Throughout the film we see Sally’s daughter mimicking gender roles in her play, pouting and twirling and putting on lipstick. It’s a forlorn omen of the patriarchal world that awaits her if things do not change. Yet in order to improve her daughter’s future, Sally must consider drastic action that could get her arrested and endanger her family in a different way.

The film’s approach to Sally’s home-life says something about where it assigns value to her story, putting little focus on the romantic side of her personal life; a decision which is indicative of Philippa Lowthorpe’s feminist directing.

The intersectionality of Misbehaviour is what makes the film interesting but it’s also what makes it messy and incohesive – one is left unsure about what to take away. Should we be inspired by the women of colour who managed to succeed within a sexist establishment by submitting to objectification, or the privileged white women who fought to tear it down at risk to themselves?

As tension is building towards a chaotic climax, we witness the ultimate degrading moment: the pageant contestants are made to turn so that the audience can assess and ogle at their derrieres. One cannot deny the blatant misogyny that underpins the competition. “The only other forum in which participants are weighed, measured, and publically examined, before being assigned their value, is a cattle market.” Yet when a woman of colour is celebrated by the very same sexist competition, a twee piano riff reminds us to feel moved and inspired.

Misbehaviour missed a lot of opportunities. The opportunity to deal with the sexual abuses that go hand in hand with pageants, to investigate Pearl Jansen’s story with depth, to explore the intersectionality of liberation movements in a more meaningful way, and the opportunity to have a little more fun with the protest – it is called Misbehaviour after all. But it still delivers on the promises it makes – it’s an uplifting feminist film with a strong cast about a fascinating and exciting story worth remembering. DM/ ML

Misbehaviour is available in South Africa on Showmax from March 18.
You can contact This Weekend We’re Watching via [email protected]