Mthokozisi Ntumba’s death: When ministerial words are as lethal as police bullets 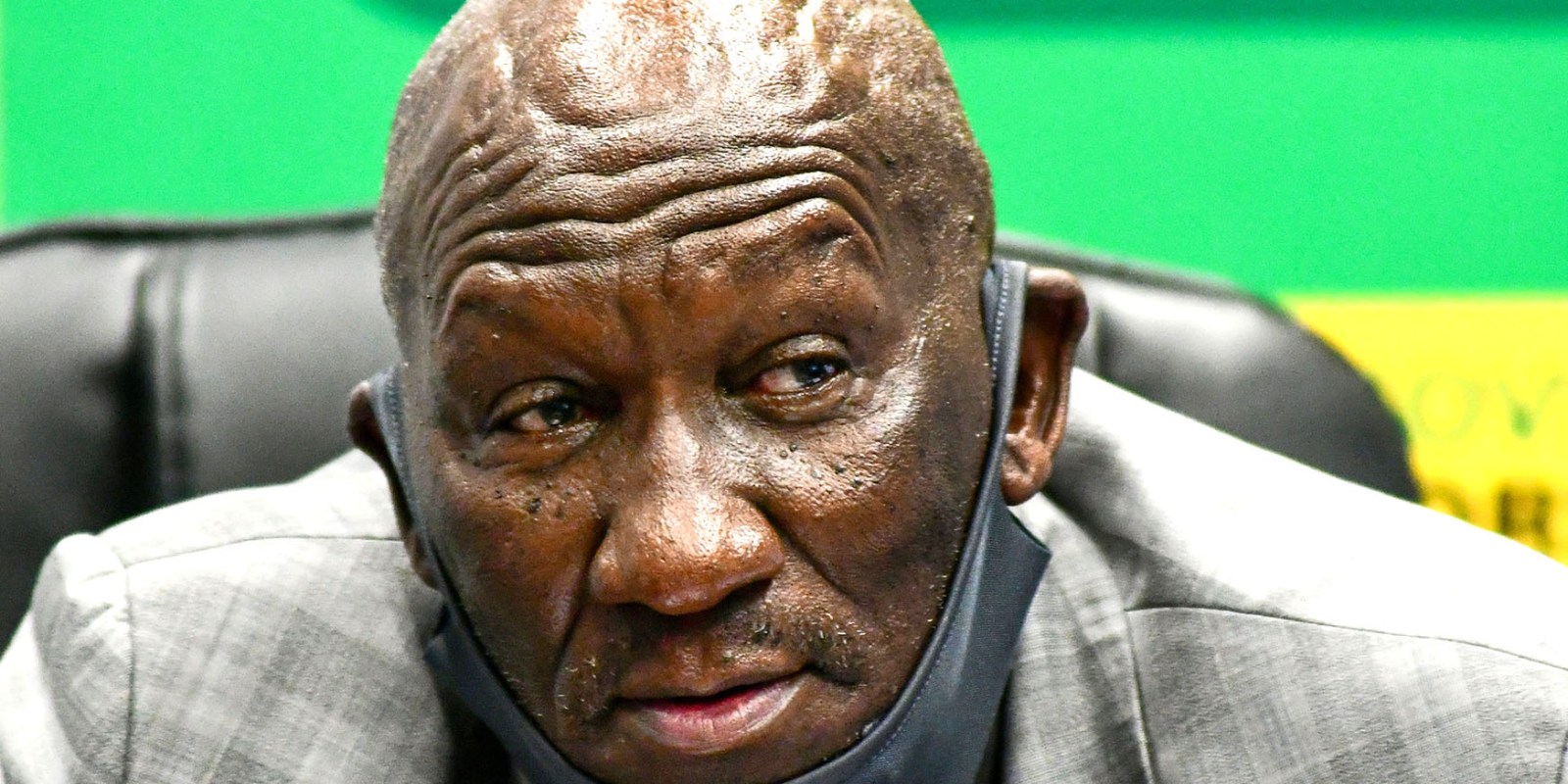 When Police Minister Bheki Cele said ‘someone just… went crazy’ to describe Mthokozisi Ntumba’s death at police hands, he deflected responsibility. For months Cele had urged the police to defend themselves, with deadly force if necessary. Words matter.

On the morning of the Marikana massacre on 16 August 2012, the then North West police commissioner Lieutenant-General Zukiswa Mbombo did not mince her words.

Later that Thursday, 34 striking Lonmin mineworkers were dead and 78 miners were wounded, as emerged at the Marikana Commission of Inquiry, and also in accounts like Greg Marinovich’s Murder at Small Koppie: The Real Story of the Marikana Massacre.

Around that time, in an important signifier of shifting official attitudes, the government’s language increasingly turned to “law and order” and respecting “the authority of the state”, rather than providing safety and security to people and communities.

Roll forward to December 2020 as Police Minister Bheki Cele travelled across South Africa on a so-called inspection tour for the police’s festive season campaign, #OperationTightControl. The ministerial message at various SAPS parades was — to summarise — “defend yourself, and remember the law allows police in danger to use deadly force”.

If it is to be, a choice can be made to continue with kragdadigheid, with a focus on enforcing the law, respect for the authority of the state and continued militarisation of the SAPS. But then there’s no room for crocodile tears in the wake of public outcry over police brutality.

That remark came after Cele set out that after police and criminals go toe to toe, and then disengage, it can’t be the police lying there, “it must be someone else”, according to this eNCA video clip.

“If your own life is under danger, you have a right to use deadly force. That’s the word written in the law. The word is ‘deadly’.”

At the Gauteng stop on 18 December 2020, Cele, in a broadcast media interaction, was asked about the use of rubber bullets at three shebeens in the Eastern Cape — and whether that wasn’t tantamount to police brutality.

“Rubber bullets is part of moving a person that doesn’t want to be moved. If they don’t respect, we use all methodology to make sure they respect the law.”

At the 30 December 2020 Durban stop of the inspection tour, Cele said: “Those that are causing trouble must get trouble.”

Citing section 205(3) of the Constitution, which deals with policing, Cele reiterated the part about “enforce the law”, rather than any other aspect, including preventing and investigating crime and protecting and securing South Africa’s inhabitants, according to this eNCA video clip.

It’s ministerial statements like these that set the foundation for the sense of impunity prevalent in the SAPS.

Unlike former deputy police minister Susan Shabangu who in April 2008 told the SAPS, “Shoot to kill”, Cele is too politically astute and sophisticated to make such blunt statements. After all, he’s survived the Byzantine, and often lethal, politics of KwaZulu-Natal.

Cele steers a careful path, invoking section 205(3) of the Constitution, human rights and what on the surface seems to hit all the right notes.

Claiming that section 49 of the Criminal Procedure Act allows the use of lethal force in self-defence by the police doesn’t fully reflect that section of the law. It deals with police powers of arrest — and the use of proportional force that allows shooting only as a last resort, or in self defence if a suspect is a threat of violence and serious bodily harm. And only then.

Meanwhile, SAPS Standing Order 262 clearly emphasises the use of least force, and only after efforts at de-escalation do not bear fruit. It must also be highlighted that South Africa has signed international treaties against torture and brutality.

Emphasising the constitutional provision of enforcing the law in section 205(3) plays into police kragdadigheid when the Constitution cannot be read in isolation. The Bill of Rights guarantees that the right to life and to dignity also play central roles in policing.

In fact, the drafters of the Constitution held the right to life and the right to dignity as so important that these rights may not be limited in any way — not even in a State of Emergency or a State of Disaster.

But the ministerial messaging further pushes the shift from a constitutional focus on people’s safety and security towards the language of law and order and authority of the state. Directly talking to this shift is the Cabinet’s recent framing of “continued attacks and killings of police officers as not only barbaric, but also a threat to national security”, according to the official statement of its meeting of 10 March.

The rise of the securocrats in the State of Disaster Covid-19 lockdown plays into this. NatJoints (National Joint Operational and Intelligence Structure), a structure of police, soldiers and spooks that is not established in law or regulation and does not account publicly, now monitors, recommends and operationalises the Covid-19 lockdown regulations, as the SAPS told MPs more than once in 2020.

It is hypocritical at worst, and fudgy at best, for Cele to say after paying respects to Ntumba’s family that he had no explanation for the death of the 35-year-old father, husband and recent MA graduate.

“I can’t explain it. It’s something, it has no inch, it has no grain of explanation and defence on it. Somebody just, for me, just went crazy,” was how Cele put it in a broadcast eNCA interview on 11 March.

On Tuesday the police watchdog, the Independent Police Investigative Directorate (IPID), said four Public Order Police officials had been arrested in connection with Ntumba’s killing and would on Wednesday appear in court on charges of murder, attempted murder and defeating the ends of justice.

Approached for comment, the police ministry on Tuesday pointed out that in the past three weeks 10 officers had been killed, with many “gunned down by criminals and their state-issued firearms stolen”.

“Within that context, Minister Cele makes the point that officers should not die with guns in their hands. When they are confronted by violent criminals and their lives and the lives of citizens are in danger, they should and must use lethal force. The minister urges police to defend themselves,” said police ministerial spokesperson Lirandzu Themba in a text message.

Yet the 2012 National Development Plan talks of a professional, service-orientated police service.

And then there is the July 2018 report of the panel of domestic and international policing experts that arose from the Marikana Commission of Inquiry, which has been on Cele’s desk since. It will be made public at the end of March, the ministry confirmed.

How that unfolds will be crucial. Daily Maverick has been reliably informed that the value of this report is not just in its substance and recommendations, but crucially in its supporting documents. These should be released into, for example, an online archive, as part of transparency and public accountability.

It is understood the report recommends policing according to job function, not form or blunt rank hierarchy, in a fit-for-purpose police service that links competency and qualification to performance. Professionalisation, demilitarisation and respect for law, ethics and public scrutiny are other recommendations.

The reports will be a key marker in the future path of the SAPS. If its release is going to be a pro forma exercise, then this follows on from the SAPS Amendment Bill — the first wholesale review of policing since the 1994 democratic transition — largely failing on the transformation front. That draft legislation deals more with bringing community policing forums into the SAPS fold by offering office space, transport and financial support, and extending ministerial powers. The bill is expected in Parliament at the end of August.

If it is to be, a choice can be made to continue with kragdadigheid, with a focus on enforcing the law, respect for the authority of the state and continued militarisation of the SAPS. But then there’s no room for crocodile tears in the wake of public outcry over police brutality.

Other options exist, but they must be clearly articulated — if the strategic and political decision is to stop the SAPS’s slide back into a force and to turn it into a professional service.