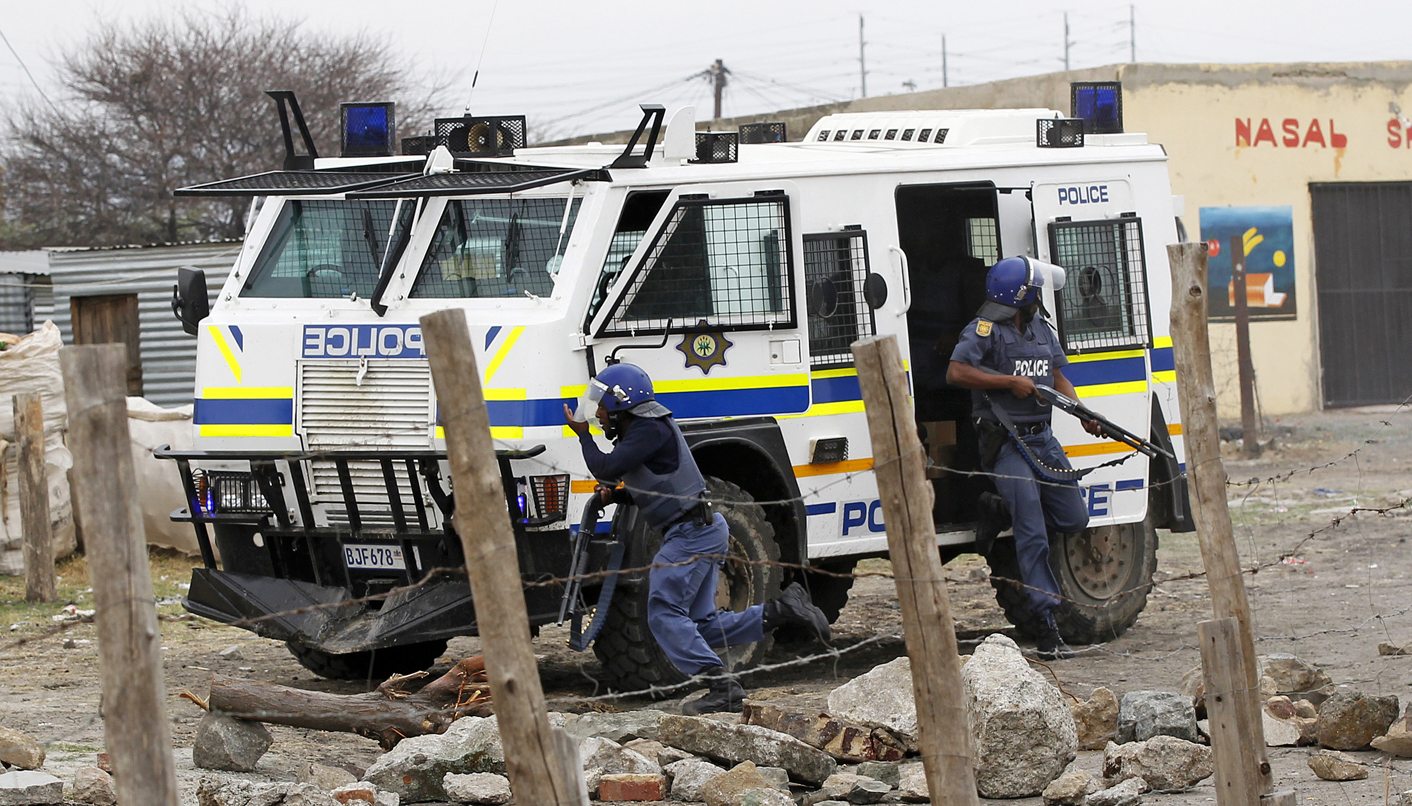 More than two-and-a-half years after a panel of independent experts charted a path for SAPS transformation, that report has yet to see the light of day. Instead, the securocrats’ law and order ‘kragdadigheid’ rhetoric — the Constitution talks of people’s safety, security and protection — is ratcheted up.

Police Minister Bheki Cele has had the report on police transformation — ethos and strategy, not numbers — by the independent panel of experts since 25 July 2018. It remains unclear what has happened to the report and recommendations that directly arise from the Marikana Commission, established after police killed 34 striking Lonmin miners on 16 August 2012.

Daily Maverick understands the report takes a holistic approach to transformation — emphasising professionalisation and demilitarisation, but also a fit-for-purpose police corps that respects the law, its code of ethics and public scrutiny. It’s about protecting and securing people in South Africa as the Constitution stipulates in Section 205, not about kragdadige law and order crackdowns catering best for those who wear uniforms.

Crucially for transformation, the independent expert panel report is understood to link competencies and qualifications to performance and the role of the post, rather than a blunt rank pecking order.

In line with the 2012 National Development Plan (NDP), South Africa’s national blueprint, the panel’s report emphasises professionalisation and demilitarisation — and recommends a national police board.

Such a board would be responsible for recruitment to enlist top-notch talent, appointment and promotion. It would also set and assess professional standards. A national policing board would remove potential political manipulation and nepotism that in the past has bedevilled many senior appointments.

On professionalisation, it’s understood the independent expert panel report talks of a fit-for-purpose SAPS as a competent police corps with a command structure based on role, linked with the necessary decision-making authority, rather than rank.

On demilitarisation, the report emphasises accountability and public civilian oversight, while at an operational level it recommends what is described as negotiated crowd management, including de-escalating of tensions.

For example, a police forensic laboratory official could well be a colonel, or brigadier even, because of a biology, chemistry or forensics degree and/or experience. That mix of competencies and rank could assist performance; incumbents are appropriately remunerated and rewarded.

A focus on role, for example, also would allow a public order colonel in charge of a protest to remain in charge even if a general shows up.

As a policing transformational strategy, recommendations do consider appropriate resourcing from gear and weapons to vehicles, but that’s just the beginning. It tracks policing transformation from preparation (for example, equipment) to organisation that would include, for example, appropriate intelligence, where consequence management and accountability are central.

But all this might yet be a step too far for the SAPS and its political leadership.

In August 2020, the now ex-panel of independent experts — they were drafted from South Africa, Russia, Brazil, Zimbabwe and Holland — wrote to the police minister to call for the public release of the report.

“We as former panellists, as fellow South Africans and colleagues in international solidarity, look to you to lead on us fulfilling our collective duty to ensure that nothing like Marikana ever happens again, to repair the damage caused, and to professionalise the South African Police Service,” said the letter dated 3 August 2020, seen by Daily Maverick.

Although a discussion of the police transformation report had been scheduled in late November 2020 by Parliament’s police committee, it was cancelled due to the pressure and priority of passing the Medium-Term Budget Policy Statement (MTBPS).

It is understood parliamentary discussions would be rescheduled, but that has not happened. A meaningful engagement also would require Cele publicly releasing the report.

In mid-December 2020, Cele’s spokesperson Lirandzu Themba confirmed that releasing the panel’s report had been considered. “It’s in progress and should be released in due course”, she said in a text message, adding the minister would make the announcement.

This has not happened yet.

Cele is the third police minister since 2015 to have dealt with the recommendations of the Marikana Commission report.

His predecessor Nkosinathi Nhleko in January 2016 established the independent panel of experts and the terms of references that allowed the panel to go beyond public order policing into the need for SAPS demilitarisation and professionalisation.

Next, Fikile Mbalula drove the process through countrywide consultations, ensuring more stringent conditions of employment regulations and the exit of three senior enablers of political pliancy and malfeasance.

Since 27 October 2017, these regulations require police not only “to serve the public in an unbiased and impartial manner… be polite, helpful and reasonably accessible…”, but also “not receive, solicit or accept any gratification…” Regular financial disclosures by senior offices have been mandatory since.

It was Mbalula who agreed the independent expert panel would have its report and recommendations peer-reviewed and discussed at various sessions with police leadership and the parliamentary police committee, but also with civil society.

Cele has done none of that.

The pressure to publicise the independent experts panel transformation report comes at a crucial time — amid restructuring and initial steps towards amending the SAPS Act, the first major legislative review since 1995.

That the police service is restructuring emerged in its statement on 6 December 2020. At national level, the number of deputy national commissioners is reduced from four to three — one such post was vacated when Lieutenant-General Bonang Mgwenya was dismissed summarily on 12 November 2020 after appearing in court on fraud and corruption charges, one of several top cops charged in recent months — and the 13 divisions are reduced to 10.

The SAPS has since been shy to provide further details, despite inquiries in mid-December 2020 and again in January 2021. Regardless, the information must be part of the SAPS annual report which must be tabled in Parliament by the end of September 2021.

Regarding the draft SAPS Amendment Bill, after years of talk of police professionalisation and demilitarisation, the draft bill falls short.

Demilitarisation is not mentioned, nor is transformation.

Crucially, the draft bill is silent on the national police board recommended by the independent expert panel report. That recommendation was in line with the 2012 NDP proposal for a national policing board.

“A national police board should be established with multisectoral and multidisciplinary expertise. It will set standards for recruiting, selecting, appointing and promoting police officials and police officers…”

Yet the draft bill’s memorandum refers to the independent expert panel report, saying “the relevant recommendations made by the panel have been included”, as it was in a working paper sent for comment to, among others, the SAPS, police watchdog the Independent Police Investigative Directorate (Ipid) and police unions.

Without the independent panel report being publicly available, the police transformation picture remains incomplete. It’s simply not possible to determine if any recommendations were indeed included in the draft bill — and if so, specifically which ones, and crucially, which recommendations were eschewed.

Until that happens, the skop, skiet and donner brigade can continue to hide behind merely ticking the boxes — and the fundamental police transformation required in honour of the Marikana dead and survivors, remains elusive. DM