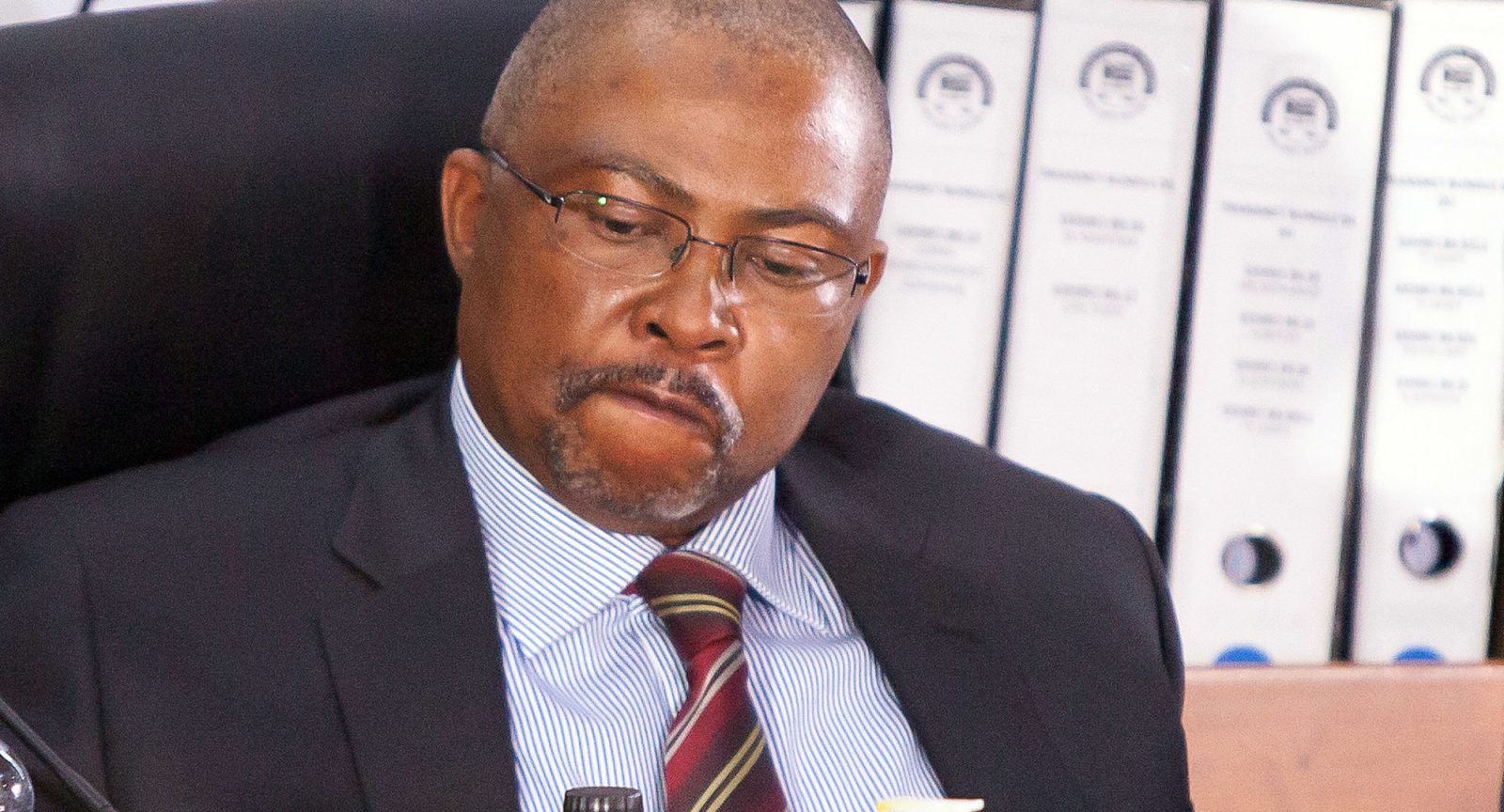 Transnet’s comeback kid, former group chief executive Siyabonga Gama, claims he is ignorant of any hidden agenda related to his shock reinstatement at the parastatal after his dismissal in 2010 over misconduct connected to two major contracts.

Appearing before the Commission of Inquiry into State Capture on Thursday, it was hoped former group chief executive Siyabonga Gama might provide clarity on what was behind the inexplicable decision to reinstate him as divisional chief executive of Transnet Freight Rail in 2011. But the man who went on to become Transnet group chief executive in 2016 after a disciplinary committee found him guilty on three charges of misconduct in 2009, remained a closed book.

This was despite repeated assurances by evidence leader Anton Myburgh SC that he was not being accused of any wrongdoing in this matter as he was not responsible for his reinstatement or later promotion.

Abandoning a “promising career in banking”, Gama said he joined Transnet in 1994 “to contribute my business skills to the growth and development of our country”. He had risen to the position of chief executive of the freight rail division when he was suspended in 2009 on charges of concluding an R800-million locomotive refurbishment contract in a manner counter to the board’s stipulations; irregularities in a R95-million security contract; and attacking colleagues who had raised the issue of misconduct.

Transnet’s internal processes found him guilty of all three charges and he was fired in 2010.

Testifying before Justice Zondo in October 2020, labour law expert Christopher Todd, who is a partner at Bowman’s law firm and worked with Transnet on Gama’s disciplinary inquiry, provided fascinating insight into Transnet’s pretzel logic when it came to reinstating Gama.

Not only was Gama parachuted back to his position despite the disciplinary findings against him, the board, chaired by Mafika Mkwanazi at the time, agreed to forking out R10-million in back pay and benefits, as well as paying 75% of the taxable portion of his legal costs related to his disciplinary hearing. This included the costs for his failed high court litigation against individual board members in which Judge Brian Spilg dismissed his application with costs, including the cost of counsel for 11 of 13 of respondents.

Mkwanazi failed to satisfactorily explain the board’s decision when he appeared before Justice Zondo on 19 October, but former Public Enterprises minister Barbara Hogan told the State Capture commission that former president Jacob Zuma was dead set on making sure Gama got the top job at Transnet.

Myburgh led that when Hogan failed to acquiesce to Zuma’s wishes, allowed the disciplinary process against Gama to conclude and oversaw his dismissal in June 2010, she was subsequently fired by the former president just three months later, with Malusi Gigaba appointed as the new Public Enterprises minister.

“I knew nothing about this,” claimed Gama. “I did not know I had the support of Zuma to be appointed as new chief executive of Transnet or that Hogan fell out of favour in relation… I don’t know if it had anything to do with me.”

Myburgh pointed out it was Gigaba who appointed a new board chaired by Mkwanazi which then bent over backwards and made the “indefensible” decision to reinstate Gama after Gigaba suggested the board review Gama’s dismissal.

Put to him that Gigaba as the new minister, acting on Zuma’s instructions, ensured he was reinstated in 2011, Gama said: “I emphatically deny any knowledge of such attempts”.

Instead, Gama credited his resurrection to his “negotiating skills”.

He said he referred his dismissal to the bargaining council, seeking to have it declared unfair. After he presented his arguments, Transnet asked that the matter be adjourned for the opportunity to negotiate a settlement, a process which fell to Mkwanazi.

“I did not want to go back to Transnet, I just wanted to see how much money they would give me to go away,” said Gama, straight-faced.

But, he said Mkwanazi wanted him to come back and turn around the rail freight division which was in financial difficulty. It was his negotiating skills in this arena, he claimed, which resulted in Transnet essentially paying him to return to his job despite the disciplinary findings against him.

Gama said part of his argument was that during the disciplinary proceedings against him, which he compared to a “Nuremberg trial” — which Justice Zondo ordered him to retract — he was not provided with the allegations against himself, and the loophole was that he theoretically could have sought a condonation for the irregular contracts he had signed off.

Asked whether he had not lobbied support from bodies such as the ANC Youth League and unions during his suspension, Gama said no, he went home and stayed with his father and planted tomatoes.

On the extremely favourable terms of the agreement allowing Gama to be reinstated, Justice Zondo, who has extensive labour law experience, said he was “shocked” when he saw it.

“I couldn’t understand how any employer went as far as they went,” said Justice Zondo. This was in light of the fact Gama had admitted guilt on all three charges and according to Todd, the charge of attacking colleagues was one requiring dismissal as it constituted a breach of trust with the employer.

Myburgh noted Mkwanazi, when questioned by the commission, admitted that if he had remembered Gama’s admission of guilt on this charge, he would not have argued for his reinstatement. Gama said he supposed he “was lucky” that it had been forgotten.

Myburgh pressed on with the fact that according to Mkwanazi, Gigaba, stepping into his new ministerial post, appeared to be fully briefed on the details of his disciplinary process and dismissal, but Gama denied meeting Gigaba or having engaged in correspondence on the matter.

Asked whether he had not lobbied support from bodies such as the ANC Youth League and unions during his suspension, Gama said no, he went home and stayed with his father and planted tomatoes.

Earlier in the day, Myburgh had raised the matter of Gama receiving assistance for his MBA from Vikas Sagar, the McKinsey SA linchpin in Gupta deals at Transnet, Eskom, and SAA.

Myburgh said information from McKinsey after their investigation into Sagar, found that Sagar coordinated research support for Gama’s MBA when he was enrolled in the Trium Global Executive MBA programme in 2016, as well as creating coursework material for Gama and his fellow student team members. This came at a cost to McKinsey of R100,000.

Gama said the project involved last-mile logistics and focused on a scenario on Calcutta, India, which Sagar, as an Indian national, took an interest in. He knew Sagar as McKinsey had been doing consulting work for Transnet since “at least” 2005.

Gama said the team of five or six students all had to submit reports and his job was to coordinate the final report. Sagar, he said, organised an experienced editor who was able to format the writing styles of the students from disparate countries. He said he did not know if McKinsey resources were used.

Asked whether he paid the editor, he said she never sent an invoice.

This was despite her having distilled the work for “three to four days” during the end of the holiday season, from 4 to 8 January.

“I did try send her an email later asking why she didn’t send an invoice but I never got an answer.”

Gama said he denied the “speculation” that McKinsey contributed to his coursework, and “couldn’t comment” on the assertion that it cost McKinsey R100,000.

He said the revelations were investigated by the MBA programme and he was cleared of any wrongdoing.