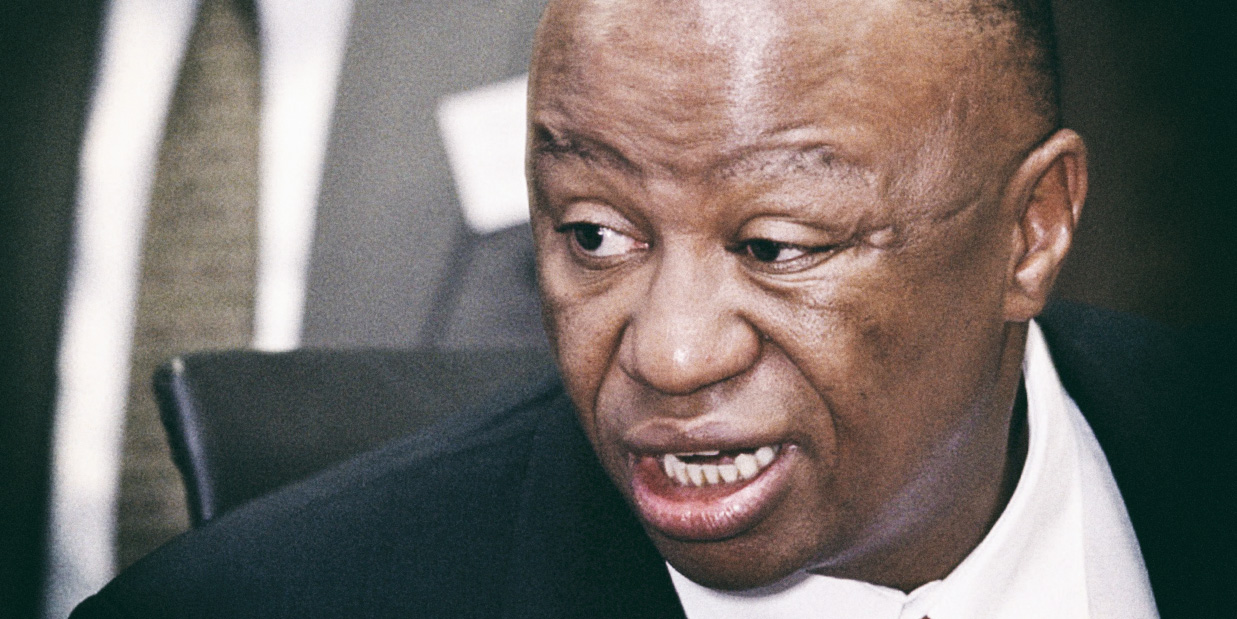 Mafika Mkwanazi faced repeated interrogation about the Transnet board’s irrational decision to reinstate Siyabonga Gama – and to pay his legal fees in a court case against the SOE, which he lost.

For him, it was simply too much that Transnet had paid the legal fees connected to disgraced executive Siyabonga Gama’s attack on the rail, port and pipeline company in the high court in 2009.

In paying more than R1-million to Gama’s legal representatives, Transnet scored an effective own goal – and at a premium.

Additionally, Transnet paid the legal fees Gama accrued during an internal disciplinary process at the company in which he pleaded guilty to three main charges.

According to the Constitutional Court website, Zondo worked in the labour court from 1997. He served as judge president of the Labour Appeal Court and the labour court “for a term of office of 10 years”.

The high court ruled against Gama in early October 2009. The decision was in the favour of Transnet and its representatives in a labour dispute Gama initiated over his suspension.

Despite Gama’s defeat in the court, the then CFO, Anoj Singh, approved Transnet forking out more than R1-million in legal fees for which Gama was, per a court order, liable.

To make matters worse, Transnet undertook to pay to Gama the bulk of the legal fees of Transnet and its representatives, for which he was liable, rather than his own legal fees.

The pricey decision defied logic, and Transnet’s board chair, who sent the settlement agreement to Singh, failed to provide illuminating answers on Monday.

Presented with the final deposits to Gama’s attorneys, former board chairperson Mafika Mkwanazi said they puzzled him.

Transnet bent over backwards for Gama, and the question Mkwanazi failed to clearly answer is, “Why?”

Zondo referred Mkwanazi to the taxed cost on Transnet’s legal bill in the high court litigation, as calculated by Bowman Gilfillan attorneys for Transnet.

“R426,000 that Mr Gama owed Transnet: you said they must stop trying to recover that. Why did you do that?” asked Zondo.

Mkwanazi stammered through his reply: “At the time, the view was even that cost needed to be part of that settlement discussion.”

Zondo grew irate: “Why? Why? Because that’s a question you would have asked anybody who told you that. You would have said, ‘Why?’”

“Chairman, I did not necessarily ask the question why,” Mkwanazi replied meekly.

“But that is the obvious question that the director of a company should ask in such a situation,” said an irate Zondo.

Mkwanazi maintained that he recommended Transnet cover Gama’s legal fees, and not those of Transnet and its representatives.

Singh and Mapoma, he claimed, misunderstood the settlement: “This is strange because even Mr Mapoma and Mr Singh should have gone back to that settlement agreement and interpret[ed] it properly.”

Zondo insisted that Mkwanazi account for his conduct as chair of Transnet’s board when it more than capitulated to Gama’s demands.

“You’ll have to, really, explain to me and the public properly what your decision was, really, here,” Zondo said.

Mkwanazi scrambled for an explanation. He alluded to documents which purportedly informed his decision to recommend Transnet pay Gama’s legal fees in the high court matter.

“No, but Mr Mkwanazi that is not going to be good enough,” interrupted Zondo.

Towards the end of Monday’s hearing, Zondo said, “A lot of taxpayers’ money went to Mr Gama and his attorneys. Firstly, in terms of the back pay for nine months, secondly, in terms of the legal costs for the high court and for the unfair dismissal matter.”

Claims of a cabal

After Transnet suspended Gama in 2009 pending a disciplinary inquiry over claims of misconduct, he took the matter to court.

Gama argued there was a conspiracy among Transnet seniors, who were members of a “cabal” intent on thwarting his ambitions of rising to group CEO.

On Wednesday 7 October 2009 in the South Gauteng High Court, Judge Brian Spilg dismissed Gama’s application with costs, including the cost of counsel for the majority of respondents (11 out of 13).

“In my view, reasonable and probable grounds exist for supporting the decision to institute disciplinary proceedings and to suspend Mr Gama,” wrote Spilg in his judgment.

“There is also no case made out of perceived bias that can affect the legality of the process. Much less that of institutional bias,” continued Spilg.

Gama lost in the high court, yet Transnet’s board went to extraordinary lengths to satisfy his demands and reinstate him.

Over two days of testimony, Mkwanazi faced repeated interrogation about the board’s irrational decision to reinstate Gama in 2011.

Gama was slapped with a final written warning lasting six months, which had lapsed by the time he returned to Transnet.

Despite the adverse findings against Gama, which included an attack on colleagues who held him to account, he received more than R10-million in back pay, bonuses and legal fees, after his high court attack on Transnet’s suspension failed.

Last week Zondo said Mkwanazi’s board had more than capitulated to Gama’s demands.

“They paid his contribution of 75% on his legal costs and all of that. So, it seems to me that it is something much more than capitulation,” he said.

Mkwanazi was a key cog in the machine that facilitated Gama’s return, and it ran on political fuel. Faced with the consequences of his position, he expressed confusion.

On Friday 16 October, Mkwanazi testified that the then minister of public enterprises, Malusi Gigaba, had encouraged him to review Gama’s dismissal.

According to Mkwanazi, Gigaba noted that white executives faced lighter sanctions for the same acts. The minister’s input went no further than advice to reconsider the matter, he said.

In a written reply to the State Capture Inquiry, Gigaba recorded that he played no role in Gama’s settlement and return to Transnet.

Mapoma claimed Mkwanazi told him the charge to ensure Gama returned to the parastatal came from “higher up” than Gigaba’s ministry. He assumed that by “higher up” Mkwanazi meant the then president, Jacob Zuma.

Gigaba’s predecessor, Barbara Hogan, has previously testified that Zuma favoured Gama and was determined for him to ascend to group CEO, while being well aware that Gama was under a dark cloud. Zuma has denied the claim.

On Friday 16 October, Mkwanazi rubbished Mapoma’s evidence crediting him with alluding to the then president.

Last week labour law expert and partner at Bowmans attorneys, Christopher Todd, testified on the damage caused by Gama’s return to the parastatal.

Gama was summarily dismissed in 2010, following the disciplinary inquiry into his misconduct.

The following year, he was reinstated, despite adverse findings against him and a lost high court case.

During the disciplinary inquiry, Gama faced three main charges, one of which related to a security services contract Transnet irregularly awarded to a politically connected company.

The appointment followed the SOE inexplicably scrapping an open tender process, which was under way.

Gama, as the then chief executive of Transnet Freight Rail (TFR), signed off the security contract of R19-million a year – while he was only authorised to sign contracts up to R10-million.

After Gama returned to Transnet in 2011, the SOE lost any appetite to recover about R95-million from GNS, after various amendments to the security contract.

When interrogated about the contract during an internal disciplinary inquiry, Gama initially concealed his relationship with the then minister of communications, Siphiwe Nyanda, who owned 50% of GNS.

After he was cornered with phone records, Gama conceded he and Nyanda were “golf buddies”, and said he did not want too much to be made of the link.

“It has far-reaching consequences for the whole business,” Todd said of Gama’s reinstatement.

Todd gave Transnet legal advice on the Gama matter. He testified at the inquiry on Thursday 15 October.

Gama conceded the GNS contract was “fishy and a scam”, yet on his return to the SOE, as “a consequence or a coincidence” said Todd, the will to recover parastatal monies evaporated.

“For me, I don’t accept it was coincidentally,” said Todd.

He testified that Gama’s return flew in the face of good governance at Transnet and, in his view, reinstating Gama demonstrated that good governance was not the board’s priority.

Mkwanazi concluded his evidence on Monday, having proffered more questions than answers as to his own conduct and that of Transnet’s board.

Evidence on Transnet will continue on Tuesday 20 October. Proceedings are due to start at 10am. DM