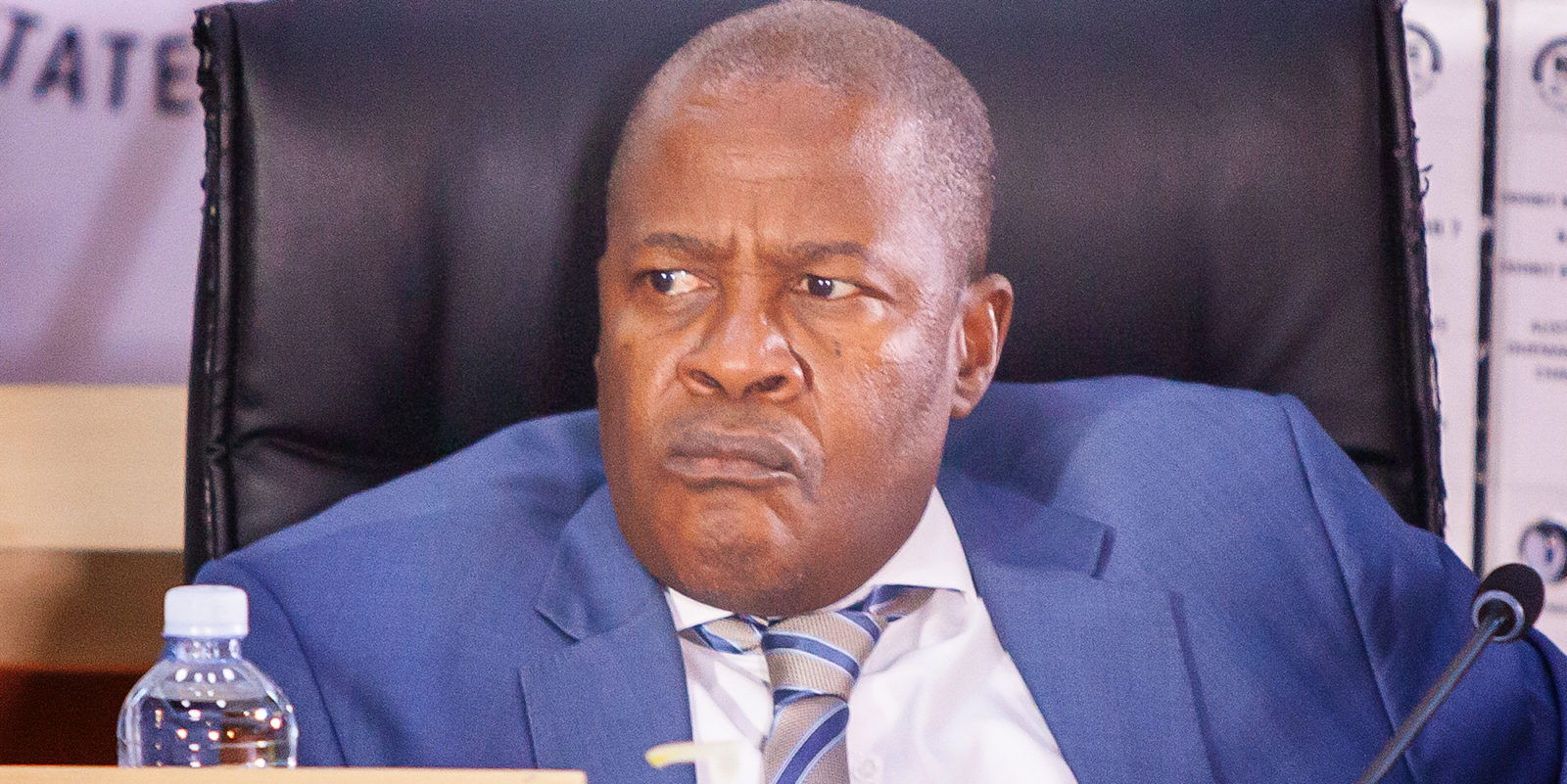 Former Transnet and Eskom chief executive Brian Molefe continued to claim innocence at the State Capture Commission on Wednesday, but he was presented with a litany of failures he found hard to deny.

Returning to the State Capture Commission on Thursday, former Transnet chief executive Brian Molefe asked to “cut to the chase”. He quickly dismissed allegations that in 2014 he misled the Transnet board and inflated the cost for the logistics company’s 1,064 locomotive acquisition programme, which is alleged to have led to billions being paid to Gupta front companies.

Experts have called the increase unjustified and estimated the deal was worth around a maximum of R45-billion.

Molefe was testifying on Transnet-related evidence for the third day running after appearing on Eskom issues last week. He has consistently denied allegations of wrongdoing, claimed there’s no evidence linking him to corruption, said he acted on memos prepared by his colleagues and at times declined to comment.

Molefe maintains no serious evidence of corruption has emerged, but the last three days have highlighted his serious failings as a CEO, how at times he made unilateral decisions without regard to procedure and at other times blindly signed memos given to him by staffers.

“This number, the R38.6-billion, was a desktop estimate and it was not even arrived at by phoning suppliers around and saying, ‘How much do you think you will sell us a locomotive for?’” Molefe explained on the 1,064 deal.

“It had to be a conservative desktop estimate,” he said, claiming that Transnet had to set a low base for negotiations with bidders.

“We went out on tender with an ETC of 38-billion. The tenders came back, when they came back they were nowhere near R38-billion.”

Molefe described the cost increase as part of doing business.

“There is no one, Chairperson, who sat in a room and just,” he clicked his fingers, “increased the price from R38-billion to R54-billion, costing the taxpayer R15-billion. Nothing like that happened. It is a fundamental misunderstanding of the process and what happened.”

Molefe said suppliers’ quotes to Transnet averaged around R43-billion to R44-billion. Transnet wanted to lock in a fixed price, which took the costs to R49-billion. Then it added 10% for contingencies, “unforeseen things, like acts of God”, said Molefe, taking the total cost to R54-billion.

The former chief executive appeared frustrated with what he seemed to view as the commission’s lack of understanding of the business world, but evidence leader Anton Myburgh, SC, walked him through various steps of the deals, irregularity by irregularity.

The first issue was whether Molefe misled the Transnet board on the R38.6-billion ETC. His submission for approval to the board specifically said hedging and foreign exchange costs were not included.

He admitted on Wednesday that the ETC submitted to the board had included hedging and foreign exchange costs.

“My understanding, to put it crudely, is it didn’t really matter,” he said, maintaining that the ETC was aimed at starting negotiations at a low price with bidders.

Myburgh added, “The allegation, as you know, is that you misrepresented the ETC to the board when saying it excluded hedging and escalation when it in fact included it.”

Molefe admitted he may have misled the board but he maintained that it was not intentional and of no consequence.

When Molefe went back to the board to approve the increase to R54-billion, his report said those hedging and foreign exchange costs accounted for 59% of the increases.

“In other words, what’s presented to the board is that this massive change in the ETC is attributable, by and large, 59%, to the fact that we initially excluded these costs and now they’re being included, which you accept is wrong. Your own case is they were included initially,” said Myburgh.

Myburgh presented two opinions that found the total contract cost should have come to a maximum of around R45-billion. Molefe dismissed the experts’ evaluations and highlighted that their estimates differed, albeit slightly. He suggested the difference between R45-billion and R54-billion was a matter of subjective analysis.

The Transnet executive was required to get the public enterprises minister’s approval for the deal and it was given, at least for the R38.6-billion ETC. Molefe participated in getting that approval but did not get approval for the increased R54-billion, as required.

“I can’t recall what my state of mind was at the time,” he explained, noting his legal and compliance team’s role.

Myburgh responded, “I take it that if you accept that legal and compliance failed to obtain ministerial approval, you as the group chief executive must carry that can. It’s not something that you can just palm off to legal and compliance. You bear the ultimate responsibility.”

Asked how he could make such a blunder, Molefe responded, “Because I’m human, Chairperson.”

Transnet and the Special Investigating Unit went to court this week to set aside the logistics company’s 1,064 locomotive contracts. Their court papers say, “that the laws, government instructions and Transnet policy were deliberately ignored to make the tender awards, conclude the contracts and effect payment to some of the [manufacturers]”.

AmaBhungane has reported that the two Chinese companies involved, CSR and CNR, agreed to pay R9-billion in kickbacks to Gupta shelf companies.

The commission has heard evidence that Regiments was advising Transnet at the time and half of the money it was paid was laundered through Gupta lieutenant Salim Essa’s shelf companies.

Myburgh presented Molefe with evidence that CSR, which was awarded a contract to provide 359 of the 1,064 locomotives, had agreed to pay Essa’s firm Tequesta 21% of the contract price to secure its contract with Transnet.

Molefe said he couldn’t comment on the claim or whether Regiments had advised Transnet on the 1,064 bids.

Molefe has denied or declined to comment on testimony that Tony Gupta and Essa had said he was in their pocket.

While confirming much of the evidence from “Witness One”, Molefe’s former driver at Transnet who has remained anonymous due to threats on his life, Molefe denied the witness’s testimony that he saw Molefe’s bag half-full of rolls of R200 notes.

Molefe emphasised that the driver never said that cash, which supposedly was never in his bag, came from the Guptas.

The former CEO said he might have asked the driver to deposit cash, which the driver said ranged between R5,000 and R20,000, in bank accounts, but he said those transactions were linked to his role as treasurer of the Mmaphala Burial Society and other personal matters.

Molefe also faced questions on other puzzling decisions he made as Transnet CEO.

He agreed to pay his former Transnet colleague Siyabonga Gama R17-million in legal fees, despite Gama losing the case against his dismissal.

Molefe agreed it was odd and suggested it had been recommended to him by his team.

Then there was the settlement Molefe signed with General Siphiwe Nyanda’s security company Abalozi. Abalozi wanted R95-million for being unjustifiably blacklisted by Transnet. Molefe said he’d seen evidence that Transnet officials had hidden evidence of the company’s work with Transnet that led to its blacklisting, which justified the settlement.

But then Molefe signed an agreement to pay Abalozi’s stakeholders, including the company’s founders who had nothing to do with the dispute, an extra R20-million above the settlement agreement.

Zondo said he was shocked that Molefe, the former PIC boss, could sign either the Gama or Abalozi agreements.

Molefe once again dithered, suggesting he signed what was put in front of him.

He concluded his Transnet-related testimony on Wednesday afternoon. Gama is expected to testify on Thursday. Singh and former minister Malusi Gigaba are expected to follow. DM