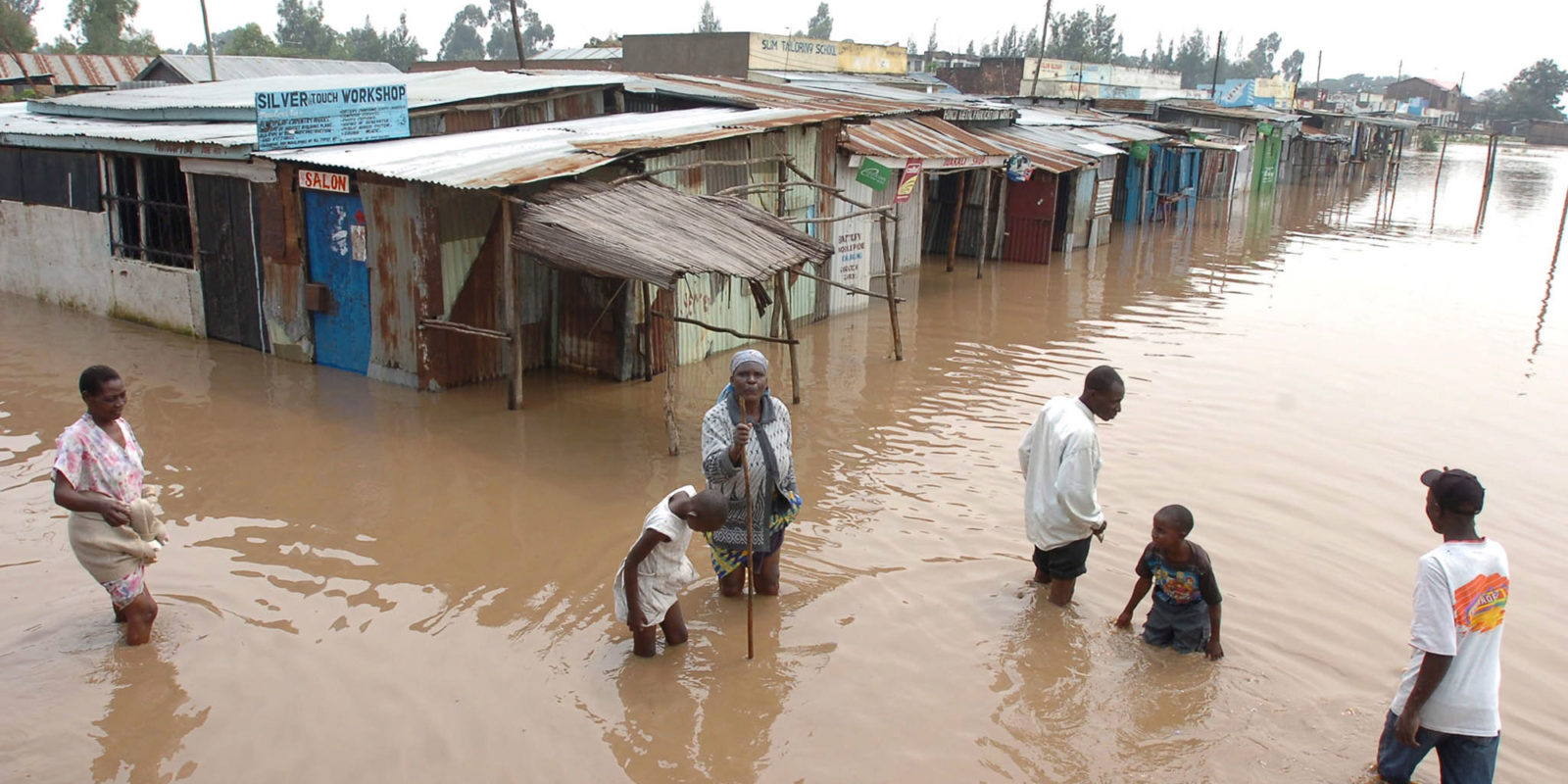 Villagers go about their business in a flooded market centre in Kisumu, about 400km west of the capital Nairobi in Kenya. (Photo: EPA / JACOB WIRE)

The gradual increase in global temperatures, as well as the increase in erratic rainfall and flooding, have indirect, complex and interlinked implications for peace and security.

On Tuesday, 9 March, the African Union Peace and Security Council will debate how the climate crisis is affecting peace and security and what to do about it. While climate change increasingly undermines human security and influences the dynamics of violent conflict on the continent, there are no hard peace and security solutions to the security impacts of climate change. The African Union and African societies can, however, improve how they prevent and manage climate-related security risks by investing in preparedness, analysis and early warning. This will require further integration and coordination, including informing a common African position on climate-related security risks for the climate negotiations at the UN Climate Change Conference in Glasgow in November.

Peace and security risks of the climate crisis

The African Union Peace and Security Council meeting is not about influencing the long-term effects of climate change that are the topic in Glasgow, but instead it is about managing the immediate impact on insecurity and conflicts in Africa. Though there is no direct causal relationship between climate and conflict, there are multiple pathways through which climate change interacts with political, social and environmental stresses to compound existing vulnerabilities and tensions. In other words, how climate change affects societies has also a lot to do with how people respond to climate change. The choices governments but also communities make in the wake of climate change can increase or decrease the risk of violent conflict.

The gradual increase in global temperatures, as well as the increase in erratic rainfall and flooding, have indirect, complex and interlinked implications for peace and security, because they significantly disrupt livelihoods and food security, and may result in forced displacement and migration. Climate change exacerbates vulnerabilities and weakens the resilience and adaptive capacity of agriculture-dependent communities. Female-headed households are especially vulnerable to the effects of climate change, as most are dependent on agriculture to sustain their families and rely on natural resources like firewood and water.

Across the Sahel, South Sudan and Somalia climate change and existing conflicts also affect the risk of clashes between herding and farming communities over access to land, water and pastures. The reason is that climate change affects pastoralist travel routes bringing them in closer proximity to farming communities, causing tensions over land, grazing, water and communal conflicts. In other cases, displacement can make youth more vulnerable to recruitment by local militias or armed groups. Disruptions caused by the effects of climate change can create opportunities for organised criminal and armed groups. For example in Somalia, al-Shabaab has at times positioned themselves as service and relief providers following droughts and floods.

What can the African Union Peace and Security Council and others do about it?

This inevitably requires ownership and expertise by Africa. The African Union, as well as Africa’s regional economic communities, governments, civil society, and research institutions can enhance their knowledge about climate-related security risk. The AU’s Continental Early Warning System can thereby inform and streamline the collection of key indicators. Local communities affected by climate change and conflict, need to be given opportunities and resources to participate in these processes.

Improved knowledge should also inform national climate adaptation plans to make adaptation processes conflict-sensitive, by taking climate-related security risks into account. Closer collaboration between ministries and agencies in the security sector and those dealing with environment and food security is critical. Africa has significant expertise in this area that needs to be leveraged and mobilised to inform and support decision-making.

Lastly, the African Union and others responsible for peace and security should develop a set of tools and instruments that can be deployed as soon as potential conflict is anticipated. These can include the strengthening of traditional conflict resolution and justice capacities as well as investment in local capacities for peace, leveraging the resilience of youth, women and traditional capacities. Most of these tools and instruments can be used regardless of the specific trigger, but the stakeholders engaged will differ depending on the conflict drivers and response mechanisms thus need to be adapted to context.

By taking these steps the African Union, African governments and civil society are investing in their collective resilience to better prepare for the impact of climate change on peace and security. Of course, the most effective long-term prevention against the worst effects of climate change is the reduction of carbon emissions. The African Union Peace and Security Council should inform a common African position for COP26 on the urgency to reduce Africa’s exposure to climate change and the resulting climate-related security risks. DM

Dr Cedric de Coning is a research professor with the Norwegian Institute of International Affairs, and a senior adviser for the African Centre for the Constructive Resolution of Disputes. He tweets at @CedricdeConing

Dr Florian Krampe is a senior researcher and director of the Climate Change and Risk Programme at the Stockholm International Peace Research Institute. He tweets at (@FlorianKrampe