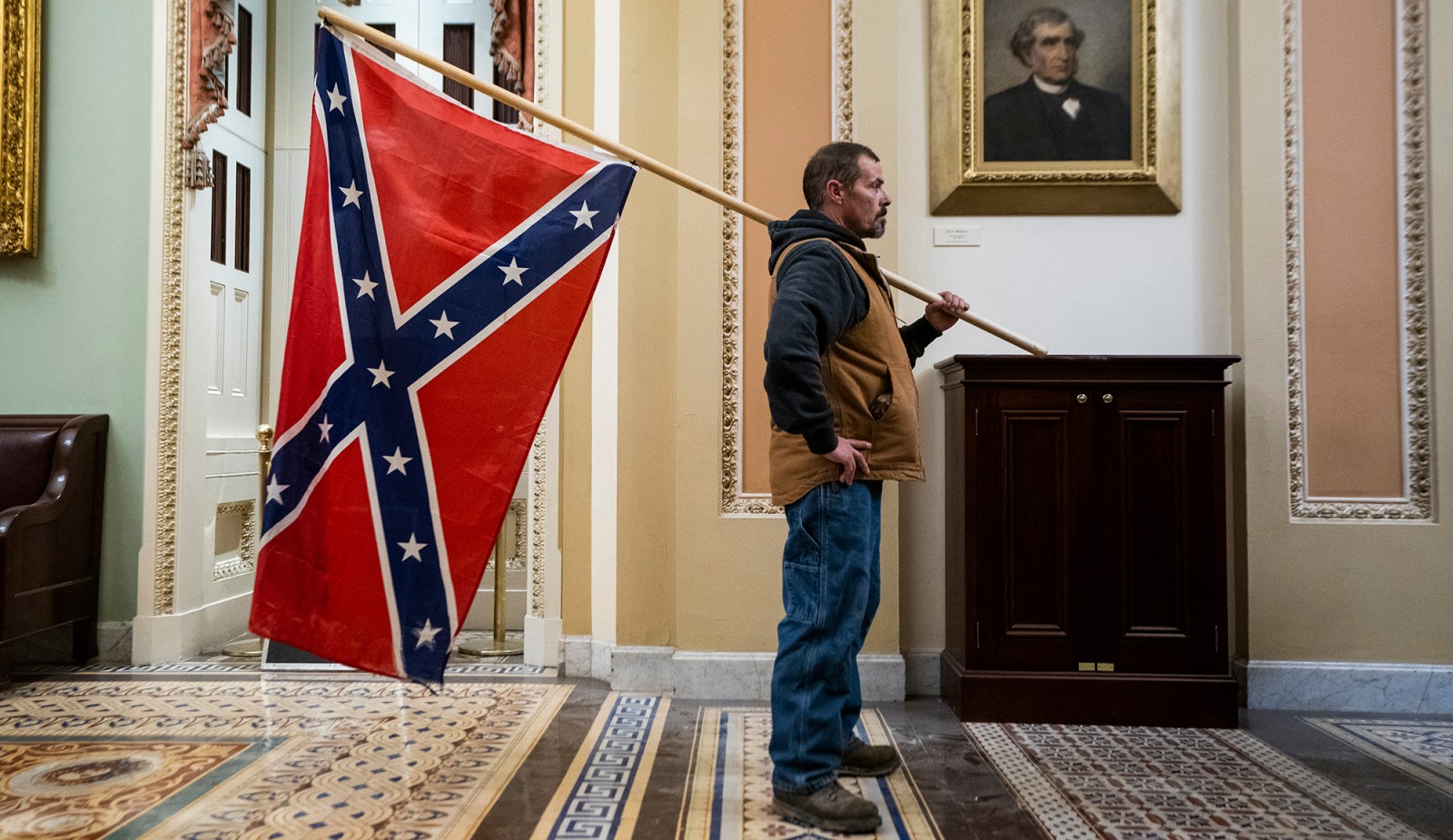 Supporters of former president Donald Trump and his baseless claims of voter fraud breach stand outside the Senate chamber during their protest against Congress certifying Joe Biden as the next president in Washington, DC, on 6 January 2021. (Photo: EPA-EFE/JIM LO SCALZO)

FBI director Christopher Wray, in his first appearance before the US Senate Judiciary Committee since the attack on the national Capitol, says US domestic terrorism has been on the rise for a long time, and flags a ‘unique problem’ threatening the nation.

The Senate Judiciary Committee has oversight of the FBI and is looking for answers around the events of 6 January 2021. FBI director Christopher Wray told the committee that domestic terrorism in the US “has been metastasising around the country for a long time now and it’s not going away anytime soon”. Wray was also very clear that there was no doubt that extremist groups took part in the Capitol riot:

Wray was asked by Democratic Senator Chris Coons if there was any evidence “that the January 6 riot here, the insurrection, was organised by people simply posing as supporters of President Trump?”

He responded that the FBI had not found any evidence to prove that assertion – as pushed by supporters of the former president. He also said there was no evidence that any leftist or activist groups (such as Black Lives Matter) had been involved and that “inspired believers” posed a unique problem:

“More and more the threat that we face as a country is what I would call the inspired attacks. They don’t have formal membership in an organisation, they don’t have clear command and controlled direction in the way that, say, an al-Qaeda sleeper cell might have, and that’s that much more challenging to pursue… then you add into it the sort of First Amendment dimensions of people’s inspirations and ideology.”

While the threat of domestic terrorism looms over the US, the coronavirus is also cause for concern despite increased vaccinations countrywide. Experts are alarmed that not enough is known about the new variants and some states are relaxing Covid-19 regulations, with at least two throwing these regulations out entirely.

The governors of Texas and Mississippi announced on Tuesday, 2 March that they are opening their states, allowing all businesses to be fully operational and dropping their mask mandates. This is despite the Centers for Disease Control and Prevention (CDC) warning a day earlier that while numbers are dropping across the country, people still need to be careful because of emerging Covid-19 variants.

At the daily White House Covid briefing, CDC director Rochelle Walensky said it is of huge concern that states are relaxing protections: “At this level of cases, with variants spreading, we stand to completely lose the hard-earned ground we have gained.”

Making the announcement, Texas governor Greg Abbott said the state – population 29 million – has just recorded the lowest positivity rate and lowest number of hospital admissions in four months. More Texans were recovering from the Covid-19 than contracting it. He said while the virus is still a concern, it is time to open up Texas:

“But make no mistake, and to be clear, Covid has not, like, suddenly disappeared. Covid still exists in Texas and the United States and across the globe, but it is clear from the recoveries, from the vaccinations, from the reduced hospitalisations and from the safe practices that Texans are using, that state mandates are no longer needed.”

Texas is also starting a very slow recovery from the ravages of a week of winter storms that started on 13 February and resulted in about 38 deaths and massive damage to homes and infrastructure of more than $20-million, according to some estimates. Even after the storm passed almost 10 million people needed to boil their drinking water while more than 100,000 had no water at all.

Abbott is probably also under pressure, on the heels of the storm, to get his state’s economy moving to speed up the recovery.

He rescinded previous orders as well as the mask mandate – effective Wednesday, 10 March – and said people needed to take personal responsibility for keeping safe from the virus:

“Despite these changes, remember this: removing state mandates does not end personal responsibility… personal vigilance, to follow the safe standards, is still needed to contain Covid.”

Mississippi governor Tate Reeves also announced the lifting of his state’s mask mandates and the opening of businesses to operate at full capacity. While Texas starts next week, Mississippi starts on Wednesday, 3 March. Reeves tweeted that “hospitalisations and case numbers have plummeted and the vaccine is being rapidly distributed. It is time!”

Starting tomorrow, we are lifting all of our county mask mandates and businesses will be able to operate at full capacity without any state-imposed rules. Our hospitalizations and case numbers have plummeted, and the vaccine is being rapidly distributed. It is time!

He added: “We are getting out of the business of telling people what they can and cannot do.”

US President Joe Biden announced that the country’s vaccination programme is functioning well and that deals have been made to get more vaccine doses faster and enable the entire country to be vaccinated by the end of May. Teachers were now able to start making appointments to get vaccinated because “our goal is to do everything we can to help every educator receive a shot this month, the month of March”.

Biden also warned that “the fight is far from over” and urged all Americans to “please keep washing your hands, stay socially distanced, wear masks”. DM