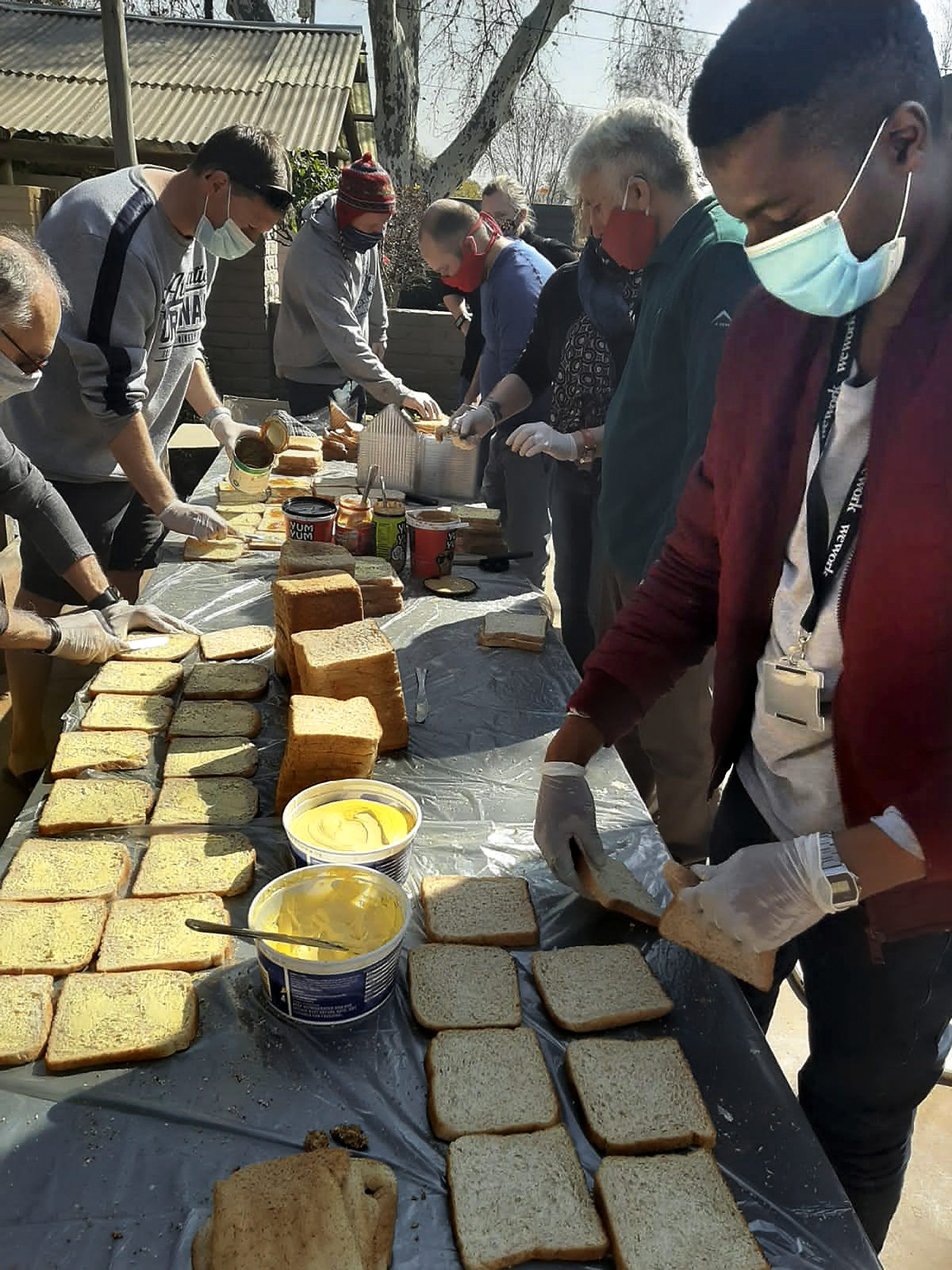 The Norwood, Orange Grove and Houghton (NOAH) Community Action Networks (CAN) made 500 Sandwiches for Mandela Day which were given to learners, a women's shelter and an event for girls to motivate and support them during the lockdown in Berea. (Photo: Supplied by the NOAH CAN)

South Africa is just two days away from marking the anniversary of the first detection of Covid-19 within its borders. Soon too, it would have been a year since Gauteng Together established its first community action network. Only two-thirds of all networks it established are still active. How will they survive in a very different context? A commissioned report has some recommendations.

Most community action networks under Gauteng Together are still active and have expanded their scope beyond their initial goal of providing food relief, according to a new report. However, their sustainability is not guaranteed.

The report was commissioned by the Ahmed Kathrada Foundation to record the progress the project has made and how sustainability can be improved. The Auwal Socio-Economic Research Institute conducted the research and authored the report.

The report was launched on 3 March 2021 with a discussion about how the movement can be made sustainable. Editor of Maverick Citizen, Mark Heywood, provided input as well as various members of the Ahmed Kathrada Foundation and Gauteng Together. Heywood was the executive director of SECTION27 and a founder of the Treatment Action Campaign and Corruption Watch, among others.

The Gauteng Together initiative launched in April 2020 by the Angel Network, Ahmed Kathrada Foundation and CONECKT to address the social impact of the pandemic.

The Ahmed Kathrada Foundation encountered Cape Town Together during a national civil society roundtable, said the foundation’s board member Lucky Nkosi. He added that the foundation decided to replicate their model, but modify and enhance it for local implementation.

It joined forces with the two other organisations, as they intended to do something similar. Within two weeks, Gauteng Together was established. It has since grown into at least 45 different community action networks (CANs).

Each individual CAN identifies needs in its community and acts on them — whether by distributing food or making sure crucial services remain open. It works in collaboration with existing organisations, including other CANs, and helps people to access correct information about the pandemic as well as access places to self-isolate.

It works on the belief that through organising at the local level, the community can be assisted to adapt and survive the Covid-19 crisis.

The report found that 67% of the 45 CANs are still active and 33% have ended their work. Some were more sustainable than others.

All 45 CANs started out with a focus on food relief, which shows the urgency of the need to provide food, commented Kristin Abrahams of the Ahmed Kathrada Foundation when presenting the report during the launch.

The network was set up by people who stepped away from their day jobs — they were ordinary people who created something great, she said.

Some later began to also distribute blankets, clothes, PPE and toiletries. By November 2020, two-thirds of the CANs were still active.

About 60% of these said they had continued with the activities they had started with. Some said their focus shifted to more sustainable projects, such as food gardens, and others expanded the list of goods they distributed. Others took a more targeted approach, like supporting local soup kitchens rather than delivering food parcels.

About 79% of these CANs said they felt they had a positive impact on their communities.

The third that ended their work carried out their activities for at most six months. A lack of resources was the main cause, while others said organisers had to return to work and school.

Almost all 45 CANs said they faced numerous challenges in their work. Some community members did not understand what the initiative was trying to achieve.

Resources such as time, donations and supplies were hard to come by and demand outstripped their supply. Covid-19 regulations and the threat of contracting the disease complicated logistics such as getting volunteers and distribution.

Almost all of the initiatives attended co-learning workshops and the vast majority said they found it helpful. However, those who attended were from CANs who were well funded and resourced — therefore, already struggling CANs missed out on the valuable information and help.

The majority felt supported by Gauteng Together to unite the CANs and provide them with training, guidance and structure. However, many requested more communication and funding.

They urged Gauteng Together to be more mindful when they organise events that many CANs are financially stretched. They suggested that Gauteng Together and CANs should register as NPOs to access more funding and work more closely with government. In addition, representatives from the CANs should sit on a steering committee to improve decision-making.

The steering committee believes the need for CAN members to be part of any decision-making body is “of paramount importance,” said Abrahams. As a result, a working group has been established and will take the recommendations forward.

Commenting on the report, Heywood urged that the report has to be the beginning of the conversation of what CANs can achieve. Another forum needs to be set up to continue it.

He reminded the CANs that we are only one year into the Covid-19 pandemic — the first anniversary of the first instance of Covid-19 is just two days away, on 5 March 2021.

“I say this because everyone is feeling exhausted and fatigued. It’s important to keep a sense of time and perspective both on the civil society response to the pandemic and the pandemic itself,” he added.

What is missing from the report is the fact that “your work saved lives, kept hope alive and allowed people to continue to protect their dignity and livelihoods. All of those factors must never be forgotten and lost sight of as you face these questions of where do we take things in the next phase,” he said.

The CANs were created to respond to an emergency in the midst of lockdown — now, they exist in a context where more waves of infections are coming, vaccines are slow to be administered and social grants will soon end, he pointed out. He asked the CANs to discuss this between themselves as their work remains “absolutely essential”.

The report flagged a shortage of funding as a major obstacle. Heywood questioned how it is possible that the Gauteng government can spend millions on fumigation, yet CANs scramble for a few thousand rand. “When it comes to funds, how do we politically claim a space that the CANs occupy and their rights to funding to do this essential work without creating dependence on governments that are dysfunctional?”, he asked.

He commended the “magic” and “energy” which emanates from their community-level action and their excitement at the possibility of creating a different system. Continuing with education within the network can keep this inspiration and energy alive, as seen with the Treatment Action Campaign which was seen as a “university” by its members. “When we had knowledge, we found we had power,” he said.

In moving forward he said CANs should not become “bodies which are based on feeling sorry for other people and charity,” but should understand that they are fighting for human rights.

“Charity is always fickle. Charitable people often run out of energy and it’s easier to go back to their own lives. This is a struggle about reconstituting society,” he concluded.

A member of the Gauteng Together working group, Monde Ntebe from the Wattville CAN, agreed with Heywood that the conversation needs to continue and the working group can facilitate this.

The group was formed in December 2020 during a meeting in which CANs discussed the future of the movement, says Julia Eccles, a member of the group and a representative from Killarney CAN.

“The previous steering committee, which contained a number of representatives from the Kathrada Foundation, was dissolving as most of its members had other duties to fulfil,” she said.

“The idea behind this change was for CANs to form the committee ourselves and determine the future direction of the network, while also making the structure ‘flat’ and removing some of the bureaucratic features. So, it was a shift from having it run by organisation(s) and rather have it run for and by CANs themselves.”

She pointed out that this is in line with the report’s recommendations.

The group meets once a week and is made up of volunteers from CANs from Tsakane, NOAH (Norwood, Orange Grove And Houghton), Wattville, Killarney, Maker’s Valley, Parkhurst and Windmill Park. Its terms of reference will be ratified by the CANs within the next two weeks, said Ntebe.

It will be made up of a number of workstreams, which will focus on areas as diverse as ethics to fundraising. Within the initiative, communication portal groups will be set up where members can exchange information on specific topics.

In addition, different CANs will be grouped into “integrated zones” to encourage collaboration, community and connection between them. This way, they can tackle area-specific problems and projects together.

This year, Gauteng Together will reorientate the work of the CANs into a “critical mass disruption agenda” through the integrated zones to set up a CAN in every neighbourhood to “save the soul of the nation”. MC/DM