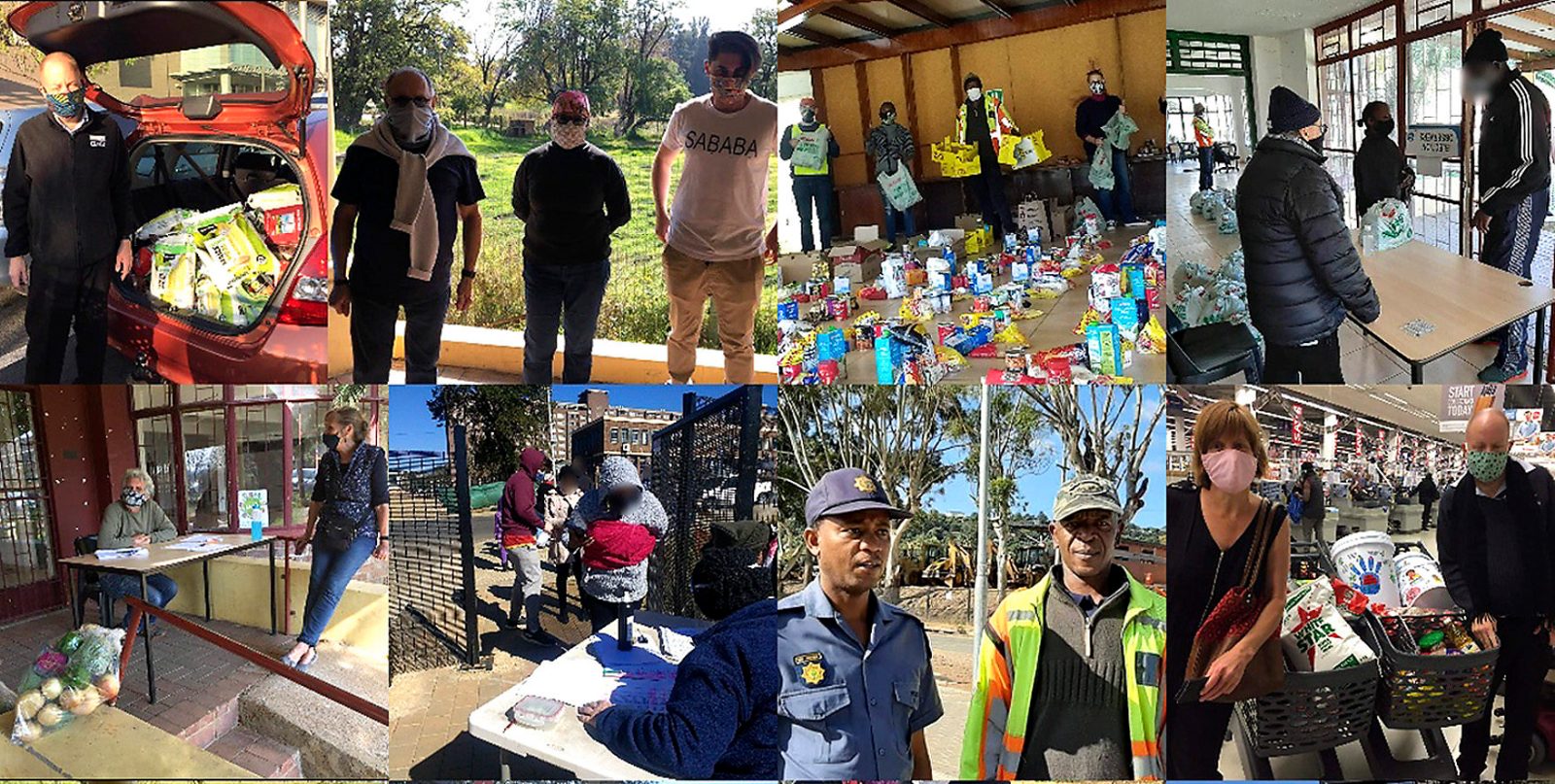 Volunteer teams. (Photo: Supplied by The NOAH CAN)

Today Gauteng has over 100 community action networks, all of them made up of organisations and individuals who are trying to provide relief in the face of the humanitarian crisis unravelling in their communities.

Norwood, Orange Grove and Houghton are suburbs of old Johannesburg. Their roads are marked by stately homes or, in the case of Orange Grove, rows of squat and neatly laid out houses. The suburbs have famous landmarks, like the Radium Beerhall and former nightspots like Grant Avenue, a road still lined with the relics of pavement coffee shops, second-hand bookshops and old hotels.

Over the last 30 years years, the demographics of these areas have changed greatly. The upwardly mobile moved north; their places get filled by people spilling over from the inner city or the townships.

However, these middle-class suburbs are not typically associated with hunger. Since the start of the Covid-19 epidemic that’s changed.

But concerned community members are resisting.

In March, with the lockdown looming, a small group of residents got together to form the Norwood, Orange Grove and Houghton (NOAH), Community Action Network (CAN). NOAH soon joined a larger network of CANs that was launched in April, known as Gauteng Together. Today Gauteng has over 100 CANs, all of them made up of organisations and individuals who are trying to provide relief in the face of the humanitarian crisis unravelling in their communities.

A few weeks ago, a chance meeting inside a pharmacy with one of the driving forces of NOAH, Emily Wellman, opened the CAN of this new world.

Wellman is one of those eternal do-justicers, the daughter of veteran journalist Peta Thornycroft (who has reported from the frontlines in Zimbabwe). She had pavement-stopped me to decry the hunger stalking the area and to seek my ideas on where financial resources might be found to meet the growing need for food parcels.

Wellman told me how “so far, our community has been incredibly generous through donations” but, she lamented, “the demand is vast and growing”.

By the date of that pavement chat the NOAH CAN had identified 1,121 families who, Wellman said, literally had nothing to eat. By Thursday 2 July that number had grown to 1,415. Wellman tells me how “as the weeks of lockdown progressed” they observed the enormity of desperation grow.

“Now new people are joining the list hourly, it’s a fair assumption that soon we will be trying to keep 6,000 people from slipping into a medical crisis.” 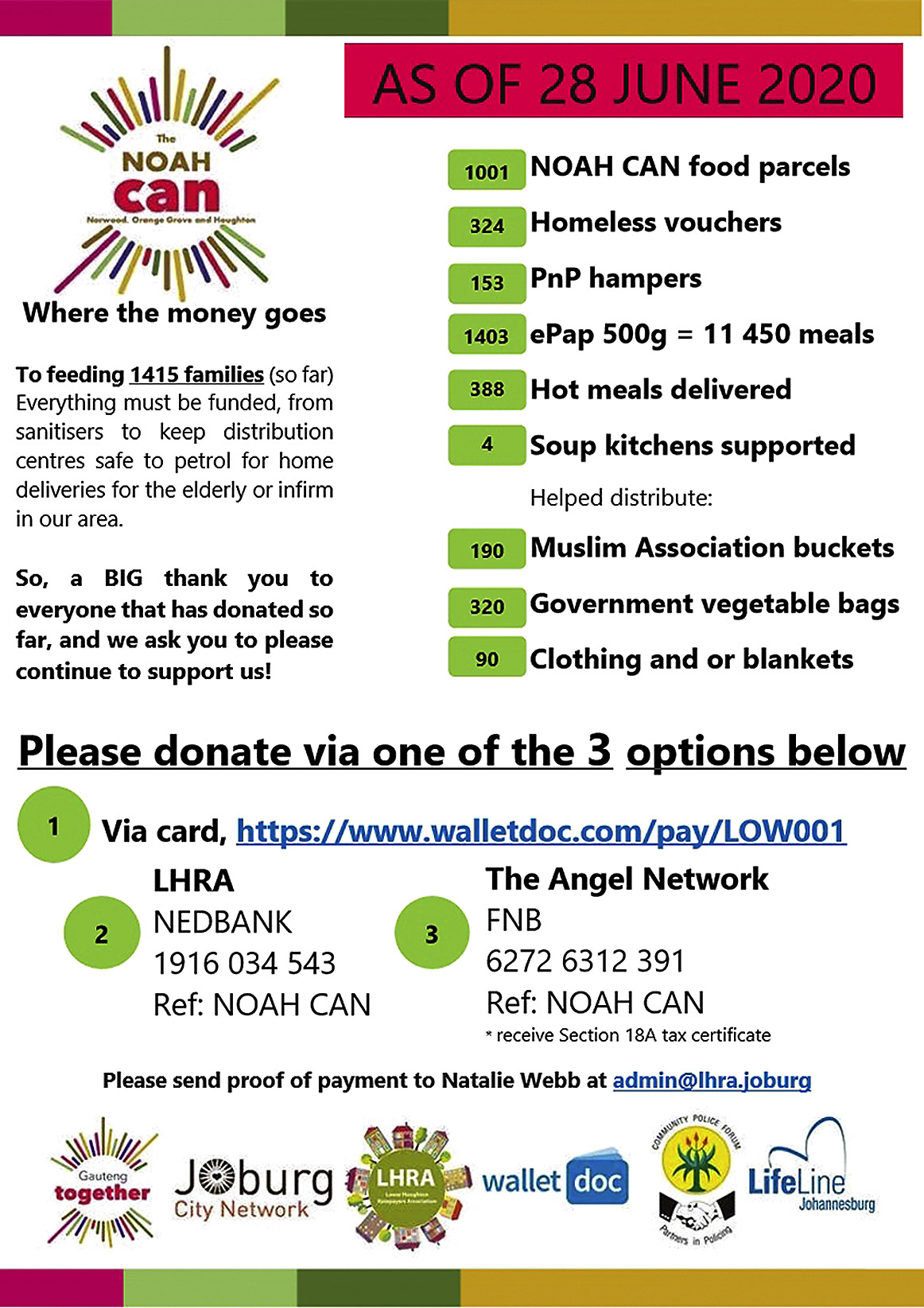 Describing hunger as a “medical crisis” is not mistaken. Many of the hungry are children and the elderly who are especially at risk of malnutrition. Others have co-morbidities like HIV or TB and need to take their medications with food. There can be very bad side-effects of consuming some drugs without food.

“We fear that people may decide to forgo their critical medications until they can ‘restart’ their lives and buy food for themselves. We don’t need to tell you how disastrous this will be for those on ARVs and other drugs where there is a risk of resistance or treatment failure by stopping taking meds.”

Having recently become an expert on the anatomy of local hunger, Wellman describes how apart from the “traditionally needy like the homeless and elderly” who register via the ward councillor for the government’s erratic supply of food aid, “a new kind of beneficiary” is joining the hunger list.

“These are individuals who have not previously needed assistance from the state. They are self-employed, commission-based earners, waiters, domestic workers and small businesses that have not survived the economic halt to their earning ability.

“Being cash-based they do not have access to credit and have no savings. Without earning, buying food is impossible. Some are falling perilously close to the beginnings of malnutrition and related health problems.”

There are also foreign nationals who are being bypassed by official relief schemes and instead get dished up another dose of administrative xenophobia.

Sharon Ekambaram, another volunteer, is at pains to point out that “those registering for food are not means tested. This ensures the dignity of people trapped into poverty by the lockdown.  You are not asked to prove you are poor.”

The task is daunting, but human ingenuity often thrives in a crisis. In a short time the NOAH CAN has developed administrative systems, databases, media strategies and localised plans. It’s a small group of barely 20 unpaid volunteers, who are mostly womxn, but they have already saved lives and kept hope alive. As of 28 June their shifting team of volunteers had distributed:

In addition NOAH volunteers have delivered hot meals, supported four local soup kitchens and assisted the Muslim Association and the Department of Social Development with other initiatives for food and clothing distribution.

Wellman explains how “emergency food relief is only part of what we are doing”. She thinks that “situating ourselves as a food bank is neither sustainable in the long term, nor helpful”.

As a result, the NOAH CAN team are looking at various options, both in terms of community collaboration and effective, achievable results. This includes the development of community food gardens, skills upliftment workshops run by experts who would donate their time, or by community members themselves.

In addition, the CAN is undertaking a detailed needs analysis of “the hopes and needs of our community. Finding out what skills reside in our community will go a long way to finding a local and unique solution. The dignity of an individual is restored through contributing rather than just receiving.”

Wellman calls it a “hand up rather than just a handout” approach, linked to a noble but plausible vision of creating “a circular economy within our area where locals buy and sell to each other and skills and jobs are created by our residents.”

So far, NOAH’s work has prevented starvation from taking hold in some of the less mean streets of Johannesburg.

The immediate problem though is that just as Covid-19 tightens its grip on Gauteng and particularly its inner-city suburbs, the financial donations are running out. On 27 June a post on the NOAH Facebook page announced:

“We are running perilously low on funds. 😢😭 Please help us continue to help those that so desperately need support to prevent them falling into a health crisis brought on by food insecurity and starvation.”

Tragically, what is happening in the NOAH catchment area is indicative of a deepening social crisis across the country. Just as the need grows it seems Covid-19 fatigue is setting in. Although I have helped in successfully in raising money for NOAH, I had also received “no money available” responses from people and places I thought would be quick to the rescue.

Desperation is growing because the government Covid-19 relief package is proving to be a more-miss-than-hit affair. Batho Pele has gone on holiday and many penniless applicants are confronted by denied or delayed grant applications. The Solidarity Fund and Sassa have ended food-parcel distribution and the Solidarity Fund’s voucher relief system will only get going at the end of August. And, as restaurants and pubs, which are big employers in Norwood and Orange Grove, will remain shut for the foreseeable future, people’s opportunities to earn incomes remain closed.

It could be a bleak picture but it doesn’t need to be. NOAH proves that community action works. Solidarity has been built across race, class and gender. But the volunteers realise that in the coming weeks this community solidarity will be needed more than ever. So far little more than 20 people have made a difference. However, there are still resources and energy waiting to be discovered in the community. Volunteers are needed. DM/MC

If you would like to support the NOAH CAN, easy, safe card payments can be made via Wallet Doc: Via card, https://www.walletdoc.com/pay/LOW001 or bank deposit:

LHRA, NEDBANK, Acc: 1916 034 543, Ref: NOAH CAN. Please send proof of payment to Natalie Webb at [email protected] If you would like to volunteer time and energy write to: [email protected]

This is the first of a “Yes We CAN” series that will feature the work of Community Action Networks and other structures that focus on local activism and solidarity. If you have a story to tell or a good practice that needs sharing please share it with [email protected] 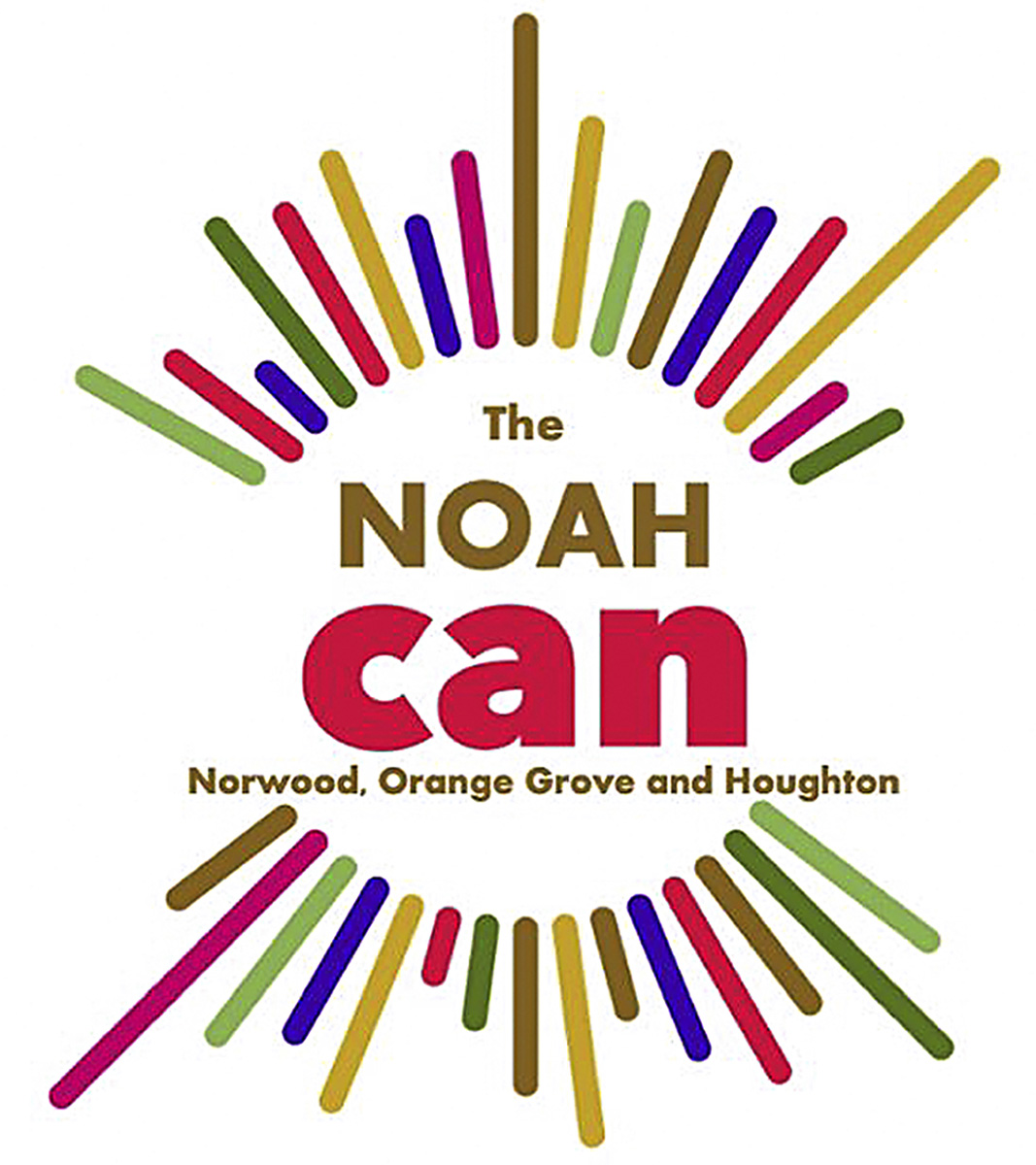