Standing up for the pangolin, the world’s most traffi... 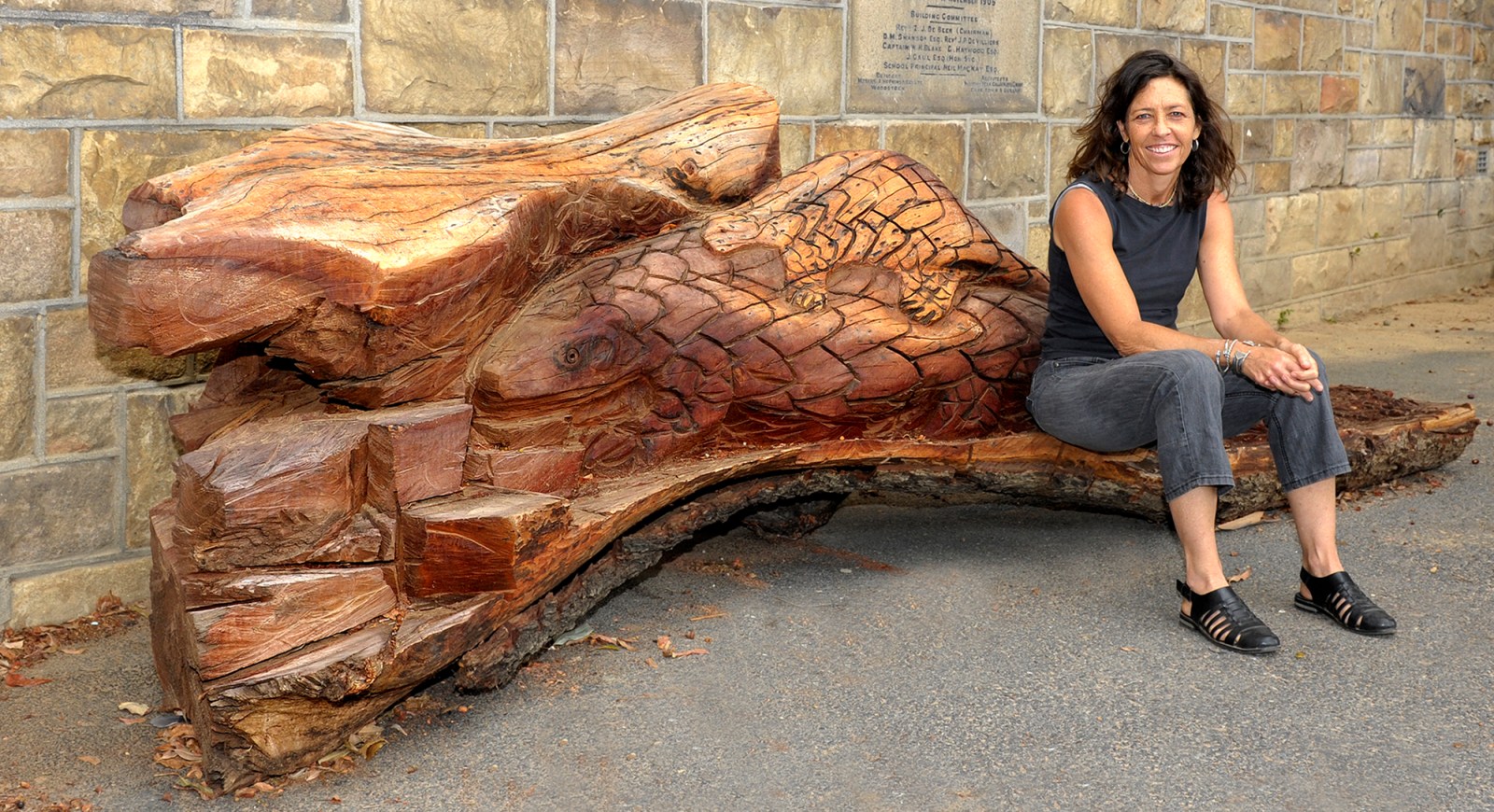 Chainsaw sculptor Noel McCully perches on the pangolin mother and baby she carved out of a fallen wild plum tree that landed up on the grounds of Queens Park High School in Woodstock, Cape Town. World Pangolin Day was on 20 February 2021. (Photo: Joyrene Kramer)

In February last year, Daily Maverick broke the story linking pangolins as the likeliest vector of Covid-19 via bats to humans. The exact source has not been confirmed yet, but the attention, though it comes from panic and fear, might be the best thing that ever happened to what has been called ‘the most trafficked mammal you’ve never heard of’.

It has been a big year for the pangolin: the glaring stage light of Covid-19 has fallen on this shy, scaly mammal as the possible source of the virus that has brought the world to its knees.

In February last year, Daily Maverick broke the story linking pangolins as the likeliest vector of Covid-19 via bats to humans. The exact source has not been confirmed yet, but the attention, though it comes from panic and fear, might be the best thing that ever happened to what has been called “the most trafficked mammal you’ve never heard of”.

Cape Town novice chainsaw sculptor Noel McCully didn’t know much about pangolins until they became news last year. She began reading everything she could find about the small, shuffling, mostly nocturnal animal that had wandered on to the world stage.

The spread of the virus coincided with the beginning of a new direction for this architect and landscape designer, who had begun carving small logs into various forms.

McCully lives near Queens Park High School in Woodstock, Cape Town, where a wild plum tree had fallen during a storm a few years earlier. As soon as lockdown eased, she asked the school whether she could carve it.

“I wanted a pangolin. I thought it might be a way to make other people think about pangolins too.” As the pangolin emerged from the plum, the children’s curiosity grew. Now the 1.3-metre high and more-or-less 3m-long mama pangolin with her baby clinging to her back is enjoyed as a public artwork.

Pangolins are one of the most peculiar animals in Earth’s rich store of fantastical creatures because they look reptilian but are in fact mammals. They’re smallish, about the size of a medium-sized domestic dog, and are covered in scales from head to tail.

Richard Peirce, conservationist and author, has written a book about pangolins released this month called Pangolins – Scales of Injustice. In the book’s foreword, Professor Ray Jansen, founder and chair of the African Pangolin Working Group, says that pangolins “hold the title as being the most sought-after traded mammals in the world”. Their scales are ground up for use in remedies and their meat is an expensive delicacy. Asian pangolins face extinction, meaning that African pangolins are now being targeted.

“In 2018 alone, 97 tonnes of loose scales were intercepted leaving the African continent; this equates to more than 160,000 African pangolins destined for traditional cultural practices of the East. If one considers that these intercepted consignments represent a very small proportion of the actual undetected trade, African pangolins face a bleak future.”

Peirce’s book reads like thriller fiction, starting with two men waiting in two cars in a Pretoria mall parking lot for the illicit handover of a pangolin smuggled in from Zimbabwe. From here, the author unravels the complex trade in pangolins that tells the story of not just the champions of pangolin protection, but also of the poverty that drives the trade at the lowest end of the system and the greed and avarice that fuels the complex engine at the top end.

It is a riveting international tale of derring-do, committed citizenship, shameless law-breaking, various governments’ ineptitude as well as of ineffectual entreaties on behalf of dwindling animal populations in the face of food and medicinal practices that appear immune to the crisis facing the planet’s biodiversity.

At the centre of it is the pangolin, an animal that appears to endear itself deeply to those who do not hunt or eat it, partly because of its gleaming blueberry eyes, partly because it is so gentle.

Peirce’s narrative is a thorough investigation of pangolins: trade, science, pangolin health and conservation. But it tells a bigger story too about the constant clashing between humans and their environment, about human folly and human courage.

Enormous efforts have gone into raising money for rhino conservation in recent years and perhaps McCully’s art and Peirce’s writing will act as prompts for civil society engagement in conserving pangolins. It’s not just wildlife that is threatened by the consumption of wild animals. Covid-19 has shown us that protecting our wildlife means protecting our own lives and livelihoods.

“Meaningful (and enforced) changes to Chinese and other Southeast Asian countries’ wildlife consumption laws,” says Peirce, “could avert another, perhaps even worse, pandemic in the future.” DM168