#DemLoot was made for talking: The Zimbabwe struggle song of a new generation 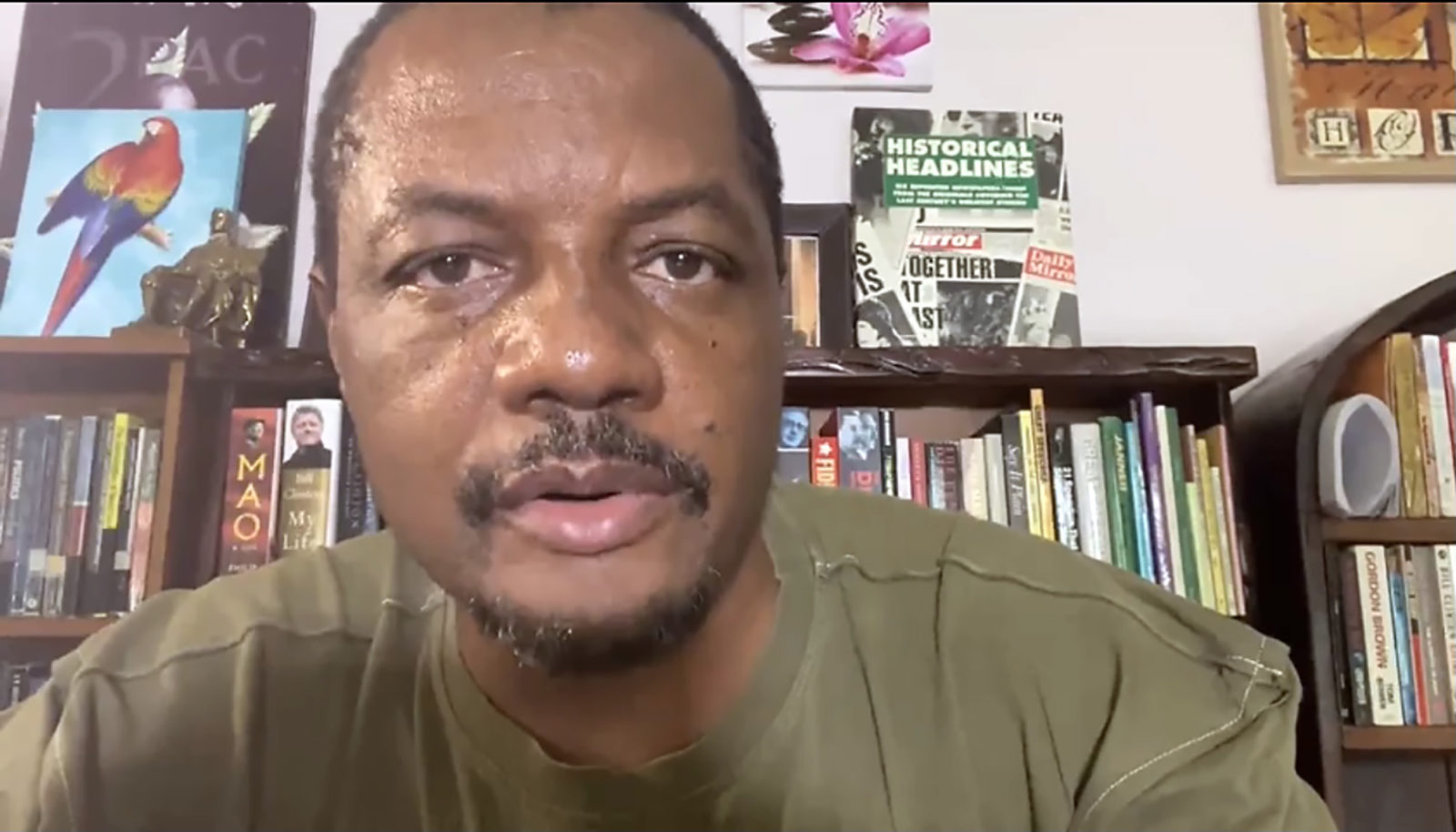 The ‘Dem Loot’ song by Zimbabwean journalist Hopewell Chin’ono appears to be resonating among the youth and corruption-conscious compatriots and is serving as a catalyst for conversation and activism.

What likely started off as social media banter by Zimbabwean journalist Hopewell Chin’ono after his release on bail from Chikurubi maximum security prison towards the end of January 2021, has struck a reactive chord in Zimbabwe and abroad.

“Find me a good music producer, we must sing AGAINST LOOTERS and them out of town!”, Chin’ono tweeted with teary laughing emojis as his idea of singing came into life. Many responded and word soon spread like a veld fire.

Daring to go into a recording studio and sing about Zimbabwe’s socio-economic woes, Chin’ono released Dem Loot — a musical rendition detailing the plight of ordinary citizens as the country’s economy continues on a steep decline, due to endemic corruption by government officials and alleged cartels.

Many folks asked for a studio version of the #DemLoot song.
I can’t do everything alone.

Folks offered to pay, now let us see how serious we are about this.

A local studio offered to produce it for $700.

Can someone put their hand up to set up a Go-Fund for studio costs?! pic.twitter.com/NFKNe4POS9

Using his social media platforms on Twitter and Facebook, Chin’ono recorded and released a 55-second song using an old-school reggae dancehall beat from the ’90s. Literally translated, Dem Loot means “they are looting”.

Speaking to Daily Maverick, Chin’ono said, “What I’m simply doing is giving information out about reasons our situation is terrible in Zimbabwe. We don’t have public hospitals working as a direct consequence of looting of public funds and plunder of our nation’s natural resources.

“By using art forms like music to express what’s happening is actually helping people understand their demise and that way they factually engage with public life and authorities with information on their fingertips,” Chin’ono said.

The socio-political lyrics of the song call on citizens to hold the government to account by focusing on unanswered questions relating to state funds earmarked for Covid-19 pandemic and how they were abused. In July 2020, President Emmerson Mnangagwa sacked Zimbabwe’s Minister of Health and Childcare Dr Obadiah Moyo after Chin’ono had taken to Twitter to allege the extent of corruption in high places. He was involved in revelations of a US$60-million deal for the procurement of Covid-19 medical supplies by Drax International — a company allegedly linked to the family of Mnangagwa.

Dem Loot has attracted various remixes and versions, which includes mbira and acapella rap among other renditions, at a time when the nation is struggling with the effects of a second wave of Covid-19.

National Coordinator for Zimbabwe National Editors Forum (Zinef), Njabulo Ncube, told Daily Maverick that, “Hopewell has demonstrated through his work as a journalist and anti-corruption activist, literally, that the pen is mightier than the sword.

“His crusading campaign against corruption in government has had the effect of rejuvenating our journalism which, to all intents and purposes, appeared to be captured by the state and big business. Citizens had long lost trust in our journalists but ‘boom’ comes Hopewell”, added Ncube.

Zimbabwe’s post-1995 and millennial generation of citizens, also known in the southern African country as the “Zimdancehall generation”, have seemingly embraced Dem Loot, resulting in a social media challenge, mainly on Twitter, under the hashtag #DemLootChallenge (this on the heels of the Jerusalema dance craze inspired by South African artist Master K’s song of the same name, which became a global phenomenon under the #JerusalemaChallenge trend).

Social media influencer Wellence Mujuru took the challenge of dancing to Chin’ono’s Dem Loot and engaged with other social media users on the issue of plundering national resources in Zimbabwe. This is one of many examples of the viral reaction by Zimbabwean citizens who have used social media platforms to interact on national discourse, away from the often physically heavy-handed response to protests by the state.

Hip hop artiste “Slimthewise” was quick to remix Dem Loot and redid it with his own lyrics, speaking to corruption in Zimbabwe. The Zimbabwean rap star tweeted, “@daddyhope inspired me to this. Hip Hop version of #Demloot, NO TO LOOTERS. No individual is bigger than Zimbabwe.”

Exiled former minister of higher and tertiary education, Professor Jonathan Moyo, added a bit more spice to #DemLootChallenge, saying #DemShoot, was a solemn reminder of the 31 August 2018 post-election violence that ensued after strong rigging allegations by Mnangagwa in the presidential race against Nelson Chamisa.

Others like Gorden Moyo cracked jokes by playing the Dem Loot song as a background on a President Yoweri Museveni meme.

Beyond Zimbabwe, radio stations in the region, such as in Zambia and Malawi, played the song while beyond the continent Channel 4 news aired the hit and remixes from across the globe.

Chin’ono, who does not fall into the “millennial” category himself, has proven that the digital age can stand toe to toe with conventional state-owned broadcasters of information, albeit through alternative channels. His song has connected easily with Zimbabwe’s younger generations, who also happen to be the largest consumers of music — particularly dancehall — in the country.

Twenty-six-year-old Trust Lidi told Daily Maverick that, “Chin’ono is my role model, he is fearless in the face of a brutal and selfish government. Dem Loot will conscientise and equip us with the power to demand accountability from our government.”

Expression of free speech under fire

Zimbabwe has been under the global spotlight for violently suppressing public dissent using heavy-handed statecraft. In June 2020, university student Heather Mpambwa was arrested and detained for allegedly passing derogatory comments about president Mnangagwa in a WhatsApp group. She was later released on bail after spending more than a week in detention.

Human rights lawyer and Chin’ono’s legal counsel Doug Coltart was acquitted in 2020 after being accused of allegedly trying to “subvert a constitutionally elected government” after he was seen in possession of a book, Pedagogy of the Oppressed.

Chin’ono directly links the upsurge in the number of Covid-19 deaths and infections with the theft of Covid-19 funds by the ruling elites. In his song, he traces the high levels of unemployment among young Zimbabweans, detailing the state of hopelessness and despair among citizens at large. Evidently, there is censorship and bias against Dem Loot, especially considering that pro-establishment political songs such as ED Pfee — a Zanu PF slogan from where the song takes its name — received unlimited airplay by state broadcasters.

While foreign radio stations have already sampled the song and dozens of versions have been posted online, Dem Loot is invisible on the publicly funded and state-controlled media outlets, despite constant requests by many Zimbabweans to have it played on air.

“My song makes the regime upset with me because I’m putting information out there and [it] is becoming popular and viral. They might want to punish me for that legally, using state institutions like the criminal justice system,” Chin’ono said.

The outspoken journalist has been arrested three times in less than 10 months, sometimes on flimsy charges relating to the expression of free speech, such as “communicating falsehoods”.

While Chin’ono’s Dem Loot speaks of cartels plundering national resources, The Herald, a state-owned daily newspaper vehemently responded to Daily Maverick’s special report on corruption and cartels by Mark Heywood alleging bias and intent to soil the reputation of Zimbabwe’s government and president.

An excerpt from The Herald article reads, “What is even more telling is, the Daily Maverick, which wrote this biased report, is a South African media house that belongs to the Oppenheimers and their Anglo American media empire, that is very notorious for spreading anti-black stereotypes, to maintain white supremacy in South Africa.

“It would therefore seem, that this racist rag, has decided to use good old South African style propaganda, to selectively tarnish Zimbabwean companies that are not in its orbit of influence”, the article read.

Under the late president Robert Mugabe, legendary musician and Chimurenga music guru Thomas Mapfumo went into exile in the 2000s after the release of his song Corruption. Mapfumo is one of Zimbabwe’s musical heroes with a legacy dating back to the 1970s Rhodesian Bush War when sang revolutionary songs.

Mapfumo’s provocative lyrics suggested that a “free Zimbabwe” was a fallacy, with lines such as “something for something, nothing for nothing. Corruption in the society.” The musician went on to release Mamvemve, which translates to “tatters”, where he sings of how Zimbabwe had been “tattered” by corruption. He sang of the social ills that were indicative of the deep rot which continued to destroy and drive Zimbabwe into an abyss of poverty and dissent.

Chin’ono shares a similar legacy of being “a voice for the masses”, but as a journalist rather than a musician. The multi-award-winning journalist rose to notable prominence in Zimbabwe when he began speaking out on issues of corruption in government and writing investigative stories in a similar vein to those produced by Zimlive in early 2020. DM