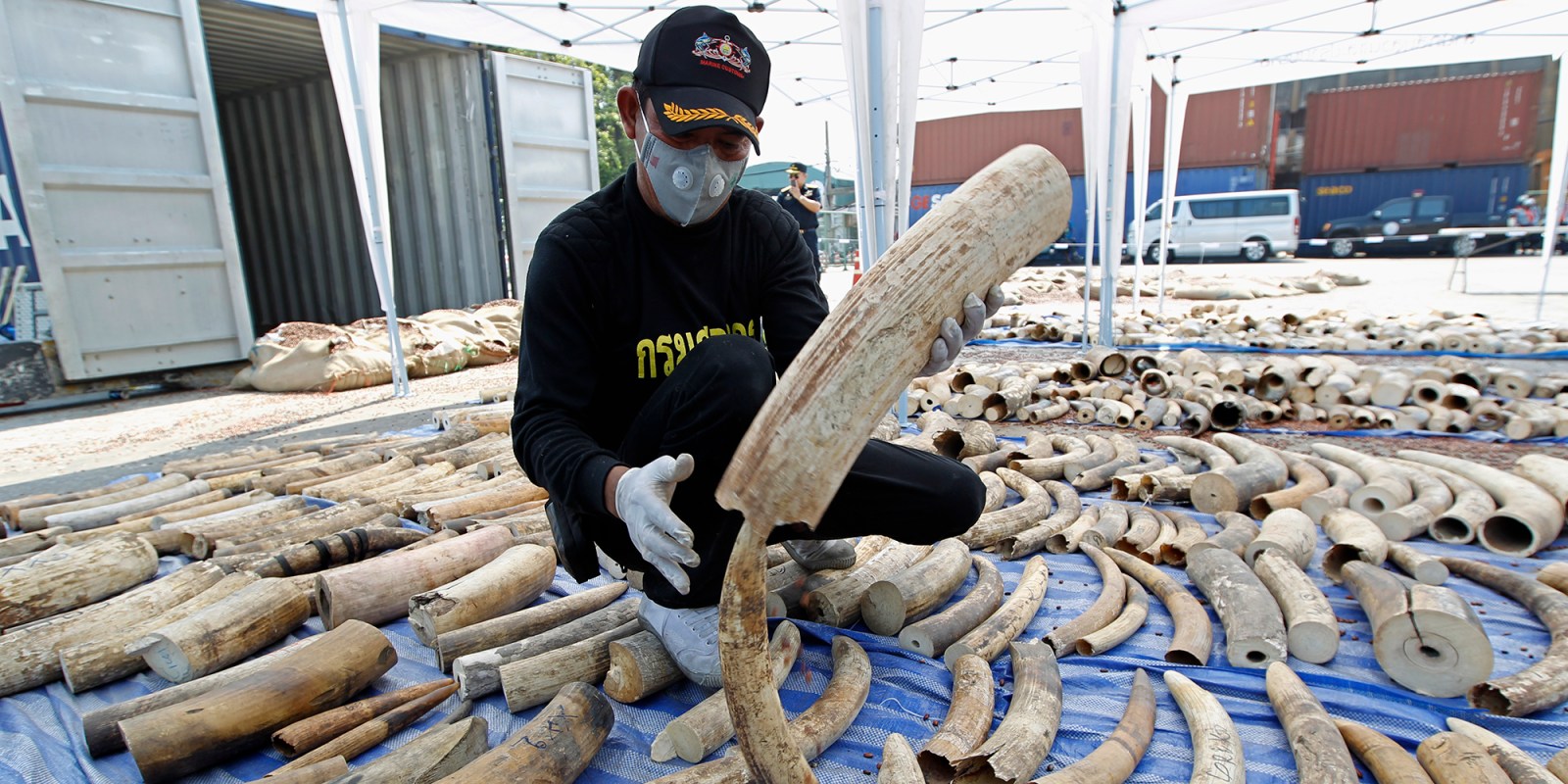 We have to stop what we’re doing and find a new path to sustainability for people, wildlife and the planet. But this is far from simple. And any attempt will be doomed unless we can find a lasting way to deal with corruption and criminality.

“Certainly, even if we aren’t today thinking much about the global implications of poaching in Africa, I can guarantee that we will be if it goes unabated. How shockingly destructive and historically shameful it would be if we did nothing while a great species was criminally slaughtered into extinction. And yet, here we are in the midst of one of the most tragic and outrageous assaults on our shared inheritance that I’ve seen in my lifetime – where an elephant’s dead ivory is prized over its living condition, where corruption feeds on its body and soul, and where money only makes matters worse.” – John Kerry

These powerful words were part of US Senator John Kerry’s statement in 2012 at the Senate Foreign Relations Committee hearing on “Ivory and Insecurity: The global implications of poaching in Africa”. In that year, the enormity of South Africa’s rhino poaching crisis was sinking in. About 850 were killed in 2012, and by 2020 almost 10,000 had gone. The loss of elephants was even harder to comprehend; in the three years to 2014, the illicit ivory trade accounted for 100,000 of these magnificent beasts. And during 2011 alone, roughly one of every 12 African elephants was killed by a poacher.

Yes, wildlife trafficking is indeed a brutal, cruel industry controlled by very powerful international crime syndicates. It is ugly, ruthless, totally indifferent to suffering, and all but unstoppable, with the real big men behind the smuggling remaining anonymous and seemingly beyond the reach of law enforcement authorities.

And in this dark, secretive world, wildlife is but one commodity among many, just another product line along with arms dealing, human trafficking and drugs, all made easier by the clinging miasma of corruption that mantles all of Africa. Corruption is a global problem, of course, but here it is different. Different because its tendrils tightly weave themselves into the entire fabric of government and civil society.

Therefore, it comes as no surprise that Transparency International ranks sub-Saharan Africa as the most corrupt region in the world – these 46 countries average a mere 32 out of 100 in the Corruption Perceptions Index (CPI). Six of them languish in the bottom 10 most corrupt countries in the world. The social and economic impact of these sad statistics is huge. While about 41% of Africa’s people continue to live on a mere $1.90 a day, illicit wealth to the tune of more than $89-billion finds its way into overseas bank accounts every year. Funds that could have been used to build hospitals and schools, improve infrastructure and create jobs.

The situation is made even more dire because many countries that score the highest on the CPI play a significant role in facilitating clandestine, criminal activities in Africa. How so? Well, nearly half of world exports come from these rich, industrialised countries whose financial institutions – many, but not all – foster corruption merely by failing to punish foreign bribery. In other words, corruption is everywhere, even in the “cleanest” of countries.

Porous borders, widespread poverty, bribable bureaucracies that embrace everyone from presidents to paupers, international financial institutions that turn a blind eye to money laundering, eager buyers everywhere but especially in Asia… it’s a match made in heaven for the criminal syndicates.

It is so lucrative that many African countries have become killing fields where elephants and rhinos, in particular, continue to be massacred every day. The World Wildlife Crime Report for 2020 says that these two species alone could amount to almost $1-billion a year.

While the total size of the global illegal wildlife trade is by its very nature hard to assess accurately, unlawful trafficking of wild creatures and their body parts, as well as plants, ranges anywhere from $5-billion to beyond $20-billion a year.

However, these estimates fade almost to insignificance when you read the World Bank’s 2019 assessment of illegal logging and fishing. This august body calculated the real cost to the global economy of these activities to be within a staggering range of between $1-trillion and $2-trillion a year.

… we have to stop what we’re doing and find a new path to sustainability for people, wildlife and the planet. But the doing of it is far from simple. And any attempt will be doomed unless we can find a lasting way to deal with corruption and criminality. It is at the core of everything.

With all this focus on the illegal wildlife trade, what of the legal trade? Is there such a thing? Indeed, there is. The market for exotic animals and plants is not a new one – wildlife has been traded freely and without sanction or restriction throughout the ages. Even now, in terms of international law, millions of animals and plants across thousands and thousands of species are legitimately captured and “cropped” from the wild every year and sold on as pets, food, medicine, timber, garden plants, tourist tat, and many other guises.

Estimates of the size of the legal trade vary widely, but one reliable source puts the yearly turnover in the region of $300-billion. But that was way back in 2005 – inflation alone would indicate a substantially higher figure today.

Many would argue that even this legal trade is unsustainable. WWF acknowledges this but then says, “wildlife trade is by no means always a problem and most wildlife trade is legal”. The organisation then admits that the legal wildlife trade, too, “has the potential to be very damaging. Populations of species on Earth declined by an average of 40% between 1970 and 2000 – and the second-biggest direct threat to species survival, after habitat destruction, is wildlife trade.”

As Traffic rightly says, “wildlife trade is an issue at the heart of the tension between biodiversity conservation and human development. Whether for medicine, construction, food or culture, a huge proportion of our trade, economy and way of life is entirely reliant upon wildlife products.”

With great diligence, the Traffic document goes on to outline strategies that would “increase pathways for responsible trade”. It is very hard to see how we can even entertain such worthy aims when the whole darn thing – illegal and legal – is clearly an unmitigated mess.

In July 2020, the Intergovernmental Science-Policy Platform on Biodiversity and Ecosystem Services reviewed the scientific evidence on the origin, emergence and impact of the novel coronavirus disease and other pandemics. The report emanating from this virtual conference revealed that the international legal wildlife trade had increased 500% in value since 2005 and 2,000% since the 1980s.

Given the insufficient and inadequate regulation, the globalisation of trade routes, lack of sufficient reporting and the links between poverty and illegal hunting, even the legal trade will become unsustainable in the future, the report warned. “This information, case study data and analysis of trends suggest that the legal wildlife trade is, in many cases, unsustainable and a continuing threat to biodiversity conservation,” it said. An understatement if ever I saw one.

It all seems to paint a very bleak and depressing picture as it is so hard to see a way out. The answer is simple: we have to stop what we’re doing and find a new path to sustainability for people, wildlife and the planet. But the doing of it is far from simple. And any attempt will be doomed unless we can find a lasting way to deal with corruption and criminality. It is at the core of everything.

That said, we have to take our victories where we find them. I couldn’t help but punch the air when I read that the notorious (alleged) poaching kingpin Mansur Mohamed Surur had been extradited from Kenya to the US. There, he will face charges of conspiracy to “smuggle at least 190kg of rhinoceros horns and at least 10 tons of elephant ivory valued at more than $7-million”.

And I could not suppress a little jig of glee when suspected smuggler Chen Wong Sen’s cellphone data were analysed. Armed with this information,  investigators traced Bach Van Hoa, an active member of the Hydra syndicate that smuggles elephant ivory, rhino horn and tiger parts to Chinese and Vietnamese dealers. OBP/DM

Peter Borchert’s media and publishing career spans about 45 years. As the founder and publisher of Africa Geographic magazine, he is perhaps the most awarded wildlife and conservation journalist out of Africa, winning more than 100 local and international conservation and media awards. He has authored five natural history books and has published and edited in excess of 500 magazines and books. He is the honorary chairperson and editor-in-chief of the Shannon Elizabeth Foundation which publishes www.rhinoreview.org where this article first appeared. He is also co-host of South Africa’s number one-rated nature podcast, www.artofconservation.com