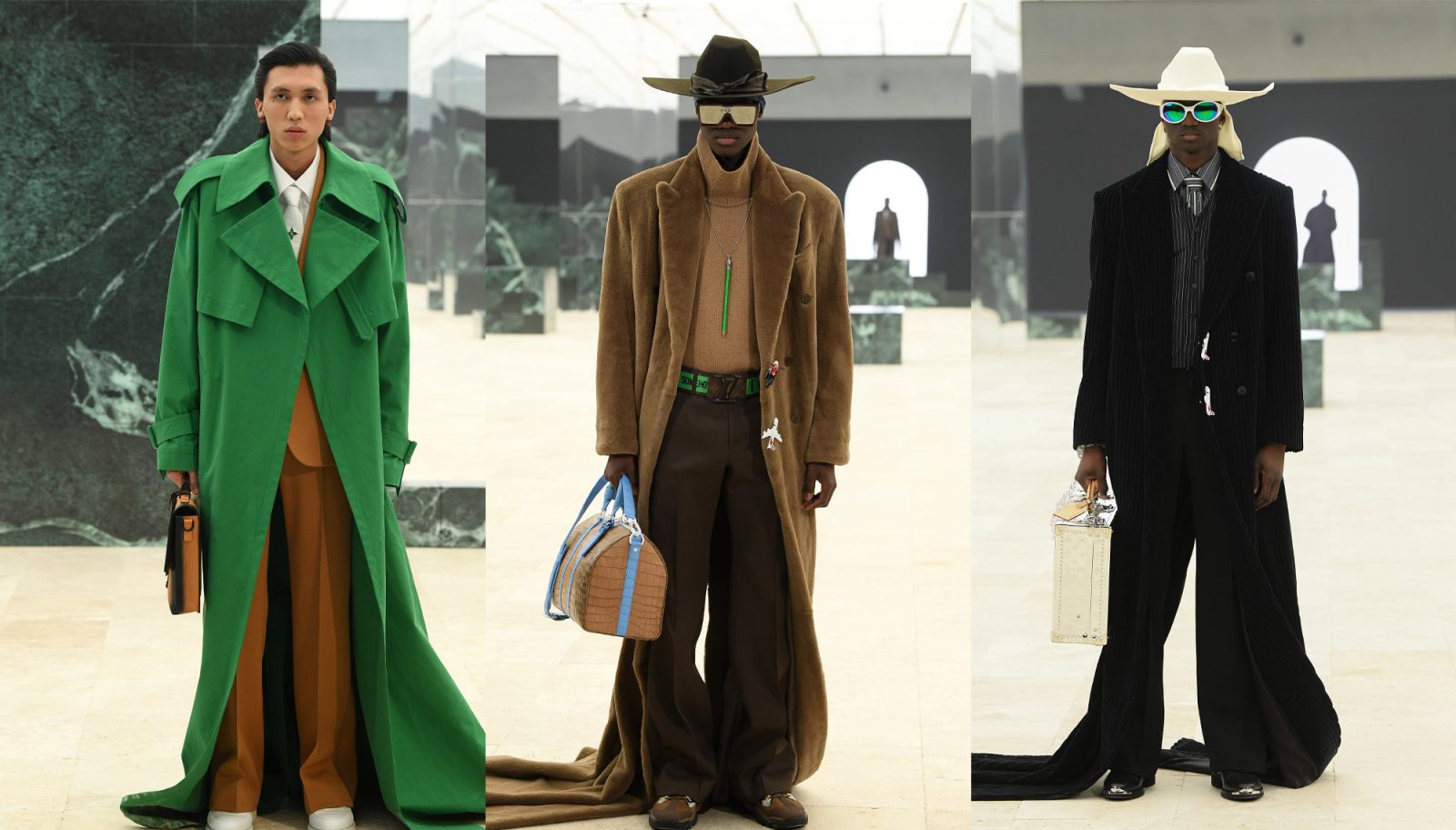 Models walk the runway during the Louis Vuitton Menswear Fall/Winter 2021-2022 show as part of Paris Fashion Week on January 20, 2021 in Paris, France. (Photo by Pascal Le Segretain/Getty Images for ABA)

From the US Presidential inauguration to Virgil Abloh’s men’s autumn/ winter 2021 collection, the long to floor-length coat is making a firm return. In times of pandemic, and ahead of the winter months, it might just be the kind of garment we need right now.

“Today is the day. After a disturbing era of chaos and division, we are entering the next chapter of American leadership with the inauguration of Joe Biden and Kamala Harris. Right now, I’m feeling more than just relief at putting the past four years behind us. I’m genuinely hopeful for what’s to come,” said Michelle Obama on the morning of 20 January 2021.

Later that day, she walked down the Capitol’s red-carpeted stairs, her gloved hand firmly into her husband’s; for a fleeting moment, her gaze was slightly down, as if not to fall. It wasn’t hesitant, or because of an unbalance; rather a habit, the natural thing to do when we pay attention to where we’re going. After all, how could she fall when, in fact, she was about to fly?

And about to fly she was, or so it seemed. Ahead of President Joe Biden and Vice President Kamala Harris being sworn in on the Capitol’s West Front, former first lady Michelle Obama entered the place dressed head-to-toe in burgundy, a shade – like purple – that was meant to bridge “the divide by bringing both colours (red and blue, the colours of the Republican and Democratic party) together”, say Vanessa Friedman and Jennifer Steinhauer in The New York Times.

But beyond the monochromic tone of her outfit and colour that carried a subtle message of hope, it was the coat – designed by Sergio Hudson, a designer from South Carolina – that grabbed the eye, and the mind.

“We did the pants instead of a dress, and we did the top as a sweater instead of a dress. And, it’s pretty much the exact same look and we dropped the coat to the floor just for a little bit more drama, and that’s how we got where we got,” Hudson told Marie Claire’s Neha Prakash in a recent interview.

The coat in question, tailored, with lapels and epaulettes, single-breasted, fell to the floor; it wasn’t just reminiscent of the superhero cape; it had a presence and life of its own: it lifted slightly with her every step and glided over the invisible winter breeze; it had grace and majesty; it spoke about someone in command, someone here to tell us: “I’m genuinely hopeful for what’s to come.” Could it be that the coat was here to wrap us all under its warm promise of better days to come?

Michelle Obama wasn’t the only one whose long (long) coat attracted attention while signifying a change in times. There were many women who came with a subtle tail behind, a tweaked cape, tucked in slightly and wrapped in formality —modern and tailored superheroes but superheroes nonetheless.

At a time of substantial pain and confusion, of social upheaval and loss, there is magic in seeing a simple garment proclaim and signify. Fashion has always been a marker of the times, a telling of sort, even a sartorial rebellion against what seemed broken, rigid and insurmountable – from Christian Dior’s New Look in 1947, “featuring rounded shoulders, a cinched waist, a very full skirt… celebrated ultra-femininity and opulence in women’s fashion. After years of military and civilian uniforms, sartorial restrictions and shortages, Dior offered not merely a new look, but a new outlook,” said the Metropolitan Museum of Modern Art on Yves Saint Laurent’s Mondrian collection that seemed to echo a generation’s modernist état d’être – way of being, or neon-bright, colourful styles brought by Dancehall throughout the 80s, fashion has often given us statements of hope and belief in the future.

Back to the Presidential inauguration, VP Kamala Harris arrived with an ankle-long purple coat designed by black designer Christopher John Rogers; at night, she changed into a tuxedo black overcoat by Hudson, once again, you guessed it, just hovering over the tiles.

Jennifer Lopez flew to the mic in a Chanel pantsuit ensemble, in suffragette white, her coat floating over the red carpet. Meanwhile, 22-year-old poet Amanda Gorman, whose poem The Hill We Climb filled the audience – and the world – with joy and optimism, wore a Prada yellow double-breasted coat, low on the ankle — the colour an ode to Jill Biden, the shape a shield, a light, the cape that would drape us all in her powerful words:

“When day comes we ask ourselves,
where can we find light in this never-ending shade?
The loss we carry,
a sea we must wade.
We’ve braved the belly of the beast,
We’ve learned that quiet isn’t always peace,
and the norms and notions
of what just is
isn’t always just-ice.
And yet the dawn is ours
before we knew it.
Somehow we do it.
Somehow we’ve weathered and witnessed
a nation that isn’t broken,
but simply unfinished…” she told us.

But the long coat didn’t stop there. A day later, at Louis Vuitton men’s wear autumn/ winter 2021 show, it popped up again, here in a bright bottle green, long enough to swipe the floor, a trompe-l’oeil of sorts: the superhero on the way to the office, his satchel in hand; there in all-white, at once commanding and beatific. Here, in black, the exaggerated tail of a tuxedo; there, in beige and fluffy, for a comforting superhero.

“The collection takes archetypes – the writer, the artist, the drifter, the salesman, the hotelier, the gallery owner, the architect, the student – and investigates the dress codes that inform our predetermined perceptions of these familiar characters,” says Vuitton in the lookbook.

Indeed, one needs to watch the film, done in collaboration with American conceptual artist Lawrence Weiner, the collection floats in an outburst of colours and movement, a movement rhythmed by Weiner’s text: “YOU CAN TELL A BOOK BY ITS COVER”, “THE SAME PLACE AT THE SAME TIME”.

Fashion and the garments we wear will never be enough to erase the pain and loss of the year that was. But it might help us, maybe, feel a little stronger, a little more hopeful. Long live the superhero coat. DM/ ML