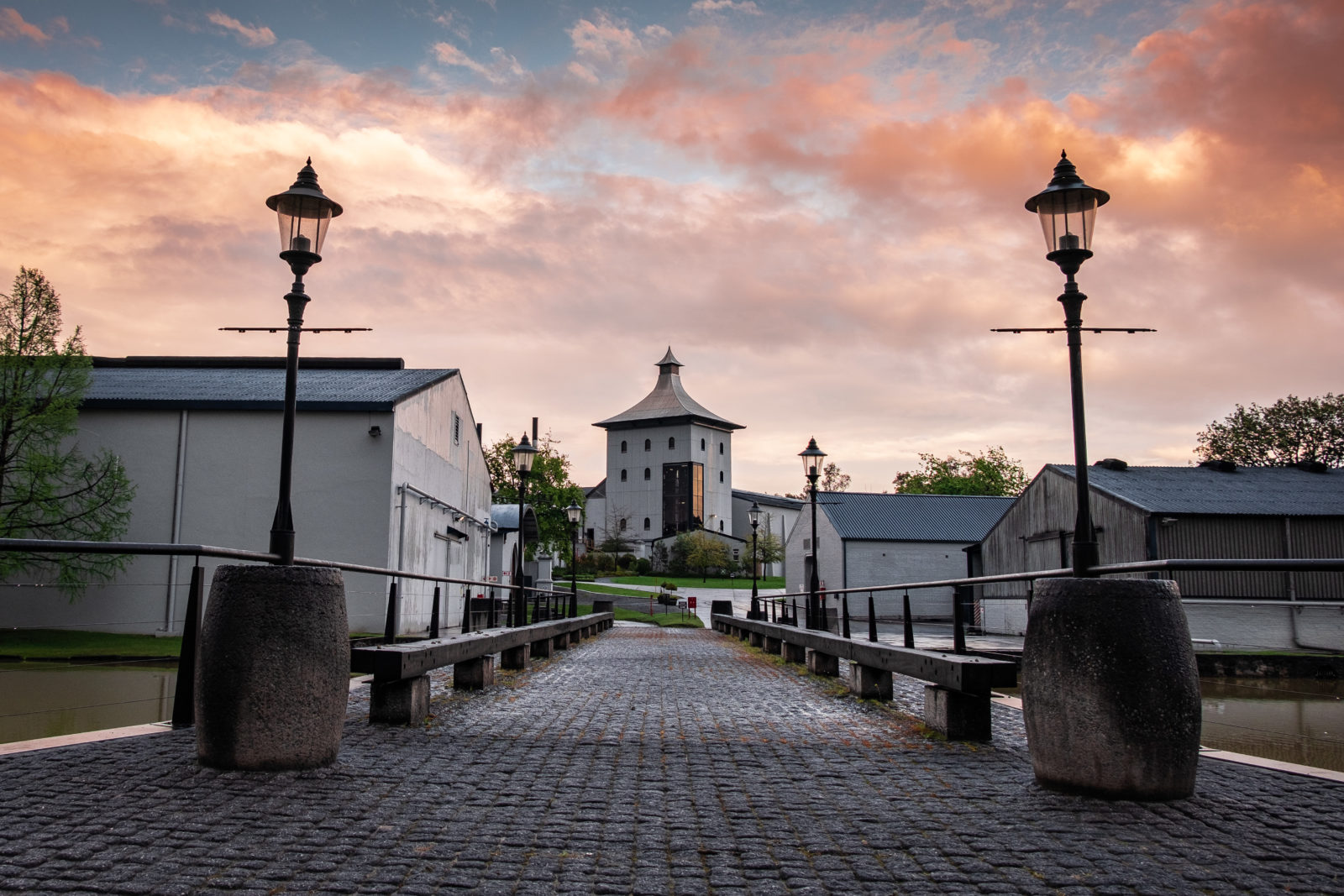 Bain’s Cape Mountain Whisky is made at the James Sedgwick Distillery in Wellington. (Photo: Supplied)

Say cheers to the story behind the Cape’s own brand of whisky.

Making whisky is not an overnight process. For master distiller Andy Watts it was a decade from idea to launch to create Bain’s Cape Mountain Whisky.

When they say something is an “acquired taste” it usually means you initially hate it. At this point, you have two choices: either you admit olives are Satan’s fruit and have no more truck with them, or you persevere until they eventually become palatable.

There’s a third option, but it’s extreme: get pregnant. It can change everything; I loathed avocado until I was with child, and since then I’ve loved them – even decades after giving birth.

Giving up or soldiering on is not a hard and fast rule. Sometimes it’s simply yuck and will always be yuck. Like kale. When I first began drinking whisky, it was in a tall glass with lots of ice and about a 1:20 ratio to water. I was determined and diligent and progressed swiftly. Now I can sip on a bold peaty single malt with a couple of blocks of ice and the merest splash of water, preferably in a nice heavy cut glass tumbler – and genuinely enjoy it. Adding a mixer was a step I bypassed for some reason. Maybe I’m just a competitive over-achiever.

Andy Watts, founder distiller (and the only master distiller in Africa) of Bain’s Cape Mountain Whisky, which is produced at James Sedgwick Distillery in Wellington, says there is no right or wrong way to drink whisky. “Whisky is no different from any other spirit; it can be mixed. Whether you fancy it with Appletiser or Pepsi Max, you enjoy it – as long as it’s responsibly,” he commented during his media presentation at the distillery. Lovely guy. I suspect he hasn’t come across anyone who mixes their whisky with crème soda.

The brightly coloured cool drink is relevant to my thought process because the reason I was out in Wellington in the first place was to learn more about the distillery’s green sustainability initiatives, commemorated with a limited edition release of Bain’s with green labels at the end of 2020. These initiatives have seen it named Green Company of the Year award hosted by the BIG Awards for Business towards the end of 2019, and the title of Sustainable Distillery of the Year at the 2020 Icons of Whisky Awards held annually by Whisky Magazine in London, in which it beat competition from all producers across the globe from Scotland and America to Ireland and Australia.

Here are the technical facts which were provided.

During fermentation, the by-product CO2 is produced naturally. This is captured, purified and sent for use in bottling sites. Not releasing it into the atmosphere minimises the greenhouse gas footprint.

Malt and maize are mashed and fermented to produce alcohol for distillation. The effluent by-product from distillation is sent to the liquids/solids separator from which the solids are collected as spent grains which are highly nutritious animal feed, and would otherwise be disposed of in the environment.

Liquid effluent is further fed into the anaerobic reactor which has organisms that reduce the Chemical Oxygen Demanding organic compounds by more than 90%. This reduces the load on the municipality and has the added benefit of saving money for the distillery.

During anaerobic digestion in the reactor, the by-product produced is methane gas with high calorific value, which is then fed into the gas boiler which in turn produces steam used in the distilling process. Again, there is a cost benefit by reducing the use of coal, as well as reducing coal boiler emissions.

Effluent from the reactor is further fed into the RO plant which purifies the water which is then recycled back into the process – not the part we drink, fret not. Benefits include the reduction of fresh water consumption, as well as effluent water sent to the municipality to deal with.

In addition, brand manager Rowan Ellappen said: “We have partnered with Greenpop and have committed to plant a tree for every case of green-labelled Bain’s sold. We’ve actually had requests from groups to buy the entire allocation but decided to rather service the country. Most of our stock is out of our distribution centres and with retailers already; we produced stock for three months but ran out in six weeks. We’ve seen a fantastic response.

“Stock at store level should be done by the end of January 2021. Thereafter we should be planting 5,000 trees in early February 2021 at the Modderfontein Reserve in Johannesburg.”

All well and good, but what’s so special about Bain’s Cape Mountain Whisky anyway? Among its many accolades, it’s been awarded twice as the World’s Best Grain Whisky, and there’s the clue: grain whisky, specifically South African yellow maize.

There are three types of whisky in the world: malt, blended and grain. Malt and grain combined is blended whisky, which accounts for about 90% of all whiskies. Way back in 1999, Watts got to thinking…

“I looked at the South African whisky scene. Who were the main players? There were two brands both beginning with J – Jack Daniel’s from the US and Jameson’s from Ireland. Jameson’s is still very popular, while Jack has declined a little bit.

“What made them so popular besides massive marketing budgets? They could take over any bar they wanted to, decorate in theme, and money was no object. But what made the consumer want to go back and drink it a second time?” pondered Watts.

“If I look at Irish whiskeys, to me they are smooth, soft and very easy to drink. But from a technical side they are a little bit bland. Irish whiskey is inoffensive and lends itself to being consumed. American bourbon style, what about this? It’s sweet and spicy with lots of vanilla notes coming through.

“So I looked at the two and thought, wouldn’t it be great if I could make something that took the best of both worlds and be somewhere in the middle? Smooth, soft and easy to drink and at the same time, with a sweet and spicy character; something different to what was in the market.”

There’s a good reason why it took a decade from Watts’s musings in 1999 and the launch of Bain’s in 2009. Whisky does not happen overnight. First of all, the rules say it must go into barrels for a minimum of three years before it can even be called whisky. And if you’re wondering whether it’s “whisky” or “whiskey” – the former is the Scottish and Canadian (and South African) way; the latter is the Irish and American.

In the 1990s, said Watts, we were welcomed back into the global fold and whiskies which had avoided South Africa began to return, post-Apartheid. “Suddenly there was a new – and bigger – consumer base, and a broader demographic; a lot of women for example. There’s always been the perception whisky is a masculine drink, which couldn’t be further from the truth. It’s inclusive for anyone who wants to drink it,” said Watts.

Smooth and soft is actually quite difficult when you’re talking malt whisky, which has lots of flavour and character, and lots of talking points, said Watts. “I didn’t think that would be the right base for my idea. So what I did was the very unusual, definitely not sexy, point of view that was to try grain whisky. This was already a big step in a new direction.”

Because whisky is a natural product – water, grain, yeast – and the addition of flavourants and sugar is forbidden, everything lies in the barrels. The type of wood, the age of the wood, and whether it’s been used for other purposes before, all come into play. With the yellow maize bringing its sweetness to the blank canvas, Watts conducted a deconstructed tasting which fast forwarded through the 10 year + process in less than an hour.

It’s important to note tasting and drinking are different. For drinking you can mix, dilute, and chill to your heart’s content. For tasting, you begin with only the whisky in the glass, followed by a teeny splash of water to open it up.

Watts likes to use the artist analogy: “To paint a masterpiece, the artist needs a good canvas. Then with their colours, they can paint their painting – whether it’s a dark stormy evening or bright beautiful blue sky. Whisky is no different. A blended whisky would normally be 30% malt, 70% grain. To me grain is vitally important. If that grain/canvas is no good, the blend won’t be either.”

After the requisite first three years in cask, during which the whisky had softened, smoothed and picked up some of the American oakiness, Watts was not satisfied. He put it all into barrels which had been used once previously, for bourbon. For another three years. “I was hoping here would be my eureka moment. It was nice but nice doesn’t cut it,” he said.

“We took the incredibly unusual, very expensive decision, of instead of pouring this whisky into a bottle, we bought a second set of same casks, and put it in there for another two years. To leave it in the same cask was not going to improve it, as it extracts less of the wood over time.”

This gave the whisky another opportunity to extract those amazing flavours. The climate in Wellington – hot, very hot – plays its part as it accelerates maturation, with a four and a half to five percent loss in the “Angels’ Share” – the amount of the spirit lost via evaporation. In Scotland, it’s around two percent. This doesn’t bypass the legislation of the minimum time required in barrels, but it does have an effect on the end product.

Watts finally had his eureka moment with the whisky with the warm mouth feel which achieved the spiciness and sweetness he was after. “It had mellowed down a bit, and become velvety smooth. It slides down your throat,” he said.

Whisky making is a lifetime of passion, said Watts, who has been in the industry for 36 years – 29 of them at James Sedgwick Distillery, which has had but eight managers in its 134-year history. “If you’re not in it for the long run, find another job,” he quipped.

Bain’s Cape Mountain Whisky is named after Andrew Geddes Bain (a Scotsman as it happens), the geologist responsible for Bainskloof Pass (among others around South Africa) which was the first road to connect Wellington more directly to Ceres and Worcester. It was constructed with convict labour between 1849 and 1853, less time than it takes to make the whisky. The 28km pass, initially built for horse-drawn traffic, is a spectacular and terrifying drive, with its ravines and sheer drops. I’ve done it once, so I can cross that off the list, and pour another drink. DM/TGIFood