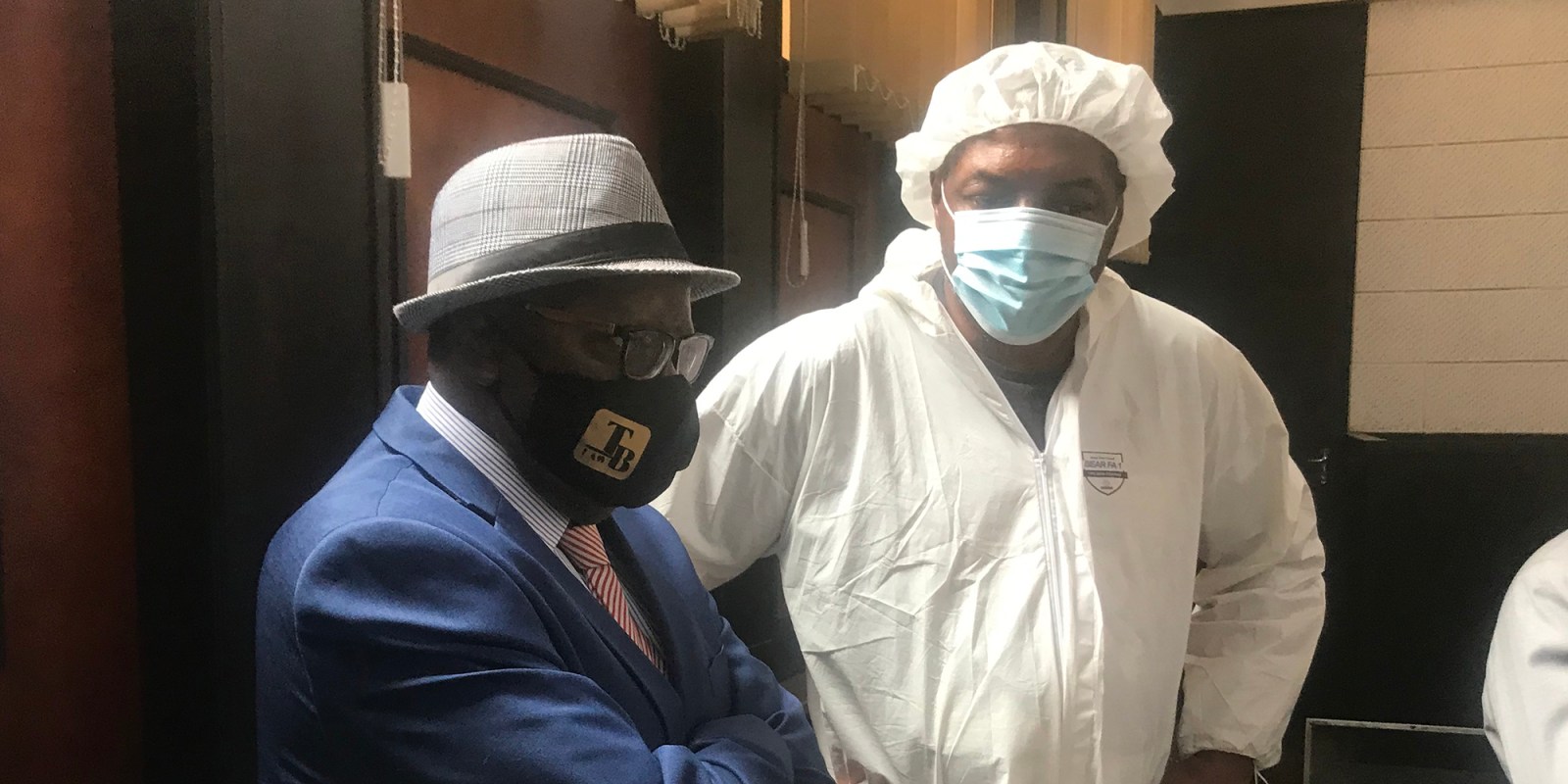 From left, former Zimbabwean finance minister Tendai Biti with journalist Hopewell Chin’ono, 48, in the Harare Magistrates’ Court on 12 January 2020. Chin’ono has been jailed three times over the past six months. (Photo: Frank Chikowore)

A Zimbabwean court has refused to drop charges against a leading opposition official despite the section of the law used by the prosecution having been expunged by the country’s highest court.

The prosecution has also charged prominent journalist and documentary filmmaker Hopewell Chin’ono, who was arrested last Friday for the third time in six months (Zimbabwean journalist released on bail after 6 weeks in jail), and the opposition party’s spokesperson, Fadzayi Mahere, with communicating or publishing falsehoods. Like Sikhala, Mahere was also alternatively charged with incitement.

Harare magistrate Ngoni Nduna ruled that Sikhala should face trial for violating a section of the country’s Criminal Law Codification and Reforms Act – but the relevant section was struck off the statutes by Zimbabwe’s Constitutional Court in 2014.

In his ruling, Nduna said the outlawed section had been revived through changes that were made after Zimbabweans adopted a new Constitution in March 2013.

“The defence team was correct to say that Section 31 (a) (iii) was struck off the country’s statutes. The judiciary can only strike off a law but cannot create any other law. In this case, provisions of the [struck-off law] were revived by Amendment 3 of 2016; therefore the accused person is duly placed on remand,” ruled the magistrate.

The decision drew criticism from the defence lawyers, who told reporters that it was impossible to revive a non-existent law.

The same law was being challenged by Chin’ono and Mahere, with the court rulings expected on Wednesday and Friday respectively.

Meanwhile, Chin’ono, who was ordered by the court to be in self-isolation in prison after he told the court that he had had contact with two people who tested positive for the coronavirus in South Africa, complained that he was transported to court in a truck full of other inmates.

This was despite the court making two orders compelling the correctional services department to ensure that Chin’ono followed the Covid-19 containment measures.

The veteran journalist’s lead defence attorney, Harrison Nkomo, said the actions of the correctional services department exposed inmates to Covid-19, and magistrate Lanzini Ncube called the officer in charge of the department, Garikai Mudukuti, to the stand where he warned him against failing to comply with court orders.

Nkomo also complained that Chin’ono was being brought to court in leg irons and handcuffs, prompting the magistrate to warn the Zimbabwe Prisons and Correctional Services to stop exposing the documentary filmmaker to “inhuman and degrading treatment”.

Trouble for Sikhala, Mahere and Chin’ono started after they allegedly used their Facebook and Twitter accounts to comment on a video about a Zimbabwean police officer who allegedly beat to death a nine-month-old baby while enforcing Covid-19 lockdown restrictions imposed by Mnangagwa’s government.

However, the national spokesperson for the Zimbabwe Republic Police, Assistant Commissioner Paul Nyathi, issued a statement last week saying the baby was alive and had never been assaulted. DM