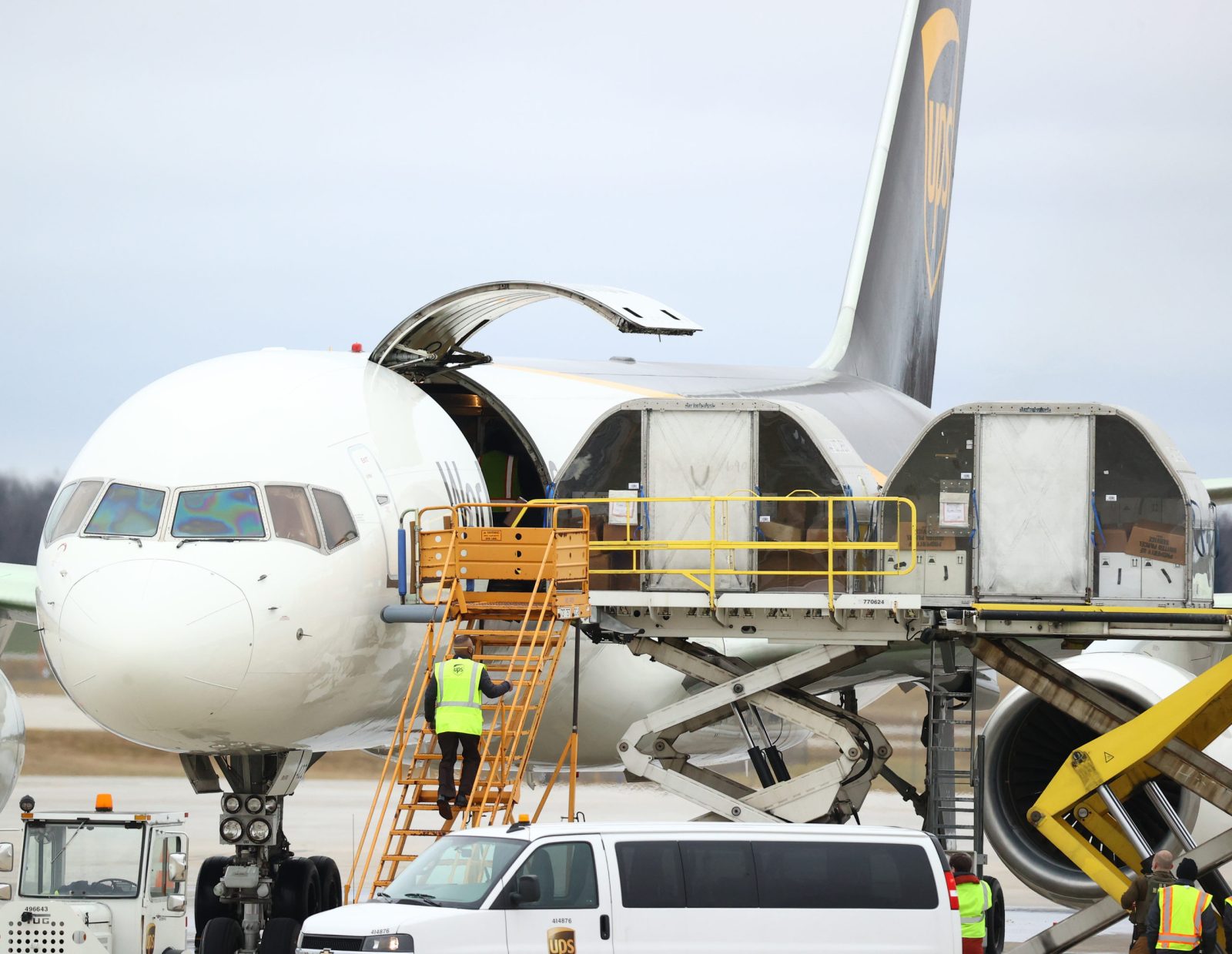 Shipments of the Pfizer-BioNTech COVID-19 vaccine are loaded into a UPS plane on December 13, 2020 in Lansing, Michigan. (Photo by Rey Del Rio/Getty Images)

The first doses of Pfizer-BioNTech’s vaccine - reported to be about three million - have been shipped to a number of states, where frontline workers are ready to receive the first jabs.

Head of Operation Warp Speed, General Gustav Perna, said at the weekend: “Expect 145 sites across the states to receive the vaccine on Monday, another 425 sites on Tuesday and the final 66 sites on Wednesday.”

During a virtual media conference on Saturday, 12 December, the US Food and Drug Administration(FDA) announced the authorisation for emergency use of the Pfizer-BioNTech vaccine.

.@FDACBER Director Dr. Peter Marks: “Although this is not an FDA approval, this authorization makes Pfizer-BioNTech’s vaccine available in the United States and holds the promise to alter the course of this pandemic.” pic.twitter.com/jcK8zoDGw2

“This is the first Covid-19 vaccine to be authorised in the United States. We applied our high standards of review… so that Americans can have trust and confidence that the vaccine meets FDA’s rigorous standards for safety and effectiveness – and with this authorisation we know that our federal partners are already moving to distribute the first doses of the vaccine throughout the country.”

Hahn also reminded the American public that while the vaccine is available, it will not reach everyone instantly and that people still needed to be vigilant and take all necessary precautions: “… inoculation will take time, wear a mask, wash your hands and remain socially distant when possible.”

Doctors in rural areas of the US say they are fighting distrust of the vaccine and many are planning to take the first shot themselves, where many people can see them taking it. A doctor and senior executive at an Indiana hospital says it will be done “on camera in a very public way to help people feel comfortable with the vaccine”.

Dr Thomas Huth said that besides urgently vaccinating medical staff and doctors “who are at the highest risk… we want the nursing home staff to get vaccinated early because that’s where the majority of our very sickest patients come from”.

US President Donald Trump seemed not too concerned with the vaccine rollout, instead on Sunday he had a new reason for not getting behind the annual defence policy bill – the budget for the military, including expenses and salaries. He tweeted: “THE BIGGEST WINNER OF OUR NEW DEFENSE BILL IS CHINA!. I WILL VETO!”

There does not appear to be any more clarity on exactly how or what China is supposed to be gaining from the bill.

THE BIGGEST WINNER OF OUR NEW DEFENSE BILL IS CHINA!. I WILL VETO!

Trump has always been pro military, so it is unclear what he is trying to achieve by not signing the bill – unless this is part of a personal policy of obstructionism on his part and an attempt to make as big a mess as he can on his way out. (The new Congress convenes on 3 January and will be able to craft a new bill to send to the new president on January 21 if Trump does not change his current position.)

The bill was sent to the president on Friday, and both Republican and Democratic lawmakers have been reported as saying the bill is tough on China. Senate majority leader Mitch Mcconell has disagreed with the president, urging that the bill be passed and saying it would “keep our forces ready to deter China and stand strong in the Indo-Pacific”.

Meanwhile, Trump supporters and counter-supporters clashed in Washington DC on Saturday, where six people were arrested for assault, among about 23 people arrested overall. Four people were stabbed and reported to be in critical condition. One man, a counter-protester, was shot in Olympia, Washington State.

Chanting “Four more years”, Trump supporters took to the streets of Washington, among them the notorious “men’s club”, the Proud Boys, who took centre stage at skirmishes that broke out with counter-protesters. Reporter Shauna Sowersby recorded some footage of the Proud Boys, which she tweeted, saying “… smoke bombs and what appeared to be an improvised explosive were hurled by Trump supporters and Proud Boys”.

Some Trump supporters, Proud Boys and counter protestors faced off in a street brawl in front of the Capitol. Paintballs, smoke bombs and what appeared to be an improvised explosive were hurled by Trump supporters and Proud Boys into the crowd. #OlympiaProtests pic.twitter.com/lssBWppU1d

She also tweeted that it appeared that a member of the Proud Boys had shot a counter-protester. DM

"Information pertaining to Covid-19, vaccines, how to control the spread of the virus and potential treatments is ever-changing. Under the South African Disaster Management Act Regulation 11(5)(c) it is prohibited to publish information through any medium with the intention to deceive people on government measures to address COVID-19. We are therefore disabling the comment section on this article in order to protect both the commenting member and ourselves from potential liability. Should you have additional information that you think we should know, please email [email protected]erick.co.za"