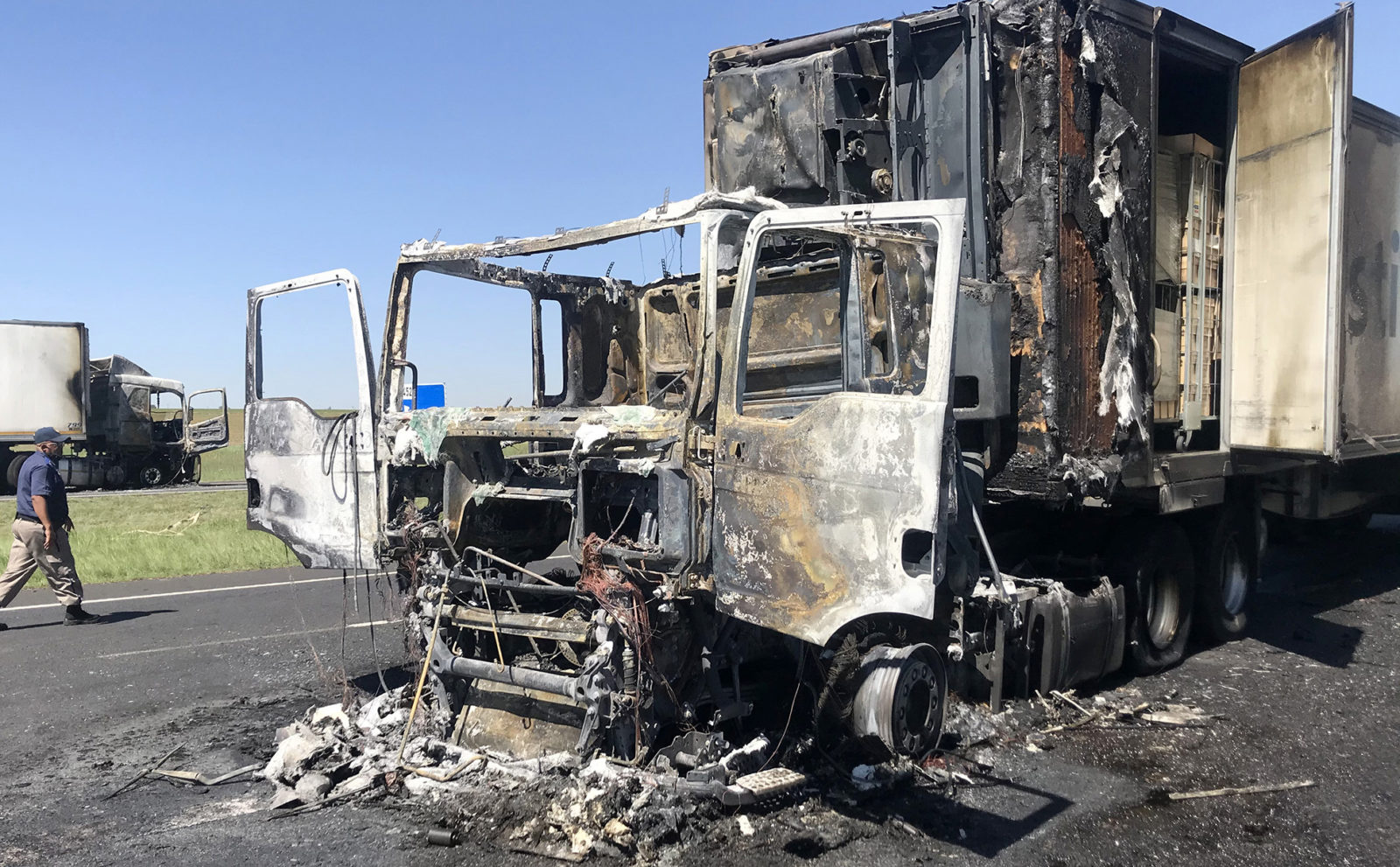 Two trucks that were set alight in the early morning on the N12 near Daveyton in Ekurhuleni, 25 November 2020. Picture: Neil McCartney/The Citizen

Attacks on trucks continued this week with three set alight around Heidelberg, Gauteng, overnight on Thursday.

Edward Muchatuta says most truck drivers don’t stop anymore when a car tries to cut them off; rather ram the car and keep your life. His truck was stationary on the R23 in Benoni, Gauteng, when a group of armed men wearing balaclavas suddenly tried to open the driver’s door in July 2020.

Speaking in isiZulu, they told him to sit in the passenger seat. Muchatuta escaped through the passenger door. He thought the men planned to loot his truck but he watched from afar as they set it alight and then fled. Muchatuta said it took hours for the police to arrive despite the nearest SAPS station being only about 15km away.

Attacks on trucks continued this week with three set alight around Heidelberg, Gauteng, overnight on Thursday, according to Patrick O’Leary, editor of industry publication Fleetwatch.

An inter-ministerial task team met stakeholders last week following the recent surge in attacks, with at least 84 incidents recorded between April and November 2020. The state has committed to expanding police resources in hotspots.

Muchatuta, the national co-ordinator of the Zimbabwean Exemption Permit Association, doubts the state’s “zero-tolerance” approach to “economic sabotage”, as explained by Labour Minister Thulas Nxesi, will make a difference.

Police Minister Bheki Cele has suggested the state might deploy the SANDF to help police curb the attacks. The attacks appear to be closely linked to calls from the All Truck Drivers Foundation (ATDF) for the state to ban foreign drivers and force employers to hire locals.

Human Rights Watch (HRW) released an investigation in 2019 that included interviews with victims who said the authorities were failing to act. “Groups of people claiming to be South African truck drivers have thrown gasoline bombs at trucks and shot at, stoned, stabbed and harassed foreign truck drivers to force them out of the trucking industry,” read the report.

Cele recently announced that 25 people had been arrested in connection with the attacks and President Cyril Ramaphosa has condemned the lawlessness. SAPS has deployed extra personnel on the roads to prevent attacks.

Muchatuta remained doubtful about the state’s commitment to act, saying it appeared more concerned with cracking down on foreign drivers than stopping the violence. “Whatever they want to do, the government, it’s not about stopping attacks because if it was about stopping attacks they should have had that meeting with us and not the ATDF,” he said.

“The way they conduct their investigations, it will be you taken as a criminal.”

He said foreign drivers were often employed because they were more willing to do cross-border runs and had more experience than local drivers. Local drivers’ associations reject the claims and say qualified South Africans are unemployed while companies give jobs to foreigners.

Industry organisations have said members are largely complying with labour laws and have suggested the attacks likely have an ulterior motive.

Nxesi recently said there was a risk that the attacks could lead to retaliatory moves from neighbouring countries and Muchatuta suggested the state might only take the issue seriously if other SADC countries close their borders to South African trucks.

In a meeting with KwaZulu-Natal Premier Sihle Zikalala recently, the trucking sector committed to providing 400 jobs for locals. Driver associations such as the ATDF are submitting lists of candidates.

The provincial government said it would mount “an intensive operation” along the N2, N3 and N11 targeting foreign drivers without proper permits.

The attacks, however, have been targeted at local and foreign drivers. Busani Dlamini, 45, from Ixopo, KwaZulu-Natal, was shot dead last week in Alberton, Gauteng, when his truck was attacked.

“These attacks are not about the foreign driver issue. There seems to be a group of people operating in this area who are intent on incurring as much damage as possible to trucks – and who don’t care about whether or not the drivers of those trucks live or die,” O’Leary posted on Facebook.

The inter-ministerial task team said the labour issue was complicated by business issues such as ownership of trucks and competition for routes and tenders.

The Truckers Association of SA, which appears sympathetic to the ATDF’s calls but has condemned the violence and says its vehicles have also been targeted, recently called on the state to regulate the industry and prioritise emerging businesses, claiming the industry requires transformation.

Road Freight Association CEO Gavin Kelly said the sector had transformed significantly and was made up of far more companies than just large corporates.

“The call for ‘only certain transporters being permitted to operate on defined routes’ smacks of collusion, anti-competitiveness and the objective of capturing routes and markets. These transporters who want this just cannot fairly compete in the market and now want protection. At all costs. At any cost,” he said.

ATDF national secretary Sifiso Nyathi wants the state to institute a commission of inquiry into the ownership and labour practices in the sector. He has repeatedly denied that ATDF is behind the attacks.

Meetings between the government and stakeholders are ongoing.

The African Diaspora Forum is one of the parties attending the meeting, to which the ATDF had objected. “We do not need outsiders when we are discussing domestic issues,” said Nyathi. DM168