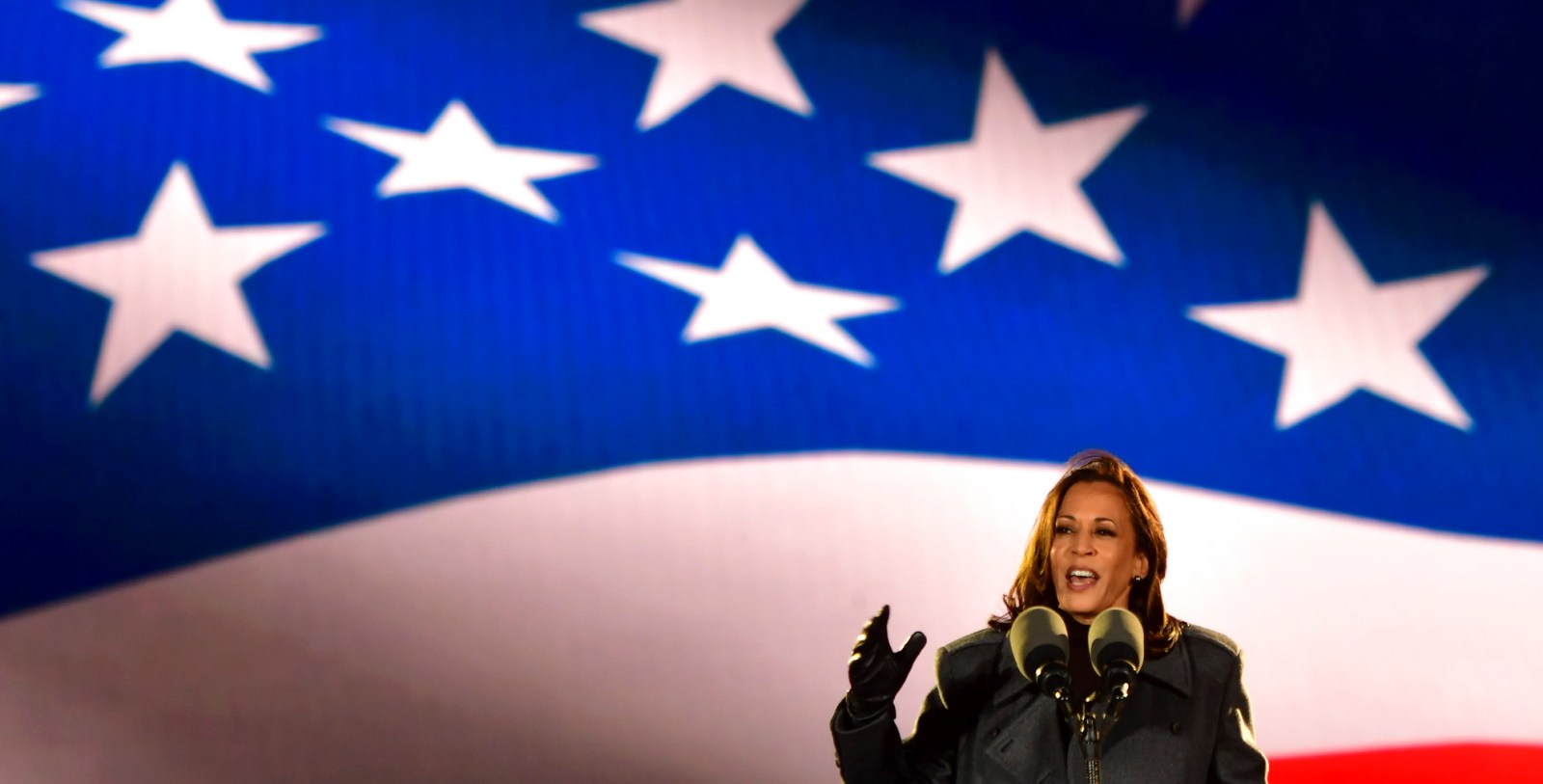 PHILADELPHIA, PA - NOVEMBER 02: Democratic vice presidential nominee Sen. Kamala Harris (D-CA) speaks at a drive-in election eve rally on November 2, 2020 in Philadelphia, Pennsylvania. Democratic presidential nominee Joe Biden, who is originally from Scranton, Pennsylvania, remains ahead of President Donald Trump by about six points, according to a recent polling average. With the election tomorrow, Trump held four rallies across Pennsylvania over the weekend, as he vies to recapture the Keystone State's vital 20 electoral votes. In 2016, he carried Pennsylvania by only 44,292 votes out of more than 6 million cast, less than a 1 percent differential, becoming the first Republican to claim victory here since 1988. (Photo by Mark Makela/Getty Images)

And with four being women of colour, it’s a big first for the White House – but also represents a powerful combination of professional and political clout

Vice-President-elect Kamala Harris said of Biden’s senior communications team announcement: “These communications professionals express our commitment to building a White House that reflects the very best of our nation.”

Of the seven-member top team four are women of colour.

The team represents a powerful combination of professional and political experience. All the women are tried and tested in various facets of the political communications arena and the majority have been part of the Obama administration and/or worked on the Obama-Biden campaign.

They include Kate Bedingfield, who will return to the White House as communications director. Bedingfield took to Twitter to say how proud she was to be chosen.

I’m unspeakably proud to have the opportunity to serve as White House Communications Director for @joebiden. Working for him as VP and on this campaign gave me insight into what kind of capable, compassionate, clear-eyed president he will be and it will be a profound honor to 1/

Bedingfield, originally from Georgia, has a deep White House history with Biden, having been his communications director when Biden was Barack Obama’s VP. She also worked as deputy director of media affairs for the Obama-Biden administration and knows her way around the political landscape, having worked on various senatorial campaigns in communications director and press secretary capacities.

Bedingfield, also on Twitter on Sunday night, commented on her fellow senior communications staff members, commending Symone Sanders as a “battle buddy” in the Biden-Harris campaign: “There’s no one I’m prouder to have been in the fight with.”

Symone Sanders, the youngest “senior” at 30 (she will be 31 on 10 December) is also potentially the most interesting. The “Rabid Feminist” and author tweeted that she was “ready to serve” and to “keep working in the PEOPLE’S HOUSE”.

Ready to serve accurately describes how I feel. Thank you Madam Vice President-elect @KamalaHarris for entrusting me with this charge. It has been the honor of my life to work for @JoeBiden & I am elated to have the opportunity to continue to that work in the PEOPLE’S HOUSE.

Sanders hails from Omaha, Nebraska. She joins the White House team as chief spokesperson for Vice-President-elect Kamala Harris. Sanders was a senior adviser on the Biden-Harris campaign and entered the political landscape as (the youngest yet at 25) presidential press secretary for Bernie Sanders’s presidential campaign in 2016. Before that she had been a political commentator after significant involvement in making young voices heard as a member of the Federal Advisory Committee on Juvenile Justice. Her book, No, you shut up – speaking truth to power and reclaiming America, was published in May 2020.

Born in Florida and raised in Guatemala, Pili Tobar moved back to the US in 2004 to attend the University of Miami. She has worked for the Democratic National Committee as national director of Hispanic media and has been an active force working for immigration reform as managing director of America’s Voice, an immigration reform advocacy group. Tobar also served as Hispanic media director for Senate Minority leader Charles E Schumer. She moves from being the Biden campaign’s communications director for coalitions to deputy White House communications director.

Biden-Harris transition spokesperson Jen Psaki takes the role of White House press secretary. Well suited to the role and no stranger to the intricacies of administration politics, Psaki was a spokesperson for Obama, serving as communications director for his last two years in office. She also served as deputy press secretary during his first term and as special assistant to the president. She left the White House in 2011 to join a public affairs firm in New York before returning as White House communications director for 2015-17.

Harris’s former chief of staff Karine Jean-Pierre too has a history with Biden beyond the campaign, rooted in their time in the Obama administration. The activist and author has served as a regional political director for the White House office of political affairs and now takes on the role of principal deputy press secretary. Out Magazine celebrated the announcement of Jean-Pierre as the first openly gay, senior White House staff member with an article entitled “Meet Karine Jean-Pierre, Biden’s Latest History-Making LGBTQ+Staffer”.

Jean-Pierre, who was born in Haiti and raised in New York, told Out Magazine: “As a Black, gay immigrant who comes from a working-class family, I know that America doesn’t work for everyone.” Her book, Moving Forward, is a memoir, but she says “it’s also a map – a map people can use to get involved in politics and their communities”. She is also an NBC and MSNBC political analyst and has a broad range of political professional experience, from covering grassroots activism to political campaigns.

The first lady will have Elizabeth E Alexander as her communications director. Alexander served as a senior adviser on the Biden-Harris campaign and has a legal and political background, she has a law degree and has also served as a prosecutor. She is well known to the Bidens, having been communications director to the then senator, going on to be Vice-President Biden’s press secretary at the start of the Obama-Biden administration. She has also worked as press secretary for the United Nations Foundation and was a senior managing at “global business adviser firm” FTI Consulting as a strategic communications and gender inclusion specialist.

Shortly after the announcement of Etienne’s new post, Pelosi said: “Vice-President-elect Kamala Harris has chosen a seasoned communicator in the selection of Ashley Etienne.”

(Also to be announced on Wednesday 2 December is the appointment of  Neera Tanden as director of the Office of Management and Budget. Tanden, a lawyer, political consultant and writer, will be the second woman and first Indian-American in that post.) DM