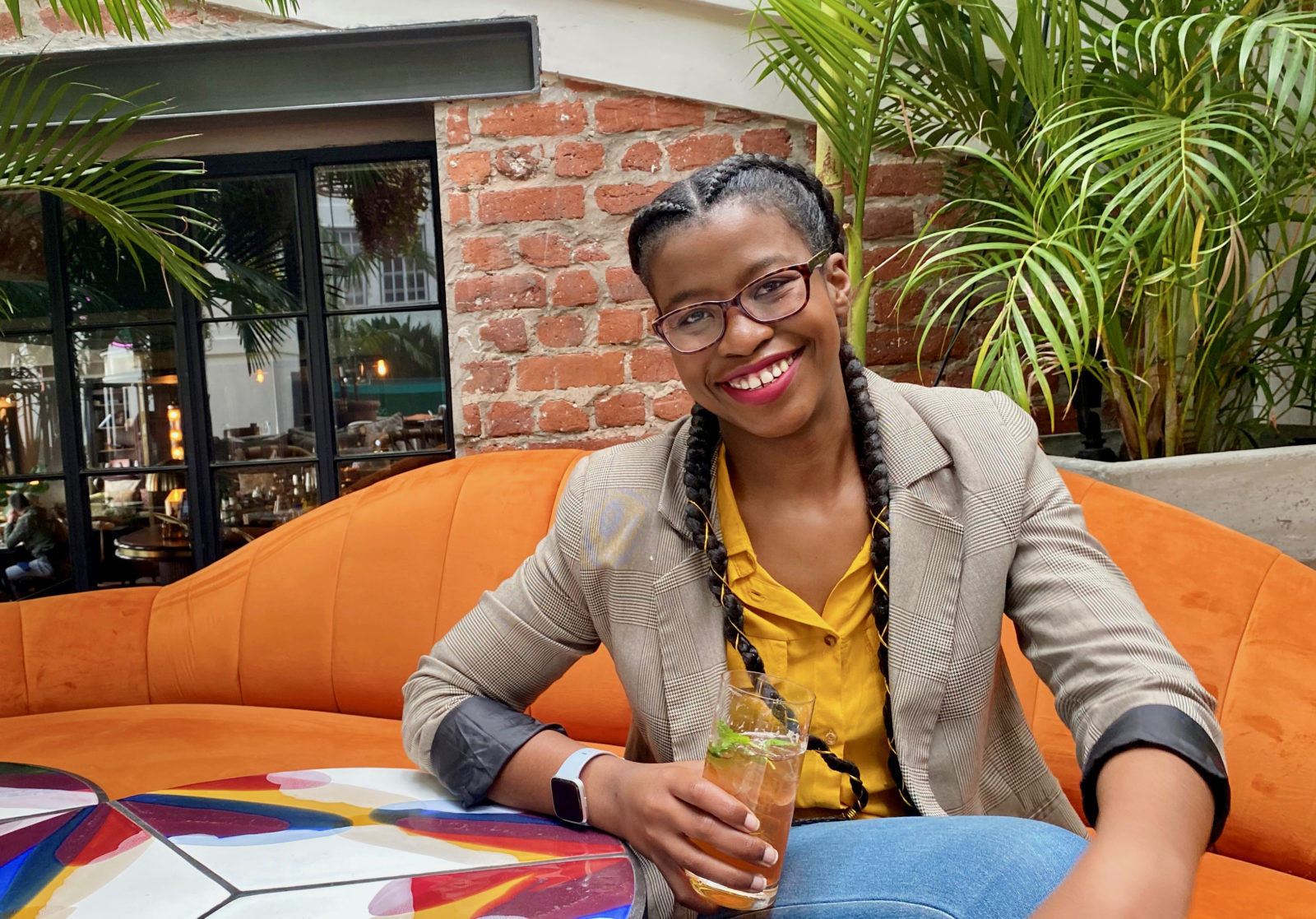 If life serves up lemons, let gin be your tonic. Syphon in soda. And you have a storyline for some of the chapters of Nzeka Biyela’s life to date, the thread of which has been as moody (taken to mean unpredictable) as her recently launched gin range.

To speed-read through the relevant bits of the 32-year-old entrepreneur’s life-to-gin. Her journey has taken her from the rural Zululand township of Esikhaleni via an Afrikaans primary school in Richards Bay to Durban Girls’ College. While there, on a career day, Stellenbosch University grabbed her interest with its less predictable options. “It offered a military academy and winemaking (viticulture and oenology).”

She knew very little about wine and had no interest in drinking alcohol. But winemaking sounded intriguing so she committed.

After a year of physics, chemistry and theory overload, she knew it wasn’t for her. A visit to the student advisory centre and a couple of assessment tests later, she switched to a BA in human resources management. Which didn’t grab her either. “But I didn’t want to keep chopping and changing.” So she saw it through. Got her degree.

Then she enrolled at UCT for a post-grad diploma in management, specialising in entrepreneurship. “Which was the best learning I ever experienced.” And which was to define her life going forward.

“You’re thrown into networking sessions. It’s real-life assimilation. Immediately you form a group you’ll be with for the year. The university loans you R50 – starting capital that you will pay back.” And you get going.

The year was 2011. “Within three weeks our group was selling food. Hustling (approaching) brands for sponsorship. Marketing the brands. Bos (tea) was just launching. They gave us a massive yellow vehicle. We were exposing them to the student market.”

In the classroom, what you learn you apply, she says. “You draw up a business plan with your fellow student partners. Your business has to be product-based; not a service. You launch to students and beyond. The course has churned out any number of successful businesses.”

Momentum, she says, starts high. It requires stamina to keep going. She found herself in a group with a high-flyer like herself. “Rob Heyns and I were the last two standing.”

He would become her business partner in several enterprises going forward, including their craft gin venture that folded during Covid-19 and their new premium gin (ad)venture now unfolding.

“We matched each other’s work ethic. We were both overachievers. Wanted to be the best.”

The past few years have seen them on separate career paths, but with convergences and collaborations.

They went into business together for the first time in 2012. Both had full-time jobs, he at Jack Black’s Brewing Company, she at Foschini. Part-time they launched an e-commerce craft beer “store”. Not making the beer, but curating monthly deliveries, adding food pairings to go with the craft beers and distributing orders to customers. Two years in, they sold the business to Yuppiechef.

After that Biyela worked with some big-name companies doing things like international brand equity management.

“Then in 2017 I got a call from Rob. He said, hey listen, craft gin is becoming a big thing. He suggested we look into it. We felt in a sense it was a saturated space. We had some great ideas but was there a place for another craft gin?”

To test the market, they decided on a crowd-funding campaign approach. “We offered rewards. We pre-sold our gin. It proved very successful for us.”

She talks about campaigns. And influencers. And having a great product (Sugarbird gin) with a story. And she tells me with passion about plateaus and dips and tipping points. Watching for them. Adapting. Changing rewards.

Then came Covid-19. Lockdown. “We tried selling hand sanitiser. We had to cut staff and salaries. We did whatever we could to sustain the business.” But other forces were also in play. They saw the liquidation during Covid-19 lockdown of their craft gin brand, “which resulted from a relationship clash within management”, as an opportunity to start afresh.

“We were forced into it, really. But we had a vision.

“We knew it would be a lot of work and that we couldn’t launch this time with crowd-funding. The environment had changed and with so many people struggling, it didn’t seem right.”

So this time “we’re bootstrapping”, Biyela says. This “we” not being “the royal”, but referencing her two partners, Heyns and entrepreneur-strategist Matt Schaal.

Their vision was “on purpose very different”, she says. They wouldn’t do another craft gin, “which people don’t buy for every day or to take to the braai, but usually for a gift or a treat. Craft gins are typically small-batch and much pricier than a premium gin.”

They were aware of the US and European success of “hard seltzer” – “refreshing, low-cal, no sugar”. Also the keto and low-carb trend: Biyela is into hiking, jogging, gymming and eating healthy. And aware, for instance, that in Europe two-thirds of people say they’re trying to lower their sugar content, with sugar having taken over from fat in the “dietary demon” stakes.

Tapping into this, their vision was to create a premium gin range to sit in the same space as Hendrick’s, Bombay Sapphire, Tanqueray London Dry. One that G&T purists could enjoy with tonic but that would go equally well with soda or sparkling water. “The world’s only gin that mixes with soda water and gives you that oh so perfect G&T flavour,” to quote their ad promise.

“We worked for three months solid with our recipe developer, in the lab.” Tasting. Adding botanicals here, subtracting them there. Among many others, juniper, orange peel and cardamom for the “Classic”; rose geranium and pinotage skins for the “Pink”; honeybush, angelica root, orange peel for the “Amber”. Refining. “Lots of trial and error,” says Biyela.

Ultimately, the trio of gins needed to tick three boxes.

Each had to taste right neat.

Each had to taste right with soda or sparkling water.

And each needed to go well with tonic, a la traditional G&T.

They launched the MOOD gin range last month. The “Classic” is their London Dry. The “Pink” and “Amber” are both New Western style, defined – I discover on my gin-exploration journey for this article – by artistic “flavour” freedom, which allows botanicals, aromatics, infusions, to share the stage with, even upstage, the juniper berry.

“For a gin to be classified as gin, it needs to have juniper berries,” Biyela spells it out. “A London Dry doesn’t have too many botanicals. It is juniper-dominated, often resulting in a piney flavour with, depending on the distiller or the gin, other supporting ingredients.” In case of theirs, a distinct citrus body.

“New Western gins usually have a gentler juniper influence, allowing other ingredients to drive the flavour.

“With London Dry gins, all ingredients are added before distillation. Nothing other than water – to get to the right alcohol percent (42% in South Africa) – is added after distillation.”

Their marketing is fun, young, bold, inspired by cult marketing guru Seth Godin’s purple cow methodology, which warns against being boring. “Our brand and branding is deliberately colourful. We wanted to stand out on the shelf. The purple cow in the sea of brown cows…”

To go back to its British origins, given that the Dutch can lay claim to the original gin: “The gin and tonic has saved more Englishmen’s lives, and minds, than all the doctors in the Empire,” to quote Winston Churchill. During these days of Covid-19, gin and soda is more likely to save people like me, happy with sugar in my desserts and pastries. And, hey, Sugar in my Bowl, for those familiar with the Erica Jong collection. But I gave up on tonic after learning, years ago, that each bitter little bottle has six to eight teaspoons of the sweet stuff. And you don’t even get to taste it. DM/TGIFood