First the toilets, next the tent: Refugee shelter inches towards shutdown as amenities removed 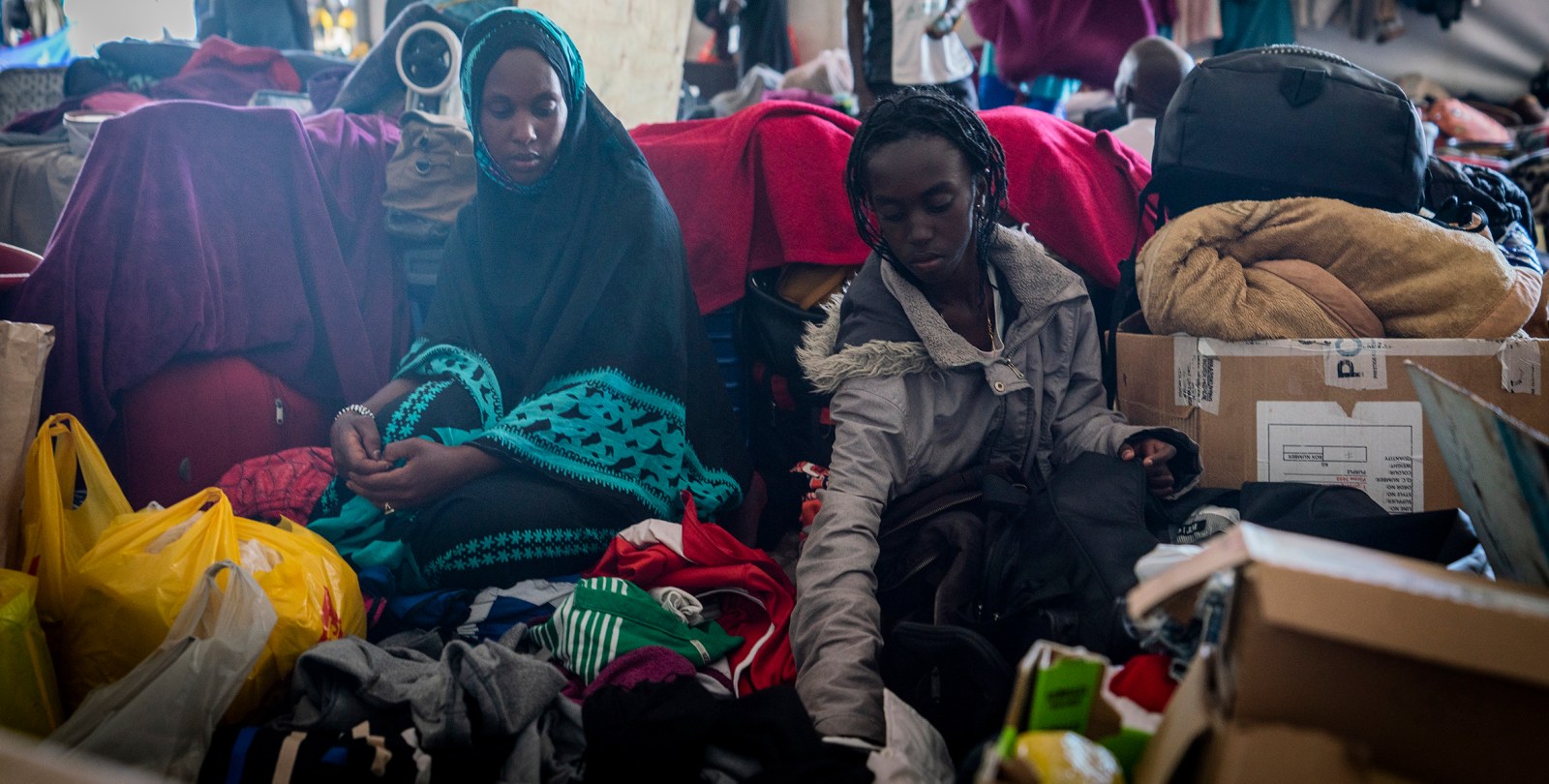 Women in the marquee in the Paint City shelter, Bellville. (Photo: Shiraaz Mohamed)

The temporary shelter housing refugees and asylum seekers at Paint City in Bellville may close down soon, according to the Department of Public Works and Infrastructure. This comes after toilets and showers were removed from the property. Squabbles and blame-shifting among officials have frustrated efforts to resolve the ‘refugee crisis’ which has dragged on for more than a year.

The Paint City temporary shelter, which has become a makeshift refugee camp, was established under Covid-19 Disaster Management Regulations during the hard lockdown. About 600 refugees have lived there for eight months after being moved from the Central Methodist Church on Greenmarket Square.

The group had occupied the church as part of a protest against xenophobic violence. They demanded group resettlement to a safer country, a request repeatedly denied by the United Nations High Commissioner for Refugees (UNHCR).

According to Zara Nicholson, media liaison for the Department of Public Works and Infrastructure, the marquee under which the refugees are housed was lent to the department by an events company and must be returned.

“We have now reached level one of the State of the Disaster and the events company requires the marquee to be returned as their events are picking up again,” she said.

The Department of Home Affairs did not respond to queries about what will happen to the refugees and asylum seekers once the tent is removed.

Before the pandemic, the group had been offered two options: reintegration into local communities or voluntary repatriation. Home Affairs Minister Aaron Motsoaledi said if either option was refused, the only alternative was deportation. While some refugees and asylum seekers were willing to reintegrate, many were intimidated into rejecting the offer.

Options for reintegration and voluntary repatriation still stand once the shelter closes down. Draft roadmaps have been compiled by both the City of Cape Town and the South African Human Rights Commission (SAHRC) to fix existing issues at the camp and provide assistance for refugees and asylum seekers to resettle in local communities or safely return to their countries of origin.

Nicholson was responding to queries posed by Daily Maverick following a visit to the camp where it was discovered that both the mobile toilets and showers had been removed. As a result, residents were forced to relieve themselves in buckets and plastic bags and bathe in makeshift communal showers.

The amenities, removed last week Monday, were provided and paid for by Public Works. But Nicholson says this was the City of Cape Town’s responsibility as the land on which the camp is located belongs to the city.

“The use of the property was agreed to by the mayor and Minister de Lille,” she said.

Executive Director for Safety and Security Richard Bosman confirmed that the city “did not place nor remove the ablution facilities or the tent at said site”.

With amenities being removed, the camp’s closure is imminent. The question now is what will happen to the refugees and asylum seekers living there.

Ongoing squabbles between Public Works, Home Affairs and the City of Cape Town over Paint City began in early April. As Daily Maverick previously reported, Home Affairs asked Public Works to find suitable land to accommodate the refugees and asylum seekers during the lockdown. A record of letter exchanges between Public Works Minister Patricia de Lille, Cape Town Mayor Dan Plato and Motsoaledi show Paint City was agreed upon as one of two sites to shelter the refugees. However, Plato apparently backtracked on arrangements to relocate the foreign nationals from the Central Methodist Church, claiming it was “premature”.

In a statement published on 5 April, he said the site was not ready for occupation as it was not compliant with Covid-19 regulations. The group was eventually transported to Bellville in an operation led by the SAPS.

Nicholson says a notification to end the arrangement was sent to Home Affairs and the City of Cape Town, “with a response from the City of Cape Town still refusing to take any form of responsibility despite being the landowners and housing the homeless people in the same area.”

The marquee is located in a parking lot opposite a city-owned homeless shelter.

To date, officials are still fighting over who is responsible for the camp and the foreign nationals residing there. Paint City is not managed by any government entity, but rather an NGO named Women and Children at Concern (WCC), owned by notorious refugee leader Jean-Pierre Balous and his wife Aline Bukuru. Balous does not live at the camp but still exerts influence over the group through Bukuru. The pair led a faction of the refugee group which occupied the inside of the church while the other faction was banished to the streets at Greenmarket Square. The rival faction, led by Papi Sukami, was relocated to Wingfield Military base.

Earlier this month, Home Affairs conducted a “raid” on the camp and 57 people (including Bukuru) were detained, allegedly after refusing to sign deportation forms. But according to SAPS, the police didn’t make any arrests.

Balous was arrested and accused of assault earlier in 2020 after allegedly attacking police officers during a court appearance. He and Bukuru are facing deportation after their applications for asylum were rejected.

The blame game among officials played out during a Parliamentary Committee meeting for Home Affairs on 20 October. Speaking at the meeting, a legal representative from the city said refugees fell under the Refugee Act and therefore were a Home Affairs responsibility and not local government’s. However, according to Motsoaledi, issues of accommodation and sanitation fell outside the ambit of Home Affairs as South Africa does not ascribe to refugee camps. He said the city had declined to cater for the asylum seekers and refugees. The responsibility was taken up by Public Works.

According to the city’s representative, the parking lot where the camp is located is occupying a space used by minibus taxis, creating a crisis. The situation had resulted in severe congestion and taxi violence.

Meanwhile, the SAHRC says numbers have increased at Paint City, placing significant strain on resources and making physical distancing difficult. It came to light during the parliamentary meeting that refugees and asylum seekers at the camp had not been assessed for documentation, health conditions, risk factors or integration. The SAHRC says the group refused assessments.

Earlier this month, Home Affairs conducted a “raid” on the camp and 57 people (including Bukuru) were detained, allegedly after refusing to sign deportation forms. But according to SAPS, the police didn’t make any arrests.

“The raid that you are referring to was conducted by the Department of Home Affairs. Although SAPS members were deployed to maintain law and order on the day, no arrests were made by police,” said Western Cape SAPS spokesperson Andre Traut.

The Department of Home Affairs did not respond to queries about the raid.

Following the raid, however, Home Affairs announced it had started the process of deporting 20 people from the group at Paint City. In a statement released on 6 November, the department wrote:

“The deportation of the 20 foreign nationals followed due process and was confirmed by the court on 02 and 03 November 2020 in terms of the immigration laws of the country. The affected foreign nationals have already been transferred to Lindela Repatriation Centre for deportation purposes.”

The department further stated that the Standing Committee for Refugee Affairs (SCRA) and the Refugee Appeals Authority (RAA) would continue to finalise appeals for refugee status.

“The Minister of Home Affairs would like to extend his sincere gratitude to the UNHCR for its intervention. The funds would be used to employ additional lawyers on a temporary basis to assist in the asylum processes.” DM