Forgotten people: Refugees who were moved to a camp outside Cape Town months ago feel abandoned 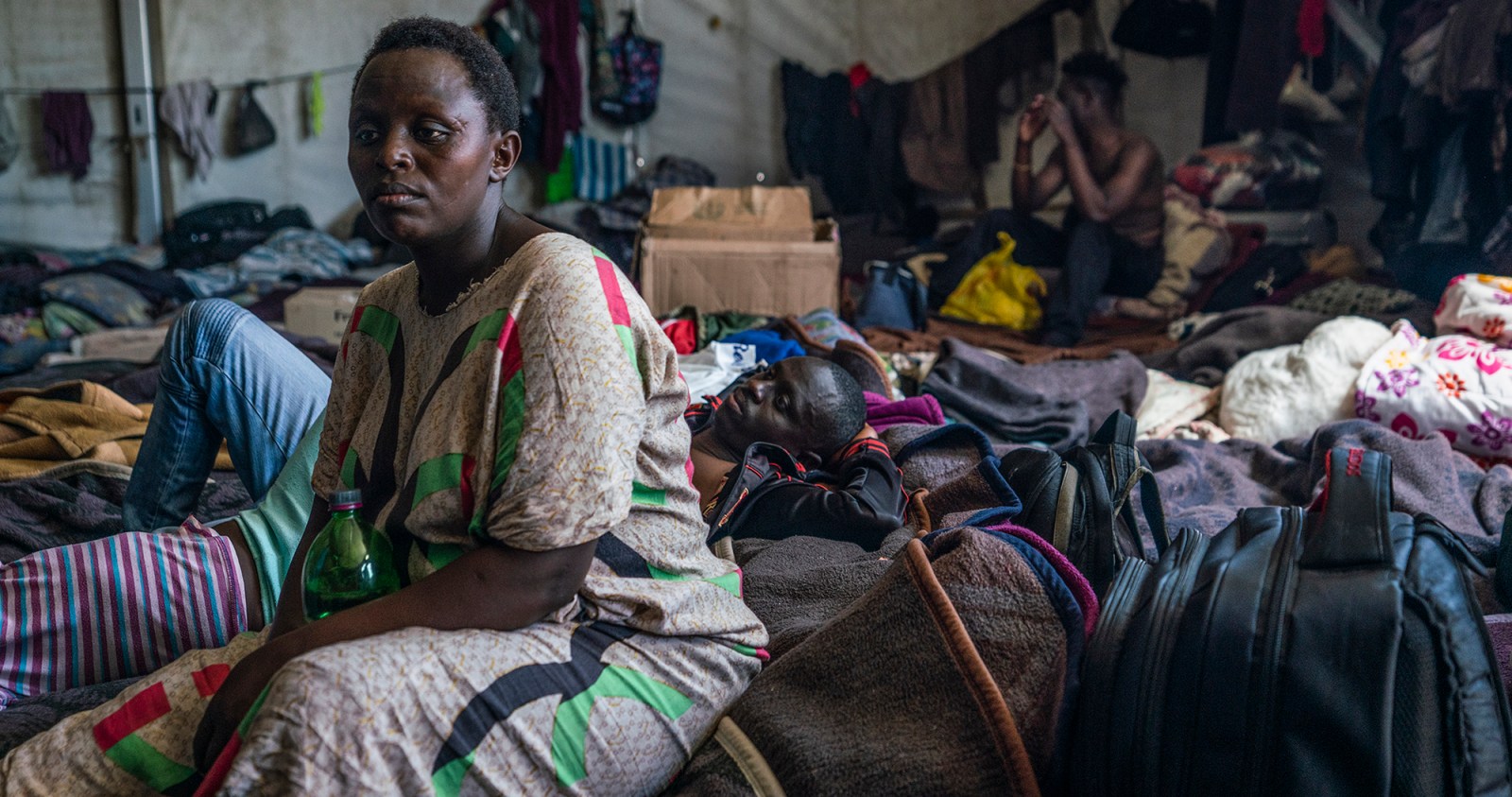 Refugees are seen in the tent in 'Paint City' an area in Bellville, Cape Town. There is hardly any space to walk and the heat inside is intense. 11 November 2020. (Photo: Shiraaz Mohamed)

The struggle continues for a group of refugees living in desperate conditions in a camp near Bellville outside Cape Town. This comes more than a year after they staged a protest in Cape Town, demanding to be moved to another country.

By arrangement through refugee leaders, I visited the temporary refugee camp in Paint City, Bellville, with two other video journalists this week. It started off well, and ended in tears – mine.

About 680 refugees have been in limbo for months at the temporary refugee camp.  They are among a group of refugees who staged a protest outside the UNHCR offices in Cape Town more than a year ago. The group of refugees found a safe haven in and around the Central Methodist Mission on Greenmarket Square but were removed after two court judgments. The plight of the refugees caused ructions between the City of Cape Town and the national government – the Department of Public Works and Department of Home Affairs – which were jointly tasked with coming up with a solution. (See an earlier article here )

During Covid-19 lockdown, the refugees were moved to Paint City and another temporary camp at  a Wingfield Military site in Goodwood.

On arrival at the camp, we found an efficient system in place to ensure Covid-19 health and safety regulations were being implemented. Our hands were sanitised and temperatures taken before our details were recorded in a register.

We were met by refugee leaders Hafiz Mohammed and Unice Akellow, who outlined the events of 29 October when a raid on the camp saw 57 people detained by home affairs officials for refusing to sign deportation forms.

I looked around the camp as Akellow spoke. There were plenty of children around.

Once the refugees realised journalists were in the camp, some hauled out banners protesting their situation. One read, “Refugees community is at risk. We are urging the SA government to stop the crackdown on our leaders.”

A few guys came up to us holding banners, waiting for us to take their photos. Some of them called kids playing nearby and got them to hold up banners as well.

Akellow described how the camp toilets had been removed a few days earlier. My first thought was, “How do they relieve themselves?” We were shocked to learn that they use plastic bags into which to relieve themselves.

Akellow pointed to a few buckets of water standing in the sun, explaining  they were left out in the open so the water could get warm enough to bath the children.

“We don’t have geysers and we can’t wash the kids with cold water… this is the only way we have to heat up the water.”

As we walked to the far end of the camp, where the makeshift communal showers and toilets were set up, we saw men and women hanging up their washing while others took it easy.

We were told that they sat under the washing lines to shelter from the blazing Cape Town sun. There was no shade other than that provided by the washing. Sometimes blankets are hung up to provide more shade.

As we continued walking, I saw groups of people behind the enormous tent that houses over 600 people. They were washing their clothes while others lined up waiting their turn to fill buckets from two communal taps. It seemed a long wait.

Some chatted while others seemed frustrated with the wait. A woman shouted at a child, asking him how many containers he was filling as she had been waiting a long time.

Another line was forming in the toilets and shower area, where buckets were waiting to be used for baths.

The facilities were rudimentary, to say the least. Blanks hung over pieces of rope provided a little privacy. Four cubicles comprised the showers while the toilets were divided in two – one for men, the other for women.

With no hot water, it’s cold showers for everyone. Children are washed outside the makeshift showers. They have no privacy.

The stench coming from the toilet area was overwhelming.

I watched three men clean the area with water and disinfectant after someone had finished using the toilet.

Upon closer inspection, I noticed one cubicle had an orange traffic cone that was turned upside down. That was the urinal.  In the second cubicle stood a bucket. Users placed a plastic bag over the bucket, did their business, then deposited the bag into one of two dustbins standing outside the cubicles.

“We are human beings. Just as we need to eat, we also have a need to use the toilet. This is not good treatment. They removed us from the church and brought us here without any food.

“Now they removed our toilets and showers. How can we live like this? We are not the first to complain about the South African government. They do not care about us. We are being oppressed.”

According to Luninga and other refugees, the toilets and showers were removed a few days before we arrived.

“Honestly speaking, we are suffering. We don’t have toilets and we have children. There are many children here. They took away the toilets and showers.

“The UNHRC is mandated to help us but they are not. We don’t expect any help from the South African government, so who is going to help us?”

Inside the tent, we found a few people lying on mattresses. One couple was busy eating. There was very little room to move around and the heat was intense.

Outside, a few children had gathered to sing their version of Heal the World and a song about South African President Cyril Ramaphosa. An unidentified woman then began talking about their living conditions and started crying. Some of the kids watching her also started crying.

It was at that moment that I switched off my camera and walked away. I too was emotional and tried to hide my tears.

We left after sanitising our gear and ourselves, thinking about the plight of these people and what will eventually be done to help them.

Responding to queries about the toilets, City of Cape Town spokesperson Jan Kruger said the council had neither placed nor removed toilets at the site, and referred Daily Maverick to the police and the Department of Home Affairs.

“The City is assisting with a process led by the department of home affairs (DHA) to verify the occupants on site and will continue to assist DHA in their processes around the refugees.”

Home Affairs had not responded at the time of publication. DM