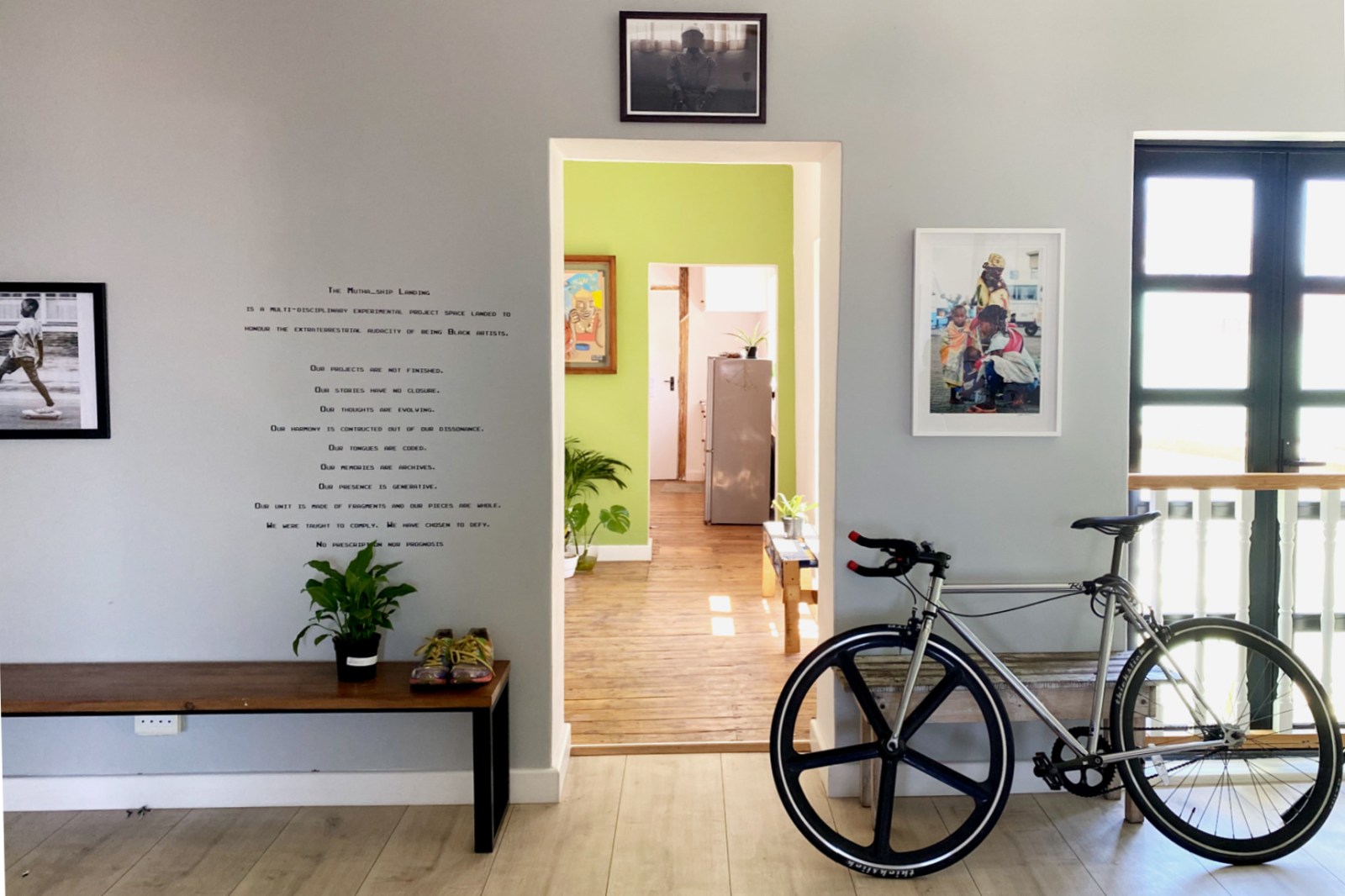 In Salt River, Cape Town, a group of local artists have carved out a space for artistic expression, engagement and discussion beyond the confines of traditional gallery spaces.

Tucked between a local travel company and a motor-parts store, a white door reveals a wooden staircase that leads to The Mutha_Ship Landing, a multidisciplinary project space in the heart of industrial Salt River.

“When I look out of the window, it feels so extraterrestrial. From here you’re seeing industry, you’re seeing the moving parts of the machinery of this country, but you’re also hearing the call to prayer. It’s a strange feeling,” says Julie Nxadi, one of the co-creators and organisers of The Mutha_Ship Landing.

On the pavement, a father pushes his daughter along on a black plastic motorbike. A man washes a car and afternoon traffic starts backing up, the sounds from outside interrupted by Dada Khanyisa drilling into one of the walls to hang the last works of art before the launch event in the evening. The space feels more like a home than a studio or exhibition space. The walls boast art from Mozambican photographer Jojo Guacha, visual creative Atang Tshikare and photographer Kim Makin. Books are scattered: postmodernism, modern consciousness, politics, philosophy. A bundle of imphepho sits beside burning candles on a nearby table.

“We’re inviting people to come and see what local artists are experimenting with. Some of the larger institutions want the polished, end result. We want this to be a space where you can bring your unpolished ideas,” says Nxadi, who compares the project to the Johannesburg-based incubation space The Centre for the Less Good Idea, and the Pan-African, Cape Town-based Chimurenga.

A seasoned academic with a Masters in Creative Writing from the University of the Western Cape, Nxadi is a Creative Artist Fellow for The GendV Project, a program that pulls together academics, authors, ethnographers and sociologists from India and South Africa to investigate gender-based violence and urban transformation. Nxadi’s approach to the subject matter is through space and art.

“I’m supposed to be a different voice. Everyone else [in the GendV Project] is talking about field work. This is my field work. Mutha_Ship Landing is an experiment in the medium,” says Nxadi. Part of her goal is to create safe spaces for black artists to explore subjects beyond the confines of violence.

“It’s difficult being a black artist and to be somewhere to think. It’s always the same, all we’re told to think about is violence. Violence will inherently be part of my work, but I won’t be confined by it,” says Nxadi. “Besides, you can’t explore violence in only one way. We have complicated experiences and complicated ways of living. Sometimes it’s about being in the same space as people who are as disillusioned and as optimistic and struggling with that imbalance. It’s about finding a community of people who also find things complicated. It’s about process.”

The project, which is mainly funded through donations, a go-get-funding page and personal finances, launched on Saturday, 31 October 2020 with an eight-day program which included an exhibition by photographers and artists, video installations, a curated brunch and rehearsals by theatre makers. For the first week of each month they will open their doors to the public showcasing and celebrating local black artists with talks and performances.

Duduetsang Lamola has been working at The Mutha_Ship Landing for the past three months. Her work consists mostly of collage, digital art and moving images. She’s busy with a virtual residency, hosted by the Africa|Nosy Art Exchange, a project based in Madagascar and her latest work reflects on lockdown and isolation.

“I think we all needed a moment to think, to pause and to stop collectively. There’s such a dystopian, apocalyptic energy and a lot of black artists are going back to kind of speculative dreaming of black futures,” she says.

Phokeng Setai is the co-creator of the Mutha_Ship Landing and is a research fellow and curator with the Centre for Humanities Research. He is doing his PhD in curatorial studies at the University of the Western Cape and is a research assistant in the curatorial department at Zeitz MOCAA. He says the traditional industry needs intervention and disruption.

“There’s a lack of spaces, of cultural spaces, that are inclusive in Cape Town. At first Julie [Nxadi] and I were looking for a workspace for ourselves but we soon realised the bigger necessity of space,” says Setai.

He calls the project an “experiment within an experiment” for practitioners and audiences outside of the city. “I see it as a multisite experiencing of art because we’re also experimenting with the format of allowing people to move to different spaces – Uncles Art Dealers which is down the road, Ganesh and The Mutha_Ship Landing.”

Setai says historically curatorial practice has largely been dominated by white practitioners, but over the past few decades more black curators have made spaces available for themselves and others in the industry. Setai mentions Gabi Ngcobo, the South African curator of the 10th Berlin Biennale for contemporary art in Germany, as one example. He says curatorial practice should be seen as an independent field of knowledge production.

“We’re seeing more curators emerge with social media. We are not limited to galleries and museums anymore, it can be done in a decolonized way,” says Setai.

“There’s so much money and exploitation involved in the industry that you don’t know what it means to do what you love,” says Nxadi. “When it comes to galleries, the thing is, you’ll hang me and then I’ll have some credibility as an artist. We want our own space, to dream, to imagine, to play and collaborate.” DM/ ML