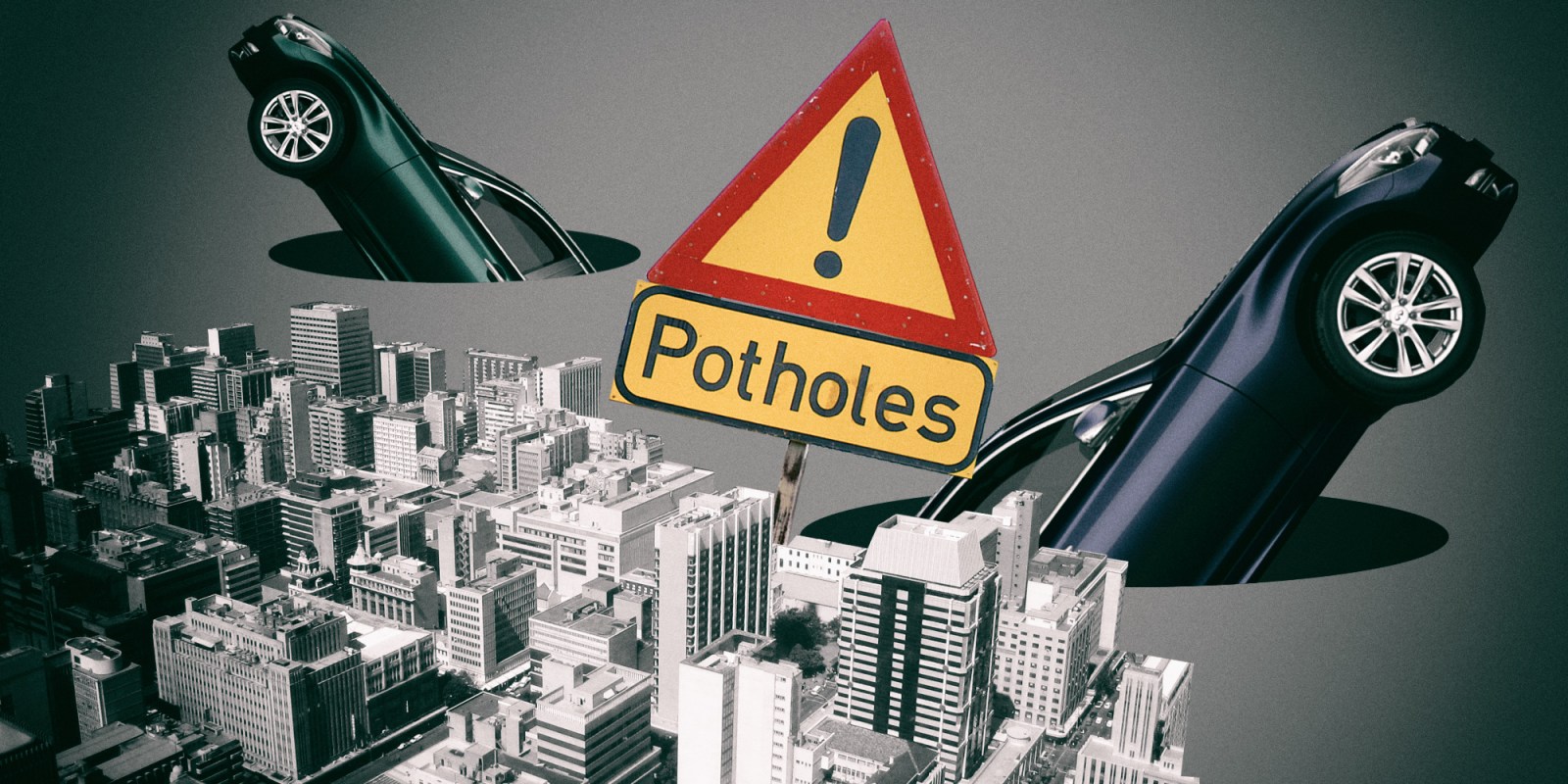 Daily Maverick readers have shone a light on how pothole damage to rims and tyres is becoming another municipal stealth tax in Joburg, and also a danger. (Illustrative image sources: Flickr / Wikimedia / pngall.com)

Most weary Johannesburg residents pick up the costs of damages caused to cars by the 90,000 and counting potholes on our roads. This woman didn’t.

Daily Maverick reader Beulah Breuker and her husband have a 1983 Datsun 1400 pick-up. “It’s roadworthy, it’s not a skedonk or a skoroskoro,” says the executive assistant who works in Johannesburg. In 2016, her husband hit a pothole he couldn’t avoid on Ontdekkers Road between Abbott and William Nicol and the Datsun immediately lost braking ability. He took back routes to get home safely that day.

“The damage was severe. The braking system, the caliper and suspension were damaged,” said Breuker. Because the car is old, their insurers wanted to write it off, but Breuker took the payout, bought back the car and had it fixed.

Then she decided she was going to sue the city for the pothole damage. “It’s a hassle and it took perseverance, but I don’t like to lose money. The true value of a car is the difference between having a car and not having one. I am of the opinion that I pay taxes and must get service in return.”

The commissioner at the Small Claims Court, which sits at magistrates’ courts, asked why he should hear her case. Petitioners to the Small Claims Court are not allowed to bring cases against government departments. But Breuker persuaded the commissioner that the Johannesburg Roads Agency, responsible for the city’s roads network, can legally be classified as a company.

Breuker’s case went ahead. Although a layperson, she is tenacious and passionate about the law. “If someone says ‘let’s go to court’, I say ‘let’s’. The case took 18 months from the date of the incident. There were many postponements and the JRA was absent once.” Lawyers for the agency tried to settle a lesser amount with Breuker, but she refused.

On 17 May 2017, the Small Claims Court ruled in her favour and she was awarded damages of R12,080.04 which the JRA deposited into her account. It’s the first time that a Johannesburg resident has taken the city to Small Claims Court and won, says Breuker, a precedent of which she is proud.

The pothole tax
Daily Maverick readers have shone a light on how pothole damage to rims and tyres is becoming another municipal stealth tax and also a danger.  Johannesburg is a dangerous city and if you happen to hit a pothole and get stuck at night or on a quiet road, the cost could be much higher than a repair to a rim or tyre.

When we asked for feedback in September, many readers sent responses.

“I had several rims damaged by potholes – at night and in rain,” said a reader who added, “I even hit one twice after it had been poorly repaired and reopened.” Another wrote “I have a small hot(ish) hatch as my daily with low-profile tyres – [I often have] cracked rims, dented rims, gouged walls. Take a look in the parking lot next time for tyre sidewall damage on cars. It’s revealing.”

Another reader wrote: “My granddaughter forwarded me your article regarding JRA. At the beginning of lockdown in March, I hit a pothole in Bryanston which caused a bubble in the tyre and I had to buy a new one. Then about six weeks later, I hit a pothole in William Nicol Drive [and the damage was so] bad that it actually split my rim which had to be replaced at a cost of almost R6,000. Our roads are in a shocking state and soon we will all have to drive 4×4 vehicles.”

Another Bryanston reader reported “I hit potholes at night in June 2020 and had to have two rims straightened and my wheel balancing and alignment done. Cost about R2,000.”

Another DM reader responded with: “Are you kidding? We have had to replace/repair a few rims/tyres due to pothole damage. I think unless you drive a truck you are not immune to damage. It has become part of the SA driving experience.”

Readers complained that London Road in Alex is a death trap; so is Bedfordview where the poor roads and high hijacking incidence make journeys perilous; a reader sent images of pothole damage in Wessels Road in Sandton and we also had reports from Stewart Drive in Lorentzville.

Roslyn Cassidy had praise for JRA, but she said the agency’s popular Find&Fix app no longer works.

“When I first discovered the JRA Find&Fix app about four years ago, I fell in love with it. The app was easy to use and reporting of road issues (traffic lights out, street lights out on major roads, potholes, blocked drains, guard rails missing), almost always achieved a result within a reasonable period.

“The JRA fixed the guard rails because I relentlessly reported how many vehicles use the M2 Cleveland off-ramp.  They fixed the street lights because I reported how many people use the bridge to get to and from work. And they came up with a creative solution to light up the main part of the bridge because vandals drove a truck into the concrete poles to steal the solar equipment powering the lights.

“But the app no longer works and now you need to email using the hotline.  I think the JRA has been barely holding itself together with the resignation of CEOs over the last four years,” said active citizen Cassidy. Two other readers tried to use the city’s system for claiming damages, but faced long delays and no communication.

We will try to keep following up for you. DM