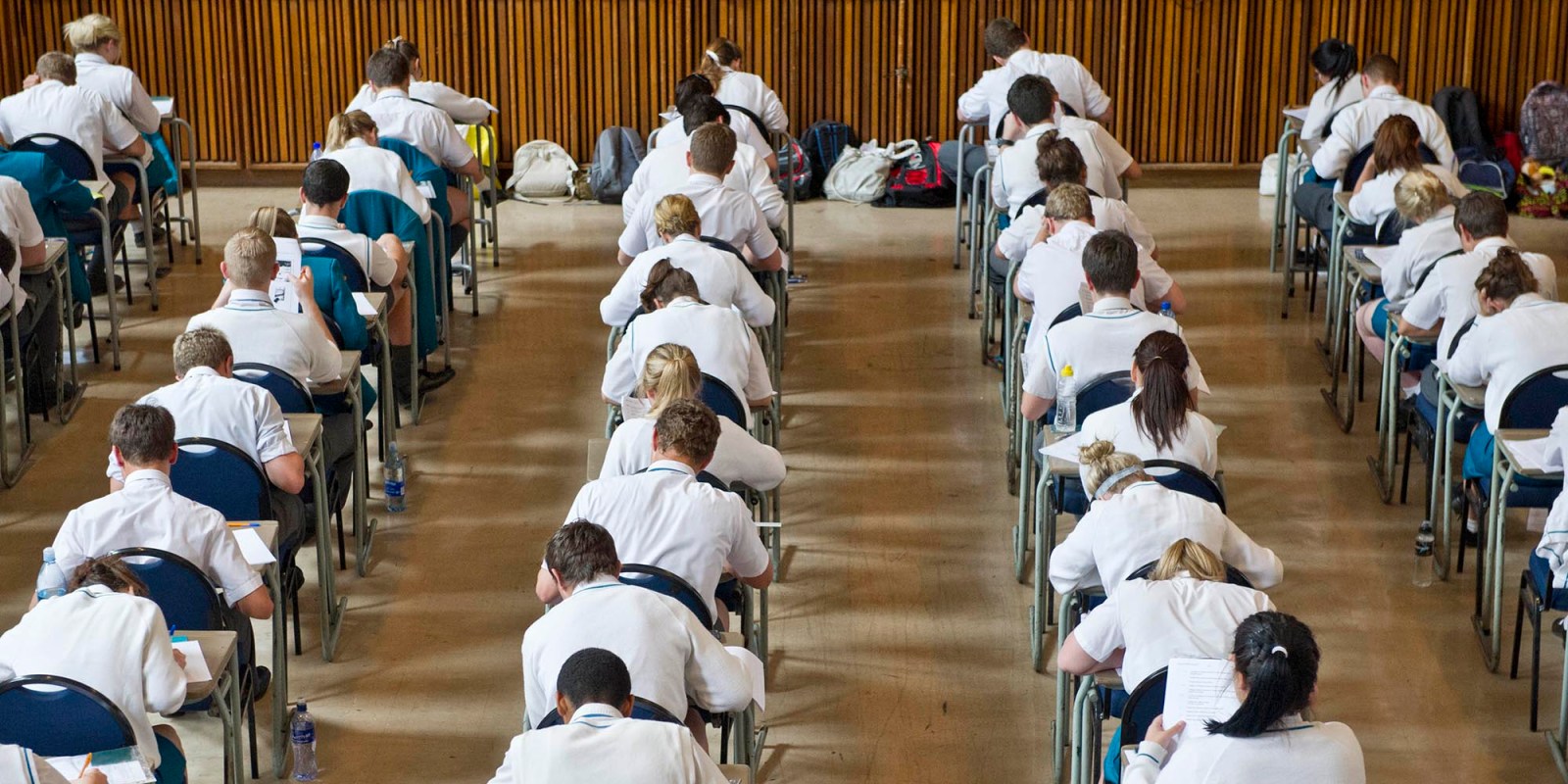 The Department of Basic Education told Parliament’s education committee it is the largest examination to ever be administered in the country’s history. (Photo: Gallo Images / Foto24 / Craig Nieuwenhuizen)

In just over a week, SA’s basic education system will administer its largest National Senior Certificate examinations to date, with more than a million candidates. In a briefing to Parliament’s education committee on Tuesday 27 October, both the regulatory body Umalusi and the Department of Basic Education signalled their readiness for the matric exams.

The total number of candidates who will sit for the 2020 National Senior Certificate (NSC) examinations in South Africa from 5 November until 15 December is 1,058,699.

The Department of Basic Education (DBE) told Parliament’s education committee it is the largest examination to ever be administered in the country’s history.

Covid-19 disruptions to education are innumerable.

The June NSC exams normally written by candidates who are rewriting their matric, including those writing subjects they carried over from their 2019 matric exams, were postponed due to the pandemic.

And this cohort of candidates was carried over and combined with the 2020 final examinations.

“The preparatory exams were a good test run to give us an indication as to whether the system will run properly during the final exams,” said Cheryl Weston, an educational director for the department.

Weston was presenting on the readiness of the class of 2020 to undertake the examinations. She further highlighted that learner support structures, which saw matric pupils being prioritised, were provided to pupils during the hard lockdown. Provincial education departments provided learners with differentiated learning support options such as radio, television, and online lessons and learning material hosted on 330 zero-rated websites.

However, these were not accessible to all learners, especially those in no-fee paying schools.

While the department was commended for setting up the examinations and seemingly being ready to administer them, MPs were concerned that learners might not necessarily be prepared.

“Most of our Grade 12 learners are under severe strain and pressure, especially with the advent of the Covid-19 pandemic,” remarked DA MP Chantel King. “A lot of things have happened in their homes and in their communities which will eventually have a bearing on how they perform in their exams.”

IFP MP Siphosethu Ngcobo was concerned about learners’ emotional preparedness to sit for the exam: “How confident are you about the emotional readiness of learners?” he asked.

Weston told MPs that “whilst significant efforts have been made to recover the academic year and provide extraordinary support to the learners, the total impact of the abnormal educational context remains an unknown and therefore a concern”.

System readiness in each province

In Gauteng, Umalusi reported the availability of 30 marking centres and 12,148 markers.

The province had the highest increase in the number of marking centres – there were only 10 in 2019.

“Due to the shortages, GDE [Gauteng Department of Education] will embark on a staggered marking approach from 5 December, especially in language papers,” said Mary-Louise Madalane, Umalusi’s senior evaluation and accreditation manager.

A total of 34 marker shortages were identified in Afrikaans and English home languages.

According to Madalane, the province gave assurances that it would extend the number of marking days to cover the shortage.

The province appointed 5,915 markers and has 23 marking centres.

“The PED [provincial education department] increased the number of marking centres from 17 in 2019 to 23 in 2020 and is intended to cater for social distancing in line with the number of markers appointed,” Madalane said.

The province appointed 2,171 markers and has not reported any marker shortages.

The province appointed 7,880 markers and has 30 marking centres. There is a shortage of four markers for Religious Studies.

The province is yet to appoint markers for English Home Language, Afrikaans first, second and additional language.

It is in the process of recruiting markers for these subjects, said Madalane, but cautioned that if markers for the subjects cannot be found, the province will have to extend the marking period.

Five more marking centres were made available, bringing the total to 28, an increase from last year’s 23, with 7,150 markers.

According to Umalusi, the province reported no marker shortages and added three more marking centres. It has 4,082 markers.

Northern Cape has a shortage of markers in History, Afrikaans, Setswana, English and Mathematical Literacy and the province took an executive decision to extend the marking period.

The province recruited 2,625 markers and has no reported shortages. Two more marking centres have been made available.

“There was evidence on marker shortages in a number of subjects in English Home Language and History,” the regulatory body noted.

The province is said to be addressing the shortages. A total of 2,533 markers were appointed and it is the only province that did not increase the number of marking centres.

Equal Education to hold a picket outside Parliament

Education civil society organisation Equal Education will hold a picket outside Parliament in Cape Town, and at the National Treasury in Pretoria on Wednesday 28 October, to urge the Minister of Finance, Tito Mboweni, to reverse cuts made to the basic education budget earlier this year.

“These cuts continue a trend of deprioritising basic education – and the consequence is that the right of learners to basic education is compromised,” the organisation said in a statement.

At least R1.7-billion was cut from the school infrastructure grants, and a further R4.4-billion was reallocated within these grants to cover Covid-19 expenses. DM