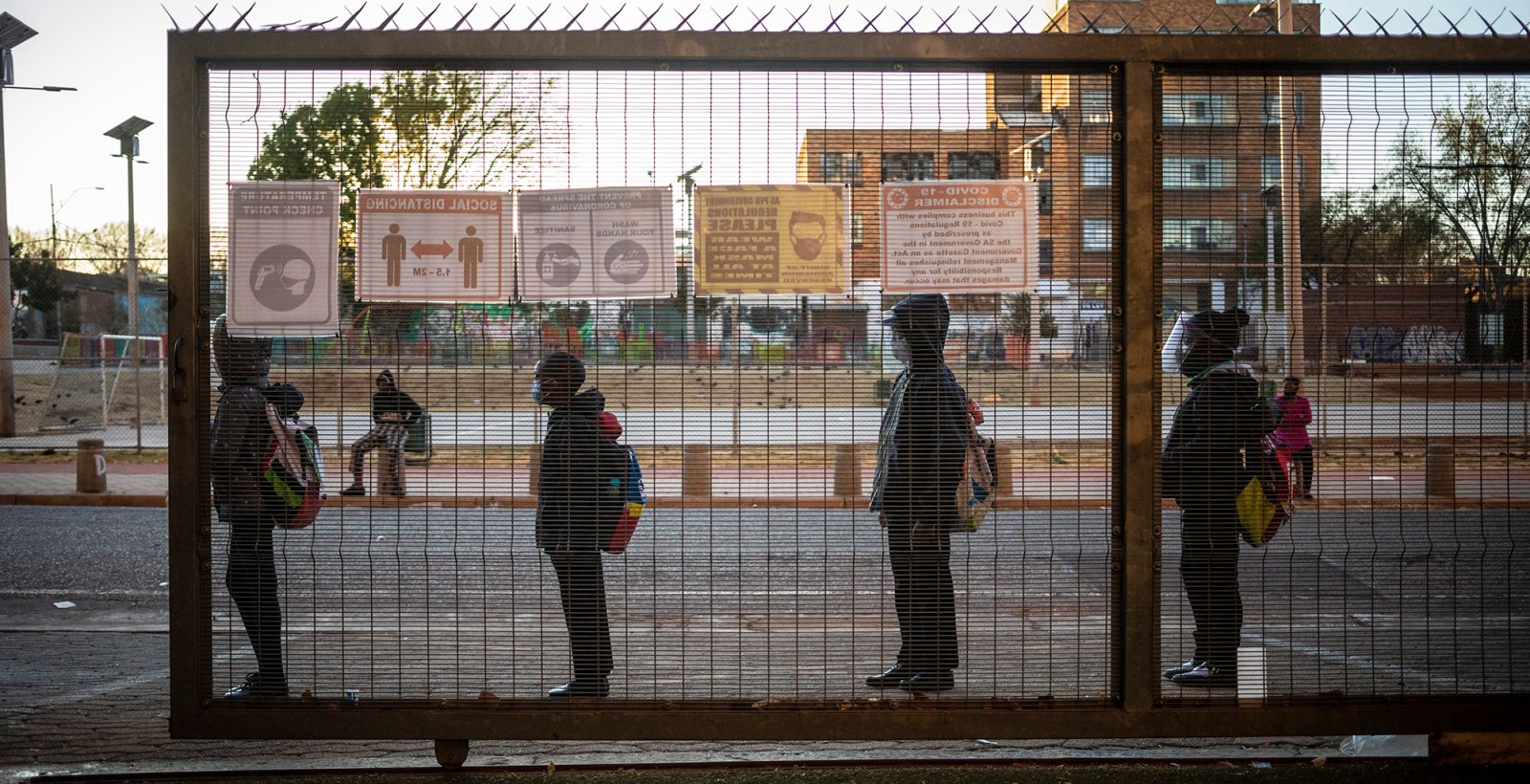 Children wait outside the school gate while wearing protective clothing in the form of masks and face shields as part of their safety due to the Covid-19 coronavirus pandemic, in Johannesburg, South Africa, 13 August 2020. (Photo: EPA-EFE/KIM LUDBROOK)

The government prioritised Grade 12 and 7 pupils (both recognised as exit grades in SA’s education system) when schools were gradually reopened in June. But now research shows that grades that were not equally prioritised suffered a massive loss of school days in the school year.

The second wave of the National Income Dynamics Study, Coronavirus Rapid Mobile Survey (NIDS-CRAM), released on 30 September 2020 calculates that over 40% of school days will be lost for most children in 2020 because of the pandemic.

The study also found that learners who attend wealthier schools were twice as likely to attend school despite their grades being physically closed compared to children in no-fee paying schools.

Education expert, Professor Nicky Roberts made the same observations: “There are learners who haven’t had anything. So we are estimating that children have lost a full six months of learning and even now they’ve gone back, it’s patchy because they can go one or two days a week”.

Although the Department of Basic Education (DBE) has been tracking data relating to drop-out rates, availability of water and sanitation facilities at schools, and emerging Covid-19 cases, DBE’s chief director of communications, Elijah Mhlanga confirmed to Daily Maverick that access to learner material at the time of the harsh lockdown could not be tracked because the material was uploaded on the website.

“It’s difficult to have stats when the learning material was uploaded on the website for parents to access,” he said. “It’s impossible to monitor what people do in their homes”.

Mhlanga pointed out that the department zero-rated 330 sites with education material for parents to use with their children.

“Some parent’s did approach schools to collect material for their children. The department said parents must go [and] fetch these packages physically prepared by the schools,” he argued.

Admittedly, the DBE made efforts – after much public pressure – to make educational content available online through zero-rated websites, and via the television and radio.

This does not dispel the fact that despite platforms and channels being made available for learners to access learning material, these were not easily accessible to every single learner, especially for pupils in no-fee paying schools.

Survey results published by civil-society organisation Equal Education (EE) from a study they conducted during the early days of the strict lockdown in April, show that 65% of learners interviewed had access to the internet at home.

But 25% of them said they struggle with network coverage while 50% said they could not afford data.

Universal access to the internet and the affordability of data are critical issues in South Africa’s digital divide landscape. And the government has not done much but acknowledge that it is a challenge, especially in the digital-age economy.

A pilot study conducted in Soweto on behalf of the Department of Basic Education by a Wits University associate professor Brahm Fleisch revealed that foundation phase pupils in Grade 1 – 3 did not participate in any form of reading or mathematics during Levels 5 to 3 of the lockdown.

Two qualitative pilot surveys were reportedly conducted as part of the DBE workbook chart project to track how parents responded to the workbook chart designed to increase parental and community involvement in the governance of schools.

“While the focus of the study was on how parents responded to the DBE workbook chart, we asked a number of questions about children’s learning during the lockdown,” Fleisch said.

According to Fleisch, other major insights that emerged from the survey were that “children did watch any educational television and although parents had access to some basic form of internet, it was mostly used for WhatsApp texting and not educational purposes”.

EE’s survey also gives a nod to the indication that access to learning material during the higher levels of the lockdown was skewed because some learners were restrained by access to the internet and learning devices.

“We know from previous crises in other parts of the world that learning is likely to have been severely affected,” Roné McFarlane, EE’s co-head of research said.

The Basic Education Department has implemented a number of assessment changes for lower grades, especially for grades that were not prioritised during the phased reopening of schools in a bid to ensure that learners are not tested on elements of the curriculum they did not cover while on lockdown.

“Having assessments is a good thing, so long as they aren’t a high-stake assessment,” Roberts said. “If you are going to have an assessment that will determine if a learner will pass or fail, then that’s not a good thing.”

Roberts explained that assessments were necessary towards the end of the year to give “a good sense of where learners are at [in terms of their learning outcomes]”.

Nonetheless, McFarlane cautioned that “successes in preventing learning losses during extended school closures have been rare in developing countries”. DM