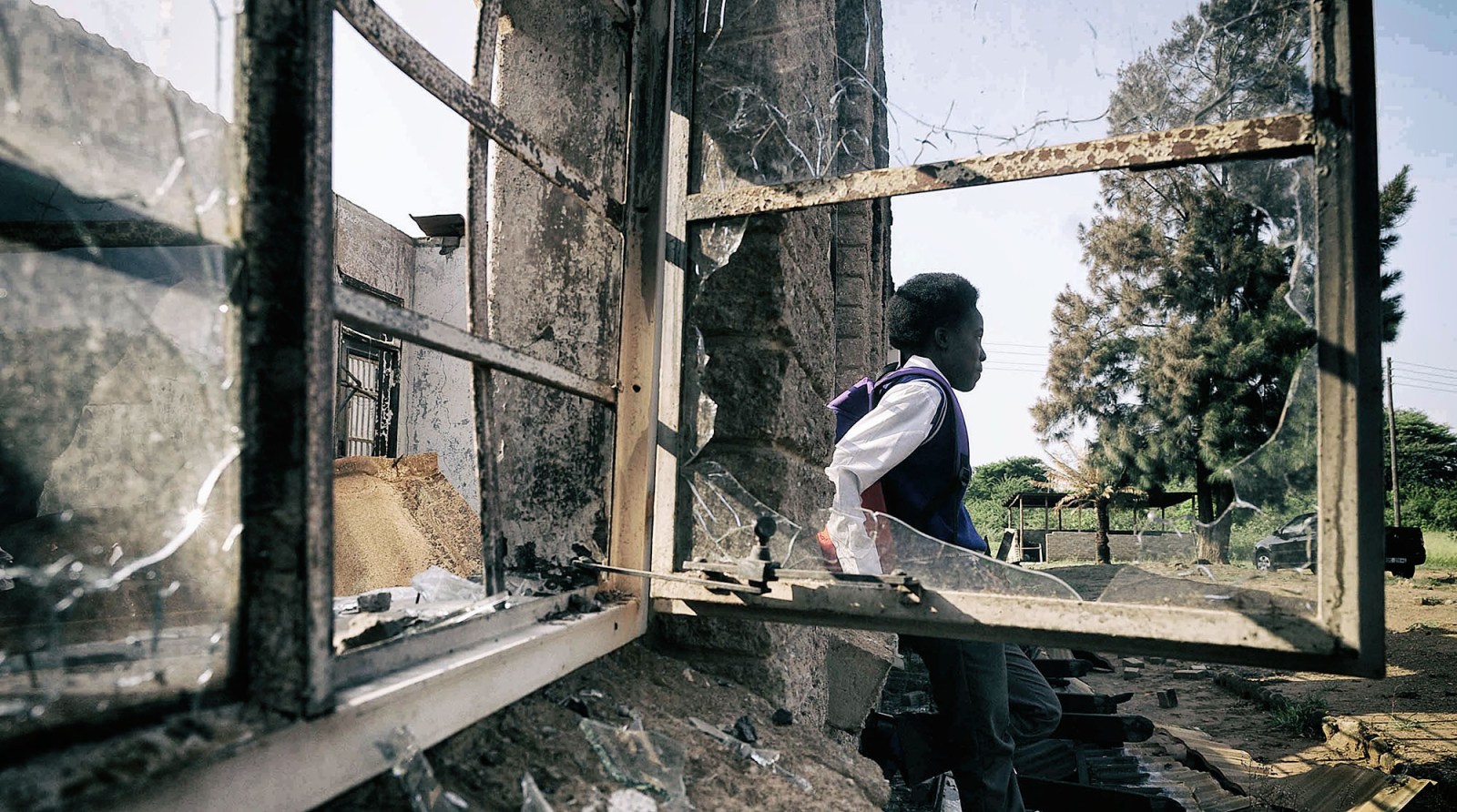 While the cuts and reallocations are intended to support Covid-19 relief and overall government response to the pandemic (per National Treasury’s instruction), they will have far-reaching and long-lasting implications for school infrastructure, says the writer. (Photo: Gallo Images / Sowetan / Thulani Mbele)

Almost 2,000 school infrastructure projects across SA will come to a halt as a result of massive cuts in the education infrastructure grant to support Covid-19 relief.

The national education infrastructure grant (EIG) has been slashed by another R2-billion, to divert funds to support Covid-19 relief.

This was announced in the 2020/2021 Supplementary Budget late in June.

Before the Covid-19 pandemic, when Finance Minister Tito Mboweni presented the national Budget in late January, he announced that the National Treasury was tightening its finances to cut back on expenditure. This resulted in a R1.9-billion cut to the education infrastructure grant.

The double cuts do not bode well for schools in provinces that rely on the grant for infrastructure development as they struggle to stretch their equitable share allocation.

According to the national Department of Basic Education, a total of 1,938 projects will be affected by the latest grant reductions.

In addition to the cuts, reprioritisation of about R4-billion to the grants was made in the 2020/21 supplementary Budget, said Borman. 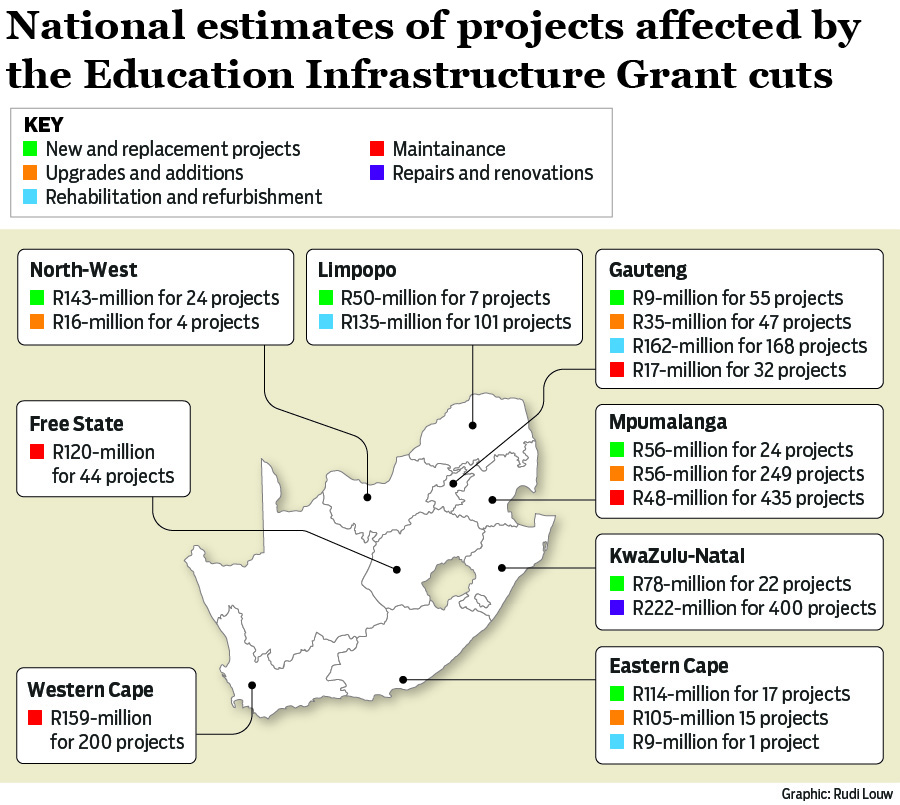 While the cuts and reallocations are intended to support Covid-19 relief and overall government response to the pandemic (per National Treasury’s instruction), they will have far-reaching and long-lasting implications for school infrastructure.

In his presentation to Parliament’s appropriations committee, the director-general of the basic education department, Hubert Mweli, admitted that the cuts will extensively affect their “commitment to addressing the infrastructure backlog related to the minimum uniform norms and standards for public school infrastructure”.

The department has failed to effectively address infrastructural challenges in schools for the last 26 years.

But more critically, the cuts occur against the backdrop of a public education system that scrambled to provide the basic water and sanitation infrastructure to meet Covid-19 regulations requirements, exposing the rife inefficiencies of the national and provincial departments.

The inefficiencies span years of poor implementation of infrastructure projects and under-expenditure by provincial departments, which resulted in project delays, cost overruns (which necessitate more budget allocations) and wasteful and fruitless expenditure. 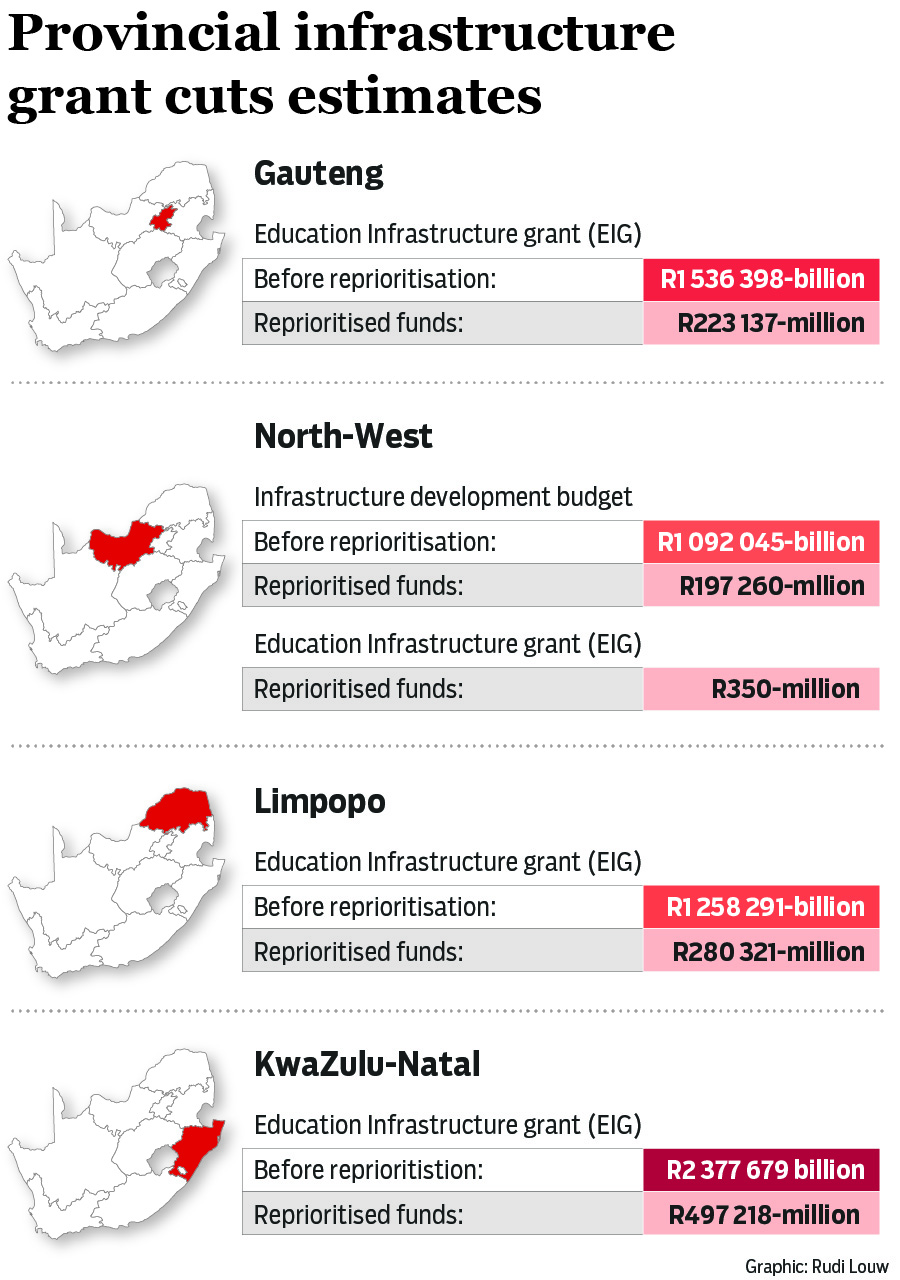 Let’s unpack the cuts in two of the nine provinces: Limpopo and North West:

Questions sent to the Limpopo education department were ignored.

Details from the special adjusted estimates of provincial revenue and expenditure for the province show that the education infrastructure grant was reduced by R280-million.

And the money was said to have gone towards PPE procurement for schools.

The department sourced additional funding of R397-million internally, of which R255-million was diverted towards PPE procurement, and R15-million reprioritised from the equitable share was also used for PPE.

According to Daniel Matiti of the National Association of School Governing Bodies (NASGB) in Limpopo, school structures in the province’s most rural villages are in such a dire state that many were declared unsafe before the reopening of schools.

“The situation is so bad that many schools are platooning because you cannot have 60 learners in one classroom under these circumstances.

“Only grades 7 and 12 go to school at least twice a day, every other grade can only go once a week

“And this is all because we lack infrastructure,” he said.

Matiti says they ordered mobile classrooms six years ago, and have been waiting for them ever since.

“What’s disheartening is that before schools opened, all school governing bodies in the province representing schools with infrastructure problems submitted reports to the MEC and the premier informing them of the class shortages.

“You know what we were told? They cannot help us now because water and sanitation are the main concern now,” he said.

Matiti added: “If schools did not know how to make sacrifices, our children would still be learning under trees.”

Limpopo, after KwaZulu-Natal, has the highest number of illegal pit latrines at 2,524.

Questions of how many school infrastructure projects would be affected by this reallocation were not answered by the department.

“The most worrisome thing about these cuts is that there are schools that have to share one building because some do not have enough classrooms,” said Steven Tladi, NASGB’s secretary in North West.

“You can’t expect over 1,000 learners to share a mobile toilet daily and only clean it once a week – that is a health hazard, but it’s happening,” he added.

While every other cent is diverted towards Covid-19 expenses, many other programmes, like infrastructure, are left with minimal funds to perform their functions.

Globally, public sector resources are shrinking as governments battle the pandemic and the economic repercussions.

The Center for Global Development says public education funding in low-income countries might be stagnant after the pandemic and “presents a very real risk that the SDG for education will fall even further off track”.

According to Borman, South Africa is likely to see a continuing downward trajectory in basic education funding.

“This will not only have devastating effects on the ability of the education sector to realise learners’ right to basic education, but may reverse some of the gains already made.

“This will be especially felt in areas such as infrastructure, sanitation, and basic service delivery, with the greatest burden felt by poor rural learners,” she said. DM