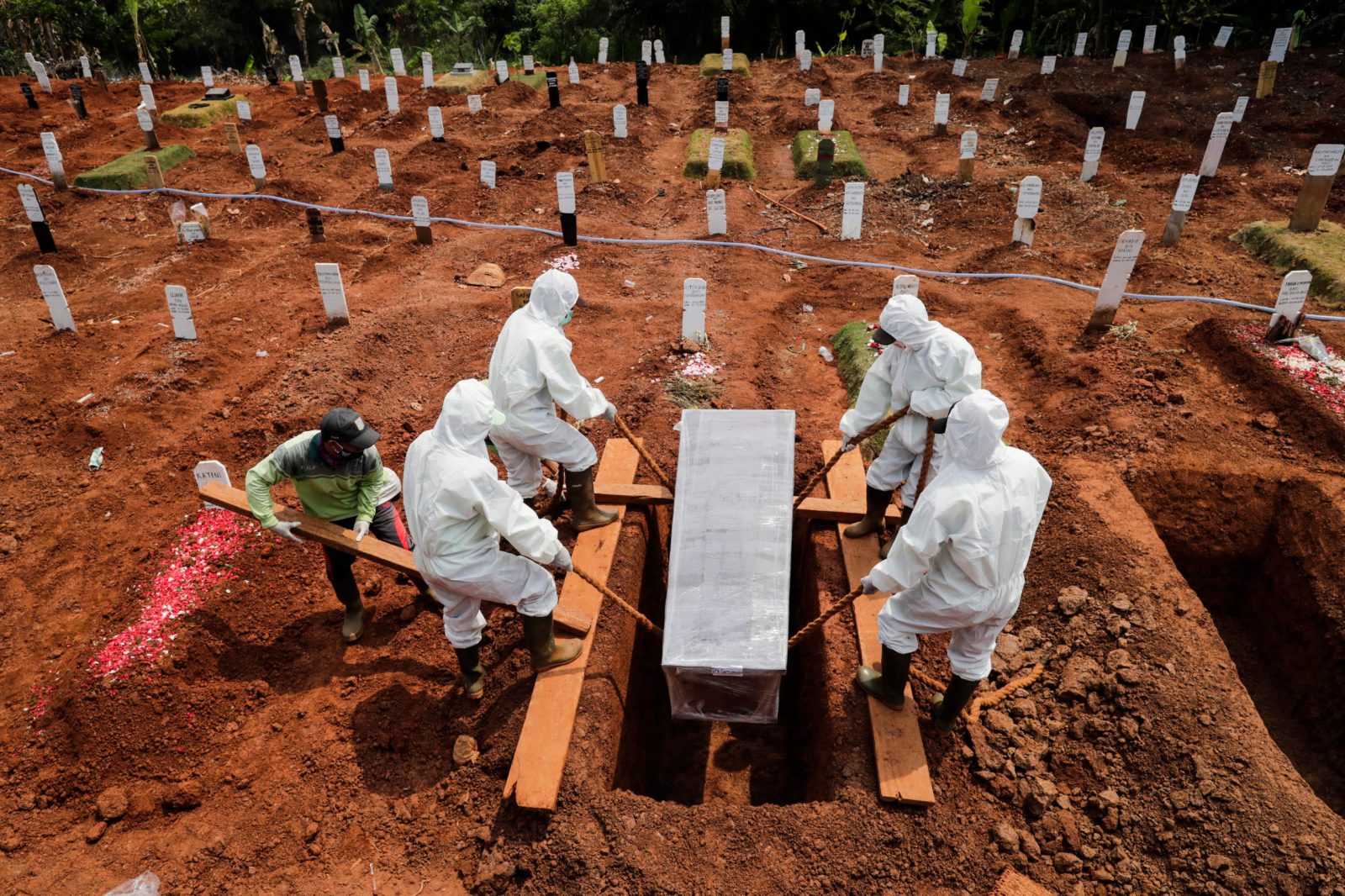 epaselect epa08653726 Workers clad in hazmat suits bury the coffin of a coronavirus victim during a funeral at Pondok Ranggon cemetery in Jakarta, Indonesia, 08 September 2020. According to media reports, Jakarta?s Pondok Ranggon Covid-19 dedicated cemetery is expected to run out of space for victim's graves in October. The city administration has burried more than 5,000 bodies under Covid-19 protocols since the pandemic began. EPA-EFE/MAST IRHAM

Sept 29 (Reuters) - The global coronavirus death toll rose past a million on Tuesday, according to a Reuters tally, a grim statistic in a pandemic that has devastated the global economy, overloaded health systems and changed the way people live.

The number of deaths from the novel coronavirus this year is now double the number of people who die annually from malaria – and the death rate has increased in recent weeks as infections surge in several countries.

“Our world has reached an agonizing milestone,” U.N. Secretary-General Antonio Guterres said in a statement.

“It’s a mind-numbing figure. Yet we must never lose sight of each and every individual life. They were fathers and mothers, wives and husbands, brothers and sisters, friends and colleagues.”

It took just three months for COVID-19 deaths to double from half a million, an accelerating rate of fatalities since the first death was recorded in China in early January.

More than 5,400 people are dying around the world every 24 hours, according to Reuters calculations based on September averages, overwhelming funeral businesses and cemeteries.

That equates to about 226 people an hour, or one person every 16 seconds. In the time it takes to watch a 90-minute soccer match, 340 people die on average.

“So many people have lost so many people and haven’t had the chance to say goodbye. Many people who died died alone… It’s a terribly difficult and lonely death,” World Health Organization (WHO) spokeswoman Margaret Harris told a U.N. briefing in Geneva.

Experts remain concerned that the official figures for deaths and cases globally significantly under-represent the real tally because of inadequate testing and recording and the possibility of concealment by some countries.

The response to the pandemic has pitted proponents of health measures like lockdowns against those intent on sustaining politically sensitive economic growth, with approaches differing from country to country.

The United States, Brazil and India, which together account for nearly 45% of all COVID-19 deaths globally, have all lifted social distancing measures in recent weeks.

“The American people should anticipate that cases will rise in the days ahead,” U.S. Vice President Mike Pence warned on Monday. U.S. deaths stood at 205,132 and cases at 7.18 million by late Monday.

India, meanwhile, has recorded the highest daily growth in infections in the world, with an average of 87,500 new cases a day since the beginning of September.

On current trends, India will overtake the United States as the country with the most confirmed cases by the end of the year, even as Prime Minister Narendra Modi’s government pushes ahead with easing lockdown measures in a bid to support a struggling economy.

Despite the surge in cases, India’s death toll of 96,318, and pace of growth of fatalities, remains below those of the United States, Britain and Brazil. India on Tuesday reported its smallest rise in deaths since Aug. 3, continuing a recent easing trend that has baffled experts.

In Europe, which accounts for nearly 25% of deaths, the WHO has warned of a worrying spread in western Europe just weeks away from the winter flu season.

The WHO has also warned the pandemic still needs major control interventions amid rising cases in Latin America, where many countries have started to resume normal life.

Much of Asia, the first region affected by the pandemic, is experiencing a relative lull after emerging from a second wave. South Korea pleaded for people to stay at home ahead of the autumn thanksgiving holiday of Chuseok, which begins on Wednesday, but millions are still expected to travel across the country.

The high number of deaths has led to changes burial rites around the world, with morgues and funeral businesses overwhelmed and loved ones often barred from bidding farewell in person.

In Israel, the custom of washing the bodies of Muslim deceased is not permitted, and instead of being shrouded in cloth, they must be wrapped in a plastic body bag. The Jewish tradition of Shiva where people go to the home of mourning relatives for seven days has also been disrupted.

In Italy, Catholics have been buried without funerals or a blessing from a priest, while in Iraq former militiamen dropped their guns to dig graves at a specially created cemetery and learned how to conduct both Christian and Muslim burials.

In some parts of Indonesia, bereaved families have barged into hospitals to claim bodies, fearing their relatives might not be given a proper burial.

An indigenous group in the Ecuadorean Amazon took two police officers and a state official hostage, demanding authorities return the body of a community leader for a traditional burial.

The United States, Indonesia, Bolivia, South Africa and Yemen have all had to locate new burial sites as cemeteries fill up.