South Africa’s stars behind the bar 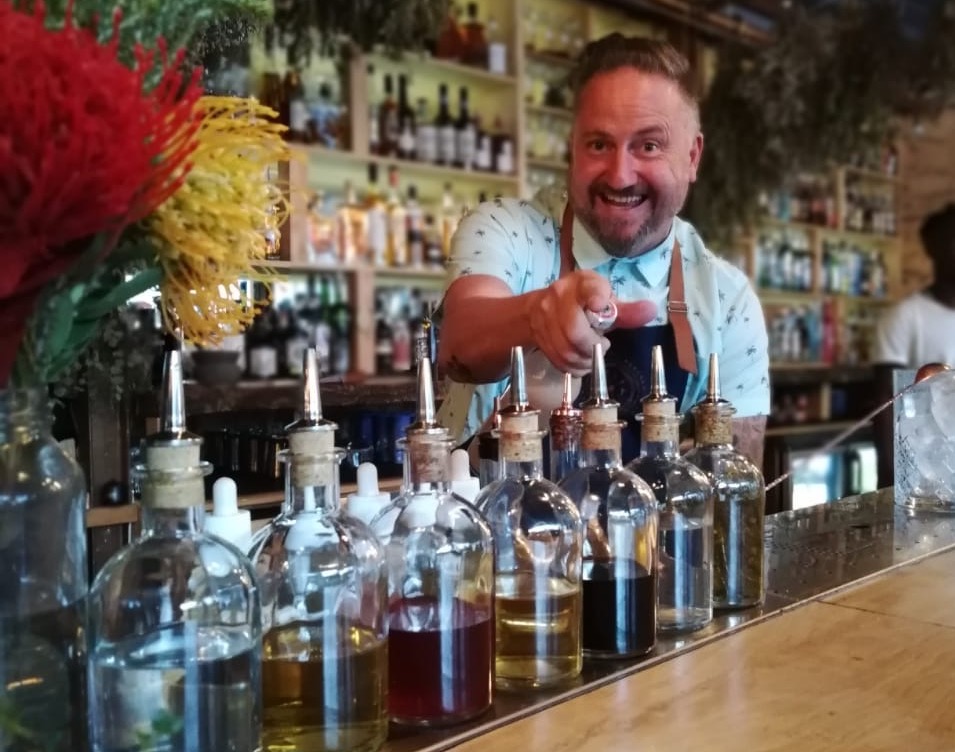 Meet the local legends who are raising the bar in the global drinks industry.

These words are among the opening lines of this year’s Bar World 100, and they couldn’t be truer for the global drinks industry, brought to its knees by the pandemic and having to rethink much of its methodology.

So what is Bar World 100, and why is it important? Well, it’s an annual catalogue of extraordinary people created by Drinks International, a British magazine that covers the global spirit, wine and beer markets … the same publication responsible for other seminal awards like the International Spirits Challenge.

The individuals in question are considered to be the 100 most influential figures in the drinks industry, from around the world. In the 2020 edition – the second ever – two trailblazers are flying the flag for South Africa: Stephanie Simbo and Kurt Schlechter. Indeed, they’re the only two candidates representing the entire continent.

In her debut, Simbo long jumped her way onto the list, planting herself at number 17, while Schlechter – an OG in the industry – leapfrogged 36 places from his 2019 position to seize 46.

Simbo, a French national, secured her spot largely due to her work at Beyond Bars Akademia, a hospitality school she set up in 2017 in Cape Town specifically to help rehabilitate formerly incarcerated women, offering them an alternative to a relapse into crime. However, Simbo is also a Wine & Spirit Education Trust trainer, Tales of the Cocktail Academy co-chair, cocktail-book author and former bartender.

Unfortunately, with the pandemic under way, Simbo’s academy is on ice indefinitely, and she’s currently acting as the global brand manager for Plantation Rum, based out of Paris.

As for Schlechter, there aren’t many roles he hasn’t played during his 28 years in the industry, from mobile bar operator to bar trainer, spirits consultant, spirit developer, competitive bartender and cocktail judge. (Somewhere along the line he penned a cocktail book as well.) At present Schlechter is the global guru of Cape brandy, acting as our unofficial ambassador worldwide, and the owner of Cause Effect Cocktail Kitchen in Cape Town, voted SA’s best cocktail bar in 2019.

Schlechter’s overall claim to fame though – what has given rise to his moniker of “King Kurt” and what likely cinched his spot on the list again – is his unwavering focus on inspiring and uplifting the bartender community. This via his creative genius at his own bar, but also due to his travels throughout Africa with the Bar Stars Academy, through which he educates budding bartenders.

So what does it mean for Africa to be represented on the global drinks stage, and why is it significant?

Says Simbo: “Representation matters. At every level. Africa is a vibrant continent with multiple talents and yet has not been recognised as such in our industry … it is long overdue. How can you call yourself global, or even inclusive, if you deny access to the table to an entire continent?”

“Africa has a large hospitality industry and there are many young people who are investing their future in [it]. We hope this helps to motivate them, as our aim is the upliftment of African hospitality and the people working within it,” adds Schlechter.

Naturally, Simbo and Schlechter are both proud to be named among the best – and to help clear the path for future movers and shakers – but it also shines a light on how far we still have to go.

“I feel honoured … However, I also feel alienated. Being one of only two [African representatives] on the list makes me realise the unbalance in our industry. I have met so many talented individuals on the continent who also deserve their spot. Being African should not be THE main cause for celebration … but rather just a detail. It is your work that should be acknowledged,” explains Simbo.

“South Africa’s cocktail scene is strong, with countries like Ghana, Kenya and Nigeria also starting to make great strides. It’s great to receive recognition for my passion; there are so many talented drinks figures in the industry [that] I can count myself lucky to be nominated by my peers,” says Schlechter.

Booze is big business in South Africa. According to SALBA (South African Liquor Brand Owners Association), the industry creates employment for more than one million people in South Africa, contributes 3% to our GDP and adds a whopping R51-billion to the economy via VAT, customs and excise revenue.

Bartender (and general drinks-related) education is very much brand sponsored, via masterclasses, competitions and so on. The more we excel globally, the more brand support we can solicit – a point that Simbo notes.

“I am immensely proud to see South Africa being more and more featured and represented on the global cocktail scene despite less support from brands … It pushed us to find creative ways to ‘hold up’, to think outside the box, and to show that genius can be found everywhere.

“Now that the spotlight is on us … it is important for us to have real conversations with brands so that the level of investment when it comes to education, activations or even new products matches the [support] we have globally.”

Voting was done by 102 industry insiders from 60 cities around the globe, those areas with larger bar landscapes getting two or three panellists and those with smaller scenes getting one.

Panellists were asked to nominate 10 bar personalities that they thought were most influential, and who were effecting positive change. They could cast a maximum of five votes for individuals from their country of residence; as such, at least half of their votes had to be for international nominees. DM/TGIFood