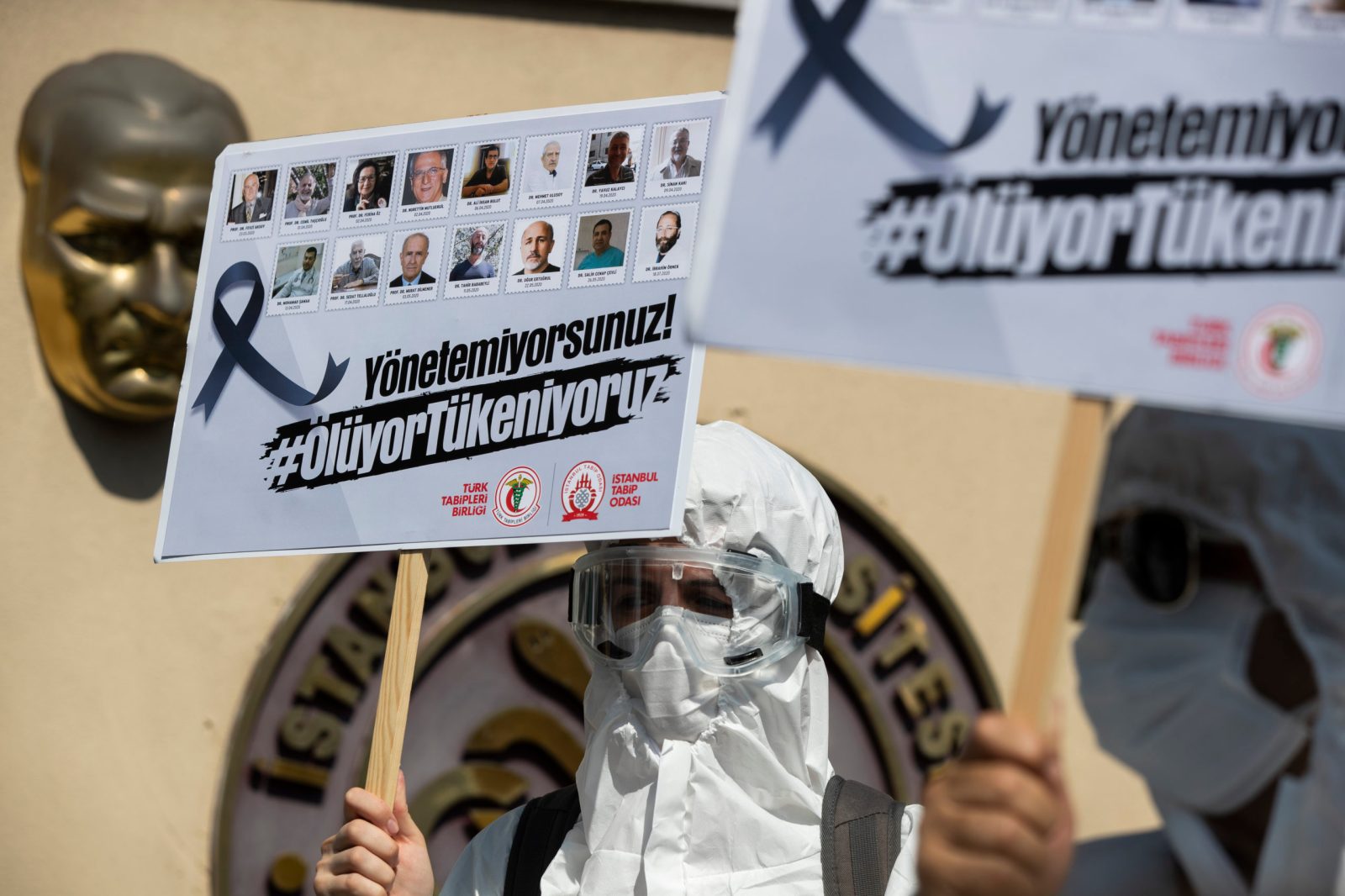 epa08670146 Turkish doctors wearing Personal Protective Eqiupment (PPE) hold placards reading 'you cannot manage, we are exhausted, we die' during a protest against the government in front of the Istanbul Faculty of Medicine, in Istanbul, Turkey, 15 September 2020. A group of doctors gather to draw attention to the deaths caused by Covid-19 and the increasing number of patients, and to give respect to the memory of the citizens and healthcare workers who died during the pandemic. EPA-EFE/TOLGA BOZOGLU

ISTANBUL, Sept 19 (Reuters) - Resurgent coronavirus cases in Turkey are fuelling tensions between doctors who say the official figures underplay the scale of the outbreak and politicians who accuse the country's medical association of undermining efforts to contain it.

More than 1,600 new cases and 60 deaths from COVID-19 are now reported daily, well off peak levels in April but rising steadily, with average numbers of deaths now three times the rates recorded between June and August.

Doctors across Turkey wore black ribbons this week to commemorate colleagues who have died, part of protests which also included a social media campaign with a message for the government: “You can’t manage it; we are exhausted”.

Many doctors question the official COVID-19 numbers, saying that although they don’t have their own independent nationwide data, the scale of cases they see at a local level does not tally with the bigger picture presented by the government.

“The numbers of just one city, or the numbers unveiled by just one or two medical chambers are almost equal to the (official) numbers for the whole country,” doctor Halis Yerlikaya told Reuters at a hospital in the southeastern province of Diyarbakir.

“This process is not handled transparently,” said Yerlikaya, who is a member of the medics association’s central committee.

Wearing a black ribbon on his white medical coat, he said doctors wanted to highlight the challenges and risks they faced. “We have tried to convey the voice of our colleagues who caught COVID-19, who are fighting for their lives in hospitals… Therefore we kicked off these protests.”

The doctors’ campaign prompted a blunt rebuke from President Tayyip Erdogan’s parliamentary ally, who accused them of treachery and called for the medics association to be shut down.

“The Turkish Medics Association is as dangerous as coronavirus and is disseminating threats,” tweeted Devlet Bahceli of the Nationalist Movement Party, whose alliance with Erdogan’s AK Party sustains the president’s parliamentary majority.

“The Medics Association which carries the word ‘Turkish’ in its name should immediately and without delay be shut down.”

Health Minister Fahrettin Koca has dismissed the association’s criticism of COVID-19 data, saying he has repeatedly highlighted the threat posed by the growing numbers and has not played down the challenges facing hospitals.

“I say the situation is troublesome. I say the number of critical cases rose 100% compared to last month,” he told journalists on Wednesday. “I unveiled the number of deaths which is 4.5 times more than last month.

“But there is absolutely no mistake in the chart that we have released … in terms of the burden on healthcare.”