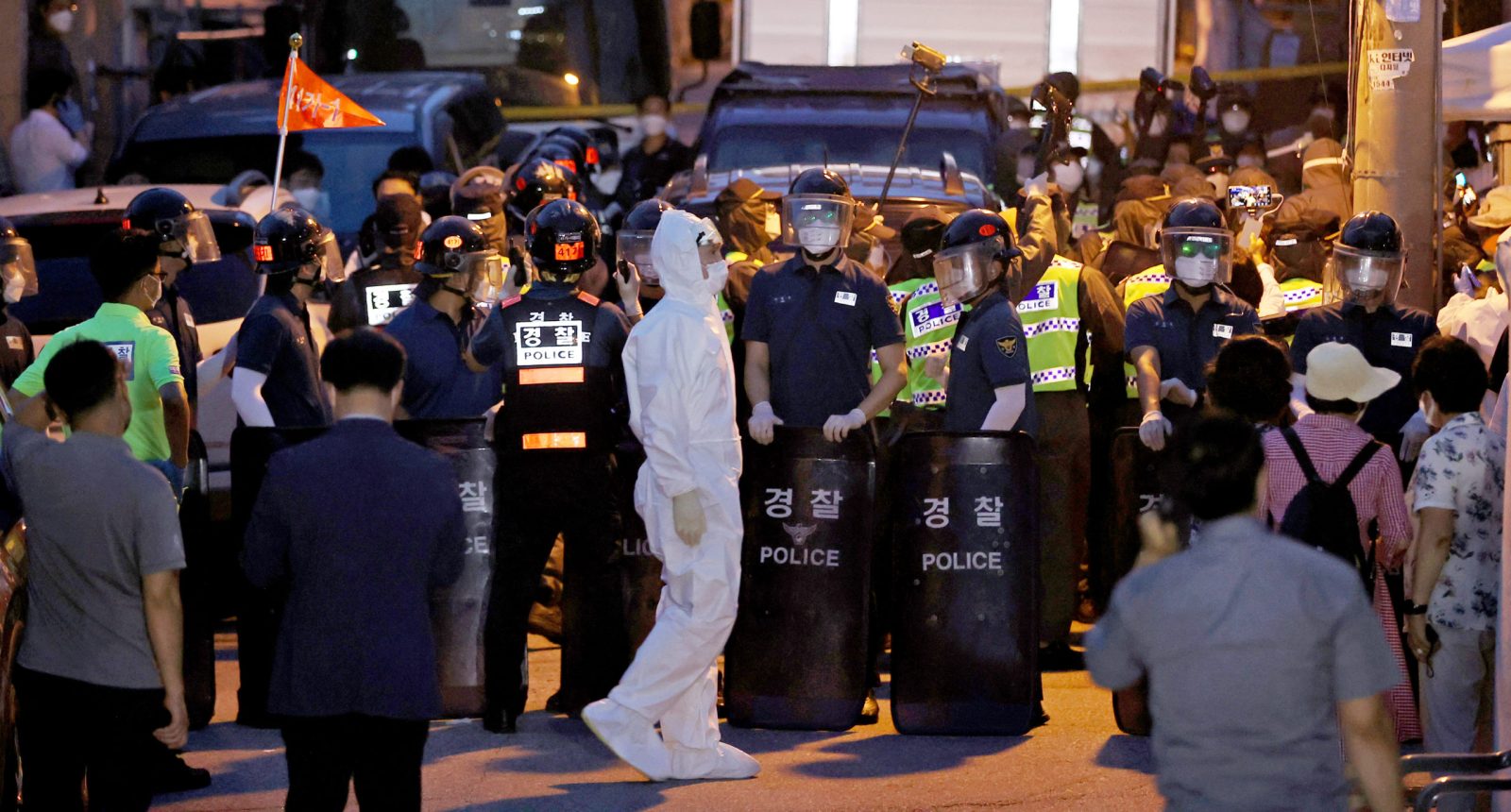 epa08614581 Police stand guard in front of Sarang Jeil Church in Seoul, South Korea, 20 Augus 2020, as its members protest during the government's epidemiological survey. A total of 676 coronavirus cases linked to the church have been confirmed as of noon. EPA-EFE/YONHAP SOUTH KOREA OUT

SEOUL, Sept 18 (Reuters) - The metropolitan government in South Korea's capital Seoul said on Friday it would seek 4.6 billion won ($4 million) in damages against a church for causing the spread of the coronavirus by disrupting tracing and testing efforts.

A fresh wave of infections erupted at a church whose members attended a large protest in downtown Seoul in mid-August, becoming the country’s largest cluster in the greater capital area. The outbreak has driven triple-digit increases in daily COVID-19 cases for more than a month.

The Seoul city government said it will file a lawsuit against the Sarang Jeil Church and its leader, Rev. Jun Kwang-hoon, accusing them of disrupting coronavirus tests and providing inaccurate lists of its members which it said aggravated the latest epidemic.

“The city is seeking to hold the church and the pastor responsible for contributing to the nationwide re-spread of COVID-19 by refusing and hindering epidemiological surveys or aiding and abetting such acts, as well as submitting false materials,” it said in a statement.

Calls to the church seeking comment went unanswered. Jun, a harsh critic of the government, was re-imprisoned early this month for attending the Aug. 15 rally in violation of his bail in April, when he participated in an illegal political protest ahead the parliamentary election and was indicted on charges of breaking election laws.

The cluster has inflicted government losses totalling at least 13.1 billion won ($11.3 million), including 4.6 billion won on Seoul, the city said.

The National Health Insurance Service has also said it will sue the church for indemnity worth 5.5 billion won ($4.7 million).

The Korea Disease Control and Prevention Agency reported 126 new cases as of midnight Thursday, which brought the total infections to 22,783, with 377 deaths.

The numbers, which peaked at 441, have steadily fallen to the low 100s after the government imposed unprecedented social distancing curbs late last month.

But authorities remained on high alert ahead of a major traditional holiday next week when usually tens of millions of Koreans travel across the country, urging restraint on trips and gatherings.

“The holiday period will be a pivotal moment in our anti-virus campaign,” said Yoon Tae-ho, director-general for public health policy at the health ministry.