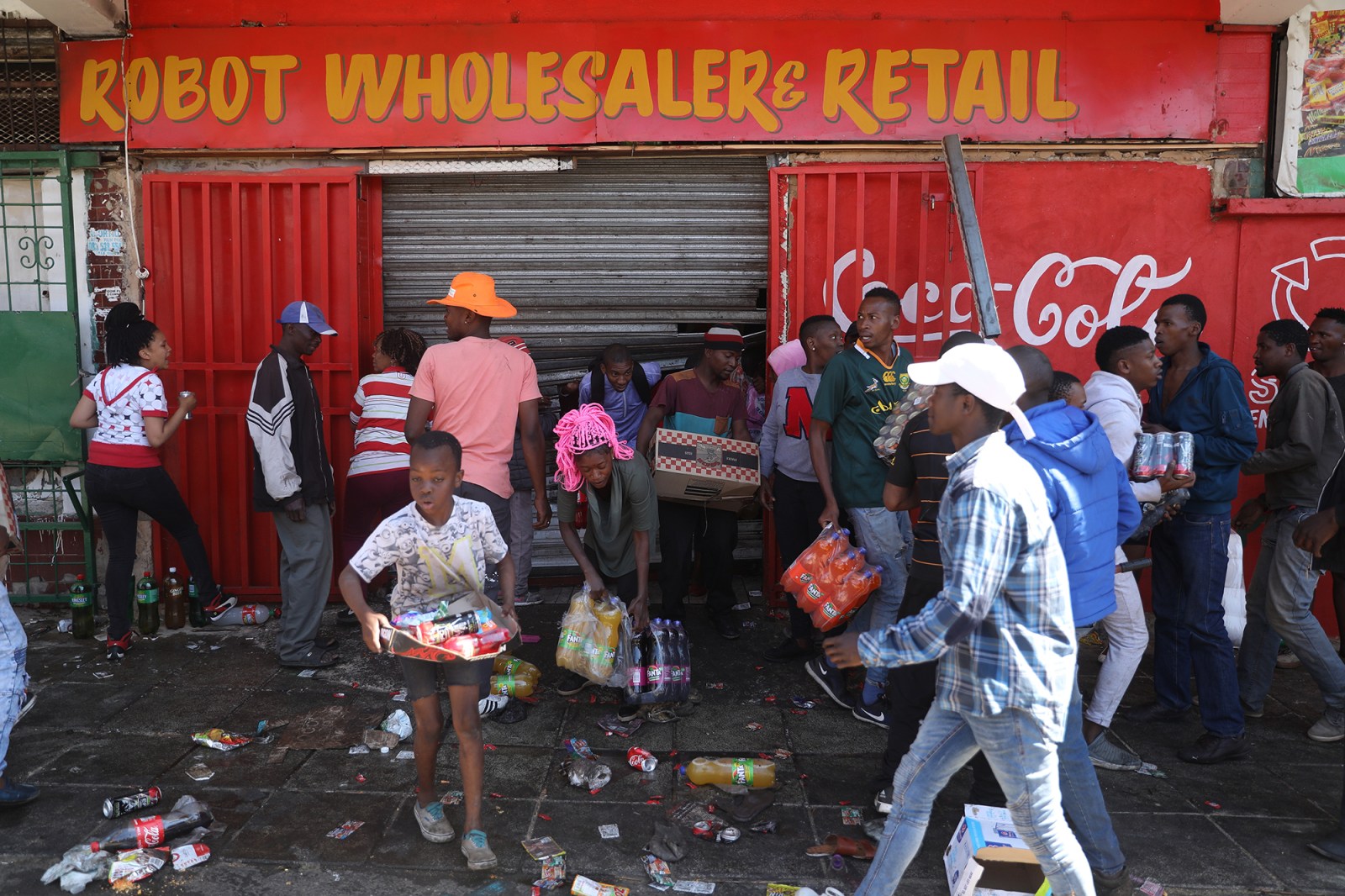 Looting in Turffontein during violence directed at foreign nationals that broke out in Johannesburg. Photo Thulani Mbele. 02/09/2019

A Human Rights Watch report on xenophobic violence in South Africa shows attacks against black and Asian foreign nationals continued unabated despite the government launching an action plan in March 2019 to combat racism and xenophobia.

“Syed” (his name has been changed to protect his identity), a Bangladeshi who owns a shop in Johannesburg, had his business looted during a wave of xenophobic attacks in September 2019. More than 1,000 shops owned by Bangladeshis were looted, he said, by mobs of approximately 300-500 people. Syed called the SAPS but it took three days before they arrived, leaving Syed and fellow shop owners without protection as mobs threw stones and other objects at them while they stood guard over their businesses.

Syed’s narrative is one of countless tales of violence against foreign nationals in South Africa. His account is featured in a Human Rights Watch (HRW) report titled “They Have Robbed Me of My Life” Xenophobic Violence Against Non-Nationals in South Africa, launched on Thursday 17 September during a virtual panel discussion.

Written by Kristi Ueda, a research fellow at HRW, the report is based on 51 interviews mainly with survivors of xenophobic violence in the Western Cape, Gauteng, and KwaZulu-Natal (xenophobia hotspots) between March 2019 and March 2020, following the launch of the National Action Plan to Combat Racism, Racial Discrimination, Xenophobia and Related Intolerance (NAP).

While the report focuses on the period between 2019 and 2020, South Africa has seen numerous flare ups of large-scale xenophobic violence since 2008.

“We found that despite the launch of this national action plan, little has changed in terms of xenophobic violence and challenges facing non-nationals,” said Ueda.

Some of the report’s key findings were:

HRW found that the police have used counterfeit goods raids as a cover for xenophobic harassment and attacks. Victims told the group that they had been disproportionately targeted. Sometimes their shops were destroyed and shop owners beaten and tear gassed.

“The government claims that counterfeit goods raids protect the local economy and South African jobs, but sellers told Human Rights Watch that the police have sold confiscated goods back to them after ransacking their shops in Johannesburg Central Business District and Diepsloot,” the report read.

Joburg vendors vs police: When a system wears the badge of the law but lacks moral authority

Comments tweeted by Gauteng Premier David Makhura during counterfeit goods raids in the Johannesburg CBD on 7 August 2019 were cited as contributing to an ‘us-versus-them’ narrative:

“We are cleaning up our [Central Business District]. We will not rest until we take our City back,” tweeted Makhura at the time.

We are cleaning up our CBD. We will not rest until we take our City back. We are sending a very strong message to all those who think they can occupy our buildings illegally #OkaeMolao pic.twitter.com/rePCjjPJ7z

If it’s not xenophobia, then what is it?

According to HRW, documentation raids have also lead to arrests of documented and undocumented non-nationals. Ueda said some interviewees had their valid documents ripped up during these operations.

“We spoke to two brothers who were beaten and detained besides showing valid documents. They were held in a police cell where there was no room to sit because of how many non-nationals were squeezed into this one cell.” She says the two were only given two slices of bread and water daily.

‘There will be fire and blood’

A wave of xenophobic violence in 2019 began when WhatsApp messages went viral threatening “fire and blood” if foreigners didn’t leave the country. According to HRW, figures from the government claimed 12 people died in the onslaught, 10 of whom were South African, but the group’s research found that at least 18 non-nationals were killed between 2 and 9 September in the attacks.

Using social media to spur xenophobic attacks is nothing new. Digital forensic investigations have found online networks in South Africa promoting dangerous xenophobic attitudes, such as a Twitter account called @uLerato_pillay. The account has close to 60,000 followers and is linked to a Twitter campaign called #PutSouthAfricaFirst. Masked as patriotism, the campaign is promoting xenophobic sentiments by blaming foreign nationals for crime, unemployment and a burdened healthcare system.

Scapegoating tactics and xenophobic rhetoric by politicians have led to pre-election violence in the past. As South Africa prepares for local government elections in 2021, this is a cause for concern.

The NAP has a five-year implementation period from 2019 to 2024 which aims to ensure non-nationals’ constitutional rights are upheld, to strengthen policies against racism and xenophobic violence and to remove barriers to integration (such as documentation) for refugees and asylum seekers in South Africa.

As the report indicates, not all of the NAP’s actions and objectives included time-frames, but of those that did, a number that were meant to begin within the first year have not yet started. These include conducting a study on the levels of xenophobia in SA, creating an effective governance structure to provide oversight on the NAP’s implementation, securing funding for the NAP’s implementation, developing data collection of disaggregated statistical data for the measurement of racism, racial discrimination, xenophobia, and related intolerance; and role delegation for key stakeholders to promote the plan’s implementation.

HRW put forth a number of recommendations to the Presidency, government departments and municipal authorities, including the prioritisation and rapid implementation of the NAP.

“With little to no access to justice, the path toward accountability for xenophobia, and therefore bringing an end to it, remains uncertain,” the report read. DM