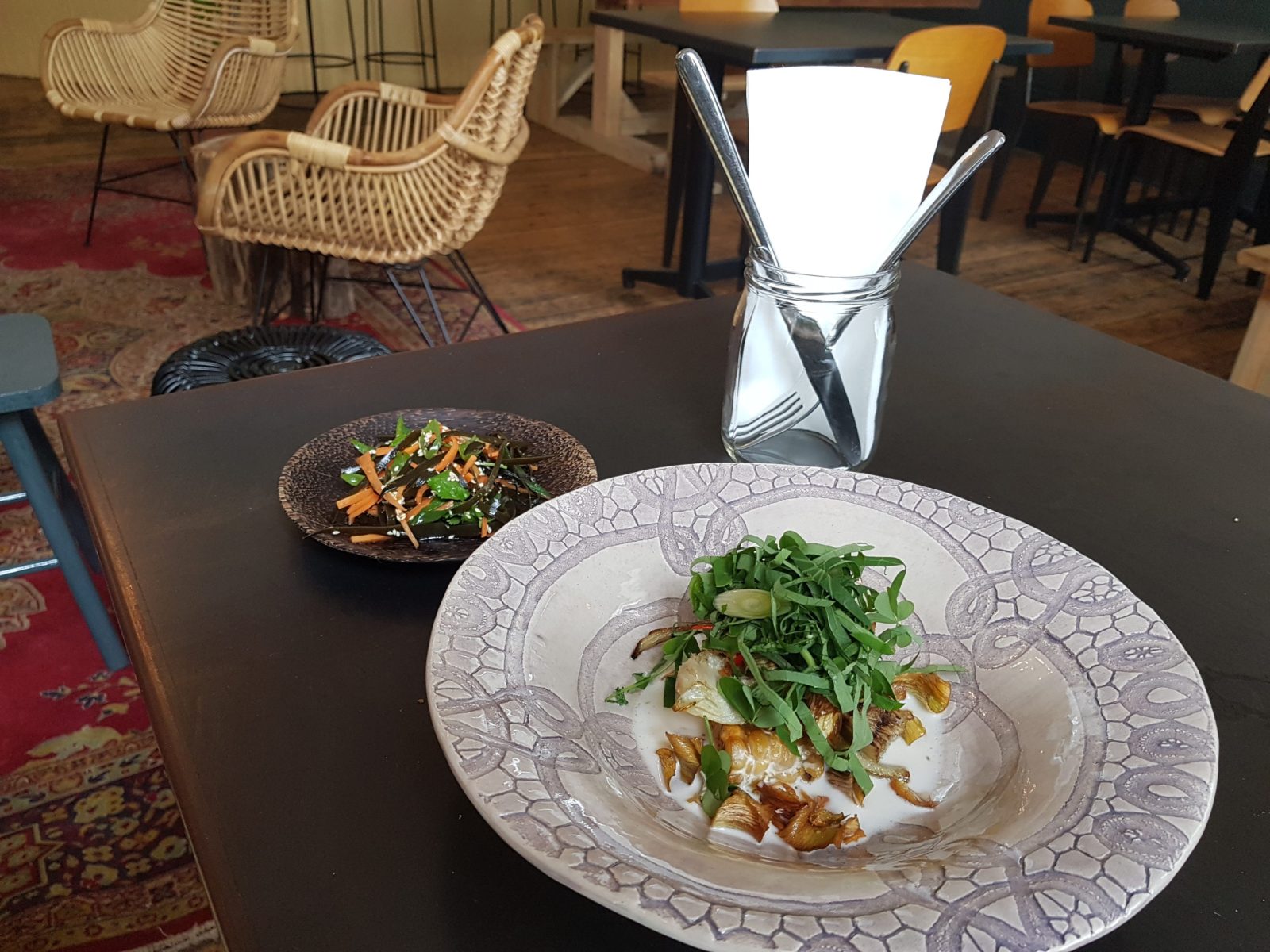 Vegan tempeh with pickled artichoke, topped with nasturtium and oxalis leaves, with a coconut and lime dressing. Seaweed and carrot salad on the side. (Photo: Kim Maxwell)

Oxalis Eatery opened to inner city Cape Town on a rainy Friday at the end of August, on a shoestring budget, a wish and probably a few unspoken prayers.

The witty truth about a name seems rather apt for a restaurant that grew out of lockdown: “Oxalis is an indigenous plant and a resilient one, which we thought we could all relate to right now”. Edible oxalis is also known as wood sorrel, and the leaves are in a number of savoury dishes at the 64A Wale Street pop-up.

I’ve been trying to pinpoint why I smile whenever I think about the team behind Oxalis. Talented, positive and collectively determined to make a go of it, they acted decisively on hearing in August that they would all be retrenched at Cape Town restaurant Janse & Co. Former colleagues Liezl Odendaal, Jade Konz, Lisa Knipe and Yoraya Nydoo registered a company. Their pop-up eatery opened two weeks later.

It’s tempting to wallow in despair about how severely the hospitality industry and its suppliers have been impacted. So I smile because Oxalis is an uplifting nod towards collective creativity and goodwill, of individuals grabbing opportunities where others see obstacles. As Odendaal told me a few days before opening: “Working together and supporting each other has never been more important.” A spirit of ubuntu still seeps through South Africa. That’s what I came away thinking about after my first Oxalis Eatery weekday lunch.

What we want to be

“When we all started discussing what kind of restaurant we wanted to be, we said we want somebody to come in every week and not be bored,” explains Jade Konz, bringing warmth to the front of house. “So it’s a menu where you can bring your vegan and gluten-free friends, and find something for those who like meat – we had a wagyu burger this first week.”

A space to drink a glass of wine with a few creative snacks, or pop over from an office for a light lunch. “Instead of focusing on international guests, it’s become important to speak to a local market. It’s what we look for when we go out to places,” she adds.

Chef Knipe describes herself as a kitchen all-rounder. “Where I worked before, it was about celebrating the ingredient in all its glory. I might have had access to four or five different types of aubergine.” Thriftiness is required now. A tiny kitchen also means a pared-down menu for practical reasons. “Now we’re working with small farmers and a community gardening programme. Besides benefiting from better pricing, we want to support people making a difference in our city. We’re not looking to import anything.

“Our menu has dishes that take a bit of skill, but are simple and delicious, and the ingredients won’t break the bank. We want to appeal to people in the times we’re in – nobody is looking for a 14-course meal where you have to save up,” says Knipe. “We want it to be affordable to try four or five things on our menu. We’ll change it often so hopefully you’ll come back and keep trying.”

Two small blackboards offer four or five options apiece of Snacks or Plates. One or two dishes switch regularly. Prices range from R60 – R130. “We feel that in the current economic state, people don’t have as much spending power as before, so we’d like to offer something accessible to everyone,” says Odendaal.

The Snacks are particularly creative and tasty. Sharing means you’ll be able to try more of them. I loved the rooibok tartare in creamy garlic aioli, with oxalis leaves and a crumbled tumble of seeds that reminded me of a savoury granola bar. Cauliflower florets marinated in kimchi paste and fried in a crust of mieliepap delivered umami notes, with a sweetish lime and coriander leaf dressing drizzled over. Then freshness itself in a broad bean, pickled red onion and dune spinach salad, partnering snoek croquettes dipped into creamy chipotle aioli.

The Plates menu includes more protein-based options, such as prawns and venison chorizo in tomato smoked chilli sauce. I tried a vegan fried tempeh cake topped with grilled pickled artichoke and crisped leaves. Topped with fresh nasturtium and oxalis leaves, it offered plainer, comforting flavours, served with a coconut and lime dressing. A side order was fun: a seaweed, carrot and bladder kelp salad all slippery-slidey in its oily dressing, with spring onion and sesame seeds for crunch. (Odendaal was collecting seaweed in Kommetjie, one time I called her.)

It was the only dessert during opening week, but I would have ordered pastry chef Odendaal’s Basque-style cheesecake even if there was a choice. It’s baked at a high temperature really fast, leaving the centre still moist and soft. On my plate, a citrus confit spilled syrupy deliciousness, with caramelised white chocolate and crunchy brandy snaps against the cheesecake’s creamy wobbliness. Oxalis has since added a 70% chocolate mousse, with assorted cookie crumbs and a dollop of caramel sauce.

As a business, the women have skirted the system in clever ways. For instance, restaurant liquor licence approval usually involves a protracted wait. “We sub-let our space from The Gin Bar, so we trade in alcohol using their licence. As a pop-up it also helps us reduce our operating costs,” says Odendaal. Oxalis serves one or two cocktails, delicious fruit and floral cordials, beers and a handful of wines. Serious wine lovers will find it lacking. But Nydoo, who oversees alcoholic drinks and an appealing playlist, says the wines will grow with their operational budget in time.

Being located upstairs adjacent to The Gin Bar and above Honest Chocolate means that as tenants they are collaborating on opening times and in other ways. So, on First Thursday the Oxalis crayfish and aioli rolls went down a treat, while sophisticated cocktails were poured at The Gin Bar. With Sundays popular for courtyard visitors seeking hot beverages and brownies at Honest Chocolate, Oxalis is trying out Sunday hot breakfasts and brunches one floor up. Oxalis has no coffee machine, so Honest Chocolate services diners’ hot beverage orders.

Offering a casual, welcoming atmosphere, while keeping staff roles and the space flexible. It’s a topic the women touch on repeatedly. “We’re a small team so we can all do most things, which is great,” says Odendaal. “This lockdown has taught us we should all be a bit more multifunctional in our restaurant roles.

“If you think of people’s habits going out, spending money … Oxalis Eatery is a concept we all think will work. If it doesn’t, we can adjust it.”

So far, Oxalis take-home products include jars of foraged mushroom relish, green figs, roasted red pepper and chilli sauce, or a green jalapeno and spring onion sauce. The plan is to increase these extra income sources. Says Odendaal: “We started a company that can eventually grow into something different – a deli, small superette, a bakery … We want to survive in this space for the next seven months.”

The team are throwing ideas about for extras in their space – perhaps pop-ups for designers selling fashion or second-hand thrift. The walls exhibit Mark Rautenbach’s butterfly-themed art. Industry friend Julia Hattingh had his work displayed at Reverie Social Table, so the Oxalis team approached the artist to help cover up “a lot of wall”. Near his works, he’s used eye-catching twine in yellow, green and charcoal to emulate cocoons.

The wicker furniture and a few hanging lamps were purchased. Plants green the well ventilated space. It’s a good fit with the cheery Oxalis branding created by Nydoo’s graphic designer boyfriend Werner Goss-Ross in a yellow (oxalis flower), green (its stem and leaves) and charcoal colour scheme. “We found this app, you take an image and put it through, to come up with your colour scheme,” Nydoo explains. She discusses her music preferences for soul and afrofunk. The team painted the charcoal grey skirting themselves. “We all pitched in. It was a lot of fun, and such a fast journey. We really wanted to create a space where people felt life and community again and a vibe.”

Nydoo is 28; Odendaal the oldest of the team at 35. “From dealing with change, we’ve come up with amazing ideas. We all love a challenge. We don’t like being stagnant either,” says Nydoo of the collective fit. “So many people have told us they can see a comfortable energy about us. We’re doing something for ourselves.” DM/TGIFood