Nomvula Mokonyane sinks under weight of contradictions at Zondo commission 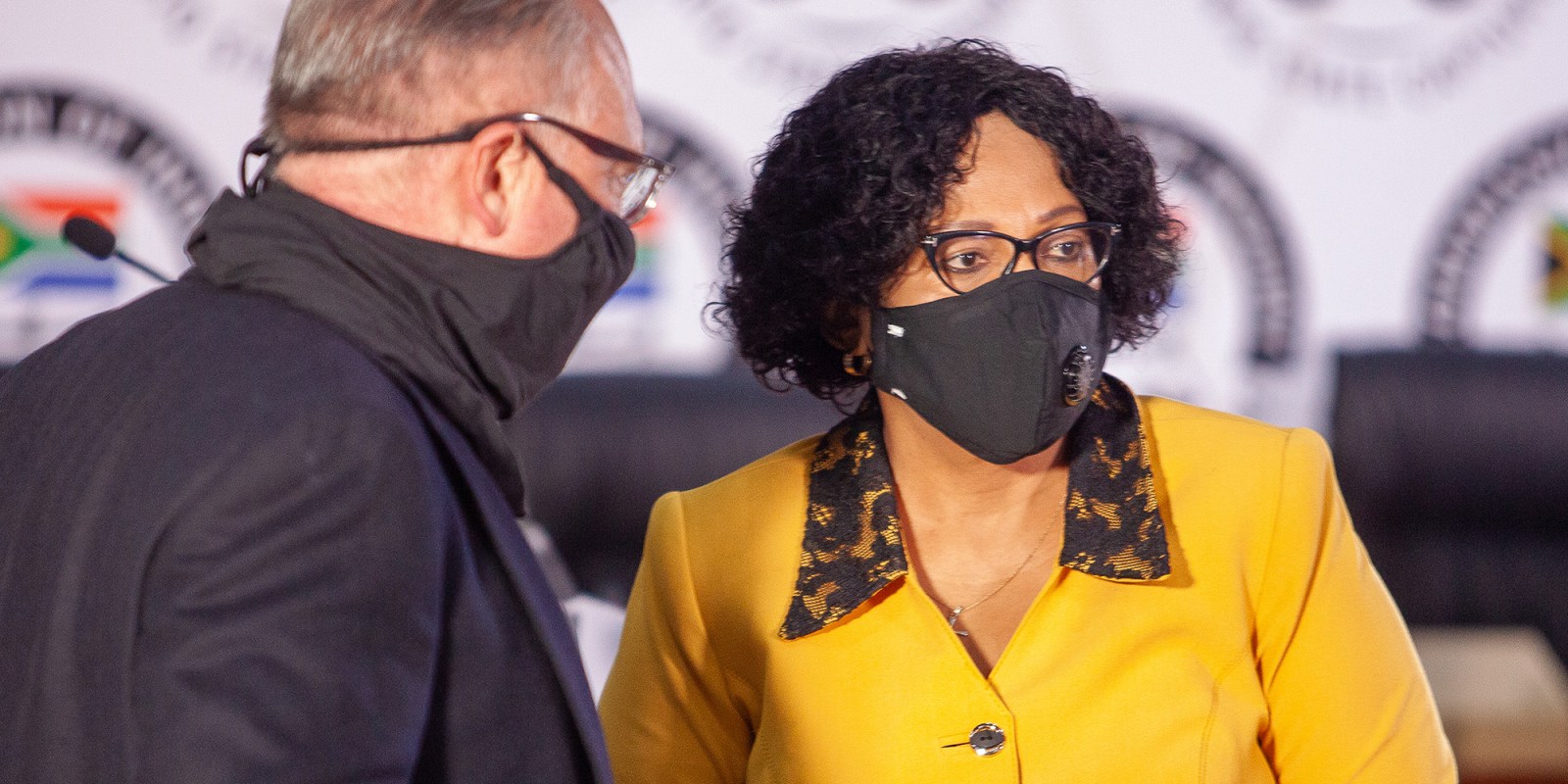 The former minister of water and sanitation, Nomvula Mokonyane, sank under the weight of evidence and contradictory statements as she reappeared before the Zondo commission on Thursday to answer the allegations of former Bosasa chief operating officer Angelo Agrizzi.

Nomvula Mokonyane, who ascended from MEC of safety and security in Gauteng, to premier in the province, to minister of water and sanitation, then minister of communications, and finally, minister of environmental affairs before being deployed to ANC headquarters at Luthuli House in 2019, made her second appearance at the Zondo Commission of Inquiry into Allegations of State Capture on Thursday.

Mokonyane first testified before the commission on 20 July and denied she had received R50,000 a month from Bosasa as alleged by the company’s former chief operating officer, Angelo Agrizzi, or that she had ever issued instructions or asked for maintenance or security work at her home to be done by Bosasa or subcontractors to the company.

She also denied that she had an extravagant 50th birthday party at the Victorian Guest House in Krugersdorp paid for by Bosasa, as alleged by Agrizzi.

Under questioning by advocate Viwe Notshe, she denied ever having a birthday party at the guest house, which is close to her home. The transcript of this testimony from 20 July was read out by Notshe as he led evidence on Thursday.

But on 25 August, the owner of the Victorian Guest House, Frederick Coetzee, gave evidence before the commission, stating he had catered for 174 guests at his establishment for Mokonyane’s 40th birthday party, themed as a “break a leg” party.

This prompted Mokonyane to submit an affidavit to the commission clarifying that her 50th birthday party was not held there, but it was the venue for her 40th birthday party in 2003, which was a surprise party she had not been told about beforehand.

In Thursday’s testimony, she said she submitted her affidavit as the media publicity following Coetzee’s testimony jogged her memory of her 40th birthday party being held there.

However, she said she did not know who paid for it, did not see Agrizzi or Watson there, nor was there any Bosasa branding or anyone from Bosasa on the list of speakers.

While Mokonyane has admitted to having a long-standing friendship with Watson, who supported the ANC, she said she had “no personal relationship” with Agrizzi.

Under sustained questioning from both Notshe and Zondo, who found it “strange” that she would not have remembered a surprise party of such magnitude, nor be curious about who paid for it, Mokonyane said she knew her husband, Serge, had not paid for it.

“We both know we didn’t pay, because we didn’t organise it,” said Mokonyane.

Zondo then pointed out that in her affidavit in response to Coetzee, she stated she assumed her husband had paid for the party.

Zondo read from Mokonyane’s affidavit: “My late husband was a successful businessman who could afford to pay for such an event, I always assumed he had in fact done so.”

Regarding Agrizzi’s testimony that meat and liquor worth thousands of rand were delivered to her house annually at Christmas time, which was corroborated by Mokonyane’s personal assistant, Sandra Thomas, Zondo took Mokonyane to task over her assertion that the food and drink were for distribution to needy families in Kagiso.

Zondo said his impression was that this was not the sort of thing provided to needy families. He would have expected more basic foodstuffs such as rice, cooking oil and sugar.

Mokonyane said Bosasa was just one contributor to the Christmas largesse for the community, and there were others who provided more basic necessities.

“You don’t choose what they [donors] give,” she said, and claimed that overnight, volunteers would pack the goods into parcels for distribution.

She also denied the Christmas packs were delivered to her house every year, except for “one or two” occasions when the Kagiso community hall was undergoing renovations, which meant the packages could not be delivered there.

Thomas had testified that most years the goods were delivered to Mokonyane’s house and put in the garage; however, Thomas had also stated the goods were meant for distribution to needy families in Kagiso.

Agrizzi’s allegations that security systems, including CCTV cameras at Mokonyane’s house, were installed and paid for by Bosasa, were also raised. Mokonyane has stated the security systems were provided by the provincial government while she was in their employ.

Notshe produced a letter from the national Department of Public Works, which had been received during the tea break, stating the provincial departments reported that they did not install security features at her house.

Mokonyane had previously stated, and restated, that as far as she knew, the provincial government took care of security at her house while she was MEC and premier, but once she was employed at national level, it was her responsibility to obtain the services of a private company.

However, she could not dispute assertions that Bosasa had installed security features at her house. As Notshe pressed the point, Zondo intervened, saying: “From a legal point of view, she can’t dispute it.”

Notshe then raised the issue of Mokonyane’s Aston Martin luxury car, which she received as a 50th birthday present and which cost over R3-million. At the time she was earning R143,000 a month as Gauteng premier, and Notshe said it seemed she had been living beyond her means.

Mokonyane said that at the time, her now late husband, Serge, was entering into a scrap metal business deal with Eskom and Denel, and the R2.2-million deposit on the car was provided by long-time friends as part of a deal in which they would be invited as partners into the business should the “Eskom deal” be successful.

She said the deal, which has yet to transpire, is being contested in court.

At the start of Thursday’s hearings, Mokonyane’s legal counsel, advocate Laurence Hodes, SC, said each time Mokonyane testified, there was a subsequent character assassination in the media and leaks of affidavits to journalists. Additionally, her computer IP address had been hacked on 29 and 30 August.

Thus, Hodes said, Mokonyane sought finality regarding her appearance at the commission, which was also a health risk to her as there was the danger of Covid-19 exposure, which was especially serious as she suffered from comorbidities.

He said he would submit an application, in terms of the rules, to cross-examine Agrizzi.

He said the commission was considering its options apart from laying criminal charges against the “one or two, maybe three” newspapers who published leaks.

“It’s a matter we are very concerned about,” said Zondo.

The commission continues on Friday and will hear Bosasa-related evidence from the former chairperson of the Parliamentary Portfolio Committee on Correctional Services, Vincent Smith. DM