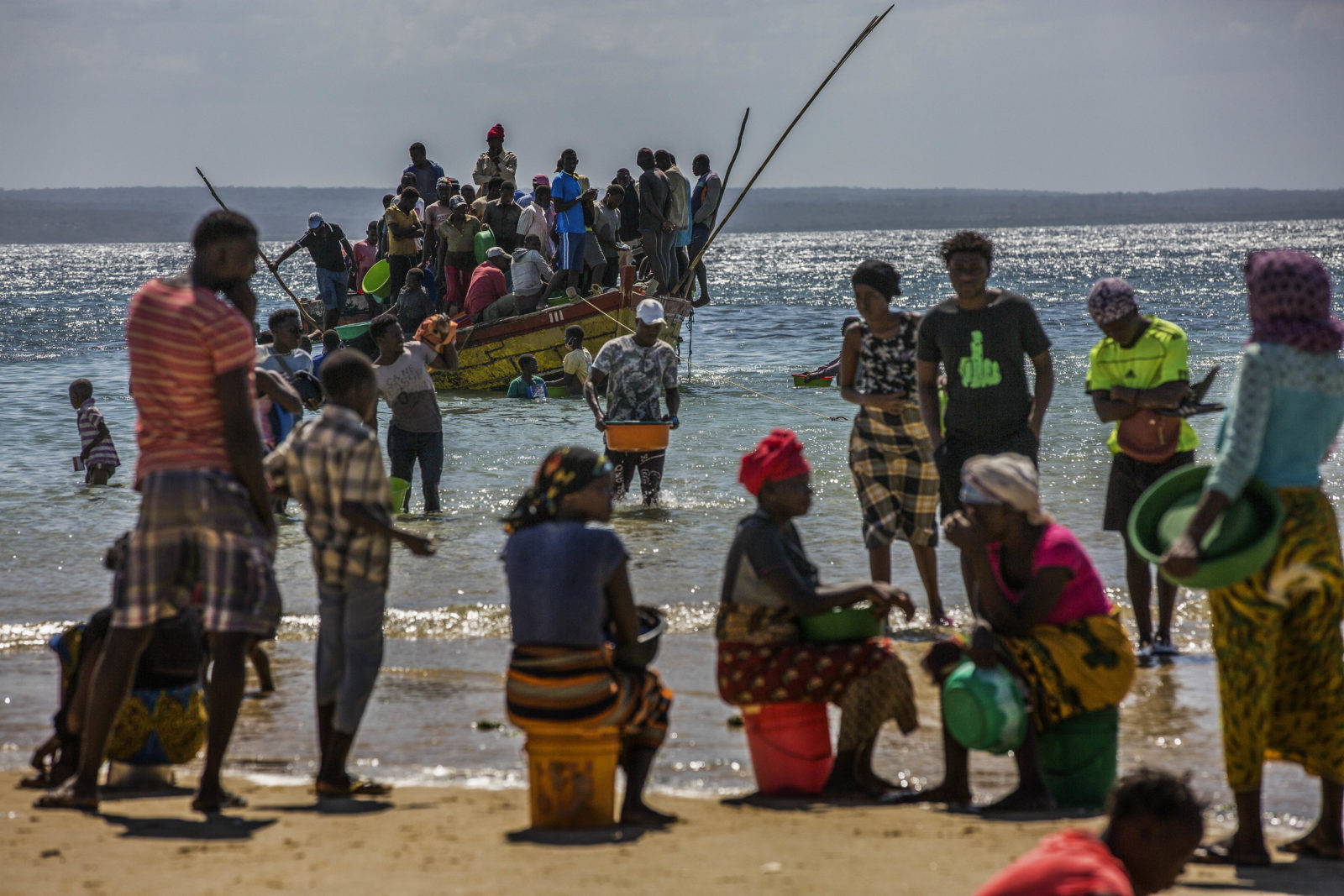 Passengers and cargo board a boat from a fishermen's beach that has become one of the main arrival points for displaced persons fleeing from armed violence raging in the province of Cabo Delgado, in the Paquitequete district of Pemba, northern Mozambique, 21 July 2020. EPA-EFE/RICARDO FRANCO

It is a sobering thought for Mozambique and Southern Africa as a whole that, at time of writing, a growing insurgent army with links to Islamic State remains in control of Mocimboa da Praia in Mozambique’s northern Cabo Delgado province.

The commercially and strategically important port, about 70 kilometres from the border with Tanzania, was captured by a force of as many as 1 000 fighters on August 11.

This victory was important as it was here that the insurgency really began on October 5, 2017, when a ragtag group of about 30 fighters armed with AK-47s attacked the police station and other government buildings, killing two police officers and several civilians before withdrawing.

The fall of the town earlier – while a major victory for the insurgents – was a heavy blow for Mozambique as the port is the state’s main source of resupply for its war effort in the north of Cabo Delgado. The town is a major logistics hub for the liquified natural gas projects further north at Afungi near the coastal town of Palma.

Since the first attack on Mocimboa da Praia in 2017, the group – which has been called Ahlu Sunnah Wal- Jamaa (ASWJ) or colloquially “Al-Shabaab” – has grown into a formidable army of up to 1 000 fighters armed with weapons stolen from Mozambican security forces.

The genesis and evolution of the group remains something of a mystery. Most analysts agree it was originally a domestic phenomenon and remains largely rooted in Cabo Delgado and influenced by Islamist extremists from further up Africa’s east coast, through Tanzania, Kenya and even to Somalia.

About 18% of Mozambique’s population is Muslim and Cabo Delgado has the largest concentration, mainly on the coast. As the original Al-Shabaab (which means “youth” in Arabic) in Somalia split from the mainstream Islamic Courts Union (ICU) as a radical splinter group of disenchanted younger members, so the Mozambique version seems to have broken away from Mozambique’s officially-recognised Islamic Council.

There were many points of contention, ranging from Ahlu-Sunnah-Wal-Jamaa/Al Shabaab’s fundamentalist/Wahabist objection to co-educational schooling, to their objection that the Islamic Council was too Indian, to a sense of socio-economic exclusion of lower-class Muslims, say scholars like Liazzat Bonate from the University of the West Indies, an expert on Mozambican Islam.

Bonate noted in October 2017 that in Cabo Delgado, the lands and the seashore where people traditionally fished were being occupied by business conglomerates, and local informal miners were being forcibly prevented from extracting valuable minerals such as rubies – probably because the ruling Frelimo party had a commercial interest in the minerals.

Analysts believe this sense of exclusion has been exacerbated by the discovery of immense natural gas reserves in Cabo Delgado’s Rovuma basin, and a conviction by locals that they will not see the benefits of this bonanza.

After initial attacks on government forces, ASWJ gradually took on a barbarous new character with a surge of attacks on civilians in which many were maimed or beheaded with machetes. The motivations for these tactics were unclear although it seemed as though the group was beginning to borrow some of the signature features of Islamic State which has become notorious for its beheadings in Iraq and Syria.

Around June 2019, the insurgents began flying the sinister black and white Islamic State flag and IS began taking public credit for attacks – which as ASWJ/Al-Shabaab, the insurgents had never done.

The group has grown in the size of its army, its arsenal and the number and boldness of attacks. From three armed attacks in 2017, 19 in 2018 and 34 in 2019, there were 43 attacks in just the first four months of 2020. The group has so far conducted 617 attacks causing 1842 deaths, according to Theunis Marais of Rhula Intelligent Solutions, a Mozambique-based risk management company.

And the attacks have grown bigger and moved further south in Cabo Delgado. This year the insurgents captured three district capitals, including the important one of Quissanga late in March.

Government security forces seem to have inadvertently contributed to ASWJ’s recruitment drive by brutalising innocent civilians in reaction to attacks. Insurgents, when entering Mocimboa da Praia in June this year, were treated by many inhabitants as liberators and Robin Hood-like as they handed out cash and products looted from local banks and shops.

The number and size of their weapons has also grown, mainly by plundering from the army – particularly in a raid on the Mbau military base on January 23 when they left with eight truckloads of arms, according to Marais.

For a long time, the Mozambican government insisted on treating the insurgents as mere criminal “bandits” and responded accordingly. But as the size of the threat grew, they were forced to take it more seriously. In September/October 2019 the shadowy Russian private military company Wagner – reportedly closely linked to President Vladimir Putin and acting as a proxy army for the Russian state – arrived in Cabo Delgado with a force, possibly of around 200 men and three attack helicopters. They did not seem to adapt well to the harsh African conditions and withdrew a few months later after suffering quite heavy casualties.

In April 2020, Maputo hired the South African private security/military company Dyck Advisory Group (DAG), run by former Zimbabwean military officer Lionel Dyck. DAG has had some success in shooting the insurgents from the air with small aircraft but has suffered from a lack of coordination with Mozambique ground troops, resulting in several “friendly fire” incidents and civilian casualties, Marais says.

The French and US natural gas companies have also stepped up their security protection, even though insurgents have so far not deliberately targeted the industry.

Marais believes the insurgents are still consolidating their strength and could still focus attacks on the gas industry in the future.

In May, the South African government revealed that it was talking to Maputo about what help it could provide. There are also unconfirmed reports that SA forces might already be engaged in training Mozambican soldiers.

The Southern African Development Community (SADC) has also taken notice. A summit of its defence and security organ in May committed the organisation to help Mozambique, though neither there nor at a full SADC summit on August 17, 2020, were any concrete commitments made.

Mozambique President Filipe Nyusi seemed to be in denial, saying the summit had focused on “preventing and combating cross-border crime, with an emphasis on terrorism”, as though the insurgency was essentially a foreign phenomenon.

Other countries in the region see the cross-border threat going the other way – a spillover of Islamic terrorists onto their territory. Already it seems the Cabo Delgado insurgency has inspired IS sympathisers to join the fighters in Mozambique.

The immediate danger is to the commercial exploitation of Cabo Delgado’s huge LNG reserves which are expected to be the salvation of the Mozambican economy.

Marais believes the insurgents have not directly targeted the gas industry for strategic reasons, wanting to consolidate their strength before embarking on action that could provoke a major backlash from international forces defending the international companies which hold the gas concessions, mainly the US and France.

What will happen next?  Jasmine Opperman, an expert at the Armed Conflict Location & Event Data Project (ACLED), says that Mozambique troops are massing around Mocimboa da Praia, preparing to recapture the town.

But even if they succeed, the insurgents will almost certainly attack again – there or elsewhere, as they have demonstrated their growing power to cause major disruptions in the province seemingly at will.

As the Institute for Security Studies has pointed out, the SADC Mutual Defence Pact obliges other member states to come to the rescue of a country under attack. But whether SADC as a whole or any individual members have the political will, the courage and the means to do so remains to be seen. DM