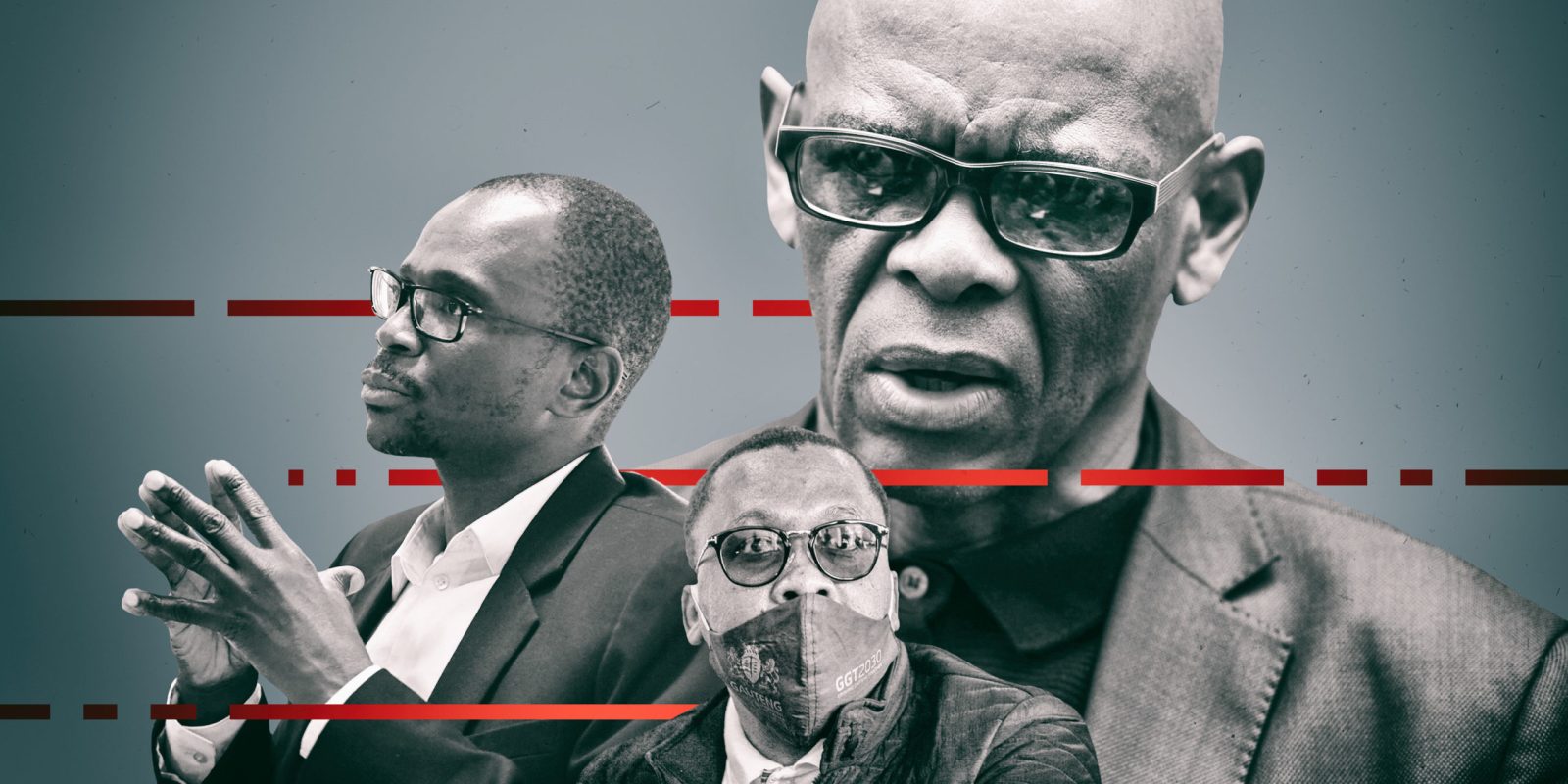 Former president and ANC grandee Kgalema Motlanthe will be asked to head a Council of Elders investigation into corruption in the ANC if the NEC is not satisfied with this weekend’s progress. Ace Magashule strikes a fiery pose as meeting starts

If the special executive committee meeting to deal with corruption in government and the ANC this weekend (28 to 30 August) is not satisfied with steps led by secretary-general Ace Magashule, a Council of Elders will be convened to do the job.

Daily Maverick has been told by the clean-up camp of the NEC that former president Kgalema Motlanthe might be drafted in to head the anti-graft campaign.

Early reports out of the meeting which started on Friday (28 August) said that Magashule was in a fiery mood. He reportedly said that temporary suspensions of cadres who faced criminal charges would not happen and that he would not stand aside (the Integrity Commission has requested a meeting with him). Magashule is taking the fight to President Cyril Ramaphosa this weekend and his supporters are likely to raise many probity questions about the ANC president too.

In addition, former President Jacob Zuma fired off a 12-page response to Ramaphosa’s seven-page letter which he (Zuma) called “fundamentally flawed” in its assertion that the ANC now stood as Number 1 accused for corruption.

As a signal of the seriousness of the meeting convened by Ramaphosa, former eThekwini mayor Zandile Gumede was sworn out as a provincial MP on Friday 28 August, after being sworn in earlier in the month. The party’s KwaZulu-Natal leadership requested her to step down and when she didn’t, she was sworn out.

The party’s deputy provincial chairperson Mike Mabuyakhulu was also asked to step aside. Both leaders face criminal charges related to alleged fraud and corruption. Stepping aside is a paid and temporary leave of absence.

In his seven-page letter on Sunday 23 August, Ramaphosa set Magashule and the Luthuli House HQ a list of tasks:

*all cadres named in corruption (in court, at the Zondo commission of inquiry into state capture and other forensic or investigative inquiries, or in significant media reports) were to be listed and to report themselves to the Integrity Commission;

*those without acceptable explanations should voluntarily step down or be summarily suspended (likely what happened to Gumede);

*to develop a system of lifestyle audits for all ANC leaders and public representatives and declaration of financial interests;

*to develop a policy on ANC leaders and family members doing business with government;

*start the process of strengthening the Integrity Commission;

The graphic illustrations show the men and women who have a tough weekend task that is read as a make-or-break for the governing ANC. While there are no recent polls to show its support levels, two officials who spoke on condition of anonymity say the party is concerned that it could lose the next election. The public mood has soured against the ANC after a series of revelations of how cadres turned PPE procurement into a feast. “The ANC is in the last-chance saloon,” said a Luthuli House staffer. 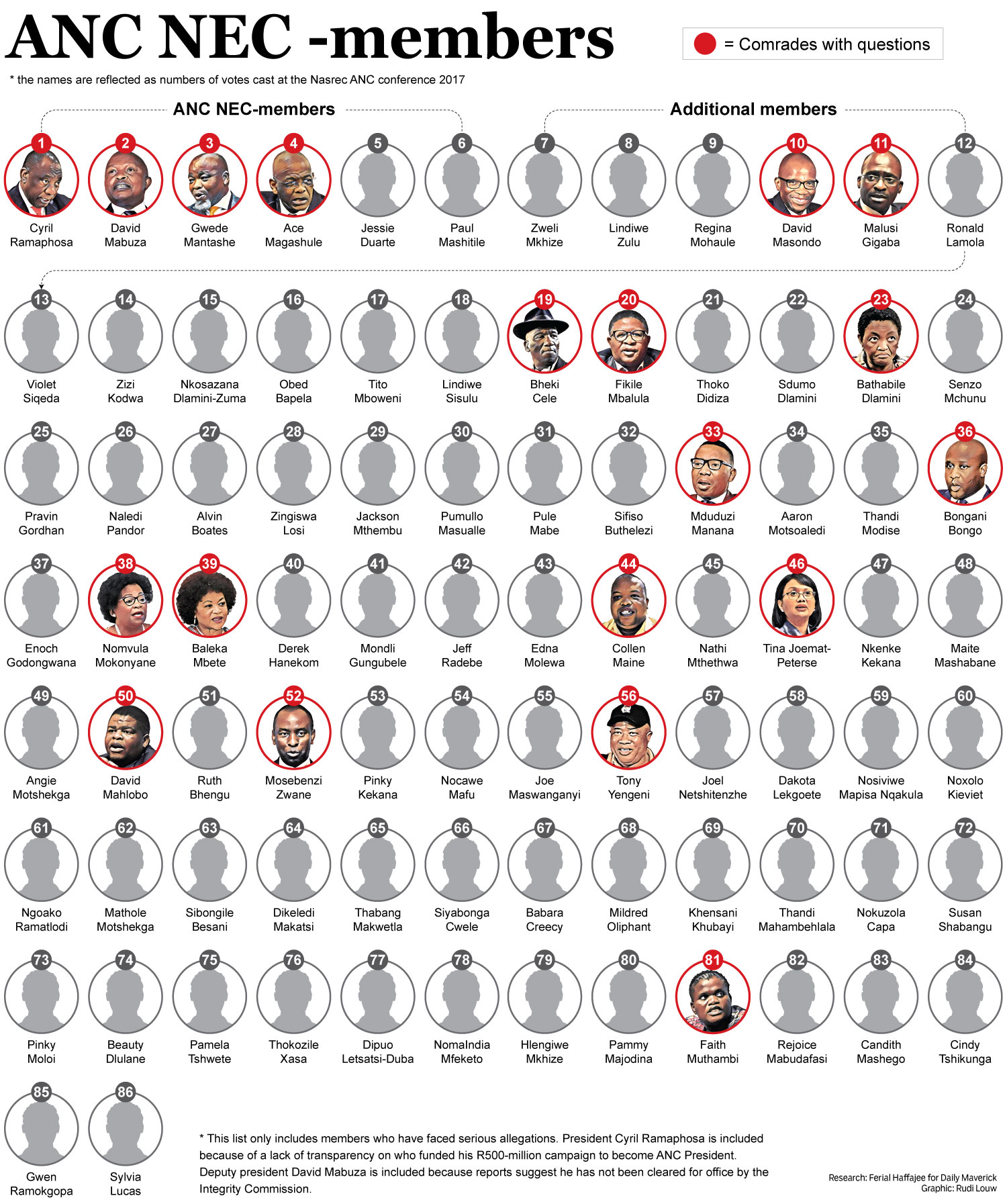 The leaders highlighted in the image are likely to face questions during the ANC meeting as they have been named in major accounts of corruption facing the party. Several have come up in sworn evidence at the Zondo Commission of Inquiry into State Capture while President Cyril Ramaphosa is likely to face questions about the funding of his campaign to become ANC president.

An ANC official said there were many members of the NEC who were uncomfortable with the lack of transparency on how Ramaphosa’s bid for ANC president had been funded to the tune of half a billion Rand.

“Raising so much money for an election means that only the wealthy will be able to lead the ANC. The President will be asked about the R500-million,” said the official.

Deputy president David Mabuza is reported by City Press to have not been cleared by the Integrity Commission prior to being sworn in.

“Officials have to take the process seriously (the process is the ANC conference resolution on corruption which says leaders who face serious charges or have been criminally charged step aside; the ANC statement of 4 August and the president’s seven-page letter),” said an executive member.  The party’s top structure is likely to add to any package of anti-graft measures the officials present. “A weak package will be rejected and we will go back to an independent inquiry,” said the person.

Daily Maverick asked ANC spokesperson Pule Mabe for an update on progress which he promised from Wednesday August 26. We will add it as soon as he replies. DM