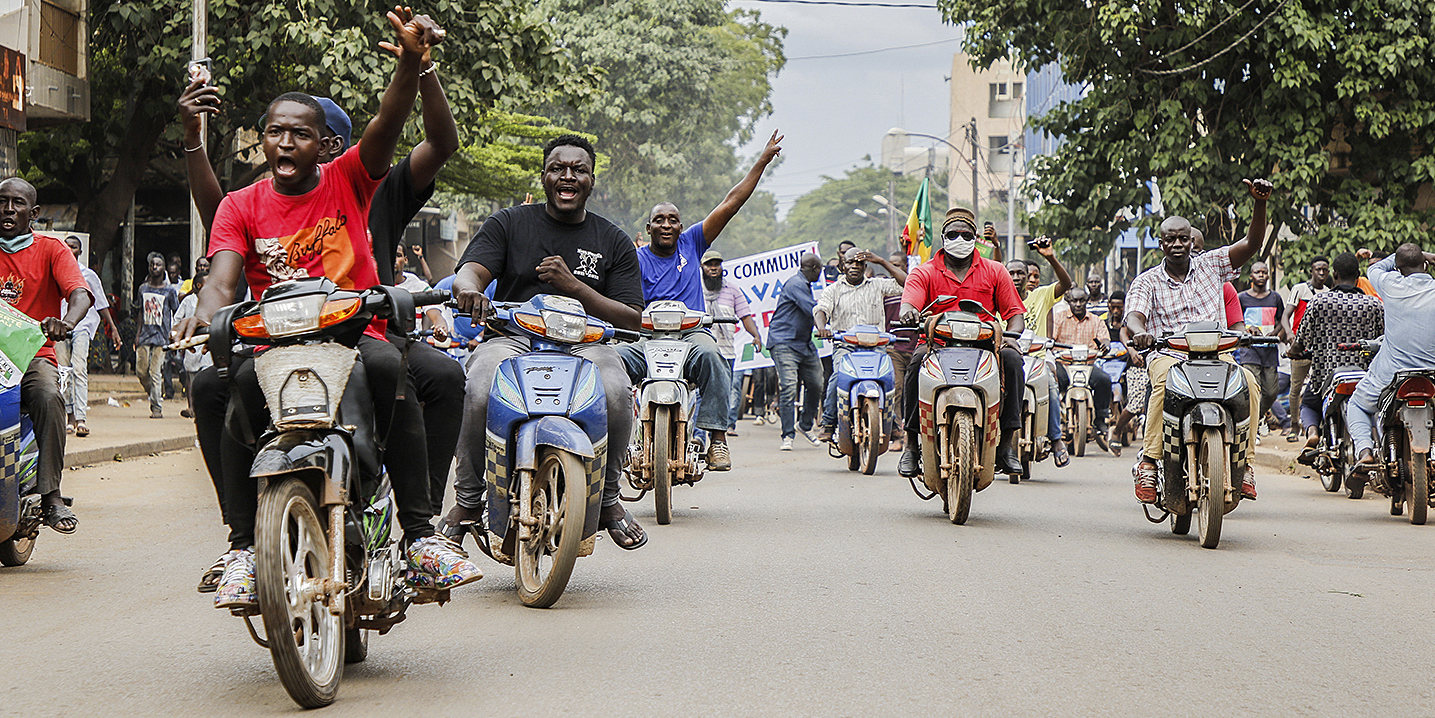 Malians react after Mali military entered the streets of Bamako, Mali, 18 August 2020. The reflex to regard these recent events in Mali as just another case of military abuse of power requiring principled condemnation misses the mark. (Photo: EPA-EFE/STR)

Despite the global outcry, could Mali’s military takeover be used to advance the aims and principles of democracy?

After months of public protests, a military uprising culminated in the arrest of Mali’s president Ibrahim Boubacar Keïta on 18 August 2020, compelling him to dissolve the National Assembly and resign as head of state. In the early hours of 19 August, five military officers sat at a table, announcing a transition on national television. A classic image of past African coup d’états.

The international community has strongly condemned the coup, with the Economic Community of West African States, among others, imposing sanctions on the country despite the risk of aggravating an already severe humanitarian situation.

These reactions predictably align with international norms and reflect the concern to avoid setting a dangerous precedent as West Africa enters a period of potentially highly-contested elections.

However, the reflex to regard these recent events in Mali as just another case of military abuse of power requiring principled condemnation misses the mark. Quick condemnations signal a lack of self-reflection and accountability by the international community, which missed several opportunities to defuse the crisis before the coup. This principle-based condemnation opposes Malians’ main aim of accessing more responsive, accountable and legitimate governance.

Arguably, political change by coup was a response to gross institutional dysfunction, persistent governmental inertia, and a fundamental breakdown of the social contract. This situation tested the resilience of Mali’s democracy and the patience of a disaffected population faced with acute conflict and social crises.

Loss of public trust in the country’s institutions culminated in the constitutional court’s reported tampering with parliamentary election results in April 2020. Malians were faced with the difficult task of choosing from options for political change in a context where democratic checks and balances were perceived as rigged, corrupt and dishonest.

Without condoning the coup, it’s important to see it as the result of a popular uprising against a failed democratic system in a stalemate. So what should come next?

The 18 August coup appears to have been methodically executed with little or no bloodshed, unlike typical putsches. Coup architects requested the president to dissolve parliament before resigning, which reflects a refined knowledge of constitutional law. They have to be politically innovative to craft a way forward.

They quickly announced their intention to roll out an inclusive transition, inviting social and political actors to create a new path for all Malians. They also reassured national and international communities of their commitment to key issues including the 2015 agreement for peace and reconciliation, and the continuity of Mali’s collaboration with foreign military partners in addressing terrorism.

This suggests that the coup, if accompanied by an inclusive and participatory sociopolitical framework, could allow Malians to put their social contract back on the table and agree on healthier governance standards.

But this potential can only be realised if the transition is used explicitly to facilitate a reset of democratic values and decades-long governance malpractice. To design a way out of the crisis, stakeholders’ focus must shift from issues of duration and leading personalities of the transition, to the purpose that this period should serve.

The transition should be gauged against a clear mandate that aligns with Malians’ expectations and should set the stage for the launch of long-overdue reforms in public service, economic governance, security governance and electoral administration. The length and modalities of the transition should be derived from this mandate, rather than the other way around.

Acknowledging that no substantial or durable change in governance systems will occur without true national ownership, the definition of transitional priorities should come from a national conversation, rather than be imposed by external partners.

Previous political dialogues (including Ouagadougou, Algiers, the 2017 National Entente Conference and the 2019 Inclusive National Dialogue) offer a clear diagnostic of what’s wrong, as a starting point. Further discussions should focus on sequencing priorities to address during the transition, to initiate necessary changes and make them irreversible.

Milestones could include structural electoral reforms, critical for creating the space for a renewal of the political elite and practices, rather than a redistribution of roles among old actors. This would support momentum for more than cosmetic change. To avoid conflicts of interest, coup and transitional leaders should be barred from seeking office in the next elections.

National processes for security sector reform and public service transformation shouldn’t be delayed, but rather start under the transition, to be continued later by elected authorities.

Whether the transition should be civilian- or military-led is for Malians to determine. If military, there should be guarantees to mitigate the risk of the security situation worsening while the military leadership is busy with political matters. The country’s recent history shows the tendency of violent extremist groups to exploit the opportunity of institutional vacuums or slowness to move their agenda forward.

To gauge the sincerity of the transition and ensure it remains on track to realise its potential for democratic empowerment, attentive monitoring of the socio-political climate is necessary at all stages, using key benchmarks. Civil liberties must be preserved, and exceptional regimes such as states of emergency avoided. Transition monitoring should also include public oversight of increases of wealth among transition actors.

Other points of attention should include the respect for the human rights of all during the transition period, including freedom of assembly, freedom of the press and the rights of dignitaries of the fallen regime to free and fair trials where applicable. All these elements should not only be captured in formal commitments by transition actors but also monitored by independent national and foreign entities until the end of the transition.

This might be what it takes for the 2020 coup to deliver more positive outcomes than previous ones: more accountability, irreversible reform processes, healthier governance practices, and increased and better deserved public trust in institutions. DM

Ornella Moderan is Head of the Sahel Programme, ISS Bamako.