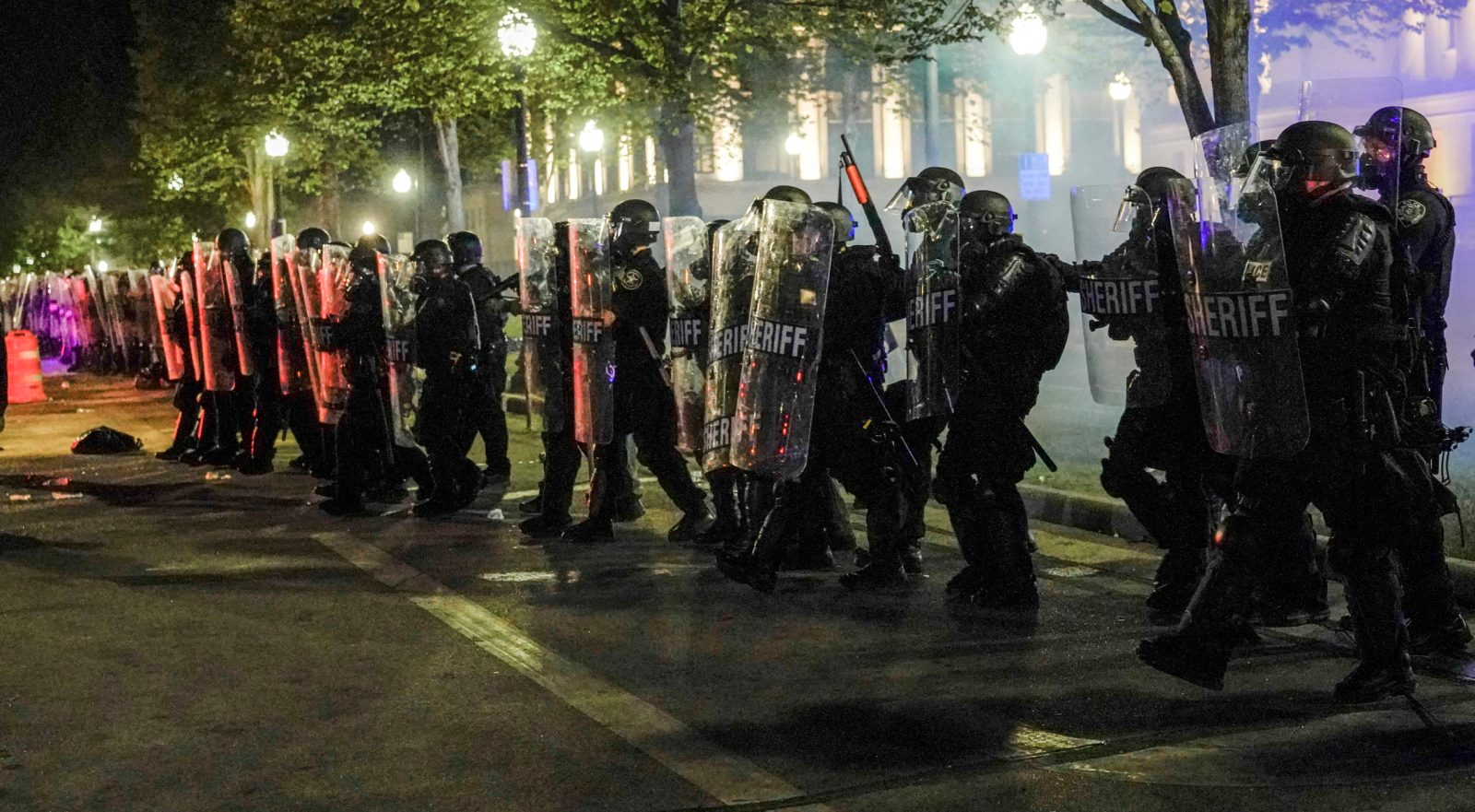 epa08626072 Kenosha County sheriff deputies move to clear a park of protestors during a third night of unrest in the wake of the shooting of Jacob Blake by police officers, in Kenosha, Wisconsin, USA, 25 August 2020. According to media reports Jacob Blake, a black man, was shot by a Kenosha police officer or officers responding to a domestic distubance call on 23 August, setting off protests and unrest. Blake was taken by air ambulance to a Milwaukee, Wisconsin hospital and protests started after a video of the incident was posted on social media. EPA-EFE/TANNEN MAURY

Social media videos showed chaotic scenes of people running and screaming amid a volley of gunfire and others tending to gunshot wounds. The bloodshed followed a night of skirmishes that had appeared to turn calm after police fired tear gas and rubber bullets at protesters who defied a curfew.

The shooting broke out shortly before midnight, killing two people and wounding a third who was expected to survive, the Kenosha Police Department said in a statement.

Crowds chased a man running down the street with a rifle after they believed he had shot another man. One pursuer took a flying kick at him after he fell to the ground. Another man tried to grab his weapon and appeared to be shot at close range, falling to the ground.

Another video showed a man who appeared to be shot in the head as several people rushed to his aid, frantically trying to tend to his wound and keep him alert.

Yet another video showed a man with a severe arm wound sitting on the ground and being aided by an armed man as police approached.

Kenosha has been rocked by protests since Sunday, when police shot Jacob Blake, 29, in the back at close range.

After struggling with police, Blake broke free and walked away from them and around his car to the driver’s side, where he was shot after opening the door, according to a bystander video that went viral. Three of his young sons were in the car, witnesses said.

Blake was hit by four of the seven shots fired and left paralyzed and “fighting for his life,” his family and lawyers said on Tuesday, hours before the latest round of civil unrest broke out in the lakefront town between Milwaukee and Chicago.

Anti-racism protesters also clashed with police in Portland, Oregon, and Louisville, Kentucky, on Tuesday night, part of a wave of national protests that have continued since the May 25 death of a Black man in Minneapolis, George Floyd, who was pinned to the street under the knee of a white police officer.

The Kenosha protests have drawn self-styled militias, patrolling the streets with rifles or standing guard outside businesses to protect them from looters or arsonists.

“They’re like a vigilante group,” Kenosha County Sheriff David Beth told the Milwaukee Journal Sentinel, though he said he was unsure if the man at the center of the outburst was linked to such a group.

Beth predicted the main suspect would be caught, telling the newspaper: “I feel very confident we’ll have him in a very short time.”

Kenosha police, a separate agency from the sheriff’s office, asked for witnesses to come forward.

Devin Scott, 19, told the Chicago Tribune he was in a group chanting “Black Lives Matter” when the gunfire began and that he tried unsuccessfully to revive one of the victims.

“This guy with this huge gun runs by us in the middle of the street and people are yelling, ‘He shot someone! He shot someone!’ And everyone is trying to fight the guy, chasing him, and then he started shooting again,” Scott said in the Tribune report.

Scott said he hit the ground during the next burst of gunfire, then tried to aid a person who was lying prone in the street.

“I was cradling him in my arms. I was trying to keep this kid alive and he wasn’t moving or nothing. He was just laying there,” Scott said. “I didn’t know what to do and then this woman starts performing CPR. There was no pulse. I don’t think he made it.” (Additional reporting by Daniel Trotta, Kanishka Singh and Ann Maria Shibu; Editing by Andrew Heavens and Nick Macfie)