Right of reply: Why the City of Cape Town’s actions are racist 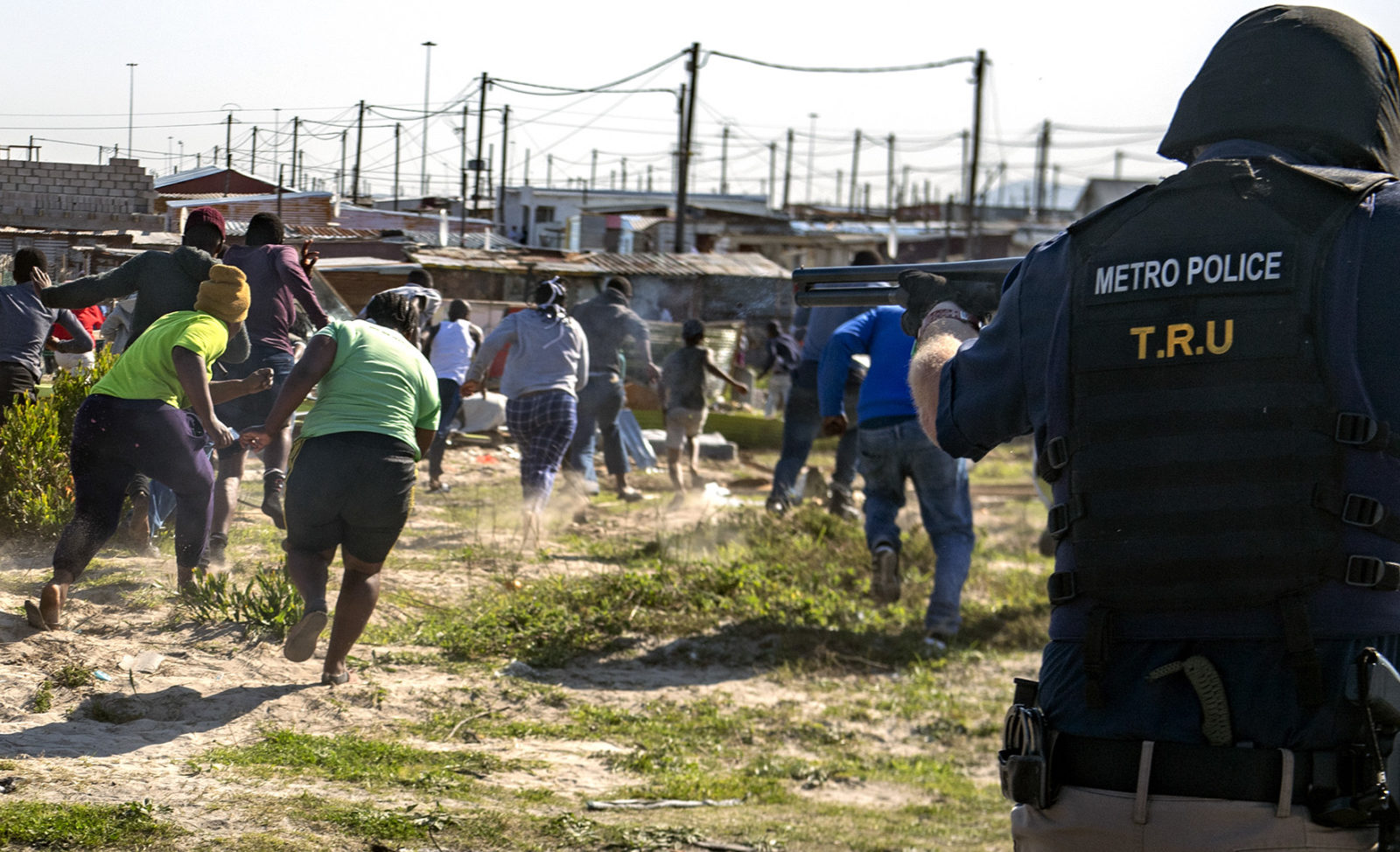 CAPE TOWN, SOUTH AFRICA - JULY 21: Members of the Metro Police clash with angry members of the Khayelitsha community on Baden Powell Drive over land invasions on July 21, 2020 in Cape Town, South Africa. It is reported that The City of Cape Town has been experiencing a recent spike in land grabs after the City’s Anti-Land Invasion Unit, accompanied by law enforcement officers demolished informal structures at eThembeni near Empolweni in Khayelitsha. (Photo by Gallo Images/Die Burger/Jaco Marais)

We do not seek to interdict the City from attempting to stop unlawful land occupation; rather, we seek a declaratory order that the City must be in possession of a court order … to carry out evictions or remove structures they claim are “unoccupied”. Whether a structure is occupied or not should be determined by a court of law, not by City officials who act as judge and jury on the matter.

In writing this, we are reminded of author Toni Morrison’s ruminations on racism. Morrison reminds us that racism is a distraction and takes away from the serious work that must be done, because, with racism, “there will always be one more thing” to refute, validate or dismiss.

Recently, that “one more thing” came in the form of statements made by senior members of the Cape Town city council regarding the Legal Resources Centre’s involvement in the matter between the South African Human Rights Commission (SAHRC) and Bulelani Qolani // City of Cape Town and others, which will be heard in the Western Cape High Court this week.

These statements sought to lump the LRC, our clients and the people who have had to occupy land, into one inscrutable mass – with unfathomable chutzpah – that exists to agitate for equality, while the City is merely concerned with making services available only to a certain demographic of people from specific race and class groups.

This is how racism functions: by denying each of us individual, discerning characteristics. It also functions by insisting on carrying out evictions and demolishing homes in the midst of a global health crisis, with disregard for the legal and constitutional protections against eviction, and without the provision of alternative accommodation for evictees.

Racism also presents itself in the manner in which the city’s homeless are rounded up and put in a camp with no regard for physical distancing and without the provision of medical care to the camp’s residents, as well as the over-policing within this settlement.

Indeed, when all these conditions become known and raise public ire, rightfully so, this same group of blighted souls is loaded into trucks and dropped off in various locations around the city, and left to fend for themselves.

There is racism also in refusing to issue Covid-19 trading permits – despite regulations in lockdown Level 4 permitting these – to the informal traders on the Grand Parade, as well as the disrespectful insistence that they are a “flea market”. However, the Oranjezicht flea market, an actual flea market, is not subject to such refusal of trading permits.

Finally, racism presents itself in the way in which Mayor Dan Plato can admonish the South African Police Service for their conduct in dispersing a largely white group of protesters from the hospitality industry, while justifying the equally excessive use of force by his own officials against homeless black people peacefully protesting in Khayelitsha.

With this assortment of cases of institutional racism perpetrated by the City of Cape Town, we at the LRC find ourselves having to retreat from our primary work of advancing human rights, to having to draw on our history and our work to show the invidious nature of the statements made against the LRC, even in the midst of legal documents that speak directly to the relief we seek in this matter.

The first of these statements was made by Mayoral Committee Member for Human Settlements, Malusi Booi, who labelled the LRC as “pro land invasion” and intimated that we were also a ‘third force’ involved in acts of sabotage that are “large-scale, well-planned, well-funded and orchestrated.”

Boooi links this to the series of protests that have taken place across the city recently, and which have resulted in damage to schools and various modes of transport. Nonetheless, there is no direct link between these protests and our litigation against the city on behalf of the SAHRC and Mr Qolani, nor evidence to support Booi’s claims.

Booi has conflated unrelated matters in a manner that seeks to delegitimise any resistance to the City’s actions, which are unlawful and unconstitutional.

First, the Legal Resources Centre is not involved in any activities that undermine the City of Cape Town, especially protests linked to service delivery. What we have been involved in, and publicly so, is the defence of the rights of informal settlement dwellers whom the city wants to evict without due process or the oversight of the court, in contravention of PIE stipulations.

While the City has a right to remove people who have unlawfully occupied public land under its administration, it must do this with the requisite legal documents.

In two City of Cape Town media statements, Mayor Plato further sought to mischaracterise the LRC and our clients by claiming that we have refused central relief being heard on 20 August, and that we seek to legalise unlawful occupations of private and public land.

These are not the facts.

The reality is that the draft order received from the judge on Friday 24 July was agreed to by all parties, including the City. Herein, the date stipulated for hearing this matter is 20 August.

Further, we do not seek to interdict the City from attempting to stop unlawful land occupation; rather, we seek a declaratory order that the City must be in possession of a court order made after considering all the relevant circumstances, to carry out evictions or to remove structures that they claim are “unoccupied”.

Whether a structure is occupied or not should be determined by a court of law, not by city officials who act as judge and jury on the matter. We also want the court to declare the existence of the Anti-Land Invasion Unit as unconstitutional, since this extrajudicial force is not subject to oversight or a regulatory body in the same way as the South African Police Service or the Metro police.

In their statements, both Booi and Plato repeatedly refer to land occupation as “invasions” because it is easier to criminalise people who occupy land, rather than contend with the real reasons that motivate people to resort to occupying land that does not belong to them.

The choice of language here is deliberate and is aimed at dehumanising the poor, denying them empathy. This way, any violent state repression used against them is therefore warranted and deserved. This is not an entirely new strategy.

We have seen how this has played out in the past, with Marikana being a vivid and horrific testament to the effects of careless language usage, with striking miners characterised as “dastardly criminals”.

Further, these divisive tactics are also an attempt to create categories of citizens worthy of receiving services from the city, versus the illegitimate “land invaders” who, by occupying City land, usurp housing delivery from citizens who have been patiently waiting for years – despite the fact that both these groups are let down by a failure to deliver by the City.

It is also in the city’s best interest, especially in the context of Covid-19, to ensure that poor residents or backyard dwellers are protected from unlawful evictions. This way, these residents do not find themselves having to occupy land as will inevitably be the case should they be evicted.

If landlords – particularly in cases where people are “backyard dwellers” – evict them and the City subsequently demolishes their makeshift homes, where are they supposed to go?

Erecting a makeshift home on occupied land is an exercise in precarity. The risk of eviction is certain, as is the risk of violence, given the lack of safety or security. There is also no access to basic services, thus exacerbating the possibility of violence, for example, in walking long distances to collect water, especially for women or children.

All indications point to the City of Cape Town holding an attitude of disdain towards the poor and which, to an extent, has its own unwritten policy of criminalising poverty.

The City therefore seems to have no interest in addressing the structural nature, or interrogating the root causes, of Cape Town’s glaring inequalities. Instead, it is content to push people to the fringes of the city, where they cannot draw on social services or sully the city landscape with their poverty.

Wishing away inequality does not solve it, neither does piggybacking on a State of Disaster in order to put draconian policies into practice at a time when greater compassion and solidarity are needed to solve our deep-seated issues.

This is especially important when, daily, the Covid-19 crisis makes it clear that the country, as well as the global world order, cannot remain as it is – current systems must be dismantled and fashioned anew, in ways that ensure all people are included. DM/MC