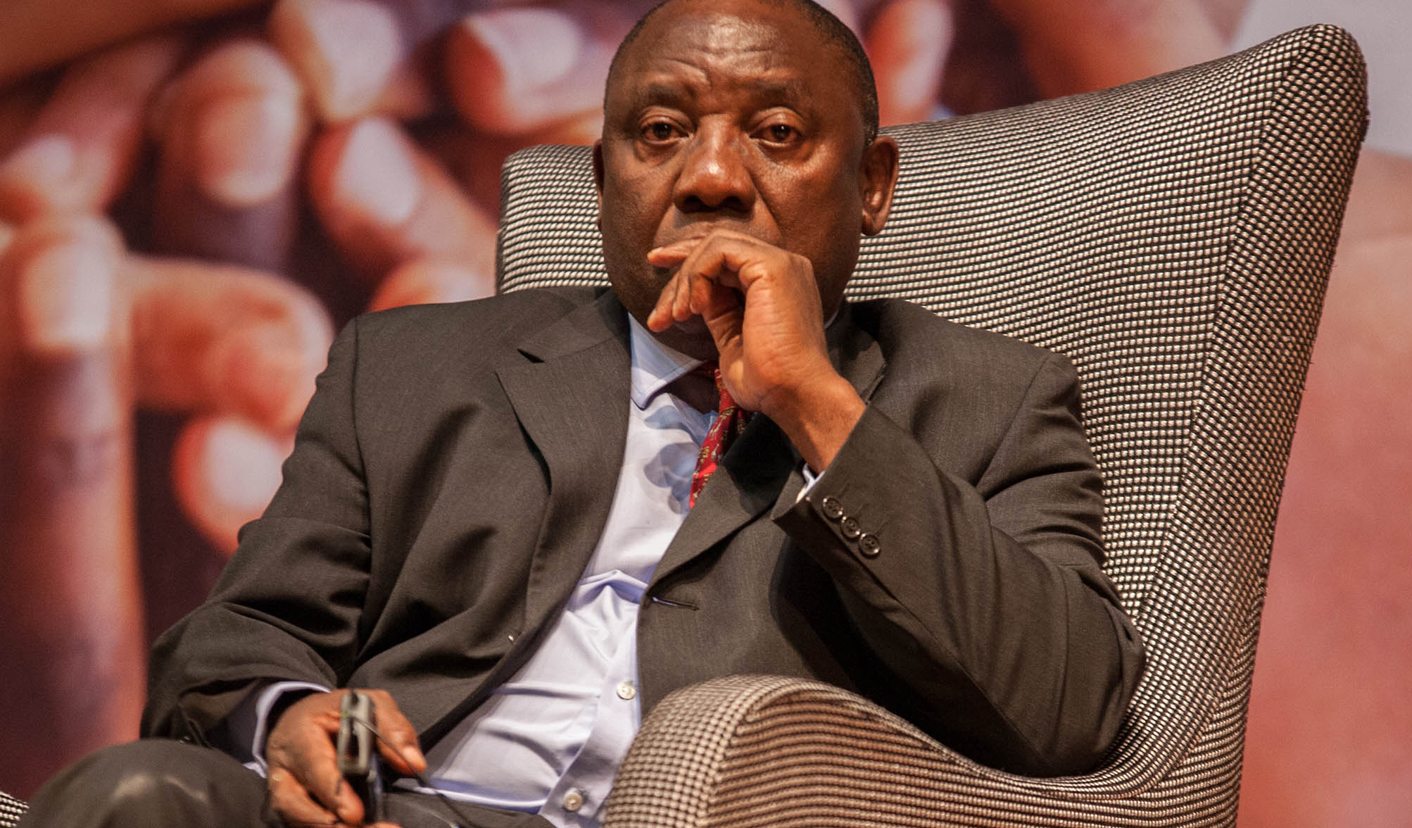 Cyril Ramaphosa’s involvement in the decisions that led to police opening fire on striking mine workers in Marikana has, until now, been limited to snippets of email correspondence submitted to the Farlam Commission of Inquiry. But the ANC deputy president’s own explanation of his conversations with government ministers in the lead-up to the massacre reveals the real extent to which he used his access to power to rally support for Lonmin. By KHADIJA PATEL.

The Daily Maverick on Thursday revealed evidence of possible political interference into the policing of the Marikana miners’ strike. More specifically, transcripts obtained by the Daily Maverick indicate that ANC Deputy President and Lonmin PLC non-executive director, Cyril Ramaphosa, had been pressuring the police minister to act against the striking workers in Marikana.

It has previously been revealed that Ramaphosa had specifically called for “concomitant action” to be taken against the striking workers at the platinum mine.

A transcript of a meeting that was held between the SAPS and Lonmin two days before the massacre specifically mentions Ramaphosa “pressuring” Police Minister, Nathi Mthethwa, proving that Ramaphosa’s call for “concomitant action” was not an isolated act of political interference.

The office of the ANC Deputy President, Cyril Ramaphosa, has referred all questions about his involvement in the handling of the strike in Marikana last year to a statement Ramaphosa filed with the Marikana Commission of Inquiry, chaired by retired judge Ian Farlam.

But on Wednesday, after the Daily Maverick story, Mr Ramaphosa’s communicators felt it was necessary to contact us and point out to ANC Deputy President’s statement from earlier this year.

And so we looked into it again, armed with the new understanding that emerged just a day before.

The statement, which was filed earlier this year, was not publicised at the time, but its contents are extremely significant in attempting to understand what exactly precipitated the massacre in Marikana last year.

In the lead-up to the massacre, Ramaphosa spoke with Mthethwa as well as Minister of Mineral Resources, Susan Shabangu, who, in turn, promised to discuss the situation in Marikana with President Jacob Zuma.

In his statement, dated 30 May, 2013, Ramaphosa denied that his engagement with government ministers had had a “direct bearing” on the events of 16 August, 2012.

“Such an inference has no basis,” he said.

Ramaphosa said his conversations with government officials served to inform government of the gravity of the situation in Marikana – which at the time had already cost several lives.

“Arising from the violence, which included the brutal murder of six employees, two Lonmin security personnel and two police officers over the course of several days, Lonmin management took the view that this was not simply an industrial dispute, and that Lonmin needed the SAPS to restore and maintain law and order and prevent further loss of life. Lonmin was anxious that government urgently be informed of the seriousness of the situation,” he said.

Ramaphosa claims his call for “concomitant action” was merely a request to stem the loss of life in Marikana: “The reference to ‘concomitant action’ in my email communication of 15 August 2012 was to indicate that appropriate steps should be taken to bring the violence and deaths to an end. I was calling for peace and for the necessary steps to be taken to save lives.”

Regarding his conversation with the Minister of Police Nathi Mthetwa, Ramaphosa says, “I stressed that the SAPS needed to take appropriate steps to ensure that they protect life and property and to arrest the perpetrators of the terrible acts of violence and murder. The Minister indicated to me that this was the SAPS’ objective.”

Regarding his discussion on the impasse with Shabangu, Ramaphosa said, “The import of my discussion with her was to bring to her attention the increasing acts of violence taking place at Marikana, which in Lonmin’s view were criminal and which were not going to be resolved without political intervention. Minister Shabangu agreed with Lonmin’s characterisation of the situation and indicated to me that she would bring the matter to the attention of the Cabinet and the President. She also indicated to me that she would discuss the matter further with the Minister of Police.”

Ramaphosa, however, had had two discussions with Shabangu in the lead-up to the massacre. After the first, a telephonic discussion, he told colleagues: “I called her and told her that her silence and inaction about what is happening at Lomnin was bad for her and the government.”

“1. She agrees that what we are going through is not a labour dispute but a criminal act. She will correct her characterisation of what we are experiencing,

2. She is going into Cabinet and will brief the President as well and get the Minister of Police Nathi Mthethwa to act in a more pointed way.

3. She will be in Johannesburg by 5pm and would be able to speak to Roger [Lonmin executive].”

He concludes his email with: “Let us keep the pressure on them [government] to act correctly.”

Ramaphosa’s email correspondence with other Lonmin officials exposes the extent to which the British company relied on Ramaphosa’s relationship with government to rally government agencies like the SAPS to Lonmin’s side.

It remains to be proven that Ramaphosa had a direct influence on how police acted on 16 August – that he was responsible for the police opening fire on the striking mine workers. However, what Ramaphosa’s own statement to the Farlam Commission and his email correspondence reveals is a businessman with inordinate access to – and influence over – the South African government.

Ramaphosa used that access to persuade government and its agencies to act as Lonmin saw fit – extending even to the language ministers used to describe the volatile situation in Marikana. Ramaphosa, however, insists that his engagement of government ministers stemmed from a desire to prevent the further loss of life in Marikana.

“The events of 16 August 2012 were truly tragic, but I submit that the tragedy is not linked in any way to my engagement with government ministers, which was initiated by me in an endeavour to prevent further loss of life.”

Ramaphosa also stands by his labelling of the situation in Marikana as “criminal”, or, as he put it to his colleagues, “dastardly criminal”.

“The terrible events that have unfolded cannot be described as a labour dispute,” he said in an email to Lonmin colleagues. “They are plainly dastardly criminal and must be characterised as such. In line with this characterisation there needs to be concomitant action to address this situation.”

And yet Ramaphosa himself has admitted that “stakeholders” in Lonmin’s operations in Marikana were responsible for the massacre.

“I think a lot of us as stakeholders are to blame,” Ramaphosa said to the SABC last year.

“Marikana should not have happened; we are all to blame and there are many stakeholders that should take the blame. But taking the blame should mean that we should make sure it never, ever happens again,” Ramaphosa said.

Whichever way it is read and analysed, however, Ramaphosa’s version of events still suggests that the prevention of a repeat of Marikana must begin with shielding government from the influence of businesspeople, no matter their stature in the ruling party. The Marikana massacre was a horrible event on its own. But knowing that so many lives were lost because miners were pawns in a much bigger game will haunt South Africa for years to come. DM