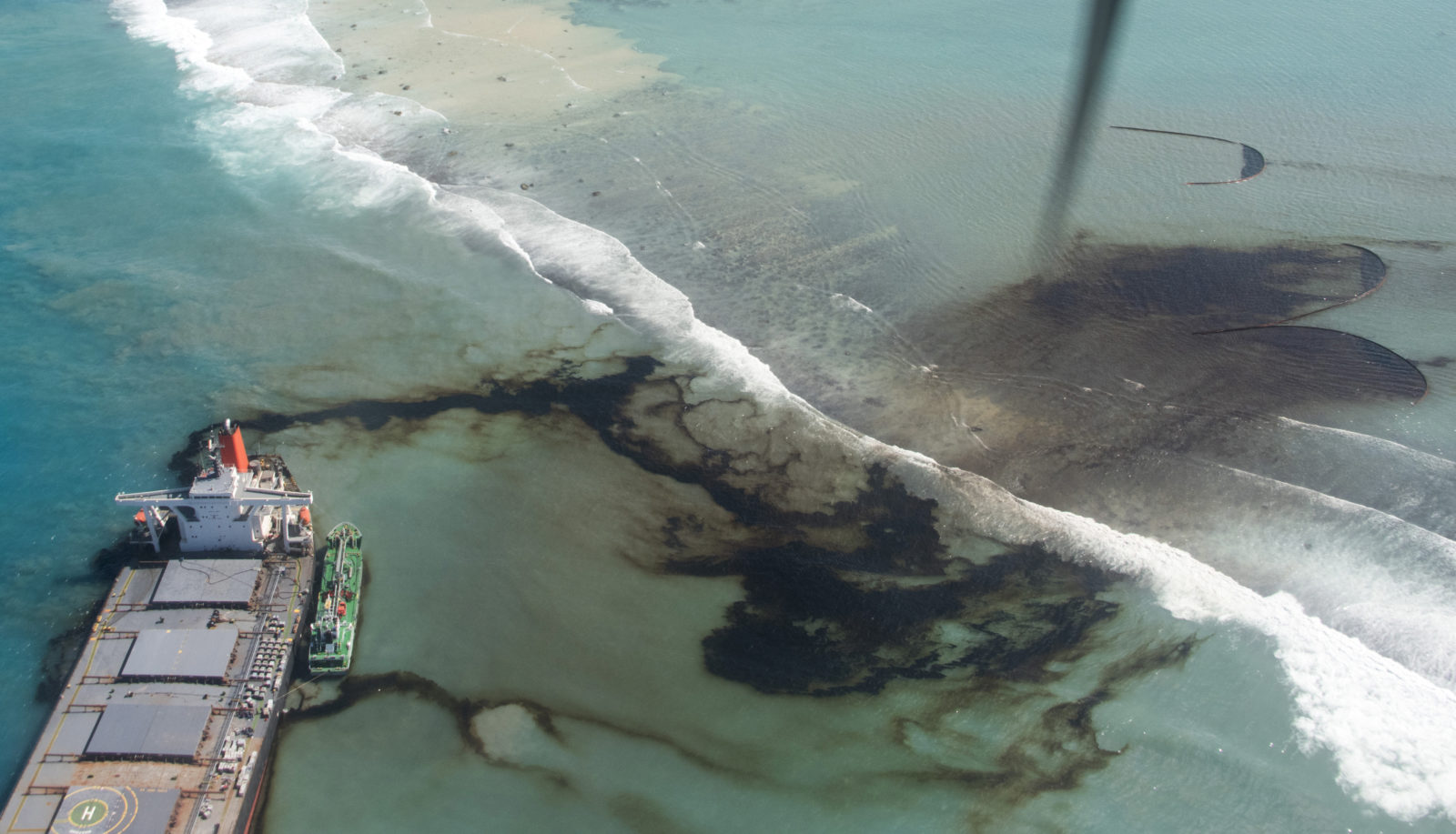 An undated handout photo made available by the French General Staff Army in Mauritius shows oil drifting ashore over coral reefs from the MV Wakashio, a Japanese owned Panama-flagged bulk carrier ship that recently ran aground off the southeast coast of Mauritius (issued 11 August 2020). The ship was sailing from China to Brazil when it hit coral reefs near Pointe d'Esny on 25 July 2020. EPA-EFE/Etat-major des Armées / HANDOUT HANDOUT EDITORIAL USE ONLY/NO SALES

The shipwreck of the MV Wakashio has caused one of the worst environmental catastrophes for Mauritius, and its devastating impact is expected to last for decades. Over 1,000 tonnes of fuel oil leaked into pristine Mauritian waters, covering the nearby shore in toxic sludge and immersing the ecosystem in a desperate struggle for survival.

This environmental crisis couldn’t have occurred at a worse time for Mauritius. The spill will seriously impede the recovery of a Mauritian economy highly dependent on coastal tourism and already battered by Covid-19 travel restrictions.

Mauritius and other African states need to promptly review their contingency strategies and response capacities so we can start positing immediate lessons to be learnt.

The national and international response to the MV Wakashio crisis was commendable. France, India, Japan and the International Maritime Organisation cooperated to support local Mauritian efforts in a race against time to pump out the fuel from the vessel, which eventually broke apart on 15 August 2020. Meanwhile, local volunteers flocked to the shore with improvised booms and barriers.

While a full investigation and report is urgently required, it’s possible to start piecing together a narrative of what has occurred and how it turned so bad so quickly.

The MV Wakashio left China on 14 July 2020, heading for Brazil. On 25 July, it ran aground on the reefs located roughly a mile off Pointe d’Esny and the Blue Bay Marine Park along the south-eastern shore of Mauritius. No oil leakage was reported at the time, and the Mauritius coast guard swiftly deployed booms and took other preventive actions. The government activated its National Oil Spill Contingency Plan the following day.

By 5 August 2020, a minor oil slick was observed surrounding the vessel. It was still assumed that the country’s contingency plan was sufficient and that “the risk of oil spill was still low”. But then the MV Wakashio flooded and began sinking. Oil started to spill into the sea.

On 7 August, Prime Minister Pravind Jugnauth declared a national environment emergency. Fisheries Minister Sudheer Maudhoo suggested that “this is the first time that we are faced with a catastrophe of this kind and we are insufficiently equipped to handle this problem”. Mauritius called for international help once the scale of the emergency became apparent and quickly overwhelmed the resources and capacity of the country’s national contingency plan.

Some of these resources were acquired as part of the Western Indian Ocean Marine Highway Development and Coastal and Marine Contamination Prevention project from 2007-2012. The project also called for the establishment of the Regional Marine Pollution Coordination Centre (RCC) for Marine Pollution Preparedness and Response in the Western Indian Ocean.

South Africa will host the RCC and its establishment must now be expedited. The disaster demonstrates how even seemingly small oil leaks and spills can be devastating, especially when they occur in sensitive and critically important environmental areas.

Will other African countries and regional organisations develop sufficient capacity to respond to crises on the scale of the MV Wakashio without depending on international assistance? There is a great risk of oil spills and leaks occurring elsewhere in the African maritime domain in the future, especially spills that occur during bunkering.

The Cape of Good Hope route is a maritime super highway. Some countries, like South Africa, are able to swiftly respond on their own, as demonstrated in May 2020 when the potential wreck of the Yuan Hua Hu, also carrying 4,000 tonnes of fuel oil, was narrowly averted.

Many countries such as Mauritius lack at least some of the resources or capacities needed to deal with such a disaster. Governments require up-to-date assessments to plan future responses. Better and more collective resources and skills at a regional or continental level are required.

Improved accountability mechanisms are also important. The Japanese owners of the MV Wakashio have offered, under international obligations, to pay compensation for applicable damages caused by the oil spill. Yet in other cases it might not be as easy to track the owners and determine liability (as can be seen in the investigation into the tragic Beirut port explosion of 4 August 2020).

It is time for African maritime institutions to review their approaches and develop appropriate expertise and response mechanisms. This should ensure fast and effective regional or continental action when the inevitable oil leaks arise.

The results should be reported to key multilateral organisations – ideally to the African Union (AU) – as part of the implementation of 2050 Africa’s Integrated Maritime Strategy. The AU could, for instance, convene a consultative forum for experience and skills sharing with inputs from all the regional economic communities such as that hosted by the Southern African Development Community in 2018.

Disaster relief is expensive, but is nowhere near as controversial as other maritime issues such as creating security frameworks and determining boundaries. It can also foster collaboration anchored in regional AU institutions that draw on indigenous expertise and capacities. DM

Timothy Walker is a Senior Researcher and Maritime Project Leader, ISS Pretoria and Christian Bueger, Professor of International Relations at the University of Copenhagen and Co-Director of the SafeSeas network.