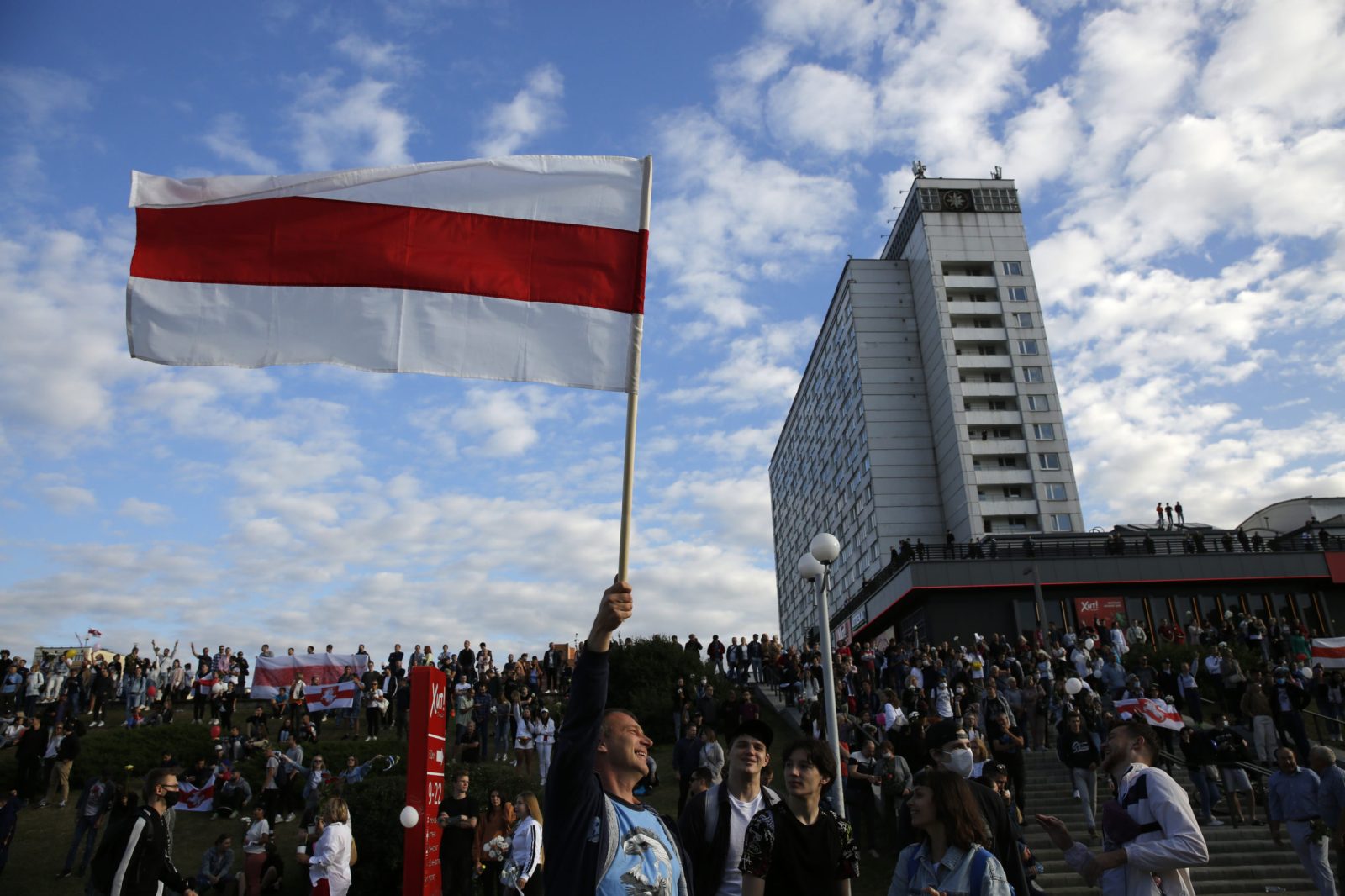 epa08601975 A man holds old national flag during a protest rally against official results of the presidential election in Minsk, Belarus, 13 August 2020. Long-time President of Belarus Alexander Lukashenko won the elections by a landslide with 80 percent of the votes, a result questioned and protested by the oppositions. Opposition leader Tikhanovskaya fled to Lithuania after rejecting the election results she claimed was rigged. EPA-EFE/TATYANA ZENKOVICH

MINSK, Aug 14 (Reuters) - Belarusian opposition politician Sviatlana Tsikhanouskaya on Friday called for more peaceful protests and urged supporters to sign an online petition demanding a recount of a presidential election, in which she believes she was cheated out of victory.

In a video posted on YouTube, Tsikhanouskaya, who is in neighbouring Lithuania, also asked supporters to demand an official investigation into allegations that last Sunday’s election was falsified.

The government on Friday began releasing thousands of protesters detained in a violent crackdown after issuing a rare public apology in an effort to quell nationwide protests that now pose the biggest challenge to President Alexander Lukashenko in his 26 years in power.

At least two protesters have died and around 6,700 were detained in the crackdown.

Nevertheless, a new round of protests began on Friday morning as people formed human chains in the capital, Minsk, and pressure was building on Lukashenko from outside.

European Union foreign ministers were due to hold an emergency meeting on Friday to discuss possible new sanctions.

“We need additional sanctions against those who violated democratic values or abused human rights in Belarus. I am confident today’s EU Foreign Ministers’ discussion will demonstrate our strong support for the rights of the people in Belarus to fundamental freedoms and democracy.”

The official BelTA news agency quoted Foreign Minister Vladimir Makei as saying on Friday that Belarus was ready for “constructive and objective dialogue” with its foreign partners on events related to the presidential election and its aftermath.

In her video, Tsikahnousakaya called for dialogue and peaceful protest.

“We need to stop the violence on the streets of Belarusian cities. I call on the authorities to stop it and begin dialogue,” she said.

“I ask mayors of all cities, on Aug. 15 and 16, to act as the organisers of mass, peaceful gatherings in each city or town.”

Protesters say the fact that Lukashenko had been officially credited with 80% of votes in the election showed it had been massively rigged.

Lukashenko, a 65-year-old former Soviet collective farm manager, has faced increasing anger over his handling of the coronavirus pandemic – which he dismissed as a “psychosis” – as well as sluggish economy and human rights.

Local media reported discontent among workers at some big state-run companies – the pride of Lukashenko’s Soviet-style economic model. (Reporting by Andrei Makhovsky and Vasily Fedosenko in Minsk; Additional reporting by Alexander Marrow and Maria Kiselyova in Moscow, Gabriela Baczynska in Brussels and Anna Ringstrom in Stockholm; Writing by Matthias Williams and Kevin Liffey;)