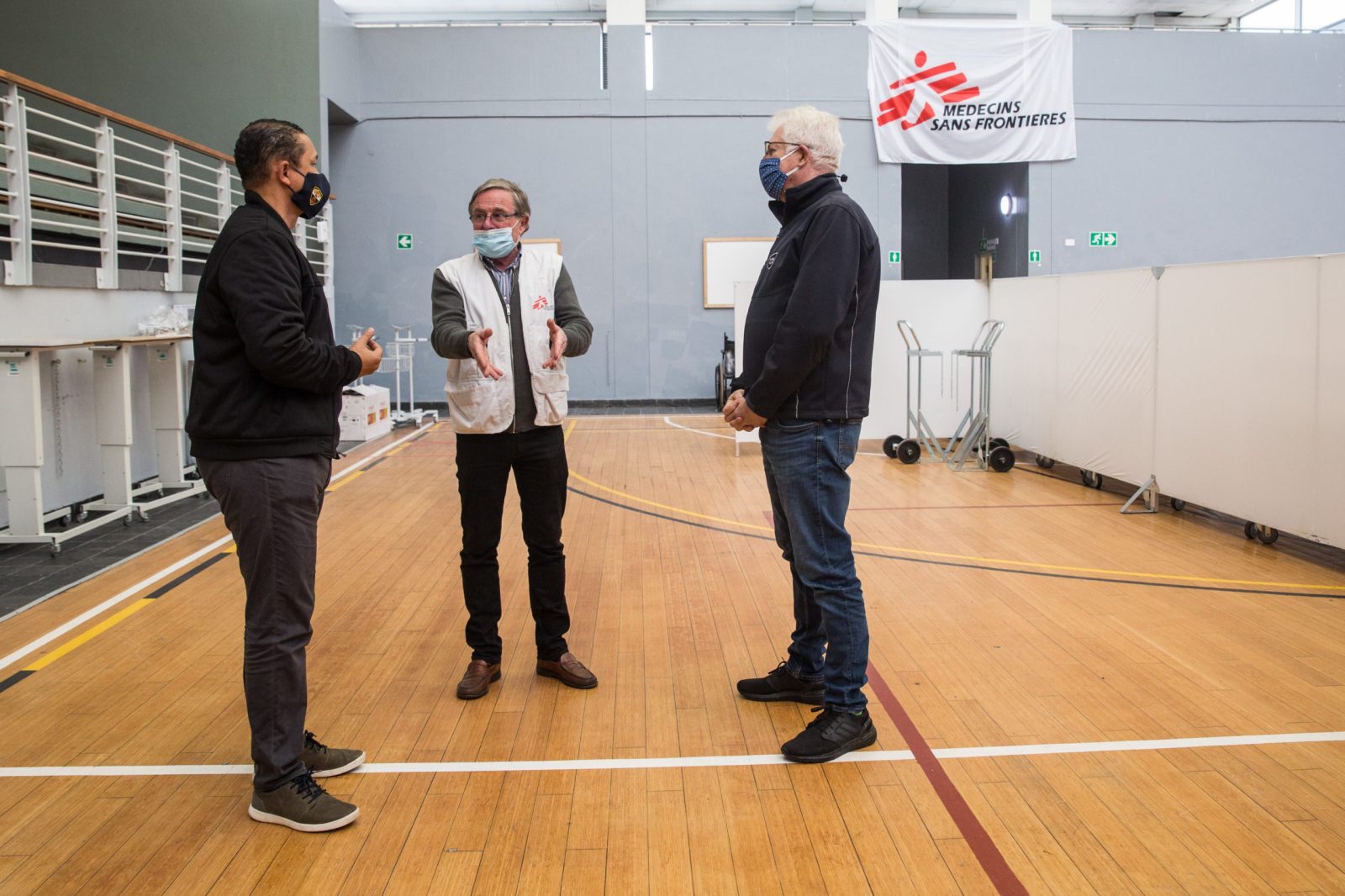 From left to right: Dr. Keith Cloete, Head of the Western Cape Health Department, Dr Eric Goemaere of MSF, and Alan Winde, Premier of the Western Cape, during a press briefing on the closure of the field hospital in Khayelitsha. (Photo: Ashraf Hendricks)

A total of 241 patients came through its doors, but now the temporary Covid-19 field hospital in Khayelitsha will close. It is yet another sign that the Western Cape, at least for now, is beyond the worst of the pandemic, although it is far from over.

In March 2020, Khayelitsha was the first township in South Africa to have a confirmed Covid-19 case. The Khayelitsha Thusong Service Centre, a sports community facility, was then converted into a 60-bed field hospital and officially opened on 2 June 2020. Managed and sponsored by Médecins Sans Frontières (MSF), the field hospital was opened as part of the Western Cape response to the pandemic and to support the nearby Khayelitsha District Hospital.

“In that time, we had a total of 241 patients come through these doors,” said Celeste Jonker, the MSF Medical Activities Manager. Of those patients, 34 died.

The decision to close the field hospital is based on data, said Dr Keith Cloete, head of the Western Cape Health Department. He said that the facility was always temporary and that as the need receded and the permanent Khayelitsha hospital could cope, it was the right time to close it. He said that if the disease resurges, lessons have been learnt and additional capacity is available elsewhere in the system.

Cloete emphasised that even though numbers are going down, people must be vigilant with physical distancing, hand washing and mask wearing. “We won’t have a vaccine for the next 12 to 18 months,” he said.

Premier Alan Winde praised MSF’s work at the temporary hospital. He then emphasised: “We’ve got to now save jobs and stop hunger and unemployment.” He said that the centre can now hopefully be used again as a place of hope and economic opportunity for the people of Khayelitsha.

Winde said: “Government is never ever going to be the same. You can build hospitals in weeks.” He said that things have changed for the better “all because of these kind of partnerships”.

Winde thanked “every single person that played a role here”.

According to the national Ministry of Health, the Western Cape had just over 100,000 confirmed Covid-19 cases and 3,454 deaths as of 11 August 2020. But often, a Covid-19 death is not recorded as such because people die at home or without a positive diagnosis.

The latest Medical Research Council (MRC) mortality report indicates that there have been just under 4,700 “excess” natural deaths in the Western Cape since the pandemic started. (Natural deaths are those that are not due to homicide, vehicle collision, suicide, accidents or poisoning.) Most of the excess deaths are likely to be Covid-19.

And while countrywide the official death toll from the pandemic is 10,751, the MRC calculates over 33,000 excess natural deaths since the pandemic started. But the good news is that the number of excess deaths dropped for the week ending 4 August 2020. Also, excess deaths in the Western Cape have been declining for a few weeks. But the South African epidemic is far from over.

Cape Town also has a temporary hospital in its international convention centre, which can take 800 patients. But Bianca Capazorio, spokesperson for Winde, said that no decision has been taken yet on when it will close. DM