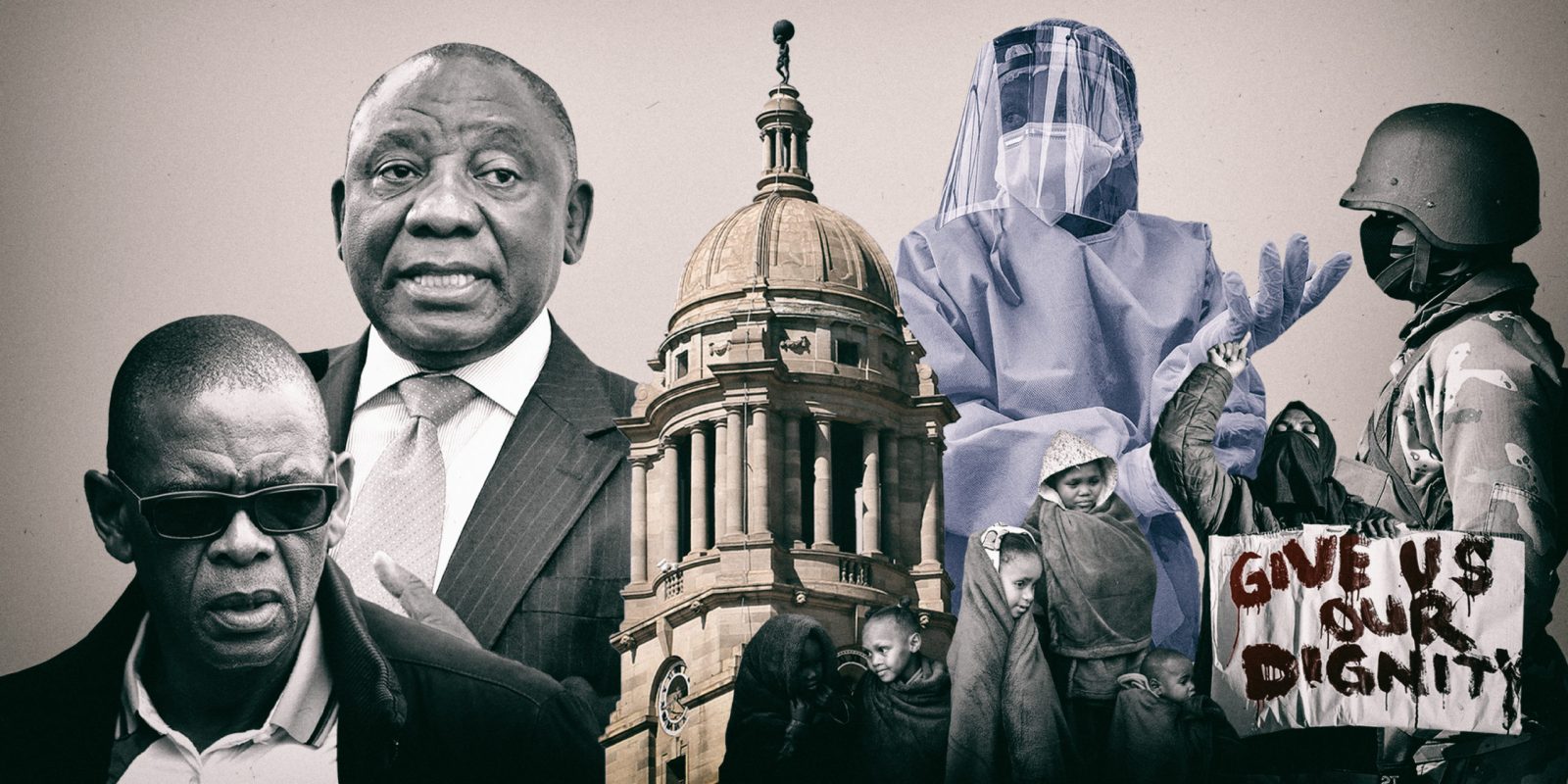 If the scandal around the Covid-19 emergency personal protective equipment tenders awarded to the politically connected shows anything, it’s the prevalent imperviousness to good governance. And how the much-talked-about capable state remains largely missing in action.

Cabinet decided on another ministerial task team — this time to compile lists of Covid-19 personal protective equipment (PPE) contracts — in response to the public outcry over how a husband, a wife, sons and a daughter of those at the heart of governance as top officials, public elected reps or leaders of the governing ANC got lucrative Covid-19 PPE tenders.

“… all ministers and premiers (are requested) to provide information on the names of companies and details of tenders and contracts that have been awarded in national departments, provincial governments and public entities during the period of the national State of Disaster,” said that statement.

“The president has directed that these lists must be provided to the committee of ministers as a matter of urgency this week. The committee will prepare a comprehensive report, which the president intends to release as public information.”

The announcement made, President Cyril Ramaphosa followed up with a letter to all ministers. 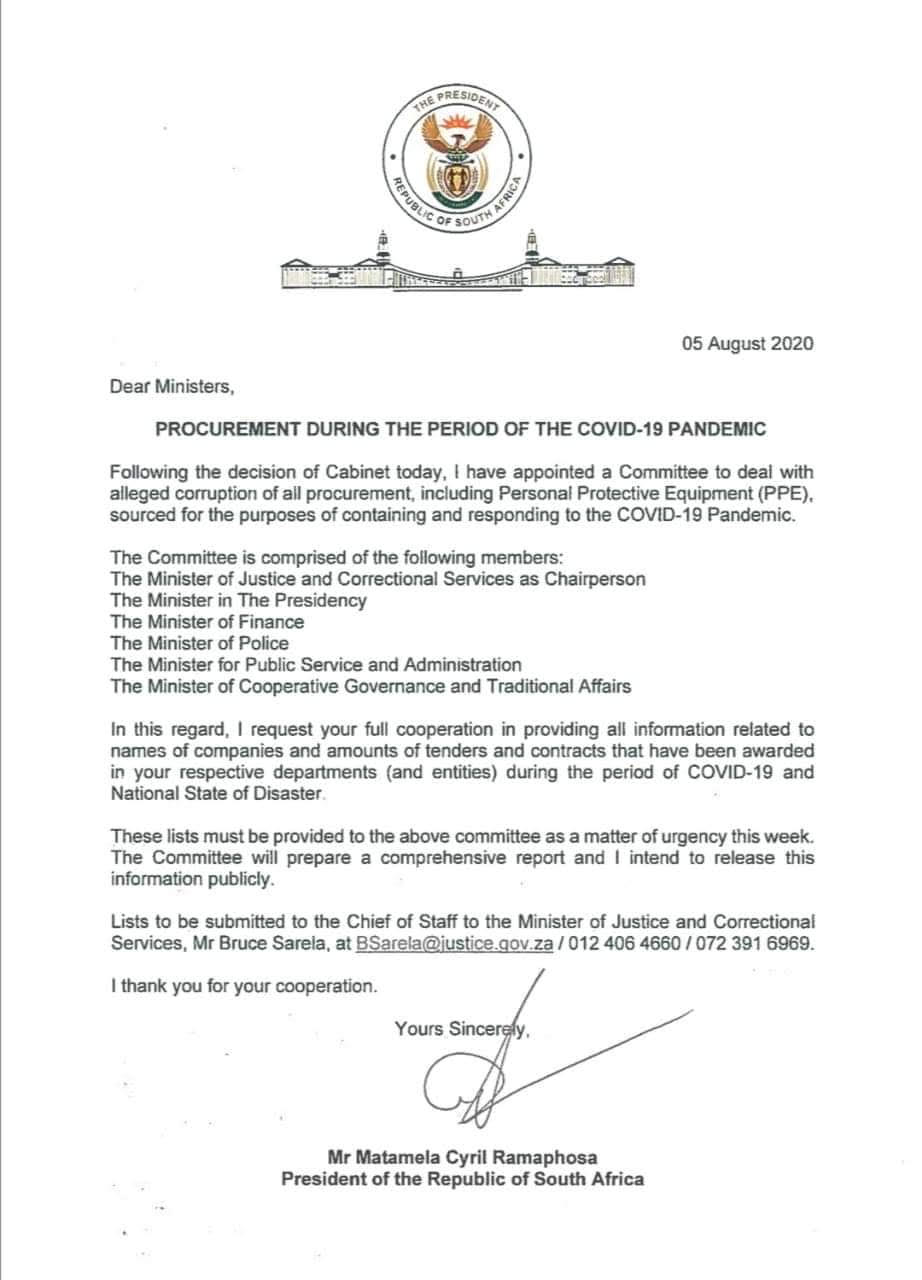 But this ministerial team to compile lists of Covid-19 PPE contracts is little more than a mirage in the South African desert of good governance.

It’s a strategy of being seen to do something, to be responsive to a public outcry at the theft and misdirection of resources to the politically connected — without actually having to do much.

Effectively, compiling a list of Covid-19 PPE tenders and contracts is an administrative chore. Every director-general and department head has this information at their fingertips; or should, if they are doing their jobs properly. As would National Treasury, despite a delay as tenders are handled at departmental and provincial levels with accounting officers having up to 10 days to report to National Treasury.

It’s unclear why everyone else could not just do the same.

Questions must be asked on whether the presidential marching orders were necessary because otherwise, ministers, and others in the executive government office, would not do their work — or because these presidential interventions are part of the reorientation of the state to what’s dubbed a super-presidency.

Ramaphosa moves to tame structure and size of public service, likely a first step towards super-presidency

It underlines the absence of statecraft. But statecraft, or the skill to govern, is required in a constitutional democracy founded on the principles of accountability, responsiveness and openness. Instead, governance has become mired in rigid protocol, stuck in lack of capacity and tethered by often obtuse and long-winded processes.

And so, for example, Justice stands out for having taken just one year to draft and get Cabinet approval for tabling in Parliament three draft bills dealing with gender-based violence, from tightening bail criteria to improved domestic violence protection.

Arising from the presidential gender-based violence summit in September 2019, this timeline is unusually fast. A snap survey shows it more often takes up to two years for a draft bill to get to Parliament where the legislative process starts. And sometimes it can take more than 10 years, and several attempts, as illustrated by constitutionally compliant expropriation legislation, which remains outstanding — and caught up in the politically driven push to amend the Constitution to expressly allow expropriation without compensation.

Perhaps this is why the martial talk and war narratives of South Africa’s Covid-19 measures have taken off as it has in the governing ANC administration.

From the National Coronavirus Command Council that took decisions — at least two presidential addresses to the nation said so until challenges underscored how the Constitution only recognises Cabinet as the executive decision-maker — to the provincial command councils, and the Gauteng ward war rooms. Talk of “fighting the visible enemy”, how all South Africans are now “soldiers in the war” against Covid-19. And it goes on.

While publicly Ramaphosa is now at pains to say how “Cabinet has decided” — and more recently there’s also been a nod to a role by the Forum of South African Directors-General — his ministers not infrequently still talk of taking matters to the National Coronavirus Command Council.

That structure is backed by the National Joint Operational and Intelligence structure (NatJoints), which brings together police, soldiers and spooks in a structure that is not established in law or regulation — and that accounts to no one.

This effectively means the governance decision-making processes in South Africa’s Covid-19 lockdown — now in Day 140, one of the harshest and longest in the world — remains opaque and unaccountable, even if Cabinet may claim to have a final say. And in the contest between securocrats and micromanagers, policy is shaped — seemingly on the hoof.

Lockdown Level 3, Version 3: Policymaking on the hoof amid war talk

Curfews, police permits, movement restrictions and the ban on alcohol and tobacco are part of the securocrats’ command and control arsenal. It makes the jobs of police, soldiers and spooks easy.

But it is not people-centred governance.

It doesn’t address that dichotomy of a South African type — governance paralysis on the one hand, while facilitating the benefits of the politically connected.

In many ways, South Africa’s politicians may believe they have free rein. For the governing ANC, in particular, much is determined by the shifting factional sands.

Control of the state remains central as the governing party is determinedly statist — the system where the state has significant and substantial control over the political economy and social matters. Getting a hand on the levers of power is how it’s put by the ANC-led alliance with labour federation Cosatu and the South African Communist Party (SACP).

It is this context that allows ANC Secretary-General Ace Magashule, amid the public outrage over politically connected family members scoring Covid-19 PPE tenders, to go on public record to say no law prohibits this.

And while correct in a narrow, technicist and blinkered manner, these comments ignore the plethora of legislation, regulation, codes of conduct and financial disclosures that sketch a good governance framework in which gain by political connectivity is inimical.

Governance includes a system of checks and balances, and oversight. It also requires a professional public administration that is not cowed into submission by political bosses, unlike what emerged in the public hearings on the death of 143 Life Esidimeni patients after Gauteng Health decided to move them to often unaccredited care centres.

At the State Capture commission, Deputy Chief Justice Raymond Zondo more than once appeared exasperated, asking in particular about action on checks and balances (rather than silent demurring) and parliamentary oversight.

And while Parliament has all the tools — both from rules and the Constitution — it’s not always clear oversight happens effectively and efficiently so ministers and officials know there are consequences.

Questions must be asked of the governing ANC about what oversight rigour could be expected from its MP, Bongani Bongo, the former state security minister turned home affairs committee chairperson who is facing a fraud trial for attempting to bribe the evidence leader in the parliamentary Eskom State Capture inquiry. Or Mosebenzi Zwane, the former mineral resources minister turned transport committee chairperson, whom Eskom subpoenaed as one of 12 in a civil suit to claim R3.8-billion in damages.

While parliamentary Co-operative Governance committee chairperson Faith Muthambi, a former communications minister, by all accounts is running a tight ship, oversight of an ANC administration by ANC MPs is soft.

A day after Cabinet’s announcement on Covid-19 PPE tender transparency, and in the wake of the Gauteng PPE tender scandal (that touched the provincial administration, the City of Johannesburg and the Presidency) the Co-operative Governance committee meeting on how Gauteng is dealing with Covid0-19 accepted the acting Health MEC’s silence.

“On questions which the committee asked on health, the Acting MEC, Mr Jacob Mamabolo, said it is not appropriate to respond to the questions as there are investigations underway on the same matters and that would create an impression of parallelism on the matters,” said the statement after the meeting, which was also attended by Co-operative Governance Minister Nkosazana Dlamini Zuma and her two deputies, Obed Bapela and Parks Tau.

Three days earlier, ANC Chief Whip Pemmy Majodina, issued a statement on 3 August saying that as MPs “we will continue to robustly play our oversight role to ensure accountability and compliance to the regulations set by the government for procurement processes, including any expenditure using state resources”.

The ANC chief whip’s 826-word statement talked of “deplorable conduct unbecoming”, and the ANC parliamentary caucus being “deeply embarrassed by this barbaric behaviour”.

Magashule also acknowledged embarrassment, as did others.

But the crux is what should be done is not talk or optics, but action.

It matters what kind of action. It cannot be the type which has come to dominate amid the militaristic narratives of the 140-day-old Covid-19 State of Disaster — securocrat command and control or rule by ministerial decree.

It must be action in keeping with South Africa’s constitutional democracy that situates people at the heart of decision-making, alongside accountable, transparent and responsive good governance. DM