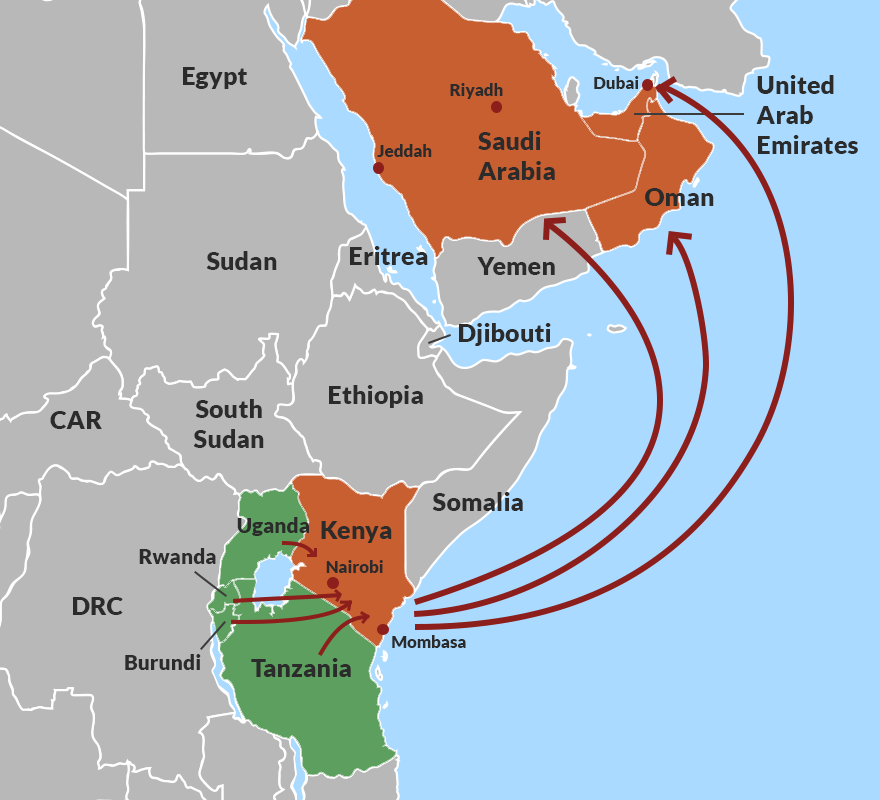 Evidence suggests that trafficking from the region to the Middle East is being run entirely by East Africans.

Ninety-six Ugandan women, mostly children and youth, were stopped at Nairobi’s international airport in January en route to the United Arab Emirates (UAE) for work opportunities. The girls, who lacked proper employment papers, were victims of a well-established human trafficking ring in East Africa, headquartered in Kenya and operating under the guise of employment agencies.

This wasn’t the first such interception. Almost every month, Kenya’s Directorate of Criminal Investigations reports at least one interception involving victims not only from Uganda but also Burundi, Rwanda and to a lesser extent Tanzania. Most of East Africa’s trafficking takes place in and through Kenya.

Traditionally the value chain of this criminal network has comprised three links. First are regionally based recruitment brokers who ferry people from their respective countries to Kenya. Second are the Kenyan-based links who “receive” the people and act as the country’s employment agencies. They move victims from Kenya to the host country. Third are the counterparts who often pose as foreign employment agencies. They are stationed in the host country and “receive” people sent from Kenya.

Recent cases and new research by the ENACT organised crime project suggest a shift in the workings of the trafficking value chain as far as the third ‘link’ is concerned. There is evidence that the trafficking of women and girls from East Africa to the Middle East is now being carried out entirely by East Africans.

Interviews with victims revealed that they were received in the foreign country by ‘familiar faces’. In February 2020, 50 Kenyans, each of whom paid around US$2,000 to supposed employment agencies, were trafficked to the UAE and enslaved in a house by a “Mombasa agent” who has operations in Mombasa and Dubai. The victims said there were many such “trafficking houses” run by Kenyans in Dubai, housing other East African nationals such as Ugandans and Tanzanians.

A specific case revealed to Lucia Bird, Senior Analyst at the Global Initiative Against Transnational Organised Crime, highlights the multi-national and regional interconnections. A Ugandan girl was trafficked to Kenya by a Ugandan family friend. A Kenyan national then flew with her to Oman where she was collected at the airport by an Ethiopian national before being driven to her Omani employers.

Similarly, Angelo Izama, a human trafficking consultant who volunteers on a project for trafficked victims at a church in the UAE, told ENACT of a Ugandan girl recruited to be a receptionist. She was received by a Ugandan in Dubai and forced into sex work.

While the links in a criminal value chain work together, there is also competition, with operators vying for a greater share of the more profitable elements in the chain. Regional trafficking networks appear to want to control the entire value chain, from sourcing to recruiting victims, trafficking them out of East Africa, and receiving them in the foreign country. This well-coordinated and continually shifting transnational crime process is difficult to police and prosecute.

The officer also notes that policing the crime is becoming more difficult. As an example, the officer referred to a joint initiative in 2017 between the Kenyan and Ugandan governments that appeared promising in its anti-trafficking measures. However, it failed due to a lack of proper intelligence on the criminal value chain, and inconsistent engagement between the two countries.

Regulating the labour exporting sector is also complicated. As with Kenya, Uganda imposed a ban on labour emigration to the Middle East in 2016, and then lifted it a year later. Ugandan civil society organisations working to counter human trafficking said the ban and its lifting had little impact on trafficking dynamics. They questioned the benefits of exporting labour and highlighted the failure to safeguard those undertaking labour migration.

Regional bodies such as the International Organization for Migration, UNODC and European Union have often called for a stronger regional approach to trafficking. The latest is the Better Migration Management programme that advocates for the prevention, protection and prosecution of human trafficking in the East and Horn of Africa region.

East African countries appear to lack power in negotiations with Middle Eastern countries on trafficking issues. This is because of gaps in their domestic legislation and regional trafficking strategies. Yet other regions that export labour to the Middle East have shown that this can be done.

For example, the Philippines has 23 bilateral agreements with seven countries – most of which are in the Middle East. This allows authorities to oversee the protection and safety of workers and prevent them being exploited by trafficking networks and employers in destination countries. The labour export sector makes up a very significant portion of the Philippines gross domestic product, yet it also comes with challenges and is not an economic cure-all.

East Africa needs to learn from approaches elsewhere that prevent trafficking and protect workers. Until more robust responses are in place, trafficking and exploitation are likely to grow in the region. This perpetuates the vulnerability of poor women and girls and undermines the prospects of labour exportation as a livelihoods option. DM